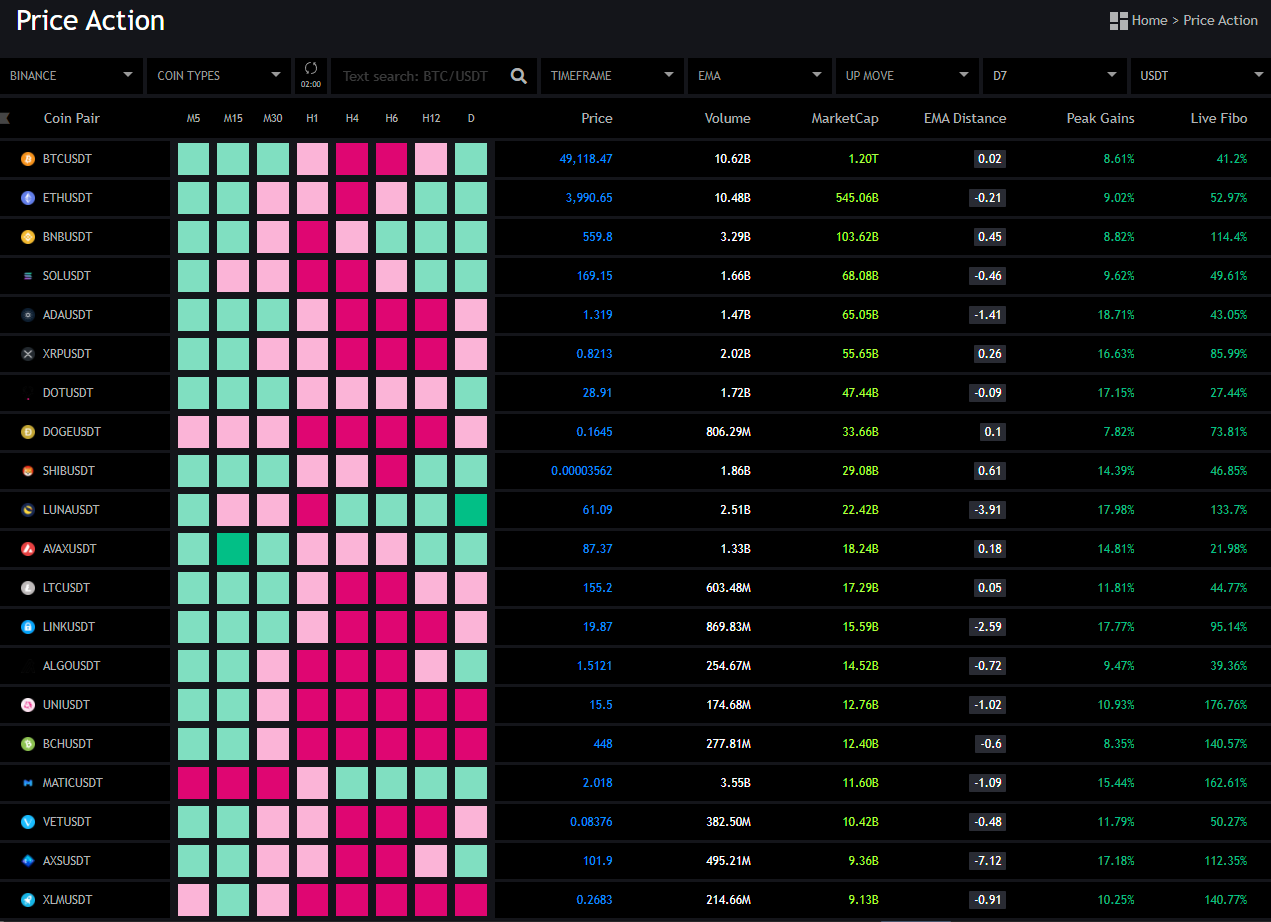 Not a lot of Green candles to be found on any Weekly charts for last week.  The price action lately has been a slow and steady bleedout as opposed to a cool off.  That is unfortunate but also fairly standard.  The real question is – what’s next.  Is the bleeding just a downward trend that is nothing more than a slow and methodical pullback before another leg up or is the bleedout the beginning of a year long Bear Market.

Unfortunately, when the major move is made, it’s already too late to scramble positions.  This only adds to the price action we see everyday.  Every hour is the breaking point for another trader who finally says he’s closing all his positions until the market shows a clear direction – that just means more sell pressure.

There were only a few standouts last week but their volumes were essentially too low to trade comfortably.  They can be traded but their risk factor is so high that your position is likely reduced to 25% of a normal position.    Longer term swing trades were added to the list with coins like AVAX, FTM and SNAD.

BTC and ETH topping out the list once again with their 0.89 Correlation.  The two biggest names in crypto are back to the Swing-Dance and appear to be trying to mimic each other once again.  This is strong for the entire market but only when they are bullish together.  It is the equivalent of Crypto Apocalypse if they trend together downward.

Alts with lower liquidity will speed run themselves to Zero while every time ETH tries to go down, traders mistakenly buy it only because it seems to be moving slower than their alts.  Then the Big Candle comes in and everyone gets rekt.  Let’s hope next time is different

Fear has eased up from a 16 (Extreme Fear) to a 28 (Fear) over the course of the last week.  This may be due to the fact that the lower levels near $47,200 have been tested now three to four times and each time Support was found.

Bitcoin also had a pretty good weekend but we all know weekend price action is more or less useless when it comes to the overall bigger picture of where Bitcoin is headed.

The birds on the wall are chirping and the smell of a rally is in the air.  Does retail have the power to push the market before Christmas?  We shall see. 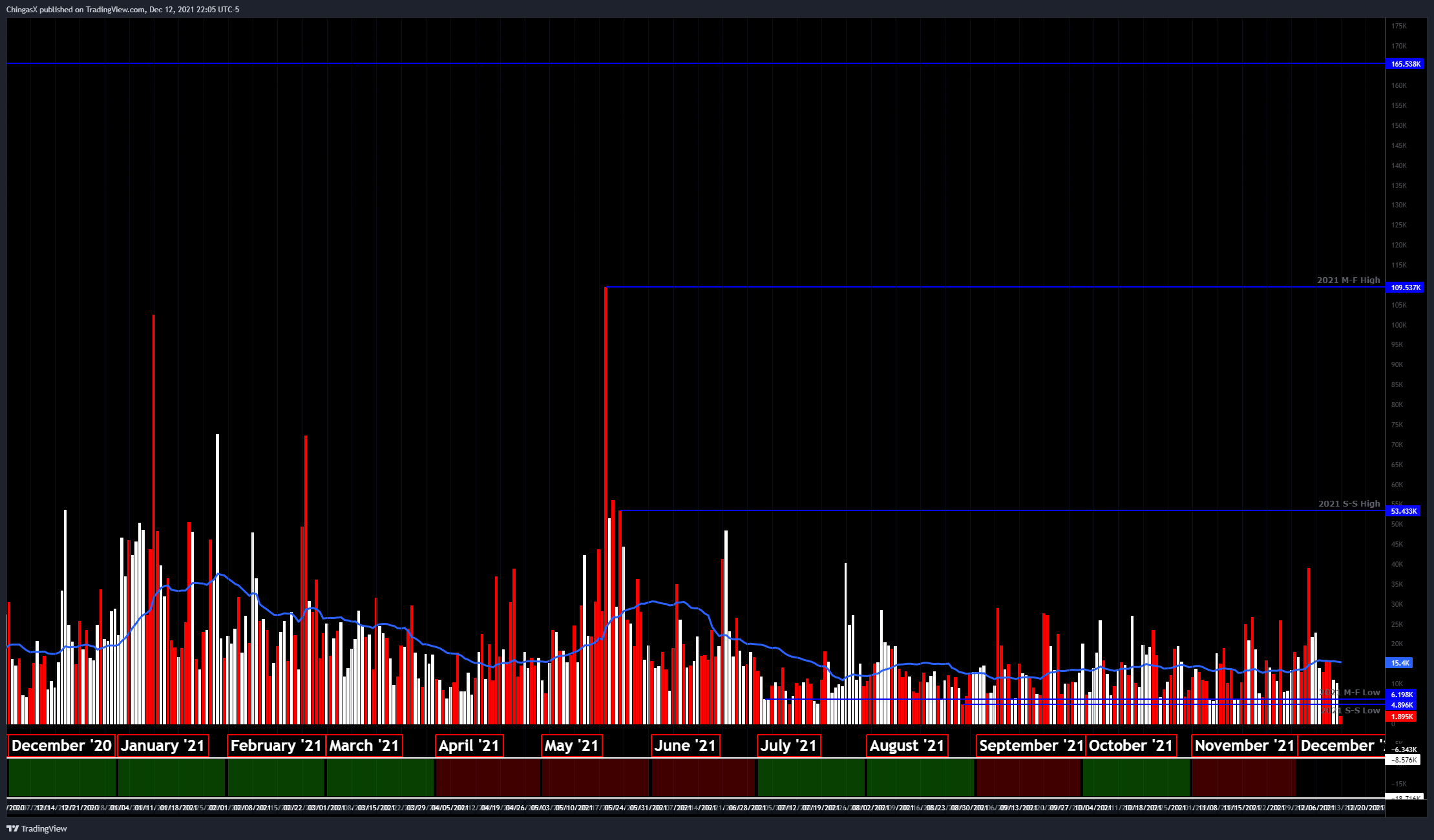 Weekend Volume was better than normal but the real stars were during the week and unfortunately, they were sell off candles.  On lower timeframes Bitcoin is more or less ranging but on the daily we simply do not have enough candles to make that call yet.  We saw a slight increase in volume two weeks ago and last week was more or less keeping those levels in a plateau as opposed to growing them at all.

Outside of any major rally or any major selloff, volume is likely to stay fairly consistent over the next few weeks. 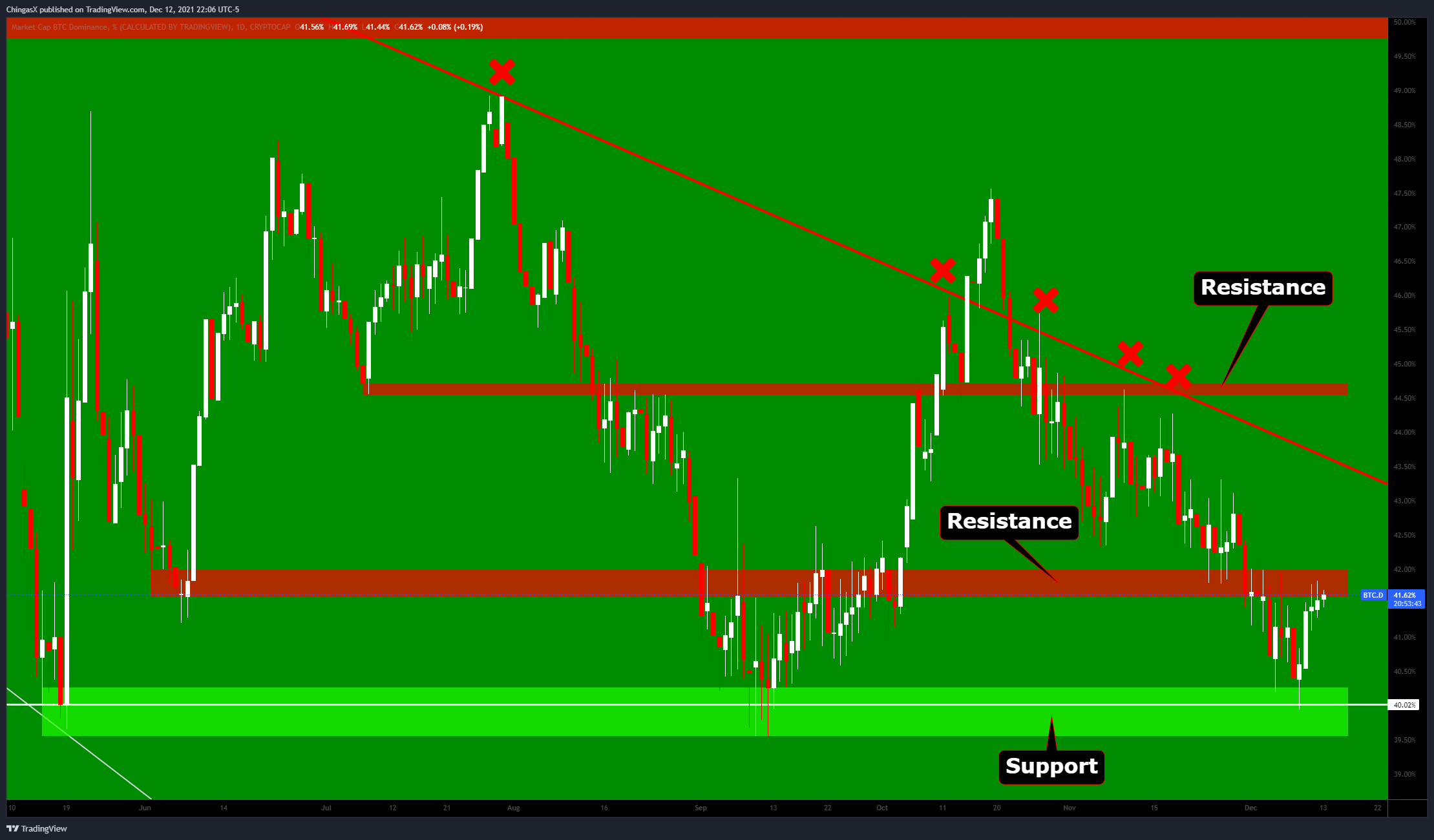 We spoke about Dominance Support at 40% and Dominance Resistance at 41.5 – 42%.  Those levels remain consistent.  40% was indeed tested and it also found Support.  The bounce went directly to 41.5% and failed two days in a row.  Today is the third day in that Resistance area and Dominance continues to struggle in that area.

If we are able to see a flip of 42% then we will be looking for a rise in Dominance all the way to the trendline or a horizontal area near the previous local highs. 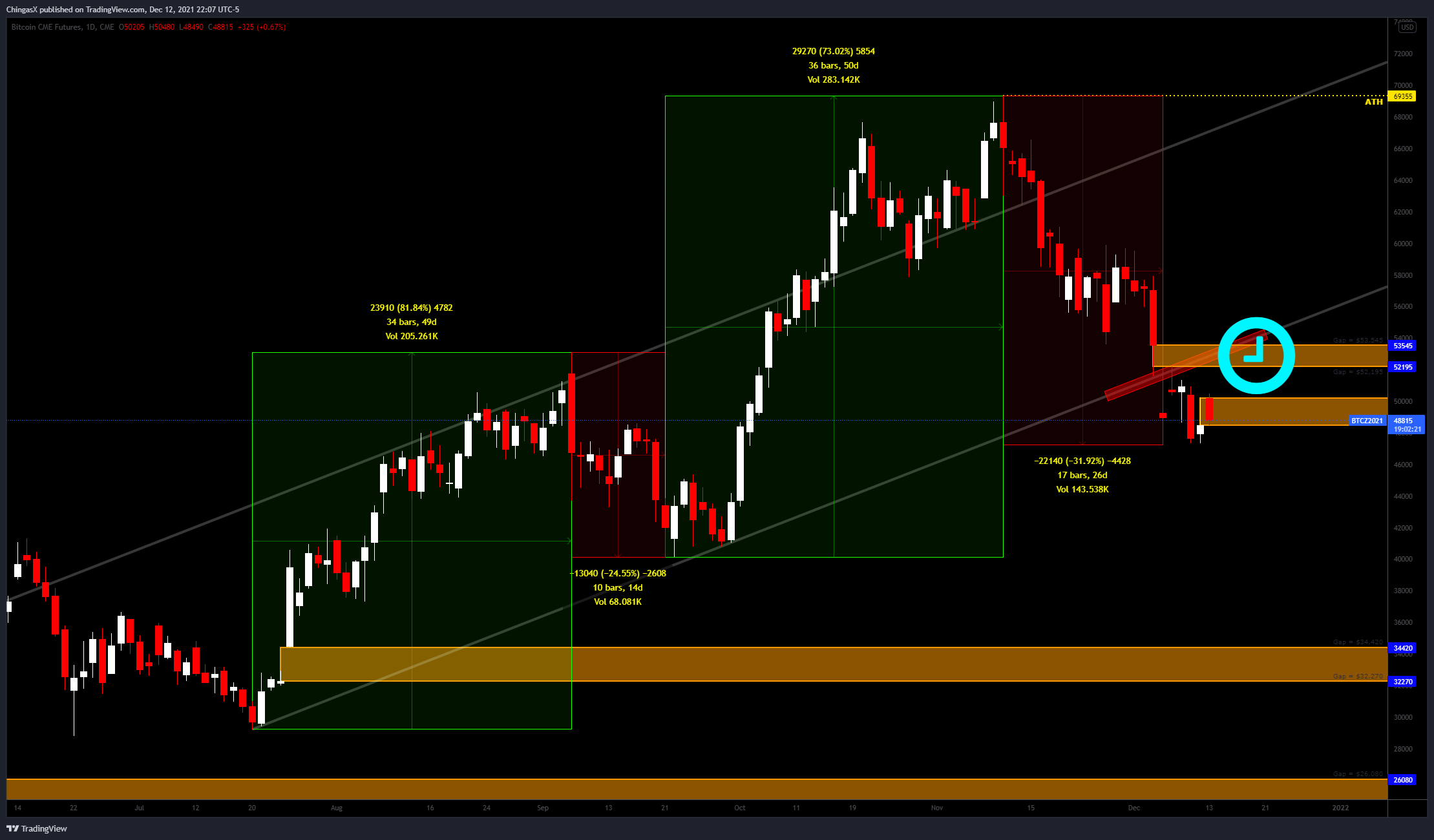 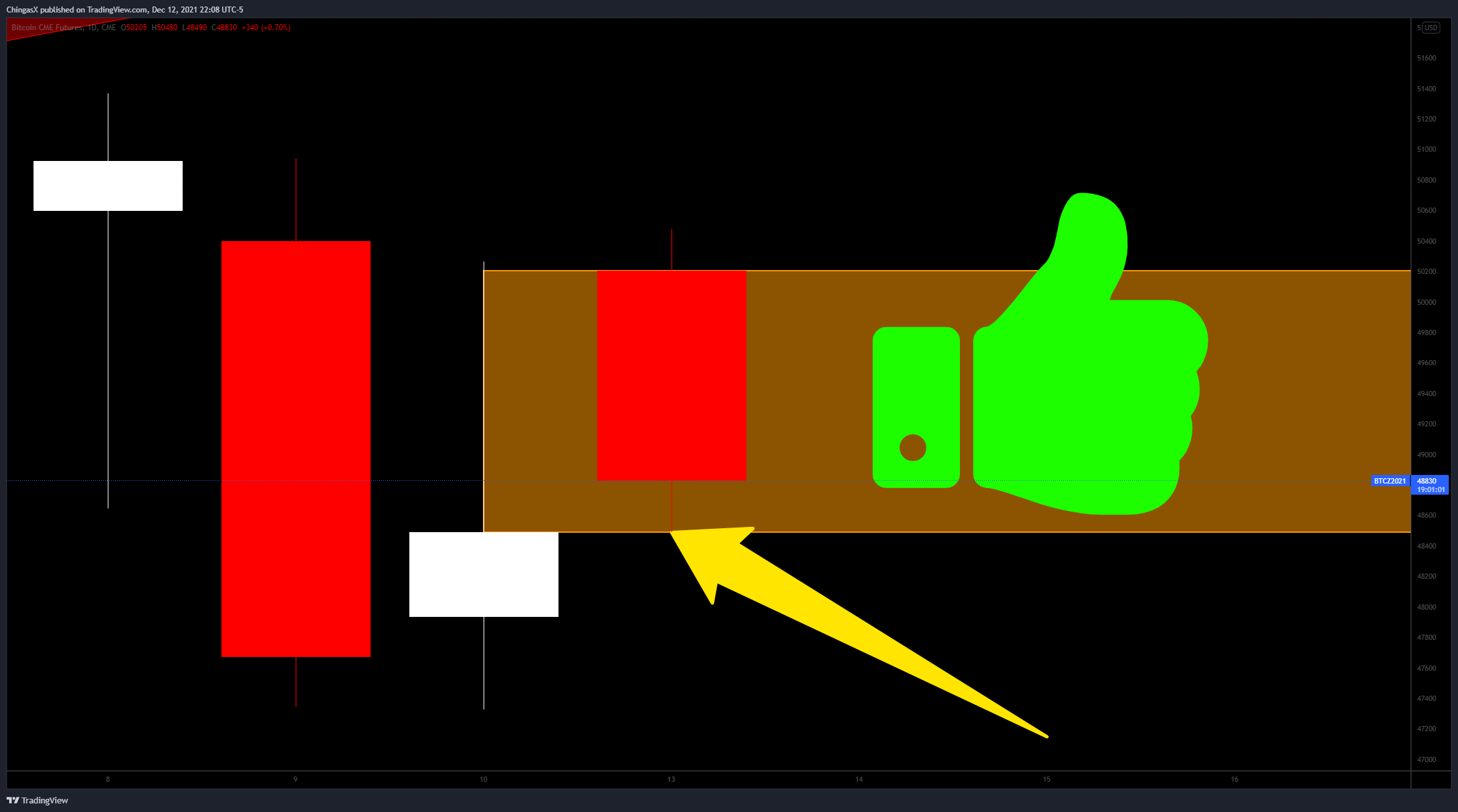 I would be lying if I said I didn’t postpone this Recap until the Gap was filled.  There was not very long to wait.  Almost immediately the Futures Market got to work and started selling off BTC on the open market in order to drive the price down to exactly $48,490 – the Closing Price of Fridays Candle.

As long as they didn’t do too much damage on the way down, they can now look once again to tackling the upper gap that still remains.  $53,545 is the top side of the Upper Gap and the goal of the CME Futures to fill that Gap. 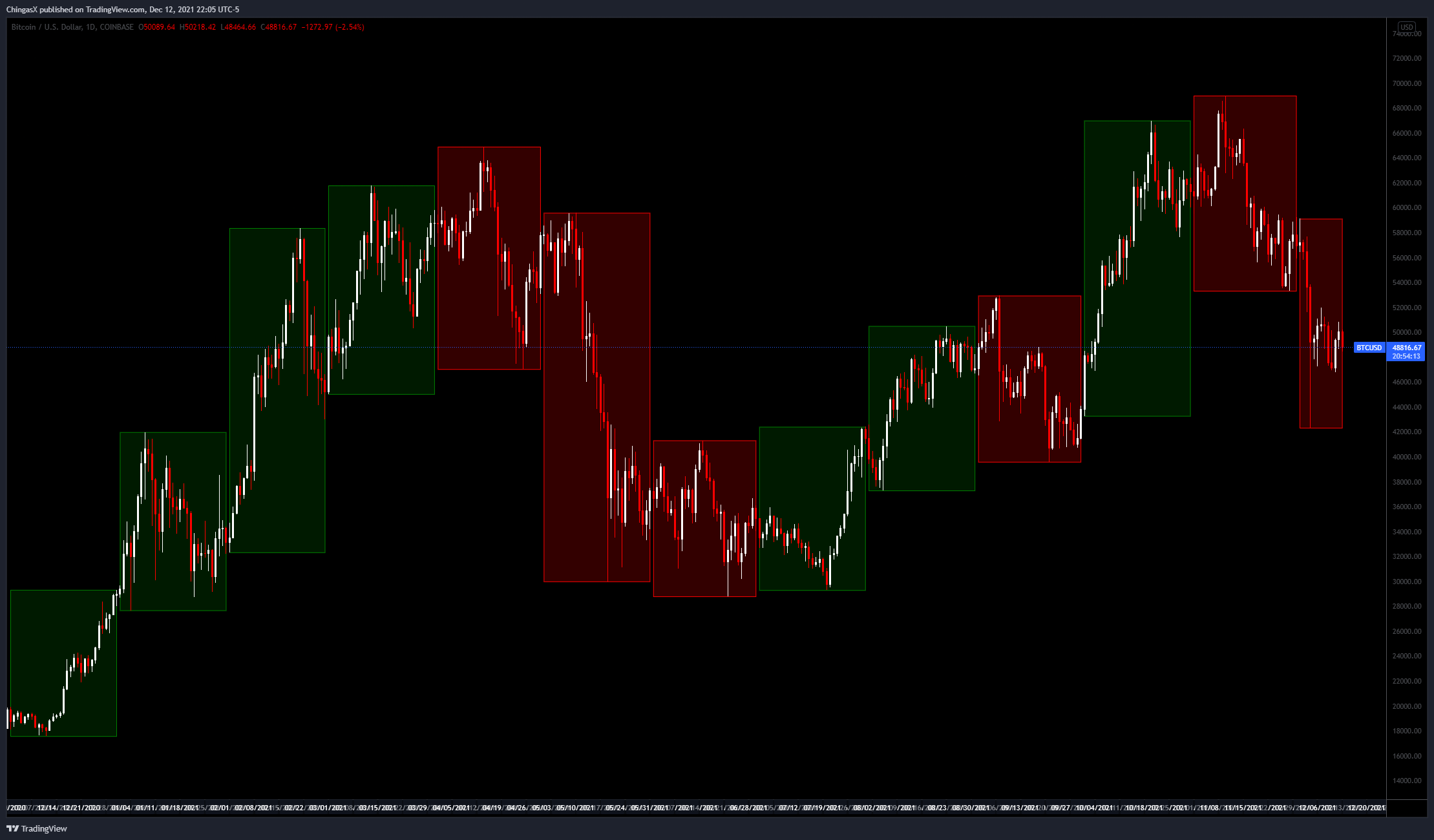 As we can easily see, the larger trend is still intact.  Until we break the low from June, we are still trending up.  That being said, the tradition of a Green November is clearly dead and the beginning of December looks like a fairly deep hole to dig out of.

All hope is never lost in crypto and one massive pump candle can change the entire market overnight.  It works the other way as well.  One piece of terrible news and down we go harder and faster than a few cheap beers at a college party. 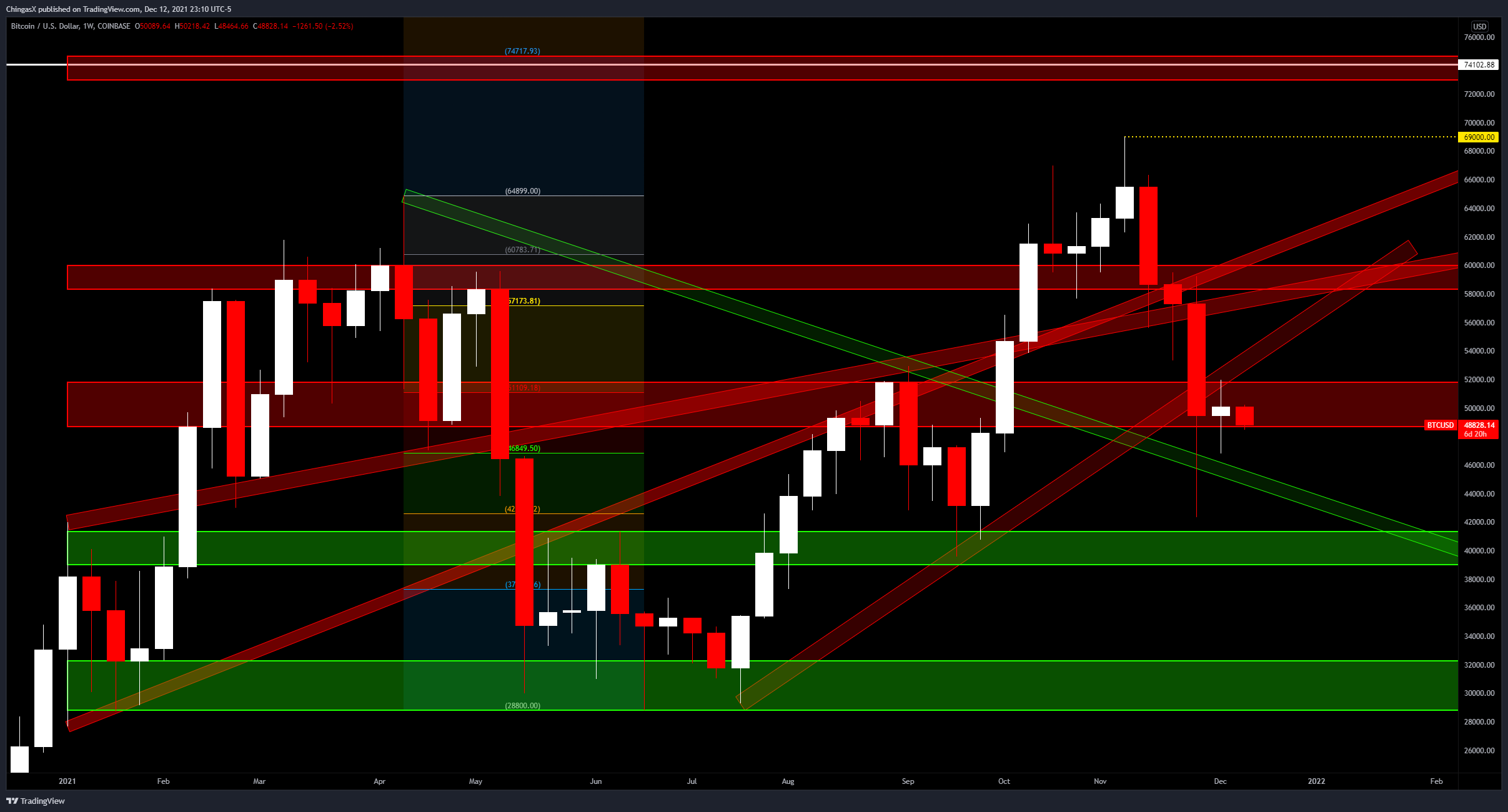 The Weekly remains unchanged as far as Support and Resistance are concerned.  The Weekly candle is called a Spinning Top.  This type of candle indicated indecision in the market and leaves no clear winner between the Bulls and the Bears – we can say they both lost and so to did a lot of traders.  The Spinning Top is a small body with an upper wick and a lower wick that are relatively the same in size.  The lower wick just barely missed support while the upper wick ran headfirst through resistance just to get stopped at another area of resistance in the form of an internal trendline.  $48,800 – $51,800 remains the no-mans zone but is clearly owned by the Bears at the given time.  The Bulls would need to flip this as support if they want to avoid another bloodbath. 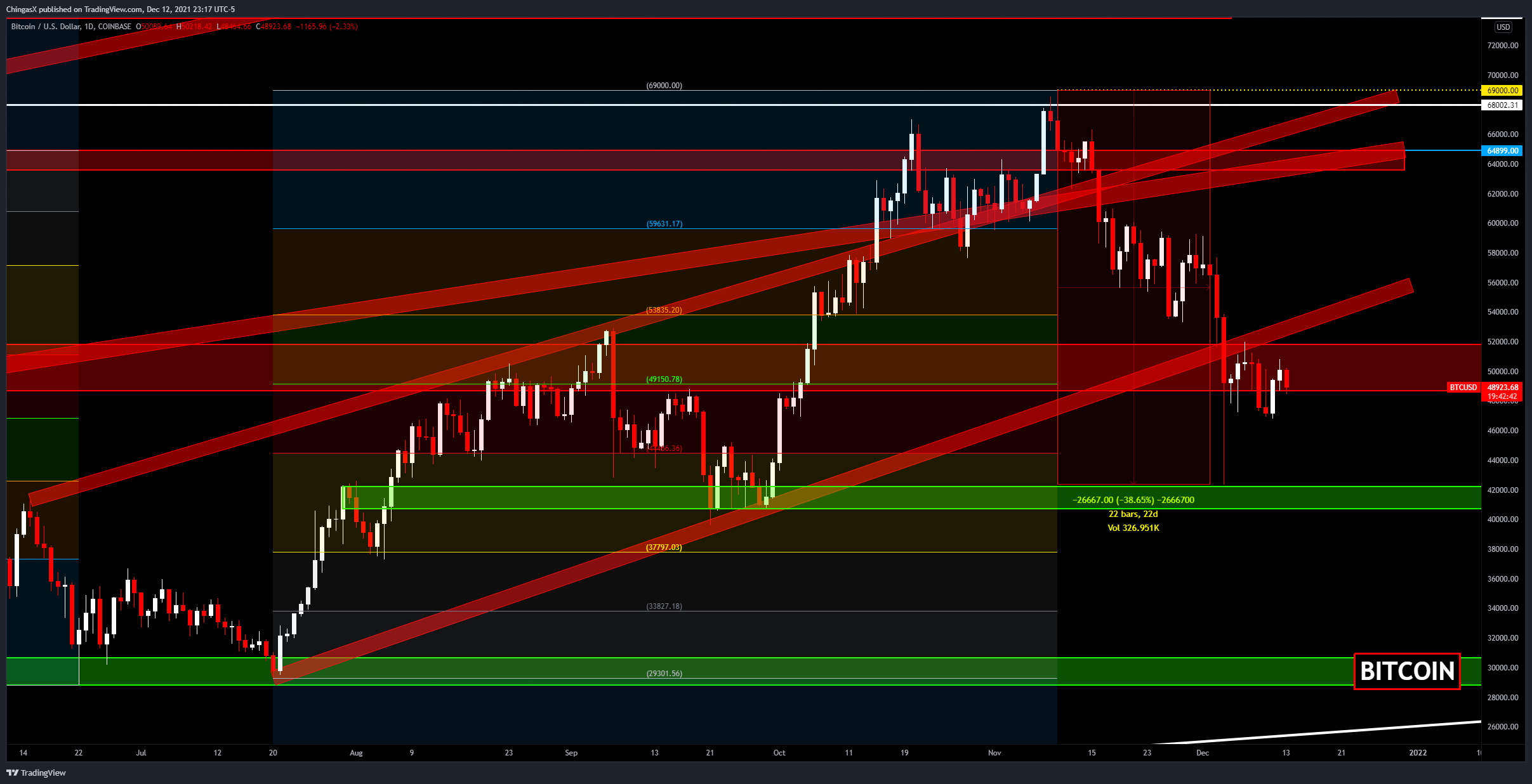 Today is Day 10 for Bitcoin in this Zone.  Not enough to call sideways range but long enough to know that the next move will likely be a big move – Up or Down.  The Daily trend on the local is 100% down.  This is quite clear from the ATH at $69K and the recent low at $42,333.  All things considered, Bitcoin lost almost 40% from the top and that really isn’t even that big of a deal.

There are a lot of traders and investors that I hear from that are still very Bullish.  The break of the upward sloping support is the biggest concern.  Although it was not a validated level of support – the retest more or less made it relevant.  So, for the Bulls, trading back above that upward sloping trend should be the focus this week.  We all know holidays in America are coming up and that means less eyes on the charts, less hours trading and less overall volume from American traders.  This would likely be the week if they are planning on doing anything with Bitcoin in the near future.