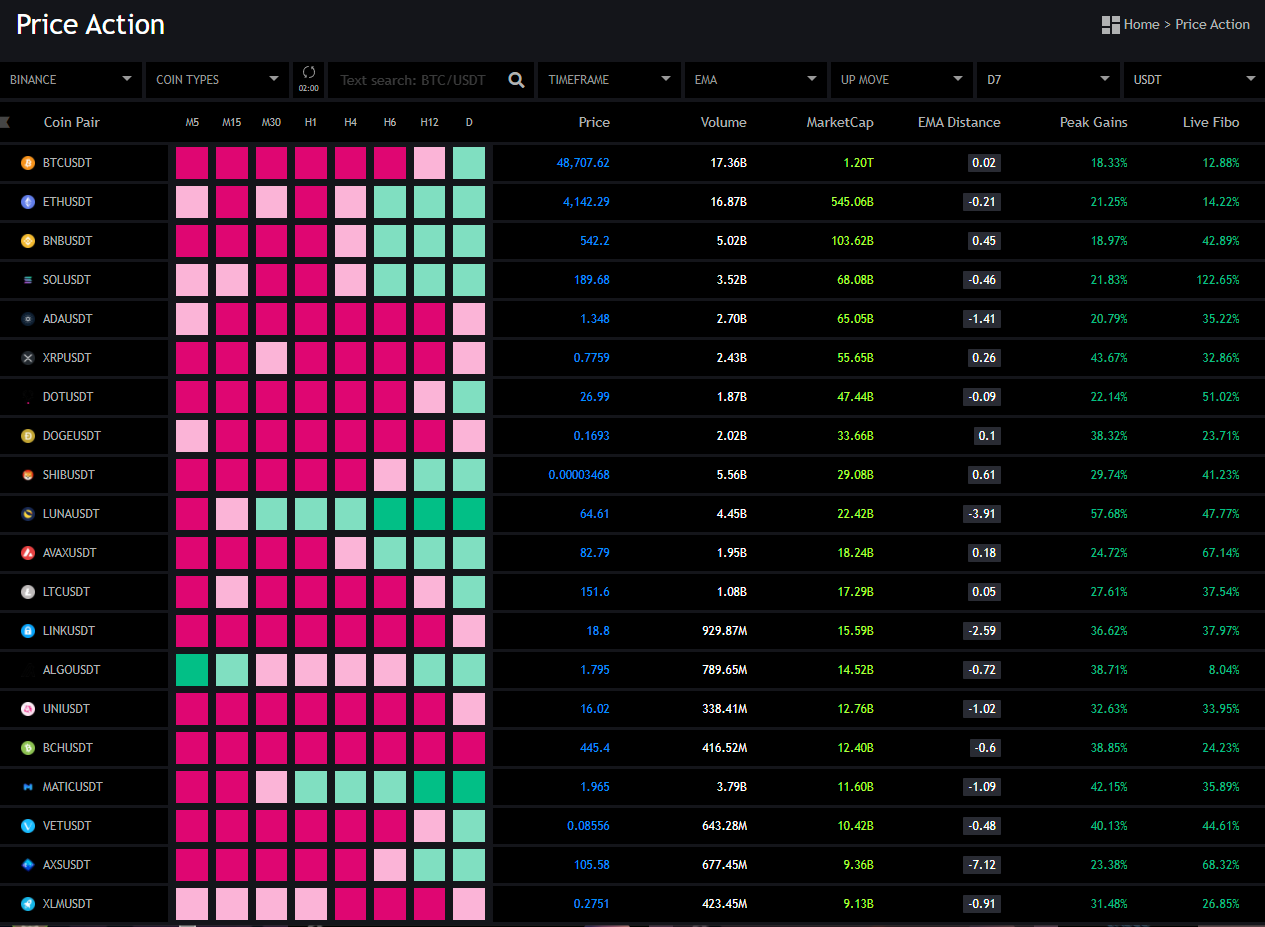 Oh what a week it has been.  There Bears were hungry this week and to say they had a good feast would be an understatement.  The Bears obliterated everything in its path.  Support?  What is that?  The Bears ate and ate every buy order all the way down line.  Of course, this was not just Bitcoin.  This was just about every Crypto on the planet.

20-40% drops were normal across the board.  A few Billion Dollars just in liquidations across all leverage markets.  The fireworks were real and the drop was aggressive.  All of this started Friday night after the CME Futures closed and had already filled is local downside gap earlier in the day.  Then Saturday was more or less a bloodbath as soon as the candle opened.

We saw a Peak Drop from HOT register over 80% and CTX skyrocketed upward 581% but then dropped 71% when Bitcoin got hammered.  NULS dropped 67% but it also gained 261% prior to the drop.

Litecoin has become more correlated with Bitcoin this last week and its currently registering a 0.90 on the correlation scale.  Bit of a shame to only correlate with Bitcoin when Bitcoin dumps.  Needless to say, Litecoin did not do very well this week.

In another piece of unfortunate news, LINK is now an 0.89 in correlation to Litecoin.

The FEAR is real my friends and the Index has dropped 50% from where it was last week.  We are sitting at Extreme Fear, which is a 16 on the scale to 100.  Last week we showed a modest Fear of 33.

If the opportunities present themselves, FEAR is generally where you want to buy.  Scared hands will bail on positions and you will jump in when there is some kind of reversal top look at. 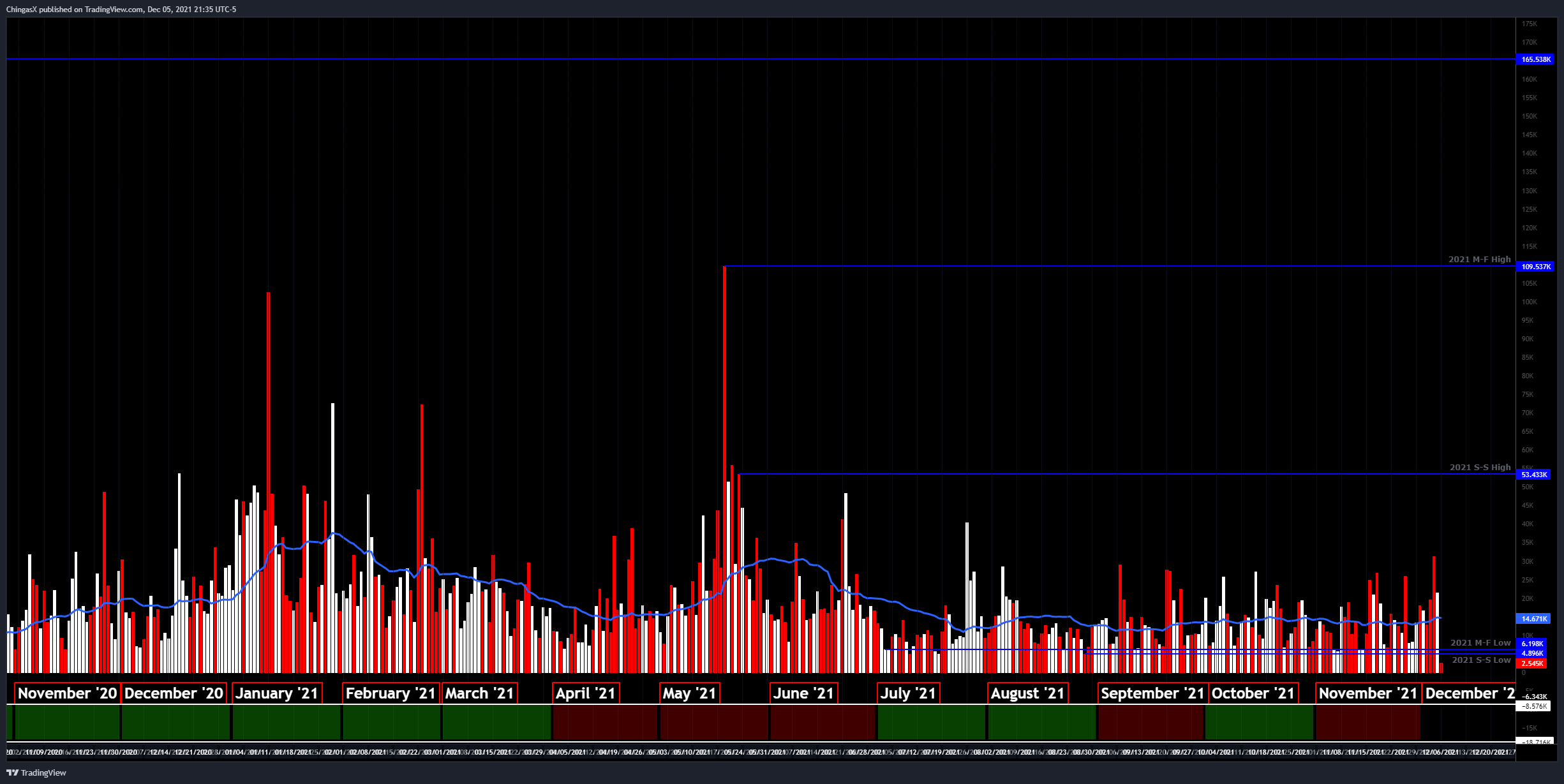 Saturday saw the biggest weekend volume since May of 2021.  Volume helps to confirm the move and confirm the direction.  This is generally the case.  However, when you have a massive wick to the downside or a black swan type of event, you need to look past volume.

This event was a liquidation event.  Could be the last great shake-out before further upside or it could have been the last great entry for the Whales.  It can also be the first major confirmation that the Top is in.  A lot of different ways to read what we saw.  What we know is that there was a ton of Bitcoin traded that day. 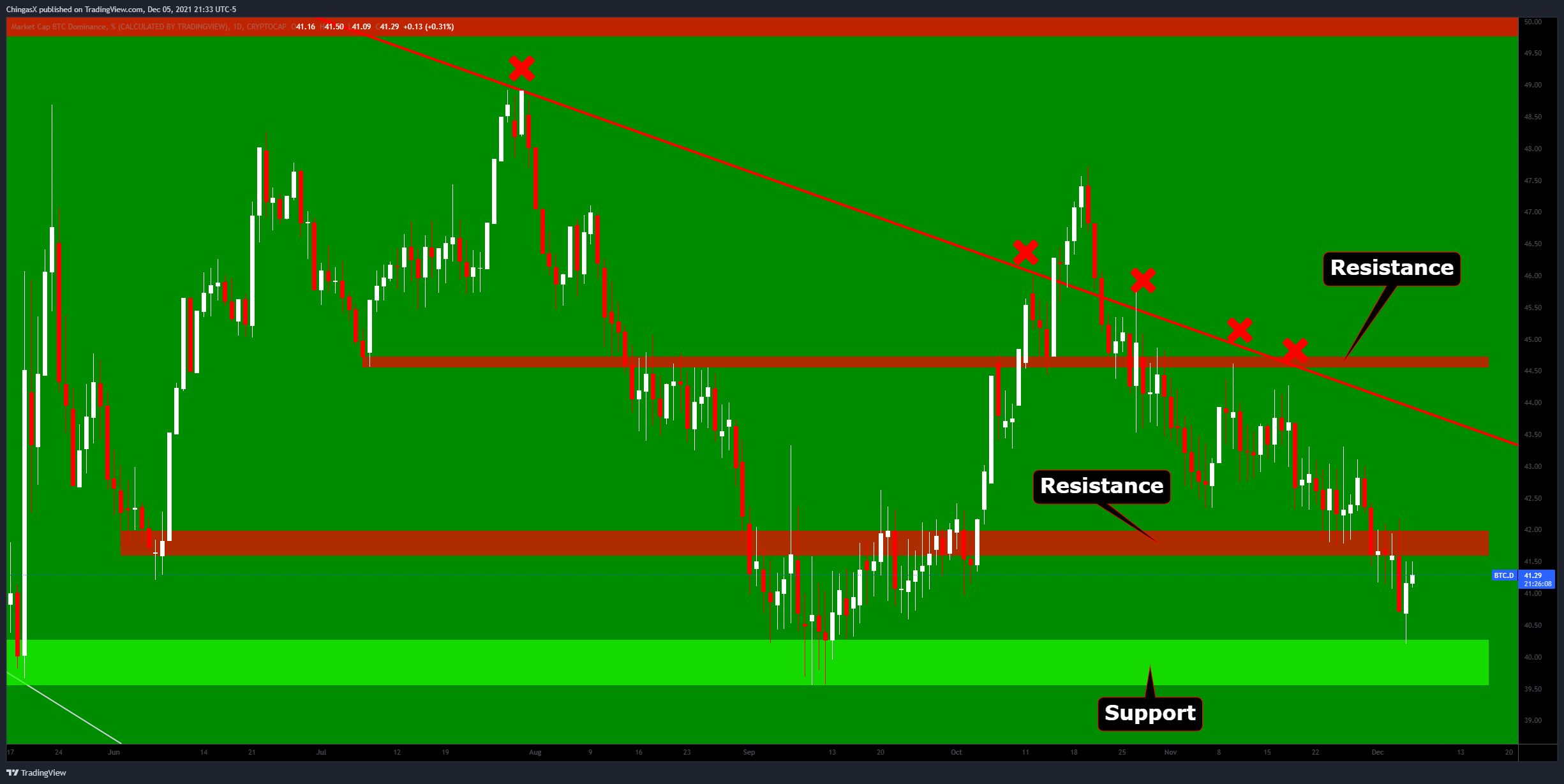 Over the week we saw Bitcoin Dominance sit at the lowest it has since September.  This area was acting as support back then and has stayed true to that description thus far.  Our previous area that was once support was successfully flipped to resistance.  The idea would be for the Alts to go on a run if the Dominance breaks Support. 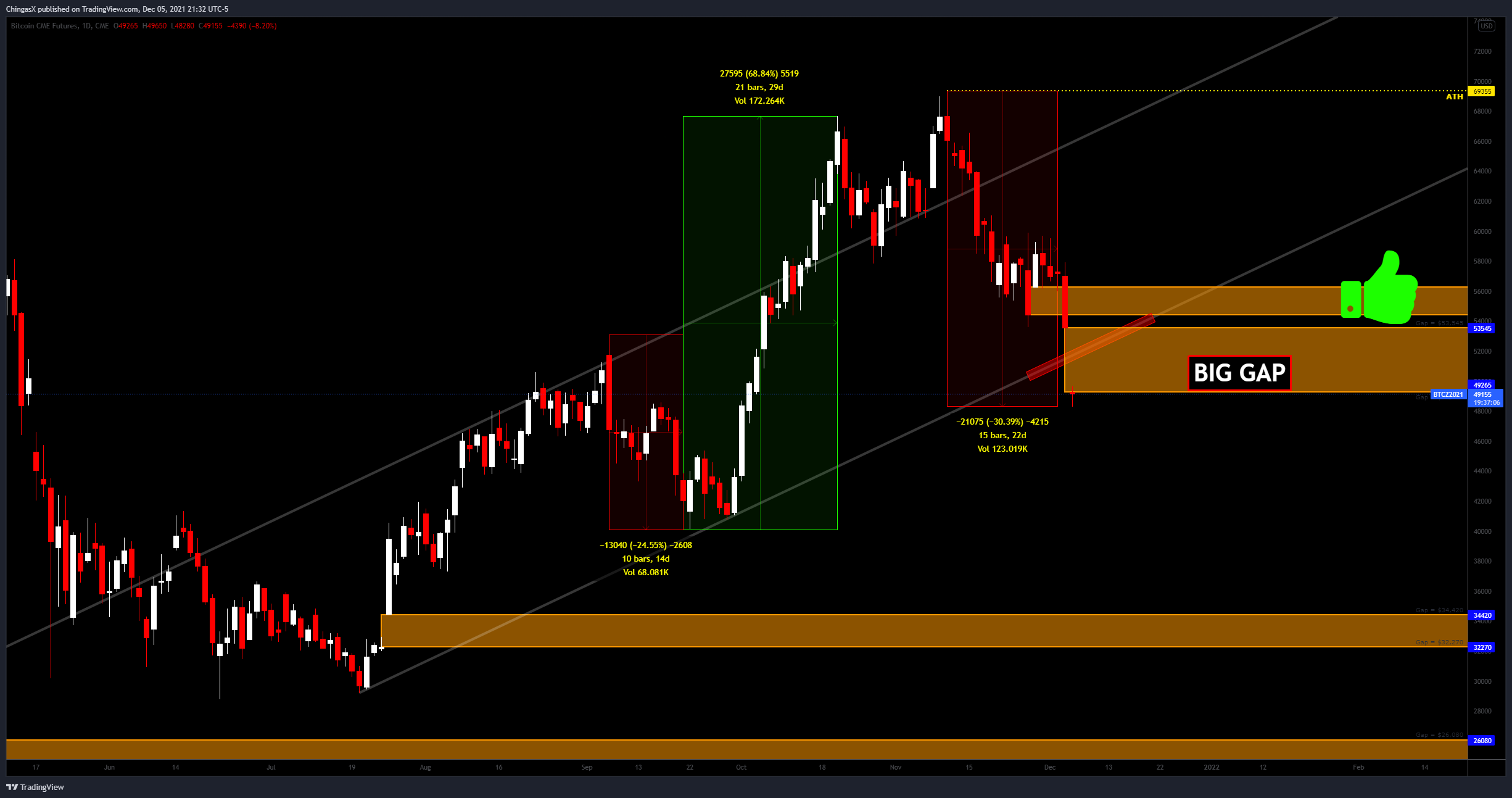 The Lower Gap was filled on Friday and it was no small gap at all.  Now Bitcoin has a huge upper gap as the big drop for Bitcoin that was started on Friday happened on Saturday after the CME Futures market was closed.

As always, we expect this Gap to get filled which means we expect to see Bitcoin trading at $53,545 before too long. 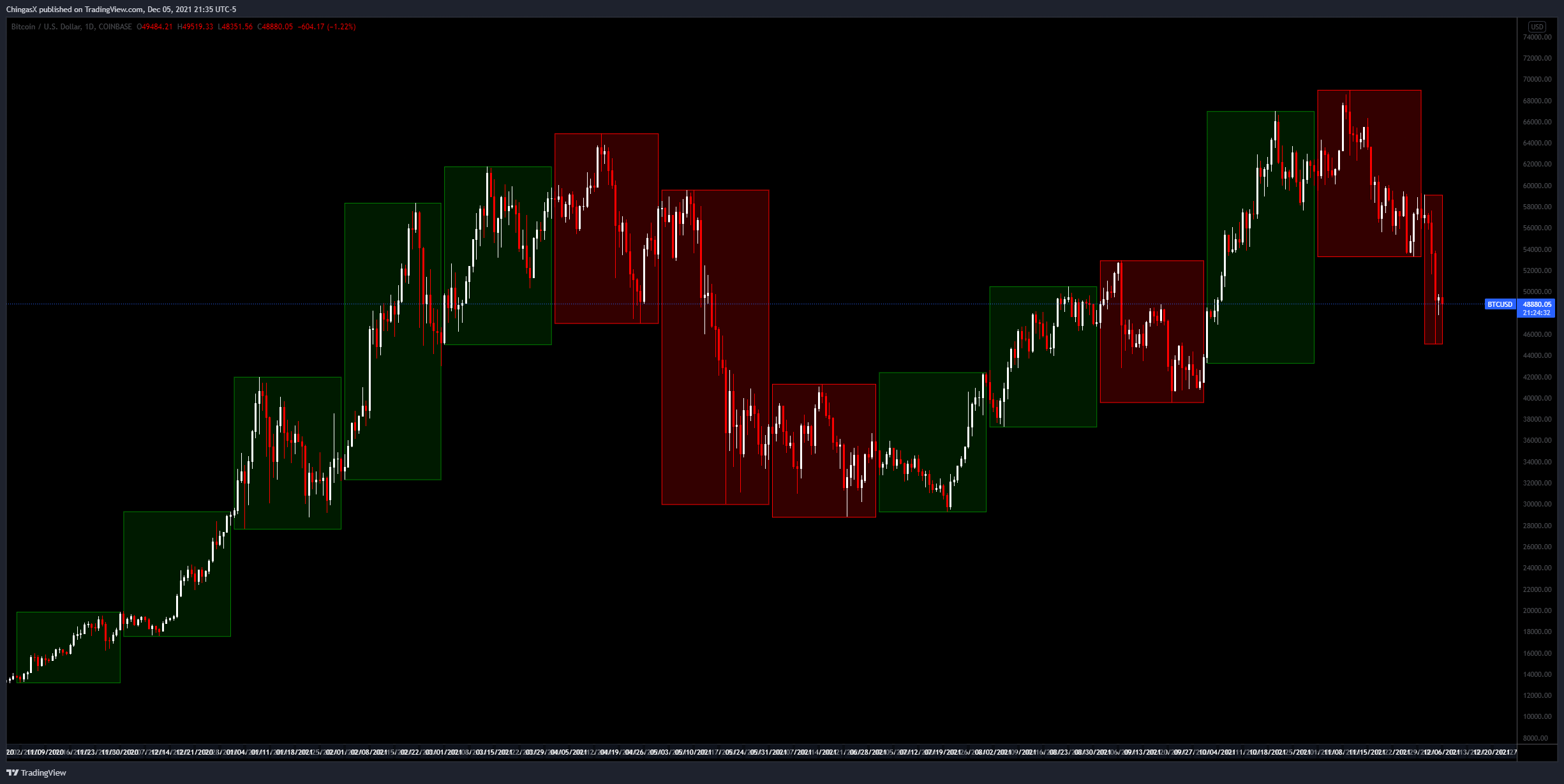 The month of November was Red.  November started hot and then completely died.  December so far is starting Red Hot for the Bears…

Clearly too early to tell how December will shake out but we know it has a long way to go just to break even! 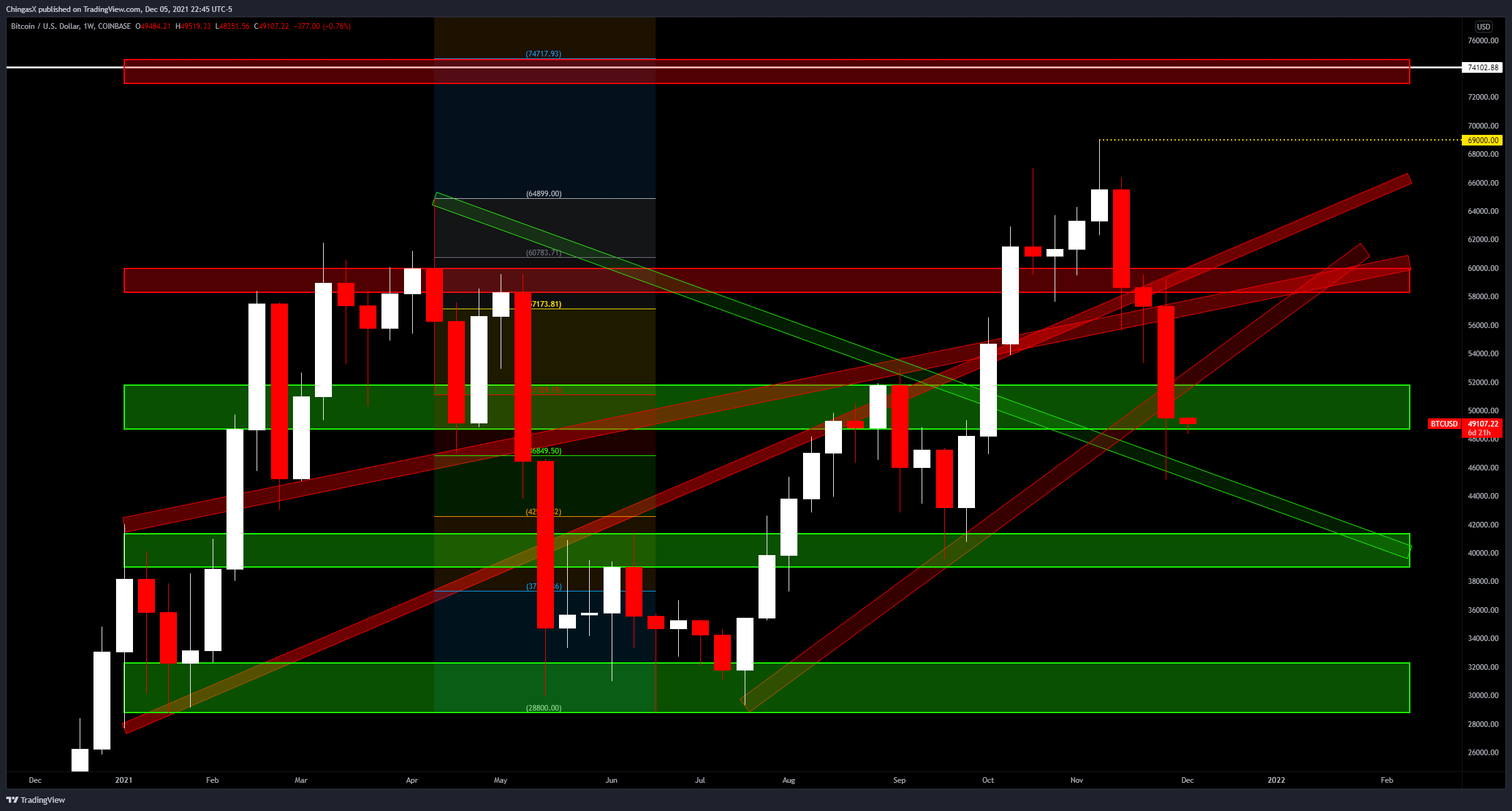 The Bitcoin Weekly Chart has turned from a lot of Green for Support to a lot of Red for Resistance.  The Big band of Support from $48,700 to $51,800 is holding Weekly closures at the moment.  Last week was able to save a dramatic candle with the Buyback that happened after the initial drop.

That being said, previous weekly trend levels were breached before validation.  This does not mean that it won’t work as resistance but it puts less confidence in the upward sloping resistance level at the moment. 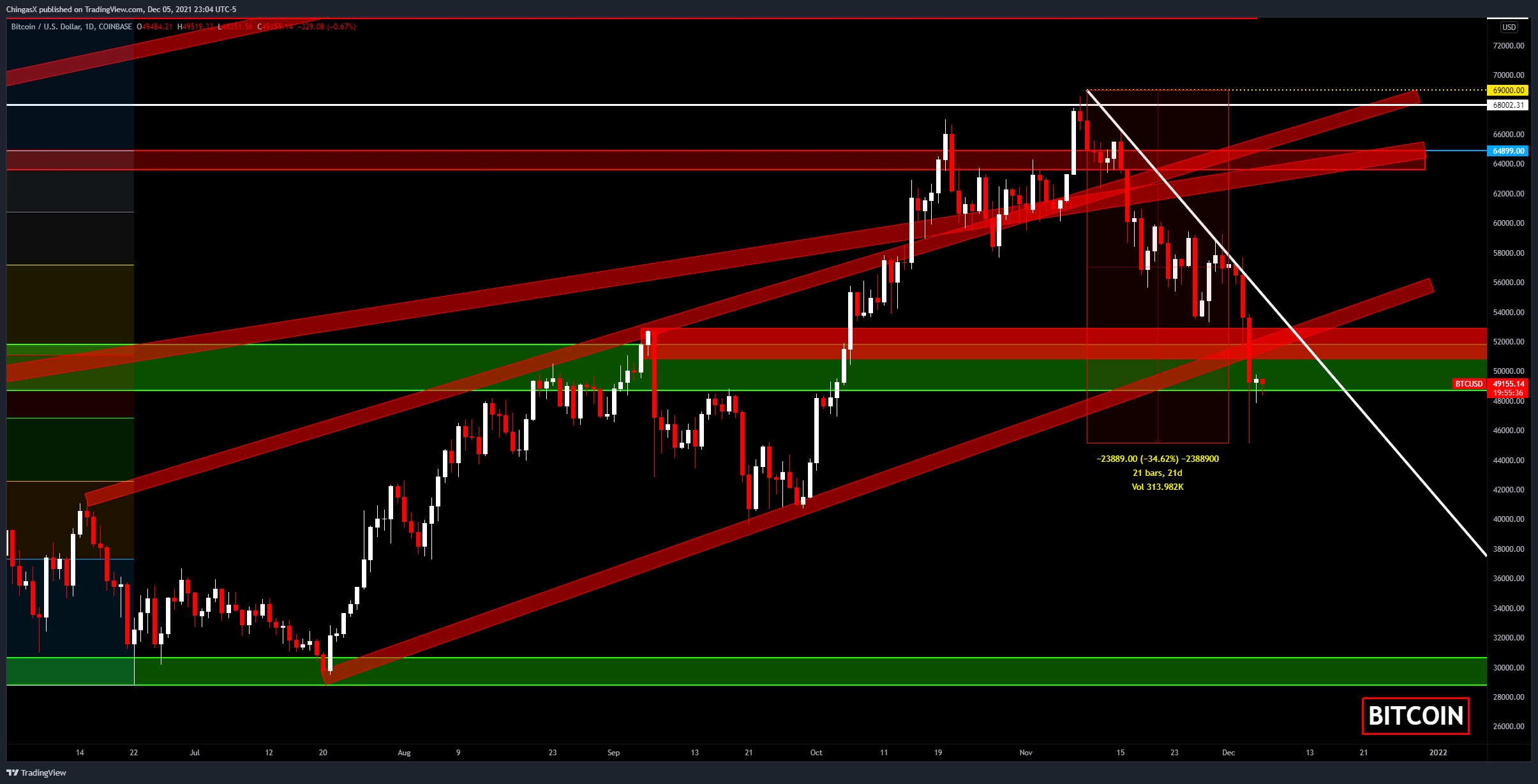 Earlier this week Bitcoin was trading at a peak low of 34.62% from it’s ATH.  Some things in crypto simply never change and a big ol Bitcoin dump is just par for the course.  Bitcoin was able to get a liquidation pump on the low side but wicks like these are generally filled.  That means that further downside would be expected over the next few days to fill out that wick and allow the Buyers to actually buy those areas.

Just as often as wills getting filled – Gaps tend to get filled on the Futures chart fairly regularly.  We now have an upper gap that lands Bitcoin all the way up to $53,545 just to fill it.

We are currently trading in a rather wide Support Zone and it would not surprise us at all if Bitcoin were to become rangebound after such a large move down.  If that is the case, the Alts have another chance to pump one last time before the death spiral takes full effect and we fully embrace a Bear Market.  Now, Bitcoin has the ability to use the downward force as local reversal and come through with a rapid local rally but we need to see what happened when the traditional market gets going in just under 12 hours.