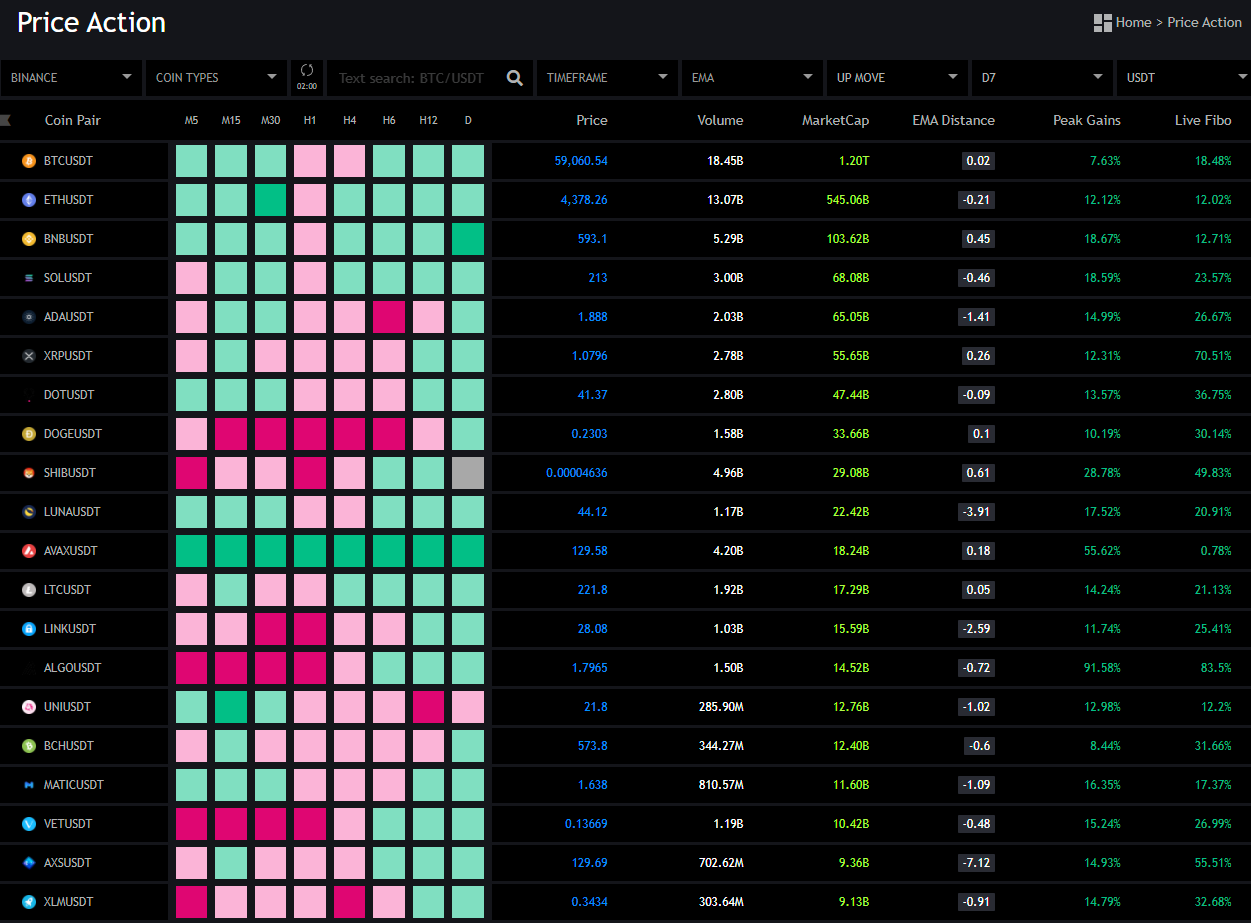 It’s been another wild week in Crypto and certainly not to anyone’s surprise.  Week after week there is some standout and this week was no different COCOS stole the show when it did 1000% in just a few days.  DOGE, SHIB, ALGO, VET and XLM are just a few that had a pretty rough week and are currently sitting at double digit downside moves since this time last week.  AVAX and CRO were the only T-15 Coins to post gains from 7 days ago.  GALA, MITH, DREP, and DAR all had some really impressive moves over the week but again, nothing beat out CRONOS.  As is usually the case, MITH was not only in the top gainer’s category but also in the Peak Drop category as well.  Also on the drop list were LTO, ALGO, MBL and KP3.

We have some really interesting numbers to look at this week.  ETH-BTC is sitting at a 0.92 – which is unfortunate because they are both doing poorly at the moment.  ETH is also unfortunately dragging other projects down with it.  ETH-LINK is a 0.87, ETH-DOGE is a 0.85, ETH-ADA and ETH-LTC are both a 0.84 and ETH-XRP is a 0.83.

The Greed is dead for now and it shows.  The impact that Greed had is fully under effect as we saw major players post double-digit losses over the last 7 days.

Now we sit at Neutral which means opportunity for the lesser-known coins.  These coins are susceptible to Pump and Dump schemes as they are rarely traded with any major consistent liquidity. 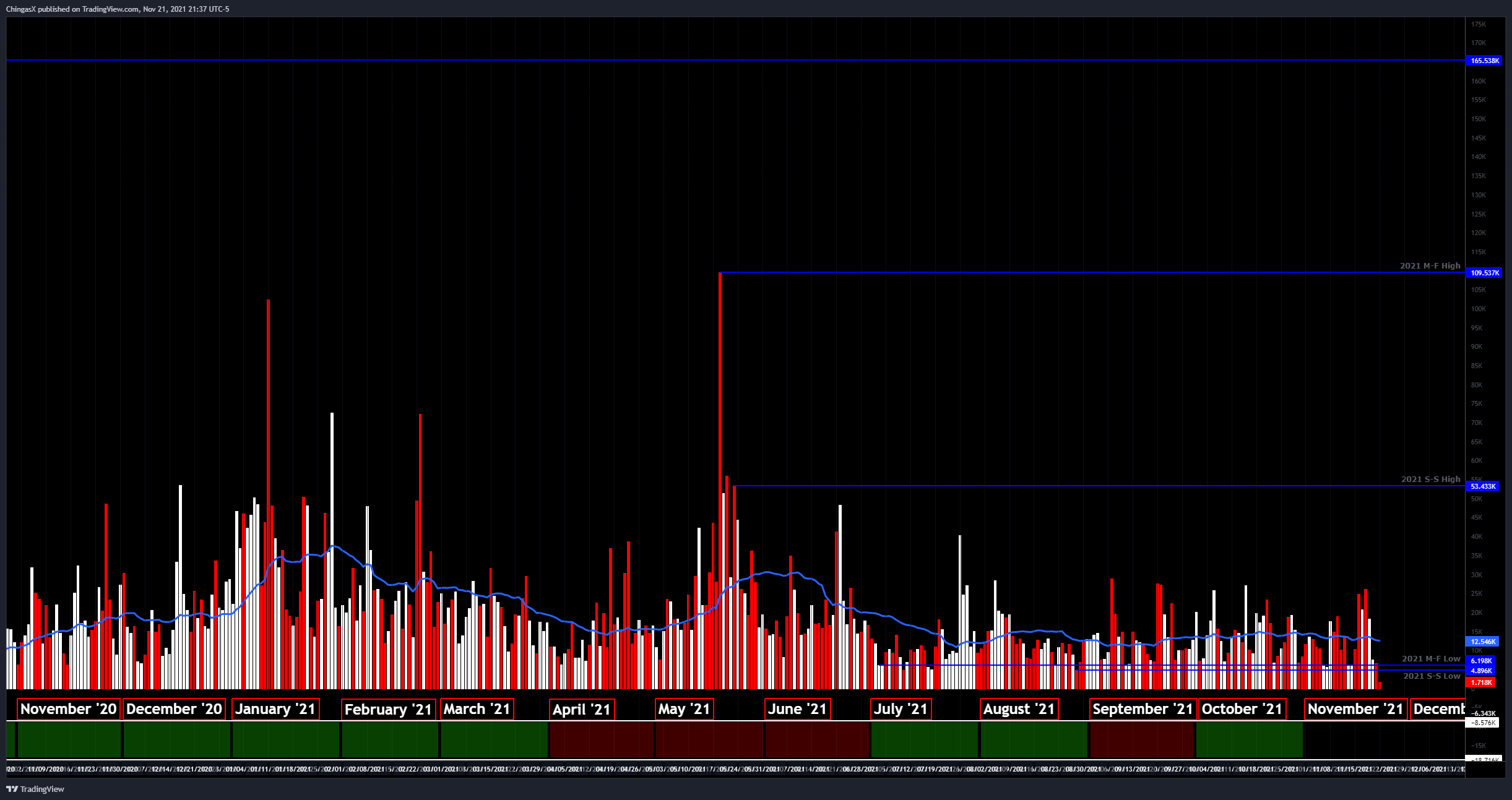 Tuesday through Friday actually saw some decent volume that was similar to Weekly Highs going back to August.  Two of those days were Buy Days and two of those days were Sell days.  Regardless, the overall average volume is relatively unchanged.  The Average is sideways at best and potentially even slightly sloped to the downside. 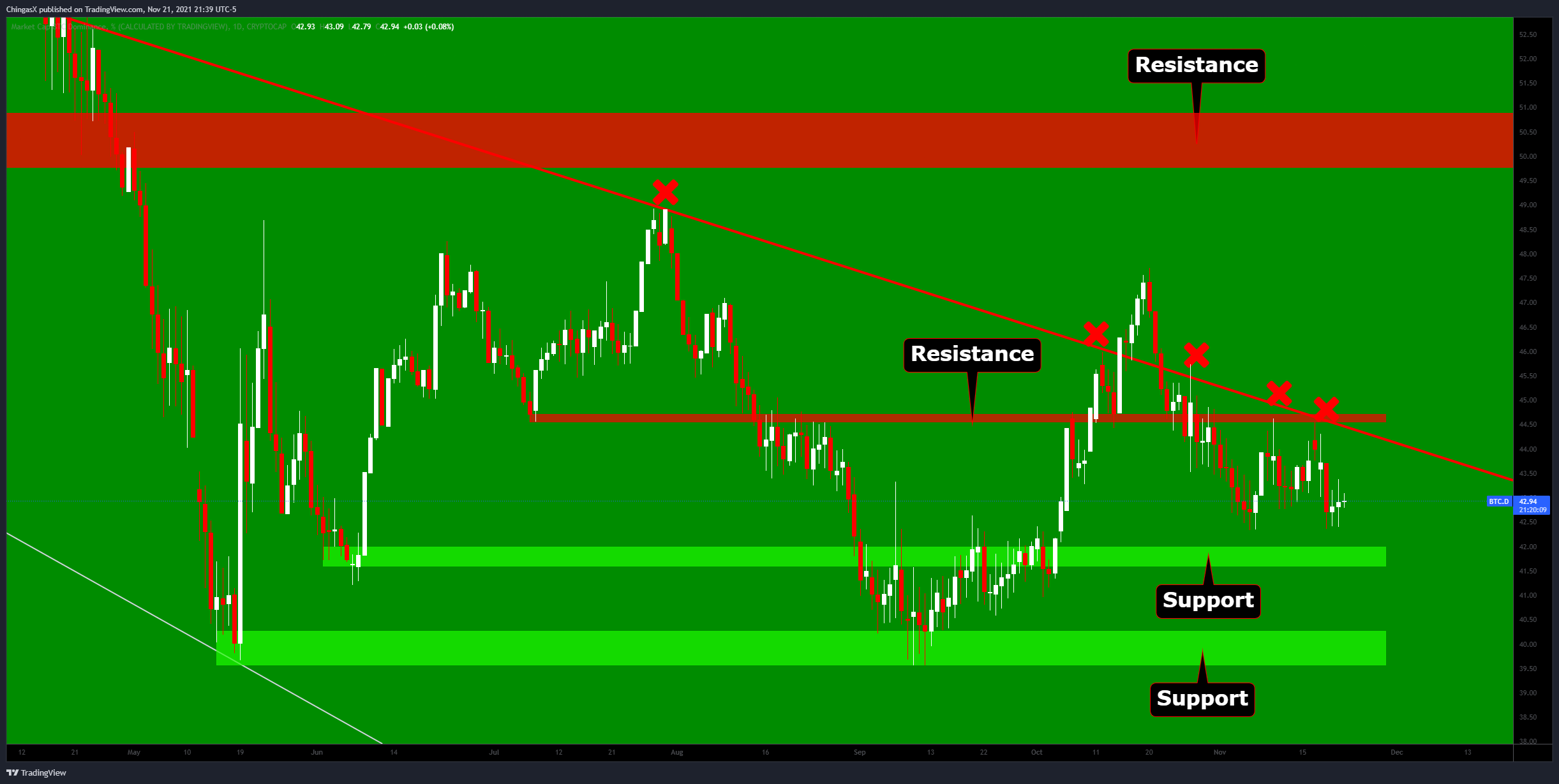 Dominance took another stab at the downward sloping trendline and lost once again.  This goes to show that the next time Bitcoin is able to break through that trendline, we should be able to see a power move in Bitcoin while the rest of the market suffers.

As of now, more of the same.  It may be time to break 42 to the low side and finally see some action across the board. 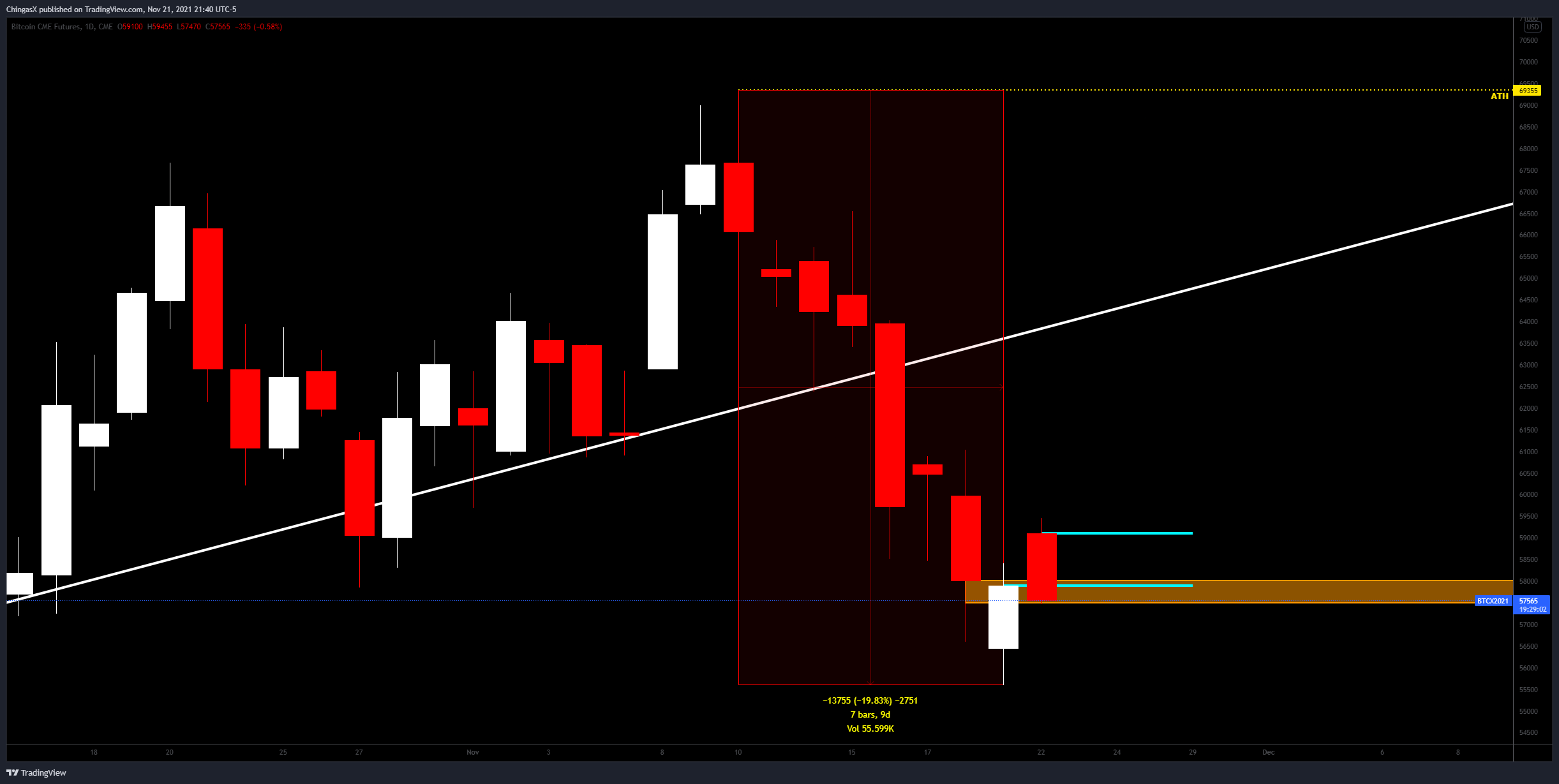 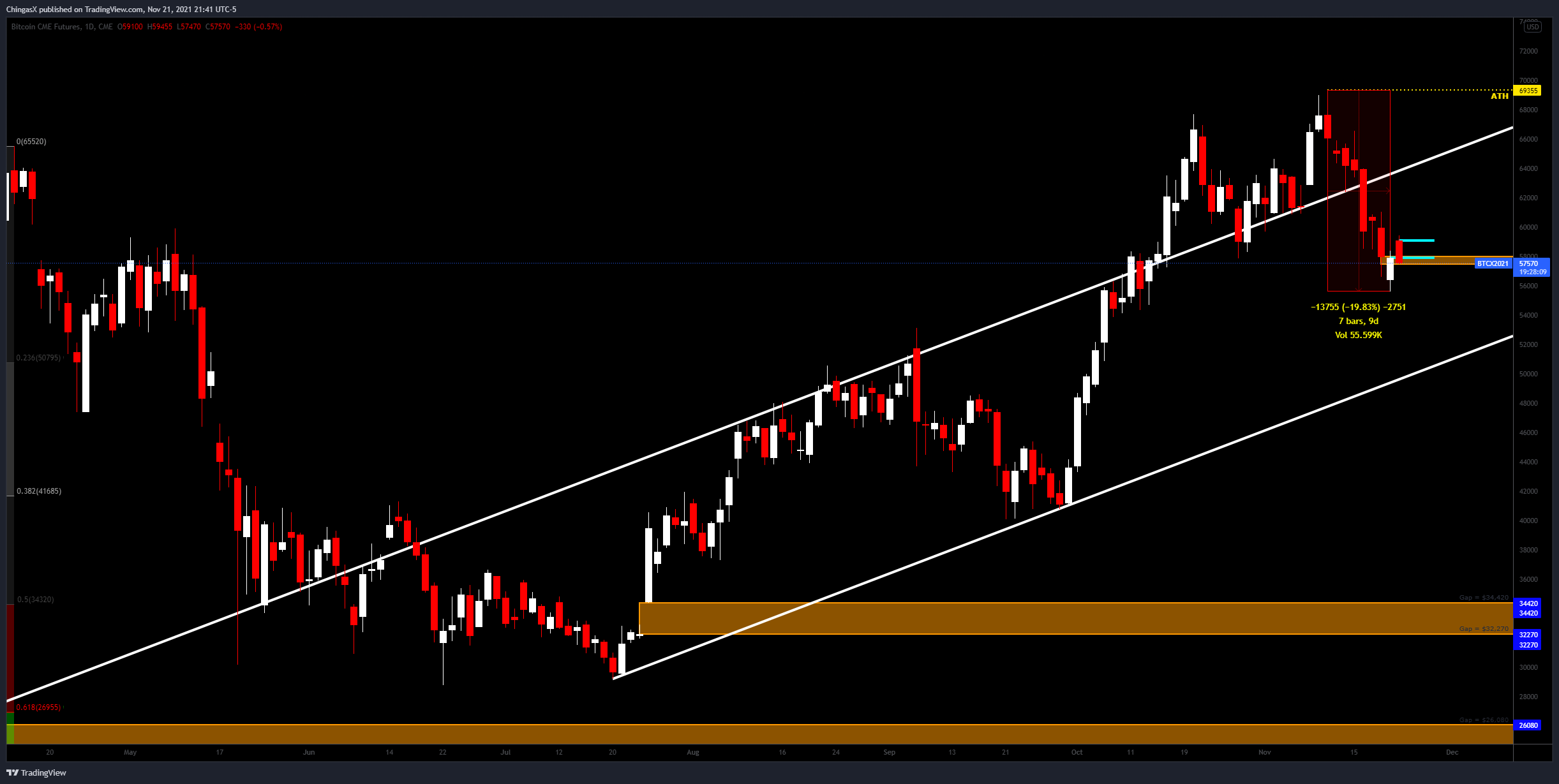 As we have spoken about many times, the weekend got too far away from the Friday close and sure enough, without much hesitation at all, the Futures Market dumped on everyone and covered the Gap.

Unfortunately, now we wait until the morning in America to see if this is where they want to keep it or they were just filling the gap, as they do, and then continue what the weekend got started for them. 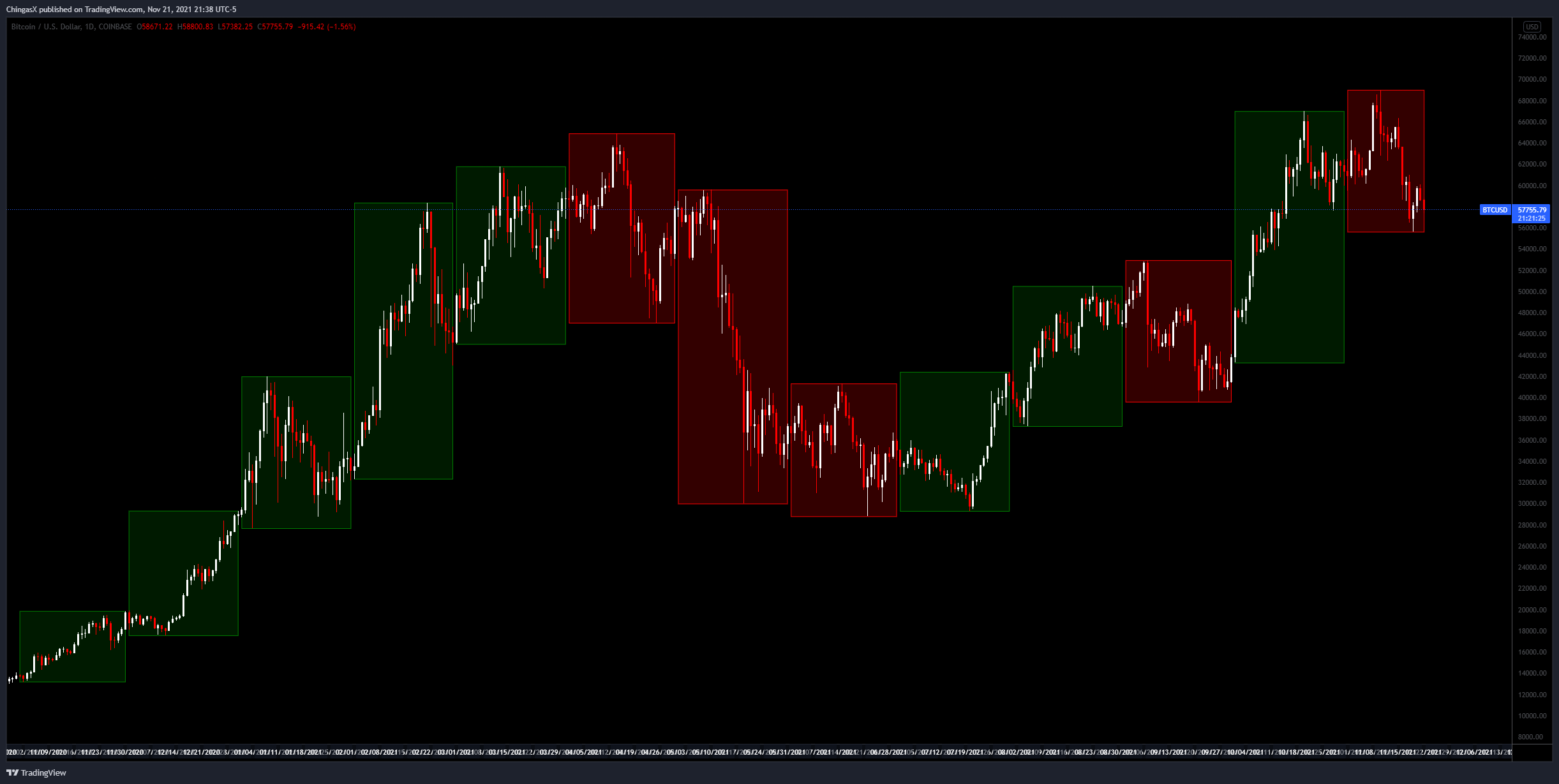 It was no easy task for Bitcoin to turn November Red – but here we are with a Red November at the moment.  Never doubt the big dog.  A 20% drop from the high was just what the doctor ordered.

The Month is creeping into the final third and there is a major American Holiday coming up in just a few days.  It remains to be seen how this m,month will end but history is on the side of the bulls.

Weekly S/R was tested and Weekly S/R was held for the most part.  The wick captured the angles while the body close remained within the Support Zone.  The new Weekly opened in the Zone and has been hovering just underneath it for a few hours now.

The shallow drop starts at 52K but it runs all the way down to 47K.  There is a lot of action in that zone but it’s also a very large zone.  Too much momentum going in there and it could be goodnight Bitcoin.  The Bulls would much prefer we don’t touch that area until we at least trade into the 70’s and 80’s.  They may have their work cut out for them. 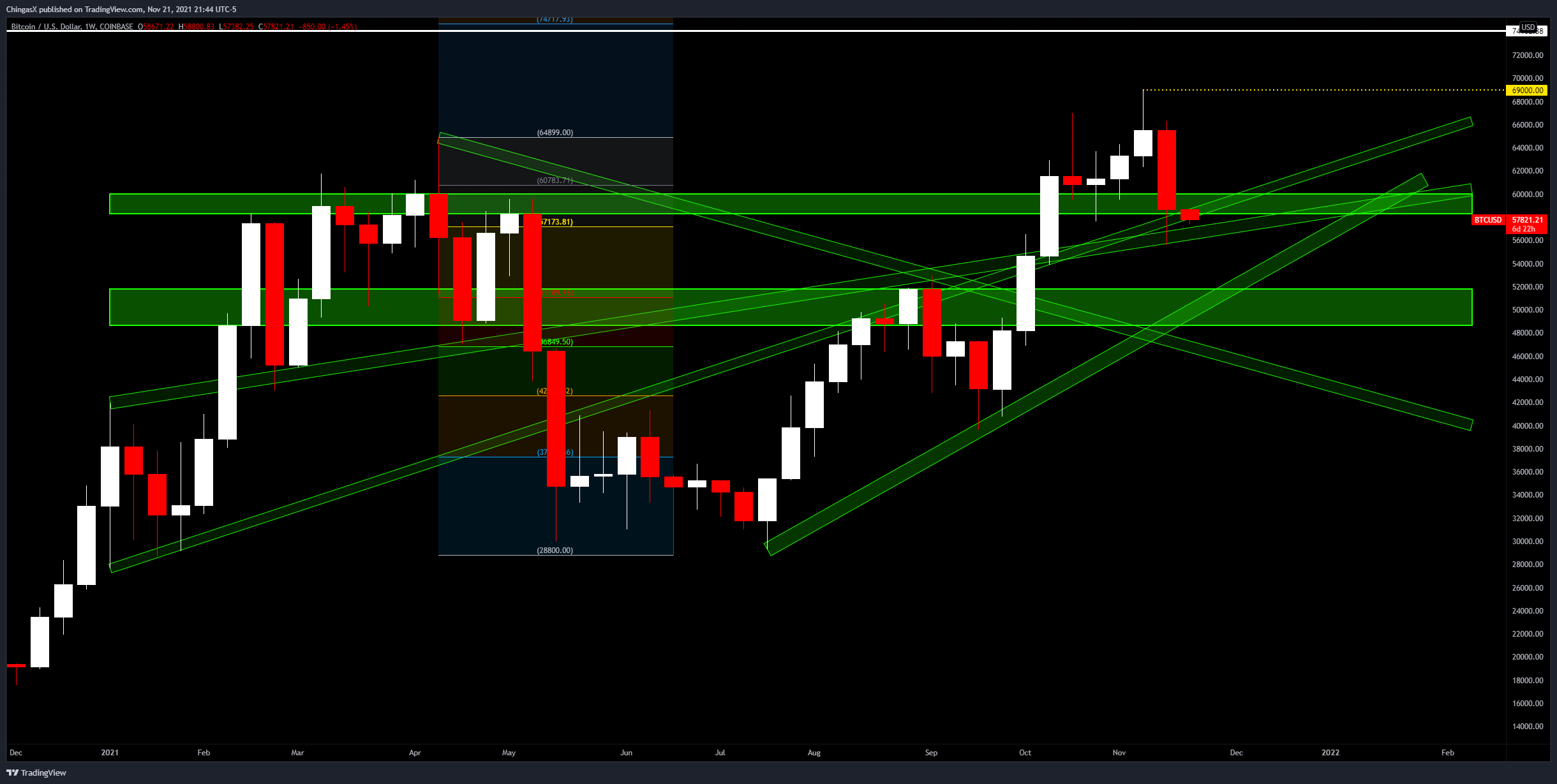 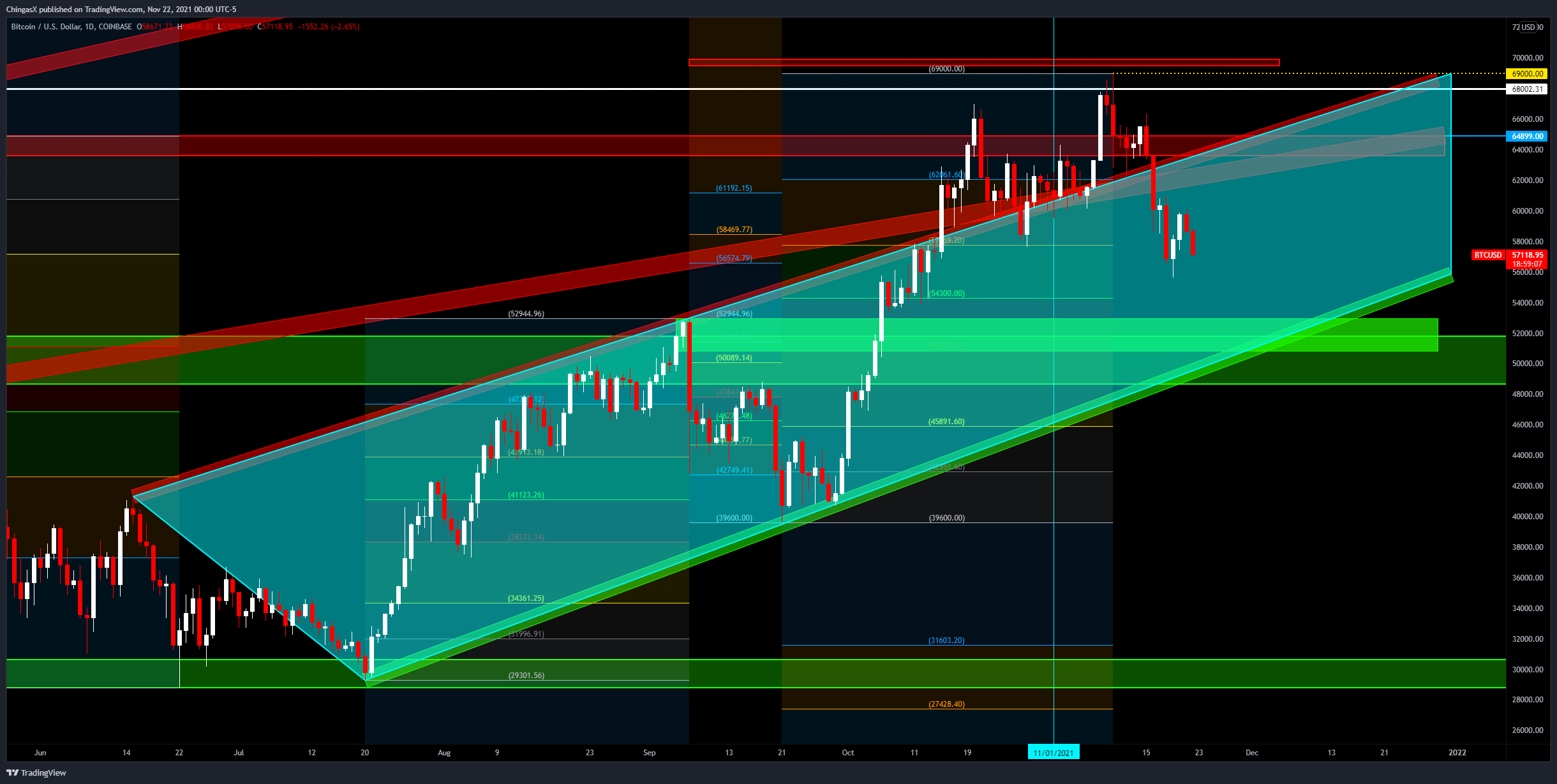 The $3500 drop on Tuesday set the entire week in motion.  Support was found but only temporarily.  The bounce was decent but it came too late in the week.  This allowed the Weekend Warriors to put into motion relief bounce.  However, the CME Futures market just wasn’t having any of that – not at all.

Now, we see that we have already traveled halfway down the channel – it only makes sense to finish the job.  The heavy Green horizontal Support area also has confluence with the local 618 as well as an upward sloping trendline that forms the bottom of the channel.

The 618 is $50,830 which means that it will cut into the previous high at $52,944 but only just slightly.  The Bulls do have a chance here tho, they would come in hot and heavy in about 10 hours and push this back over $62K – which will be the first local test of Resistance.  If the Bulls succeed then they have a long battle ahead of them back to $65.  If they lose then it’s a free pass to $50K.