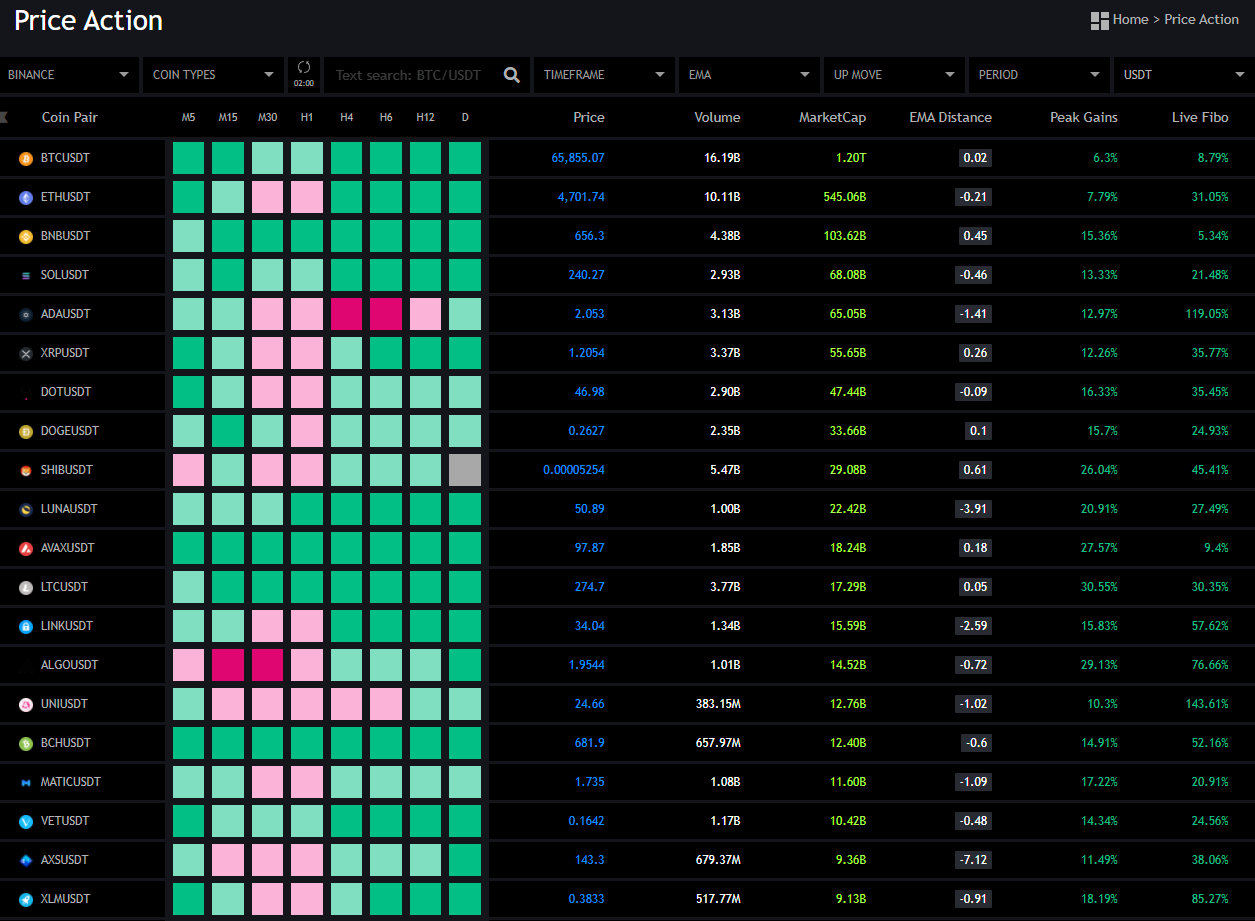 Well, here we are again with another week in the Bag!  All things considered, this week really had its ups and downs.  LTC put in about 32% since last week which is very impressive but not a whole lot to write home about in the T-25.

CITY, ENS, and KP3 are relatively new to the scene and they posted some big peak gains but IOTX and LTO were no slouchers.  They each posted 150+% gains for the 7-Day stretch.

As for the Downside – yup, CITY and ENS as expected.  You know, the faster they rise…………

BOND, LPT, and MOVR all had peak drops slightly above 40%.

ETH remains tightly correlated to Bitcoin by holding fairly steady at 0.85.  That being said, just about every other correlation is starting to come undone.  You would want to watch LTC after the week that it had but unfortunately – it appears decoupled from the rest of Crypto and it’s looking to clear its own path.  Watch Out!

GREED has once again tamed itself after cooling off for a few days.  When anything rises fast and then falls faster, people tend to get scared quickly.  Bitcoin did indeed create another New ATH but the pullback was enough to make it a short-lived celebration. 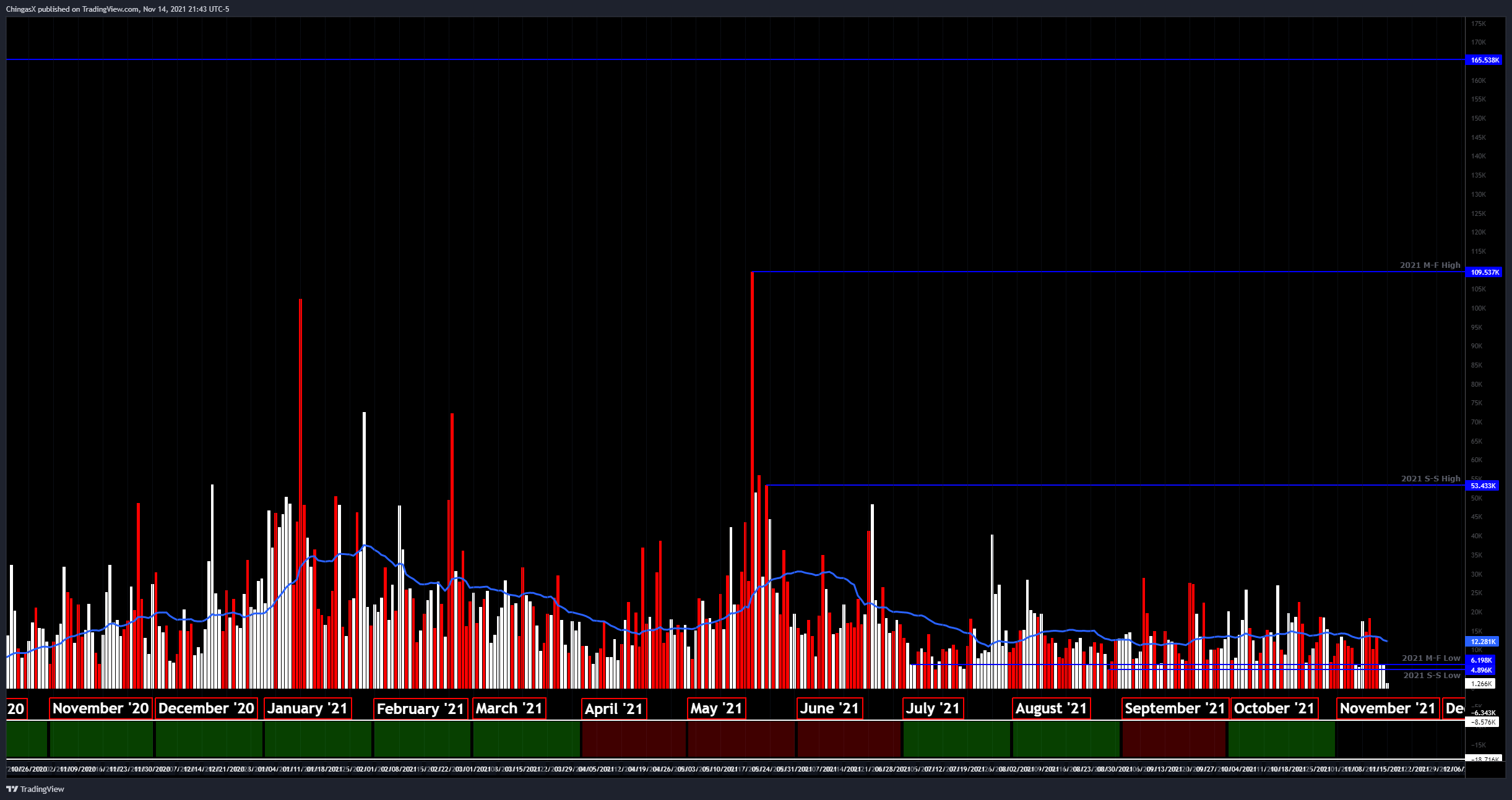 The disappointment in Volume continues.  The 30-day moving average is actually sloping downward now and that’s a bad sign globally.  If we do truly see an Alt Rally, then step one is the removal of Volume in Bitcoin – then pump the alts – and then remove all the volume from everything -= and then a crash ensues market-wide.  So, as much as people may want a big alt rally, they have to understand where that money is originating from in the first place. 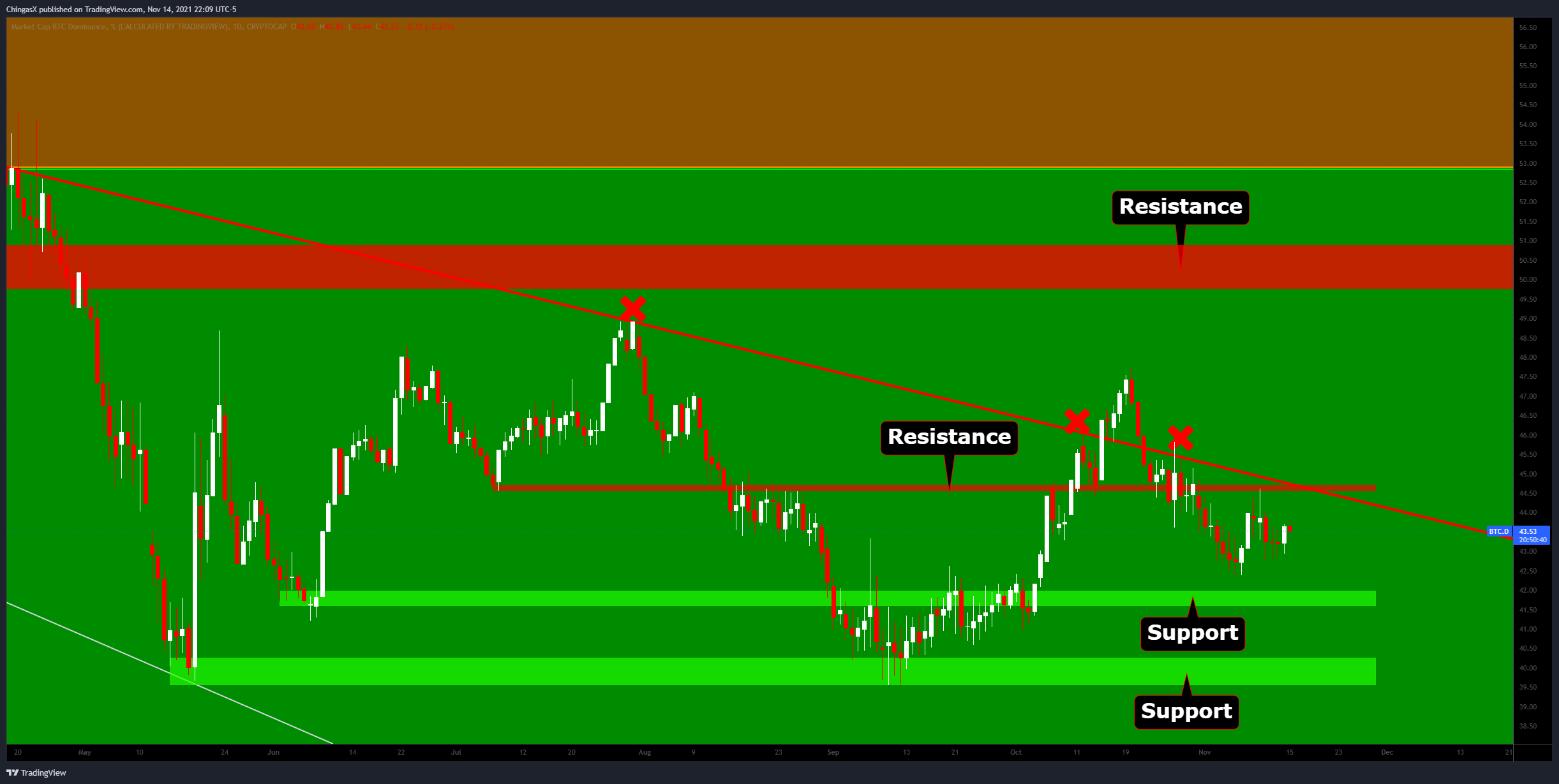 Dominance challenged local resistance this week and lost big time.  There was a very quick trip to 44.61 and then a quick drop back into the 42’s.  Bitcoin is struggling to maintain dominance in the mid-’40s and even with Dominance in the low 40’s – that is really nothing special for the big guy.  This does mean that money is moving into alts and alts are making huge moves – compounding high MCAP on top of high MCAP while Bitcoin-only makes very few moves and then goes sideways for a bit.

This is not as big of an issue as Volume but it is absolutely something to be aware of.  We do show support from 42 to 41.50 and there is looking to be a good chance we see that before we test the downward sloping trend again. 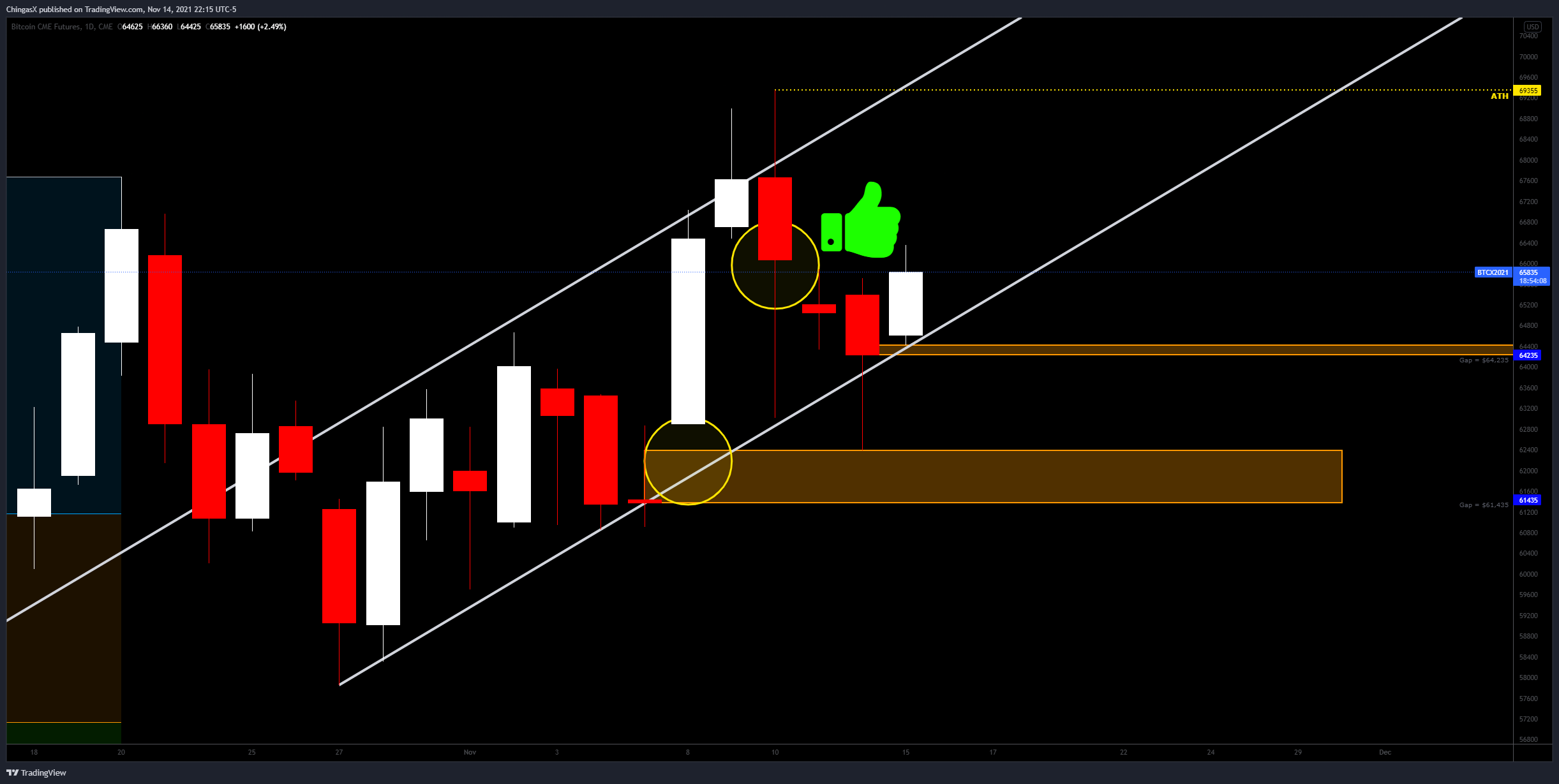 So we had a few Gaps get taken care of this week and a few new ones have taken their places.  The Real big Gap sits at $61,435 and although Friday did chip away into the gap a little bit, it was not enough to fill it.

There was a gap in the $65,800 zone but that was filled on today’s candle.  That being said, today’s candle did create another Gap to the downside at that now sits at $64,235. 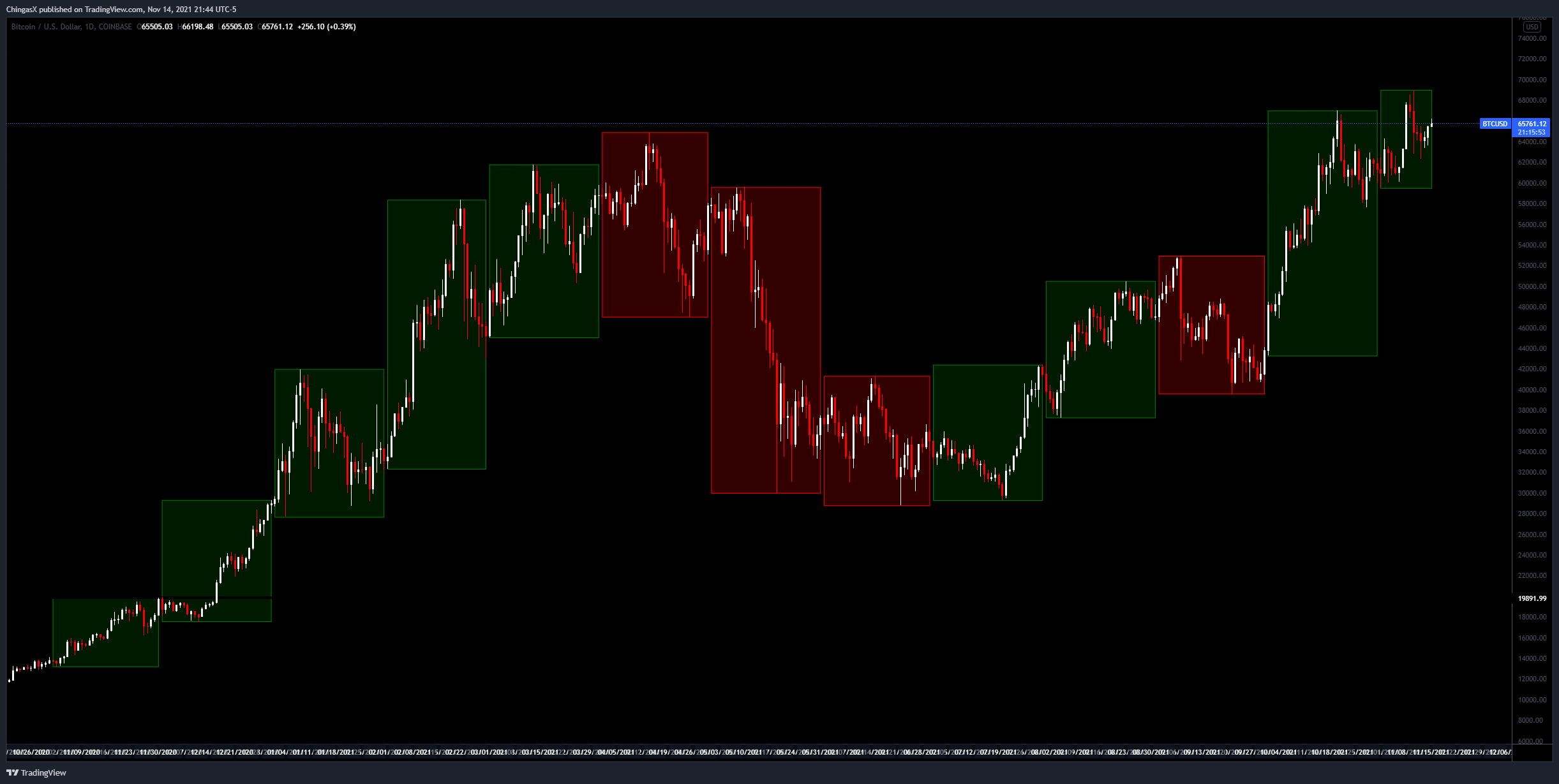 November continues to be Green but it has seen a few setbacks.  Novembers in the midst of rallies – cue in 2017 – have performed extremely well and I do believe that there is a lot of traders foaming at the mouth for this November and December – especially after seeing the kinds of moves we have seen all year.

That is correct – $69,000 – and not a penny more, is the new ATH for Bitcoin.  That breaks the $66,999 posted 4 weeks ago.  There is no clear reason why Bitcoin would be looking to retest support because it already did but it is certainly not out of the question.  Support remains unchanged in the 58-60K Zone.

There are a few very interesting support trends that could play a factor if we see a few really nasty moves. 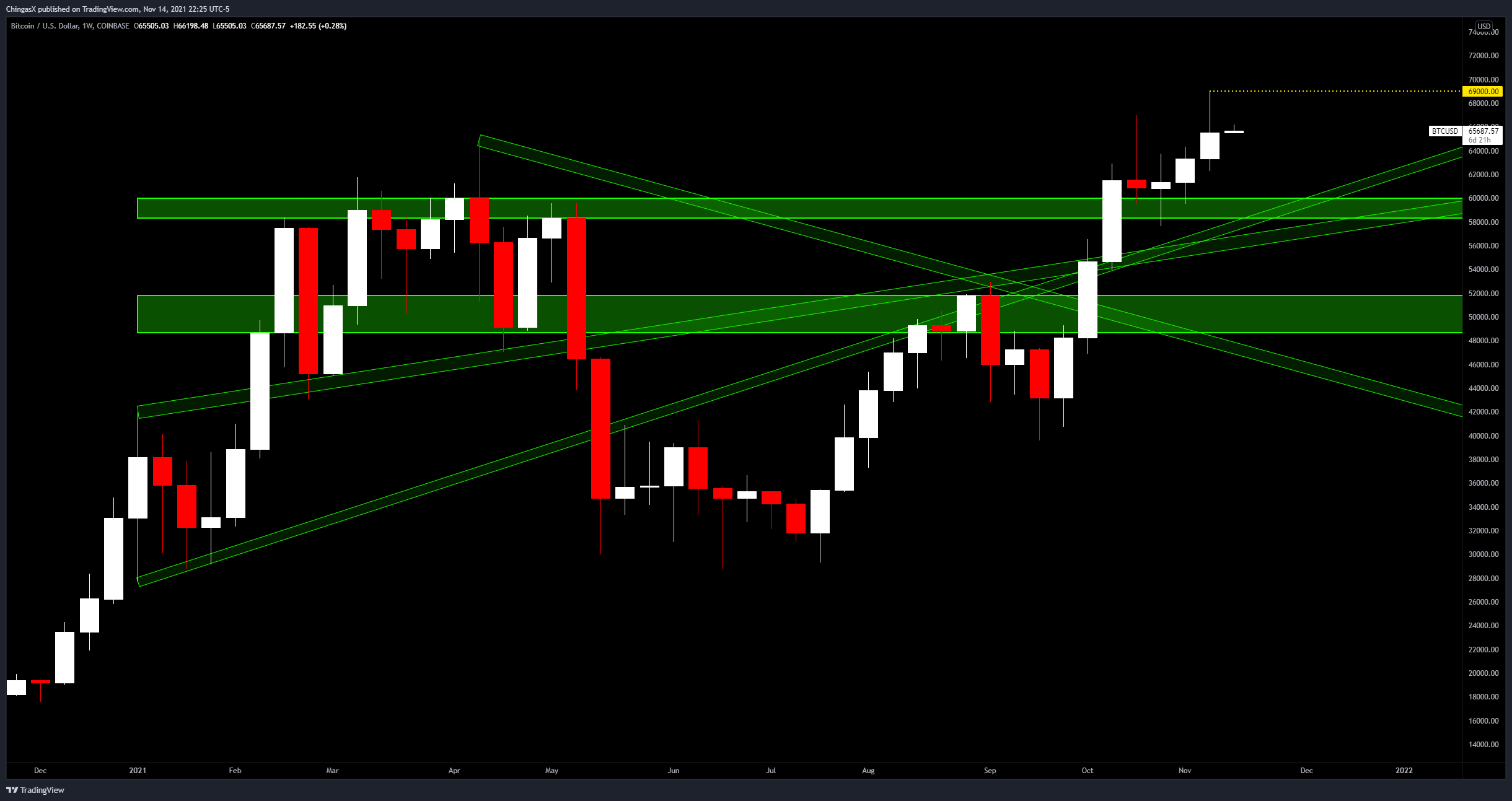 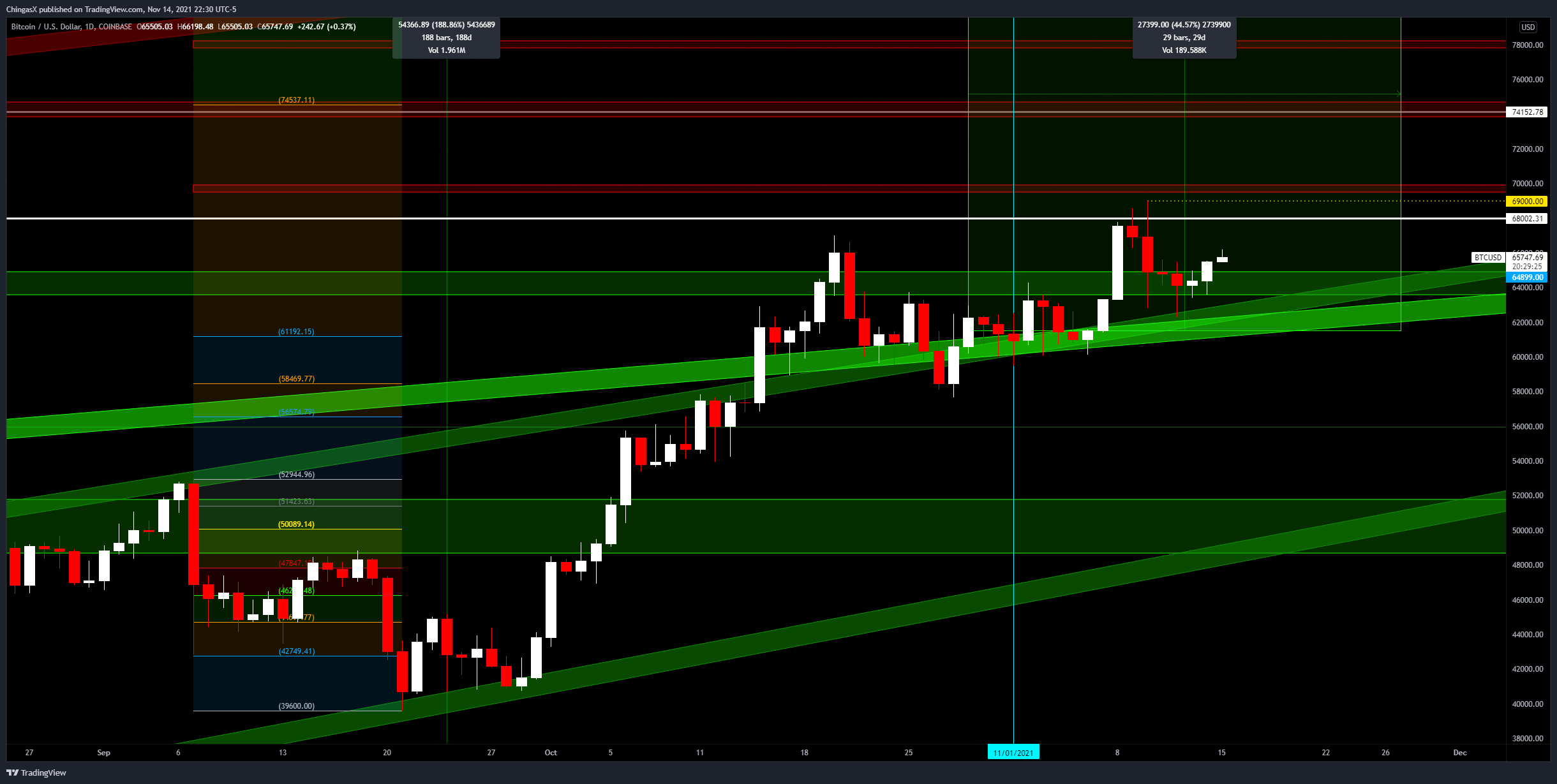 The biggest takeaway for the week is the relative disappointment moves Bitcoin made AFTER creating the new ATH.  If we just look at the price action we can clearly see that from ATH to ATH – there really isn’t a very impressive move.  To add insult to injury, the ATH was created on a down day.

Price Discovery for Bitcoin is such a wild game because traders are literally sitting on the edge of their seats with a finger hovering over the sell button – FOR DAYS.  Everyone is trying to time the top – especially those 2017 traders who waited four years to break even after buying the top at the end of 2017.

The next major level that looks good for a few different reasons is $74,000.  Now this is far below the $88,888 that we absolutely have a shot to see before the end of the year but I believe $74,000 will tell us something – either we have people that are purposely shaking guys lose and 88 is a go or there really are enough traders dying to try to sell the top that they actually create a crash all by themselves.

Neither situation is ideal but we will analyze whatever we get.