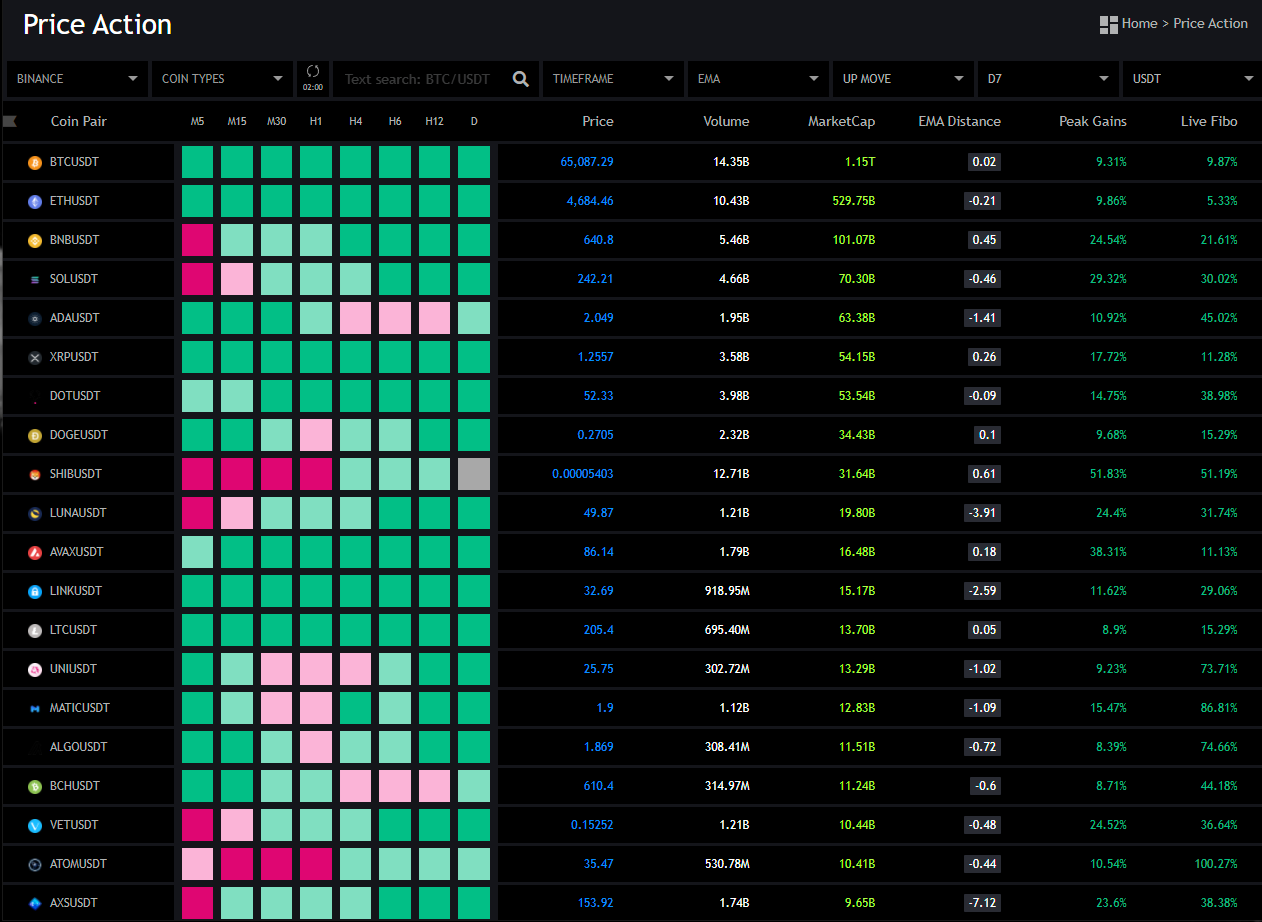 Another crazy week in Crypto – that is for sure!  This week we saw a lot of big names make some New ATHs including SOL, AVAX, AXS and so many more.

The Big Boy himself has been relatively inactive – that is, until earlier today.  As of this writing, Bitcoin has already come within 2% of its ATH set on October 20th at $66,999.  Will today be the day we traverse the ATH threshold once again?  Do we have what it takes to reach $88,888?  Let’s round up some Weekly numbers and see what we have going on.

As far as PEAK GAINS are concerned – we see multiple triple-digit entries on the list.  IOTX, BADGE, and HNT posting gains over 100%!

Unfortunately, IOTX and BADGER also made the PEAK DROP list as these coins tend to put in massive moves and then tank 50%.

Nothing unusual for Crypto.

META has cooled off a bit and some L1s are looking hot again.  SOL and AVAX as well as FTM are all looking very good for continuation – barring any sort of Bitcoin Death Spiral.

ETH and BTC still top the list at 0.85 correlation.  Not a bad deal when one of them is making a new ATH.

Another entry worth noting is XRP and XLM – sitting at 0.79.  So if you absolutely can’t bear the thought of buying XRP – you can likely take a position in Stellar instead!

Break out the battleaxes because we have hit Greed now in all four markers… Now, Yesterday, Last Week, and Last Month.  When the pin slides to Very Greedy – it’s time to be a bit cautious. 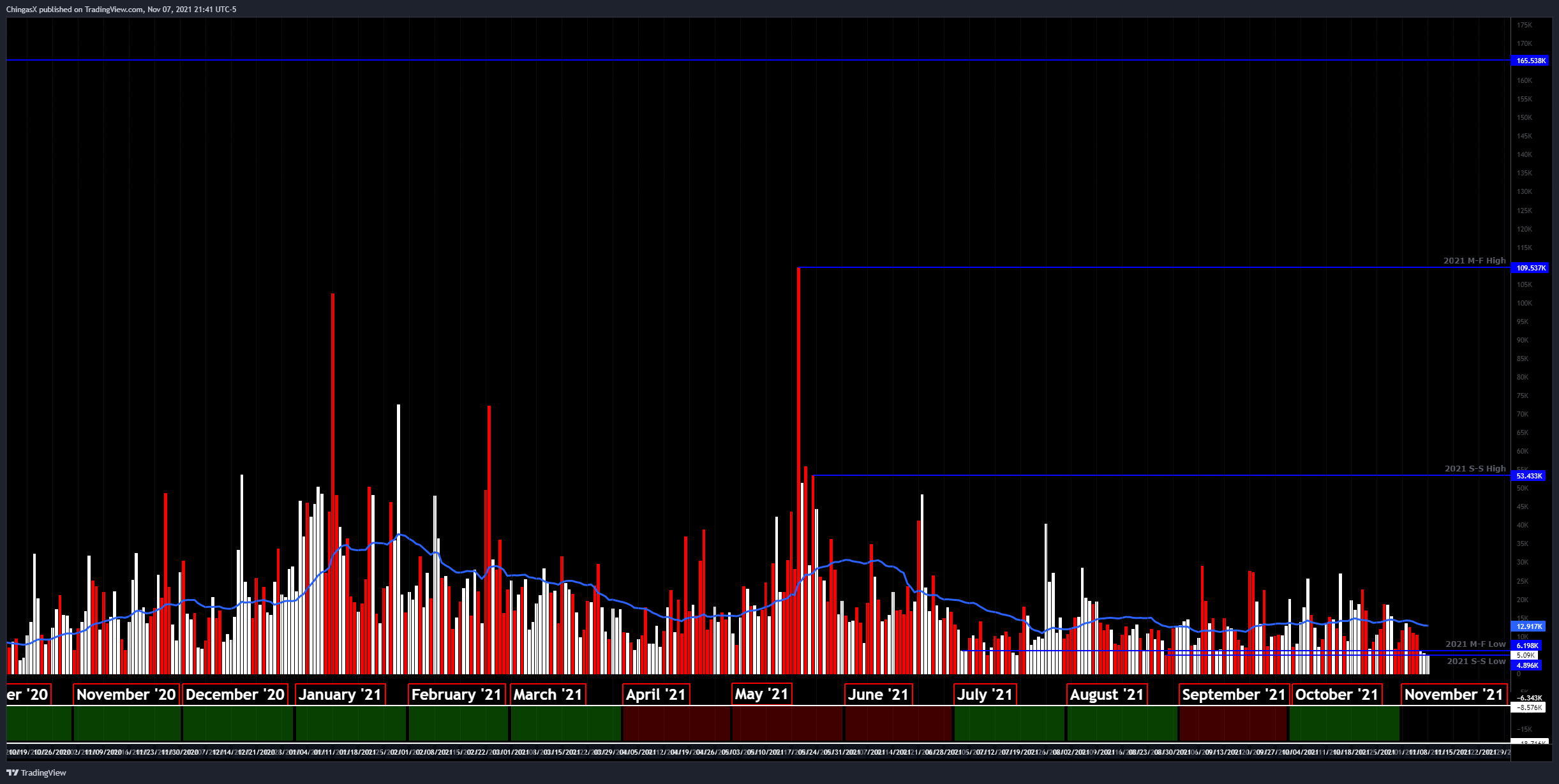 Unfortunately, nothing really cooking in the Volume department.  This is sad and lends a red flag to any major upward or downward moves.  If Bitcoin is moving without a lot of Volume then you want to be on the lookout for a fakeout.  Volume has been sideways since the end of July.  The good news is the Crypto Global MCAP is over $3T! 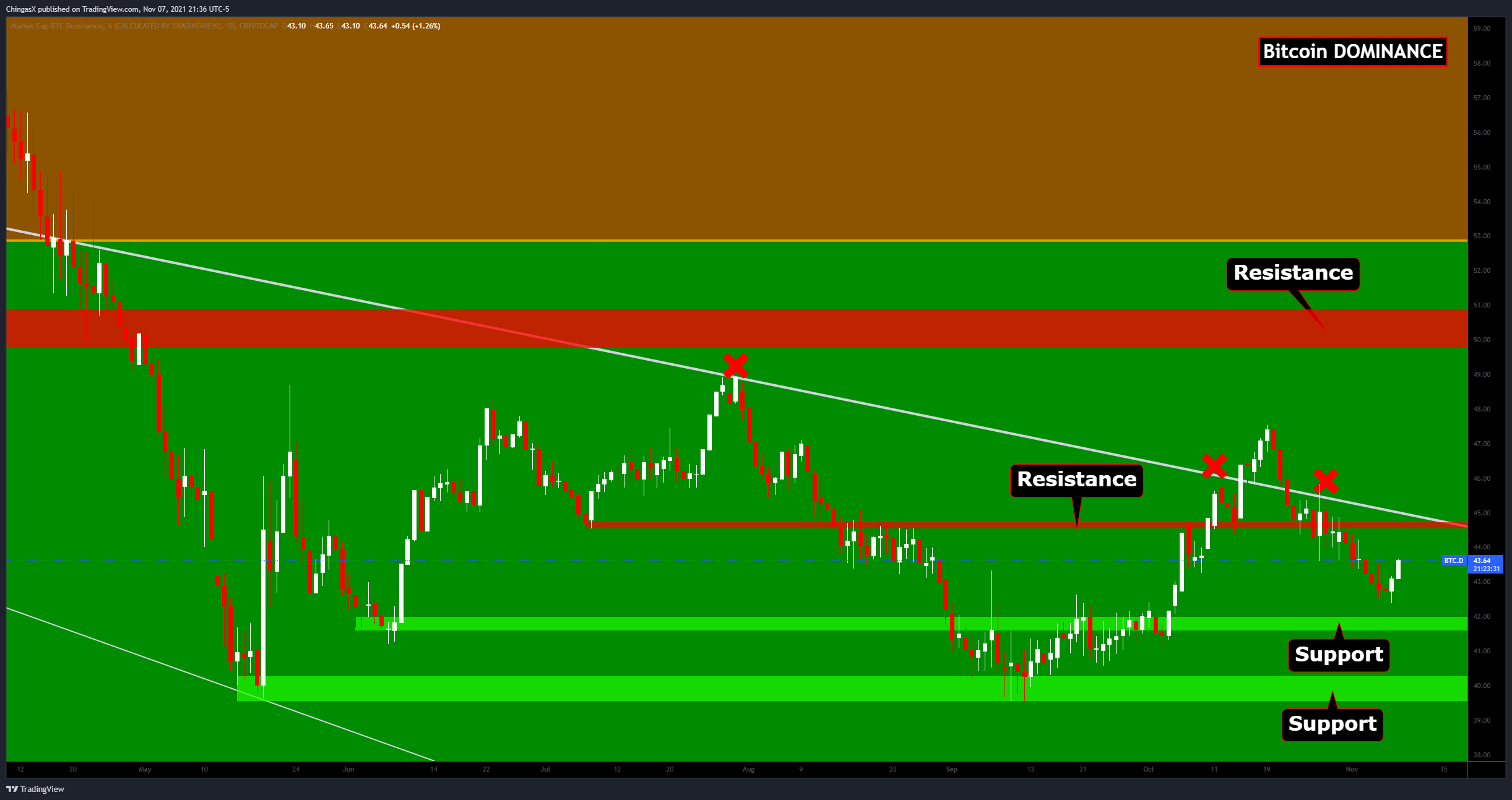 We asked for a lifeline last week and we got one.  The reversal came really late yesterday and so far is continuing today.  This is after a week-long spell of Lower Lows headed into Support.

Dominance is not really something that gets front-run – more of a metric for the overall interest in BTC Pairs and Bitcoin as a whole. 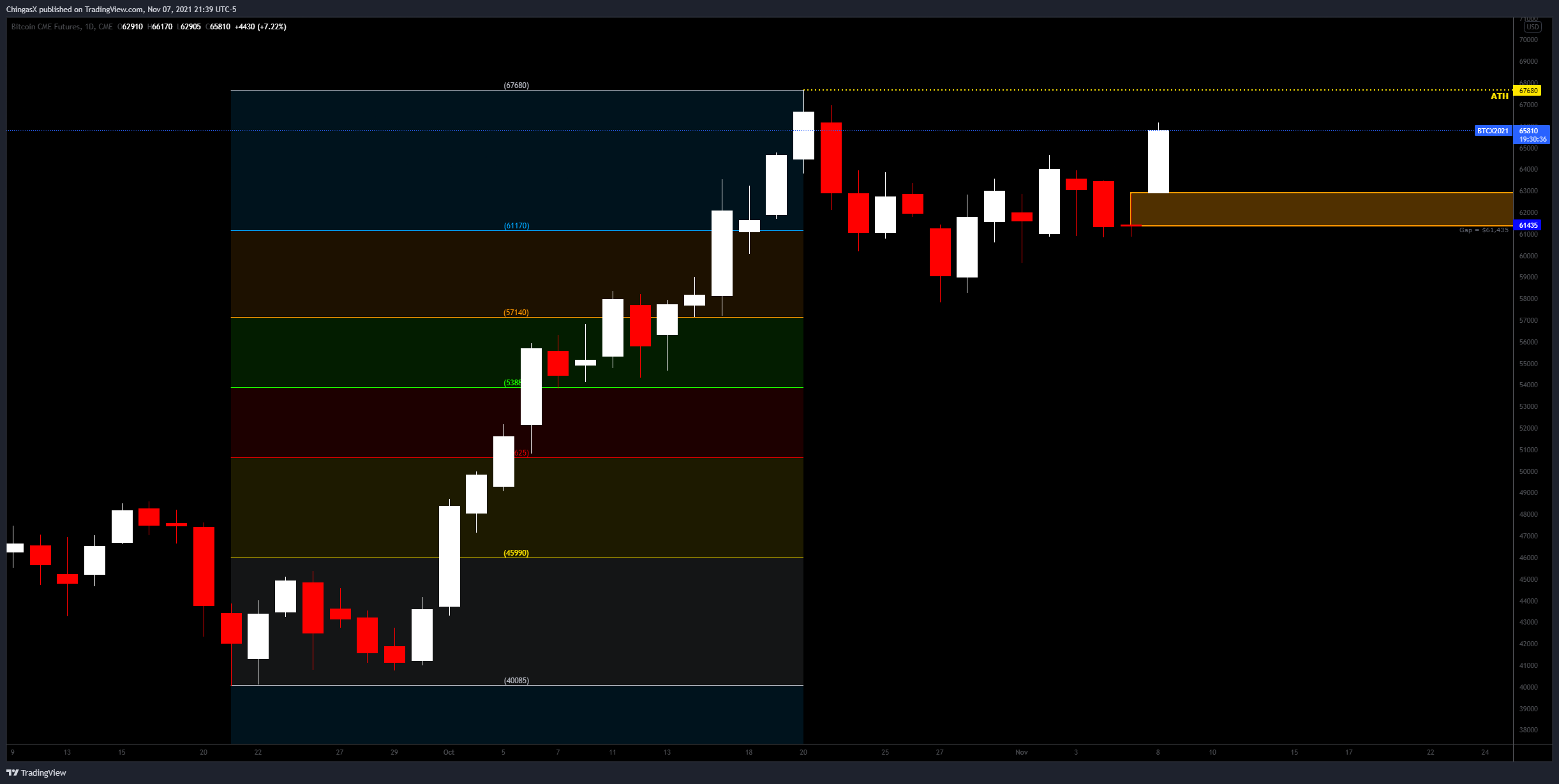 CME Futures had a lot of little daily gaps that have since all been filled.  The Newest Gap was created today when Futures opened up and Bitcoin was already trading $1500 higher than its Sunday close.

There would be no surprise at all if this gets filled in the next 24 hours. 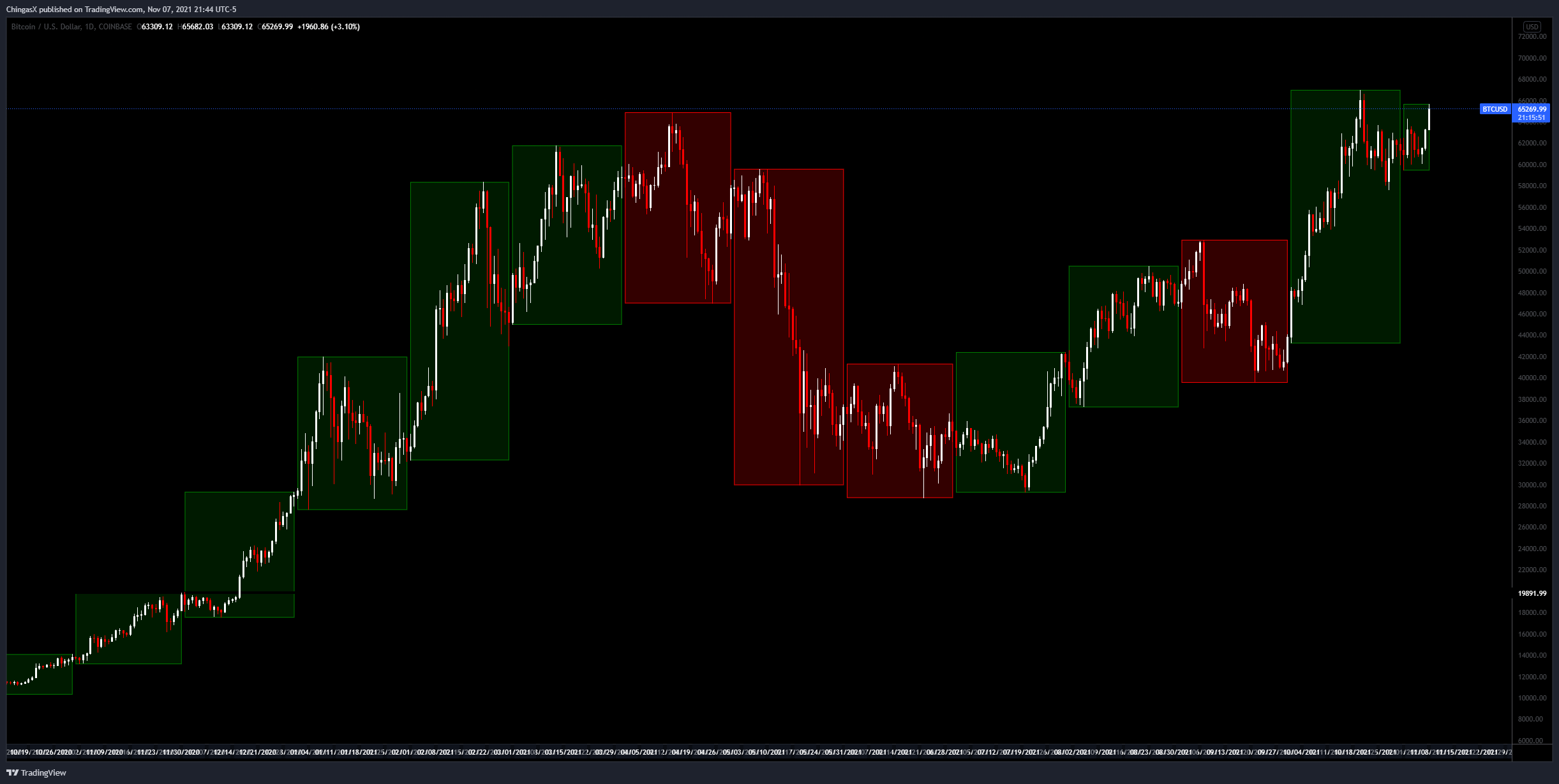 October was very Green and so far November is too.  Now a November/December rally is certainly not out of the question.  One must be ready to see what fireworks can be brought to the field if we are to rally hard like 2017.

Weekly S/R remains relatively unchanged.  Some trendlines were added in case of large sell-off wicks or liquidity grabs before a major run.  Those are never out of the question, especially if they really do plan on pushing this thing up 20K.  A massive Spike down to $53K would almost certainly be a liquidity grab for the ultra-rich and greedy. 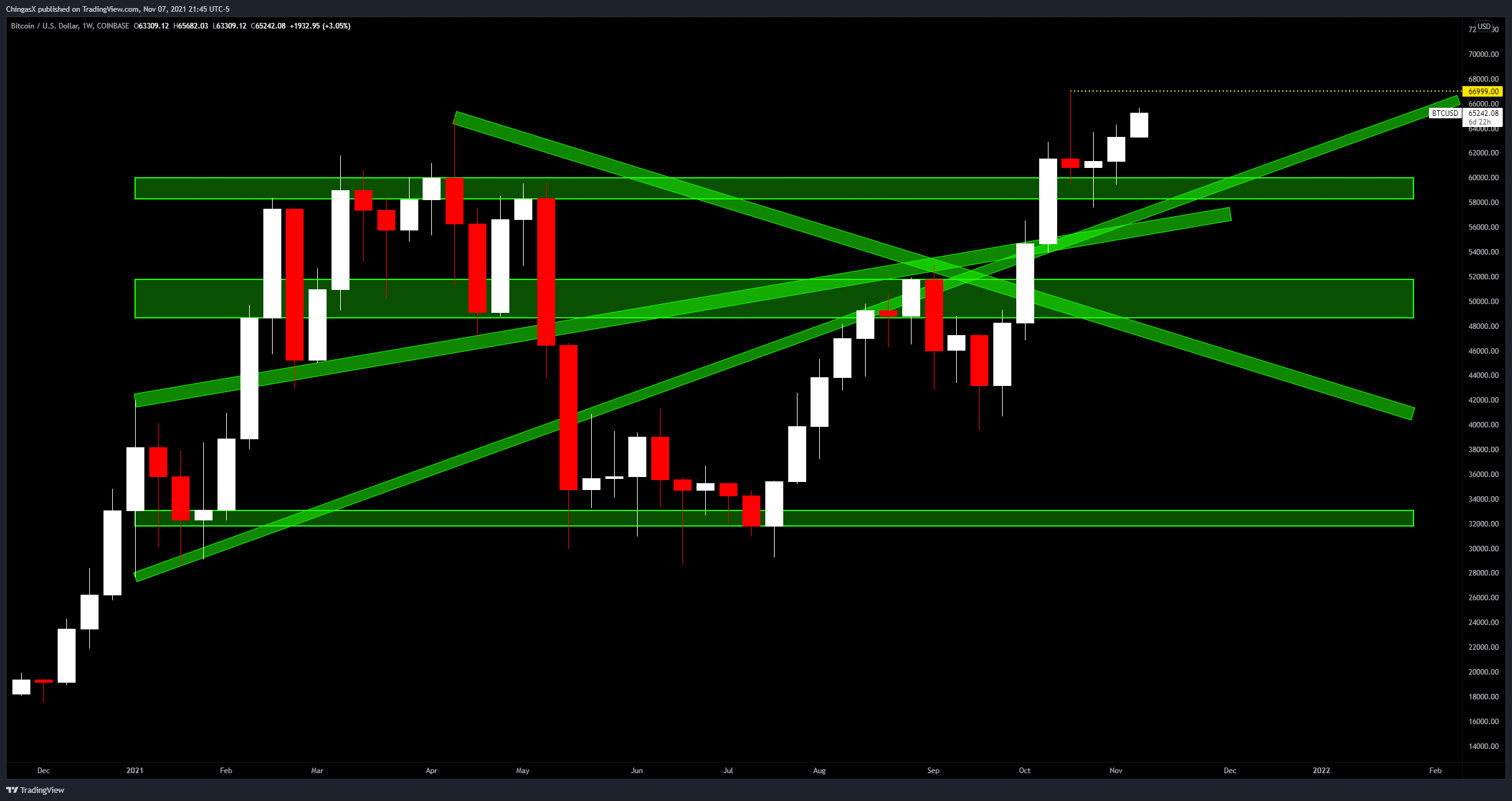 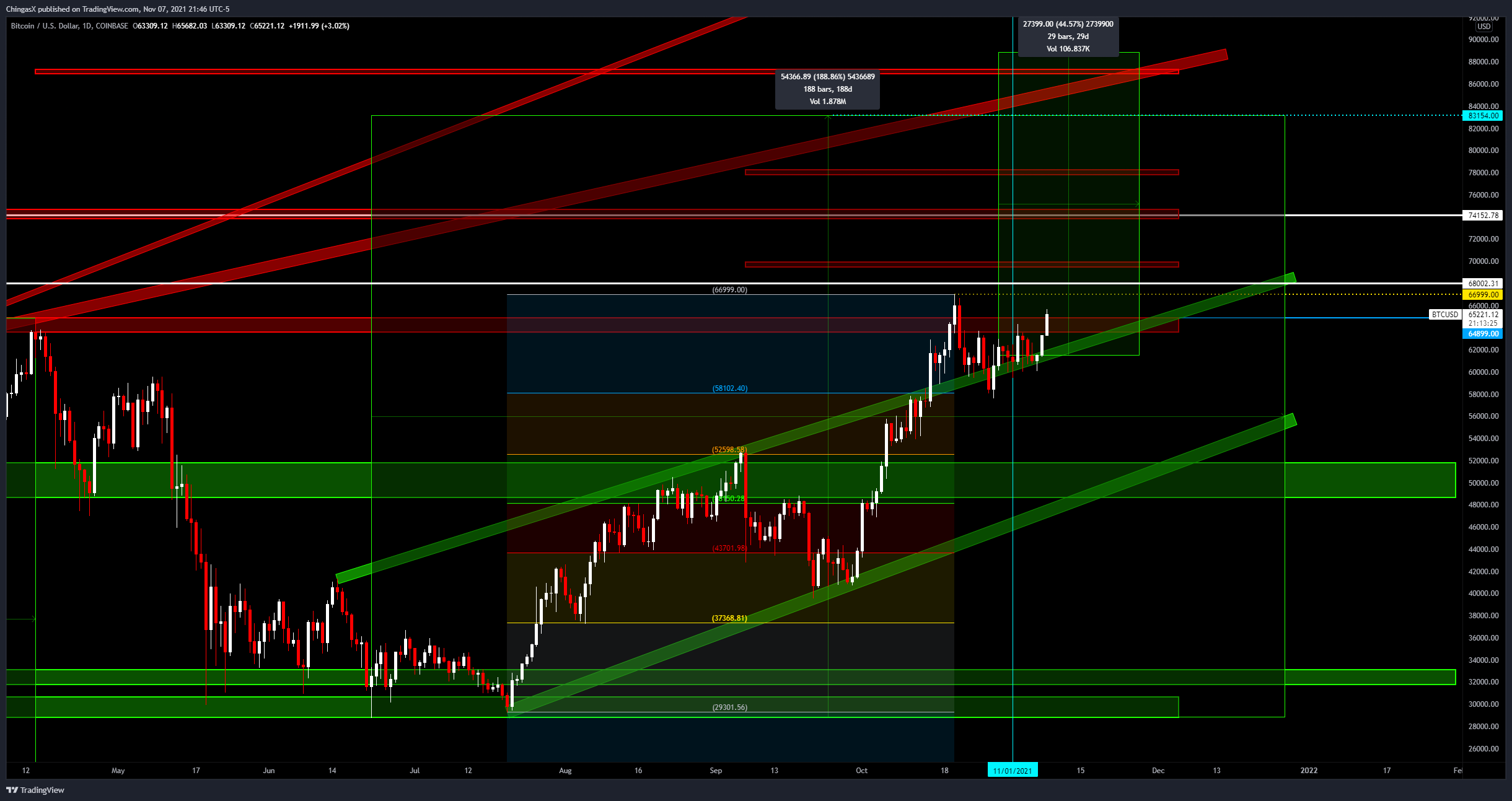 There is a lot to look at here but we are mostly focused on the Price Discovery levels provided by Fib Extensions and the confluence of seeing a Bull Flag start to play out.

On the more local side, we have an Ascending Triangle from which we talked about this morning.  All things considered, Bitcoin really has a chance here to put in a few really solid candles – that being said, some Alts will likely cool off in that process.  Unfortunately, we can’t always have our cake and eat it too!