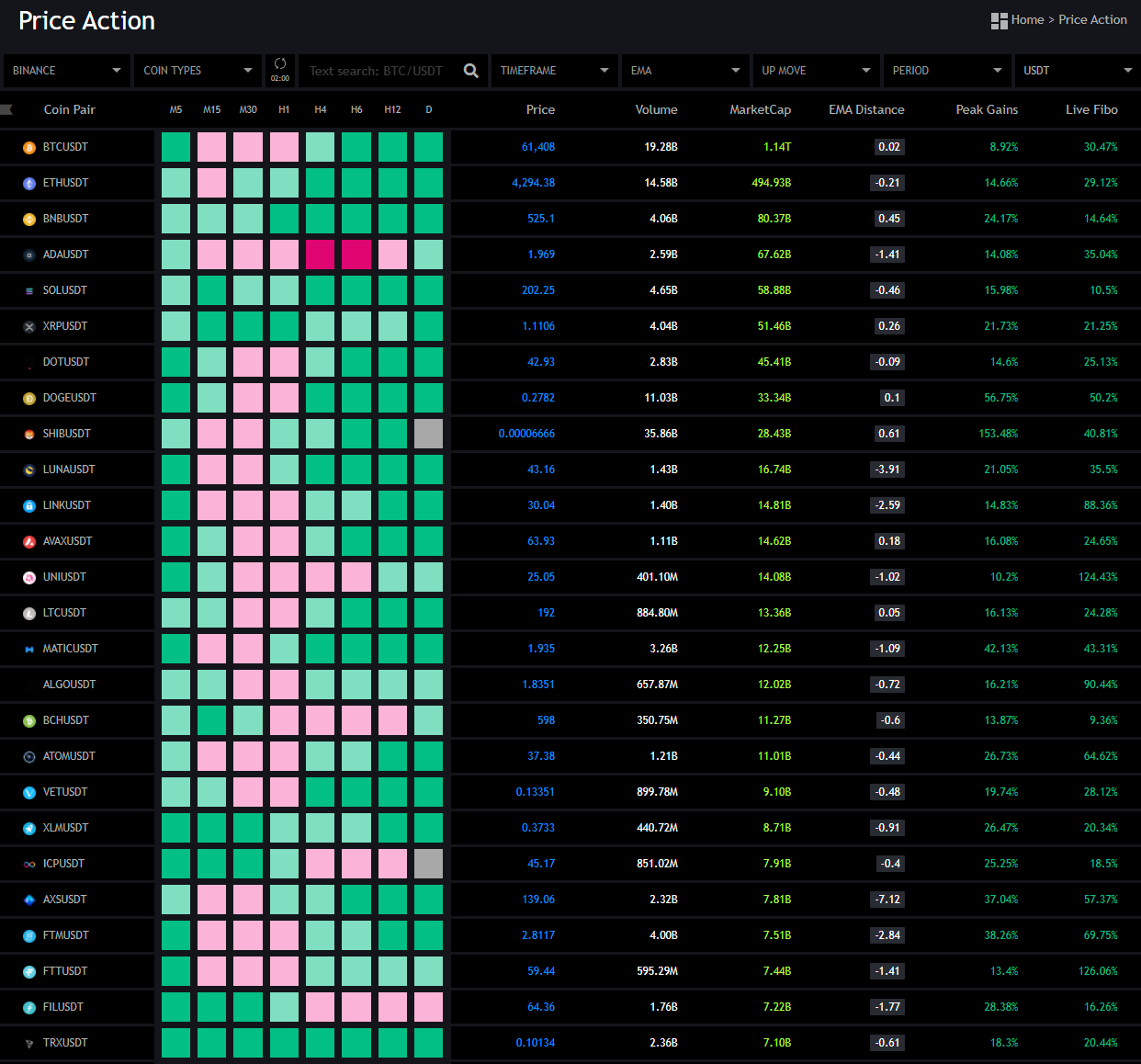 Call it the Week of METAverse!  MANA had a peak gain this week of 596% with SAND putting up a peak gain of 243%.  What a time to be alive.  There were a lot of scalping and short-term trade opportunities for Traders this week.  We also saw a lot of SHITcoins trying to show their first signs of life.  These are the ones to accumulate for a larger swing.

Let us not forget Facebook announcing the name change to META likely had something to do with the Metaverse tokens getting a huge push and also this week, Ethereum traded above $4400 for the first time in History!

ETH is tightening up its correlation with BTC at the moment.  Last week we saw a high reading of 0.78 and this week we are sitting comfortably at 0.85.  Also this week, ETH made a brand new ATH, and Gas prices remain through the roof.  Awesome!

GREED is still on the menu boys and girls.  Two weeks ago we were sitting at Extreme Greed but last week we slowed down a bit and just Greed took over.  We are currently looking at another Greed situation but we are very close to the Extreme Greed threshold.  This metric is always good to look at just for the overall Crypto sentiment. 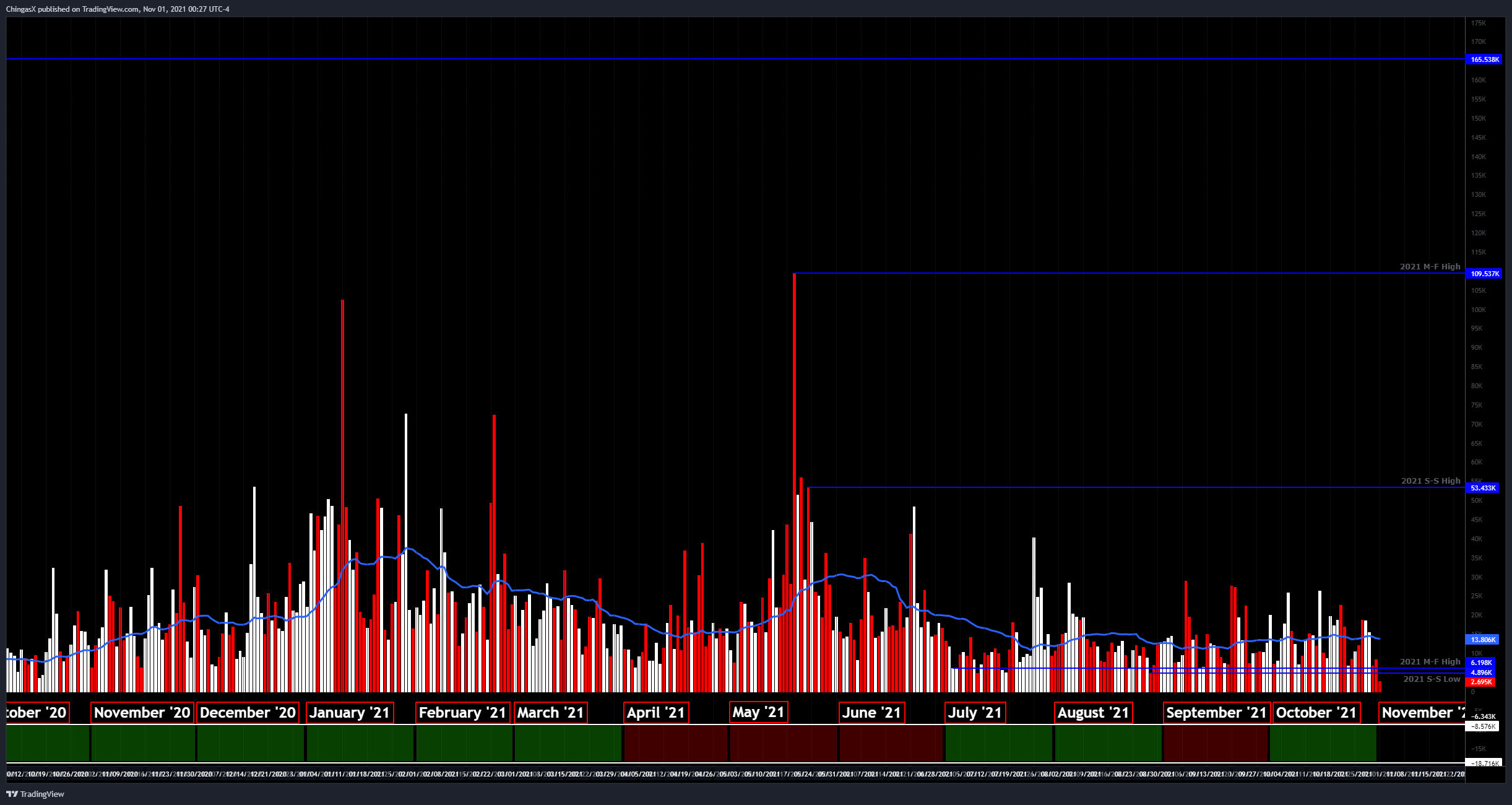 Once again we had a relatively boring week as far as the Volume is concerned.  This could turn out to be a blessing in disguise if the Alts are able to take over for a little bit.  When the Altcoin Market gets moving, we see less and less BTC trading because Traders feel better about selling some Bitcoin for Altcoins when Bitcoin is not pumping. 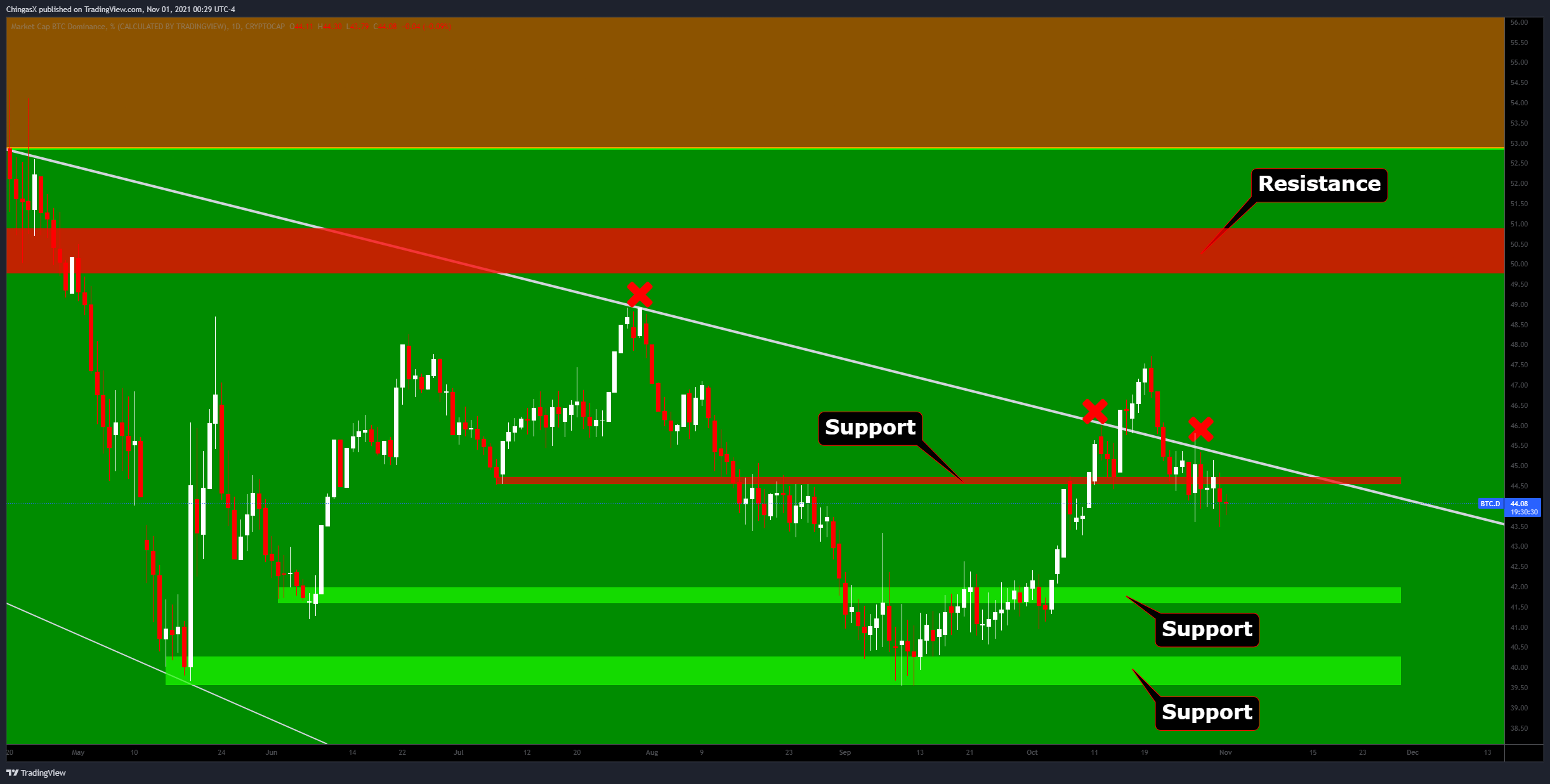 Somebody throw this guy a lifeline…  Dominance had every chance in the world to stage a rally up to 50% and just completely failed.  Trend support did not hold and was retested as Resistance again – that held.  The horizontal Support has now been flipped to Resistance and we don’t have a whole lot in-between where we are and 42%.

Again, With Bitcoin price falling and Volume dropping off, it is not surprising to see Dominance drop off as well.  It really comes down to how much can it drop and will it drop below our lowest local support? 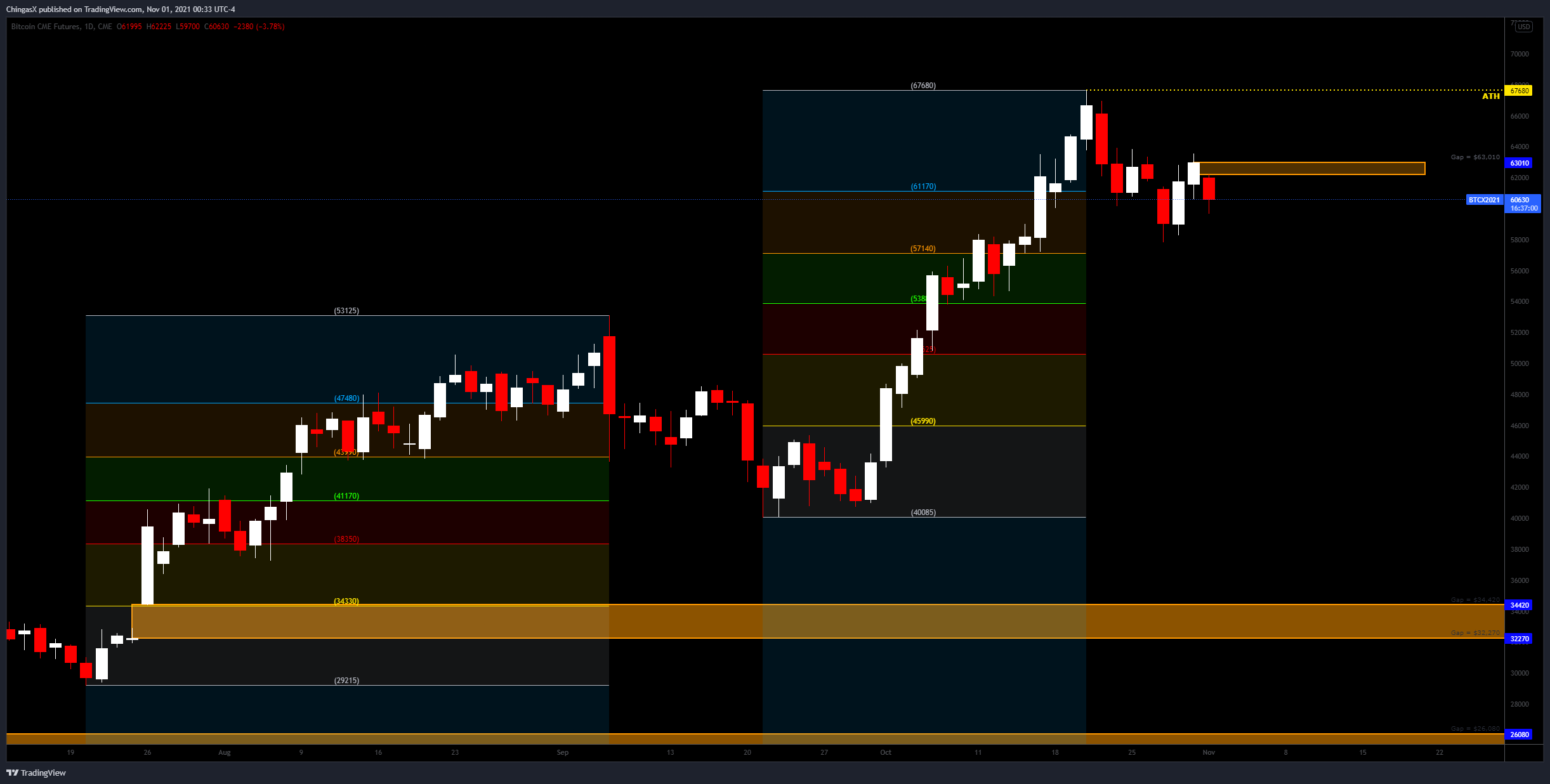 CME Futures did show a few Daily Gaps here and there but they have all since been failed.  We explained during the week how gaps tend to get filled rather quickly.  This was an opportunity to see that happen when the Gap on the 27th was filled on the 28th.  You have to love when a plan comes together. 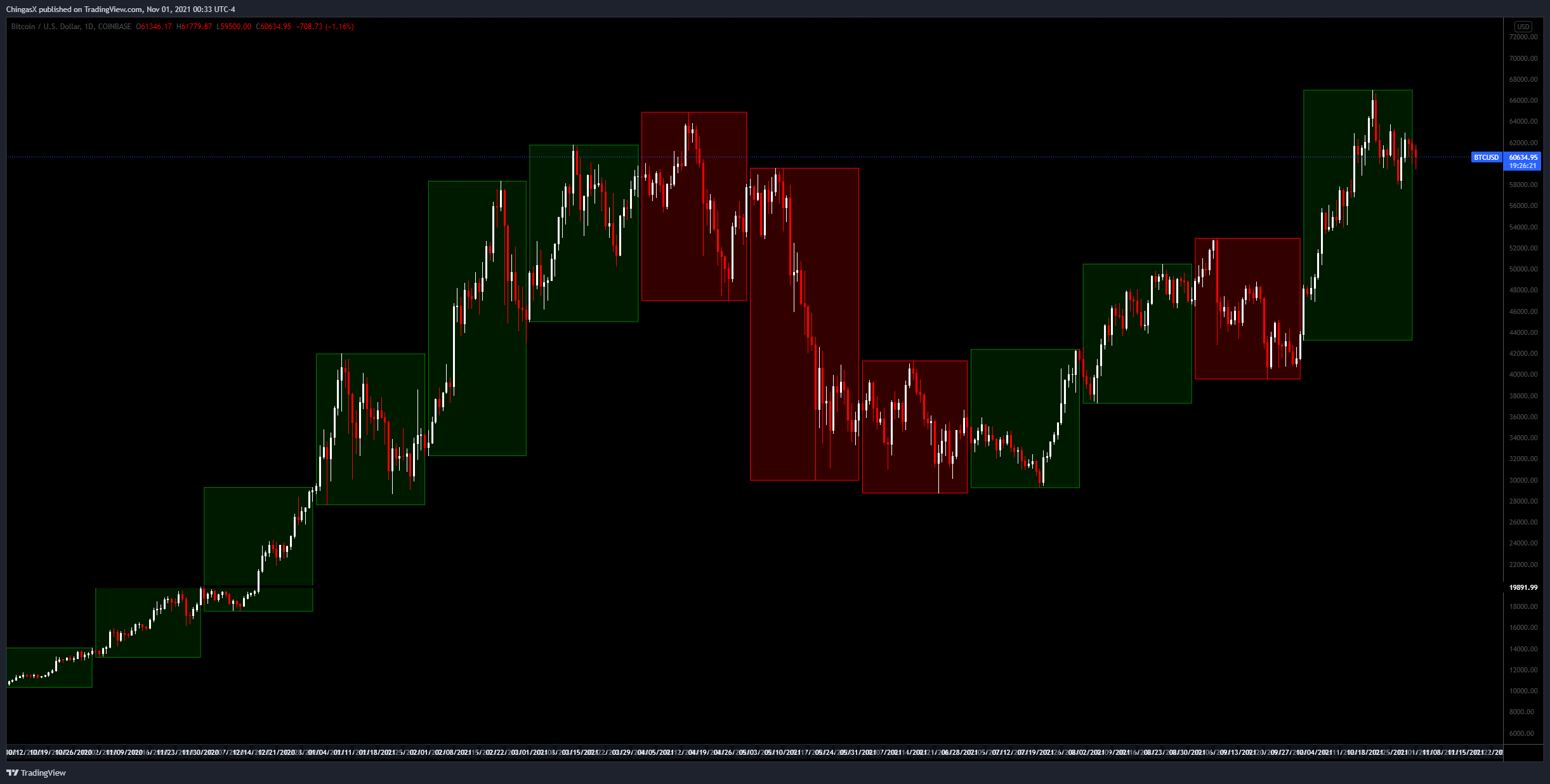 October is in the Bag and it finished solid, clocking in a brand new ATH and about a 40% move up from the beginning of the Month.   The Trend is most certainly up from the looks of it but don’t let your eyes deceive you.  We can still take a very significant drop and still remain in trend.

Weekly S/R is relatively unchanged.  $58 – 60K continues to get tested and it continues to hold.  ATH has not been tested and price action hasn’t really even come close.  The Support Zone has already been tested this week and the weekly candle is only 5 hours old as of this writing.  With the Volume, Dominance and overall Price Action down for Bitcoin, there is a chance we go sideways for a little while.  If we see Volume pickup and the sellers keep testing support, then we will likely break support.  However, if Volume is to pickup and the local trend starts rising, then we look for a local breakout to go back and retest the ATH at $66,999. 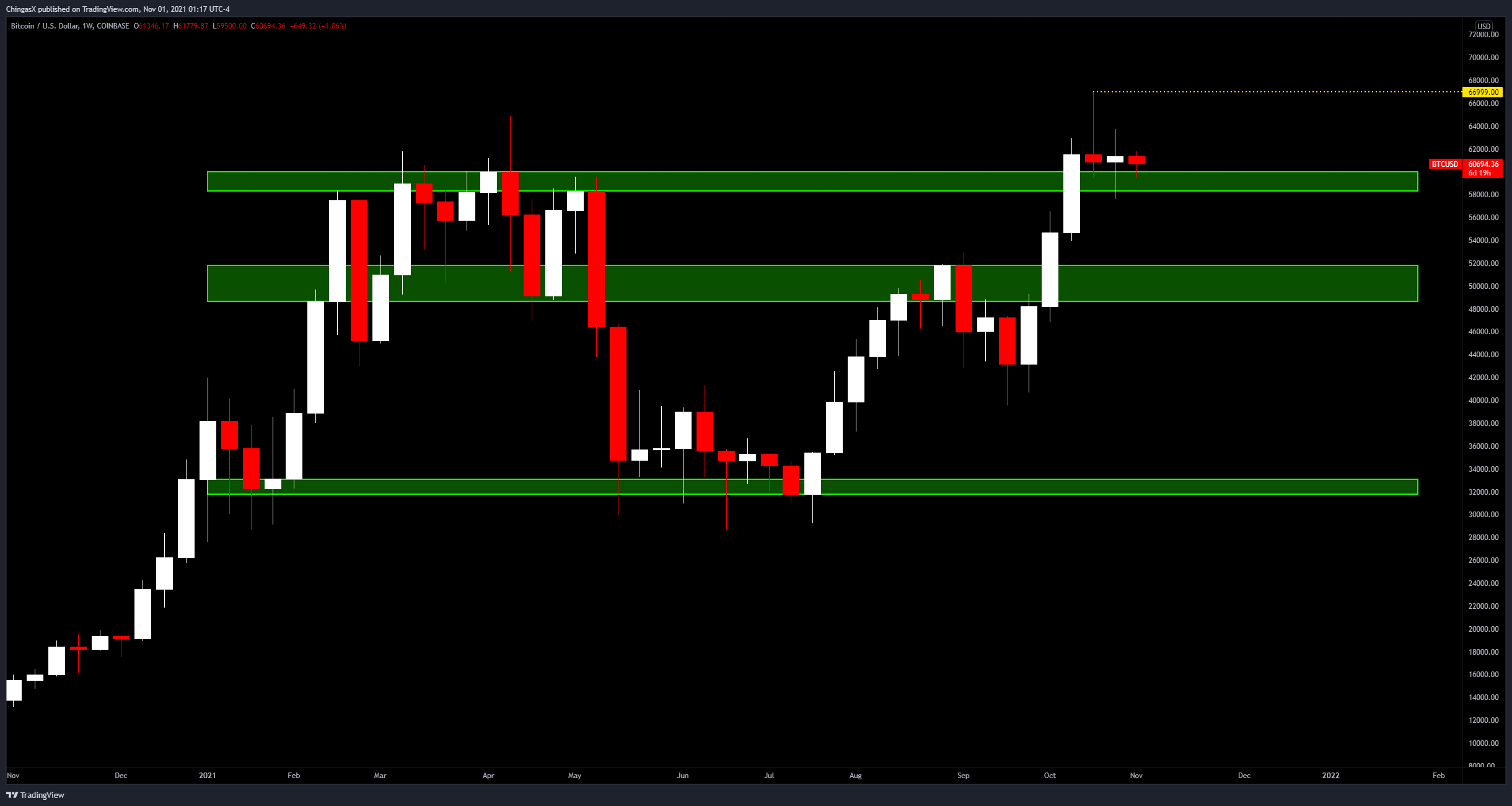 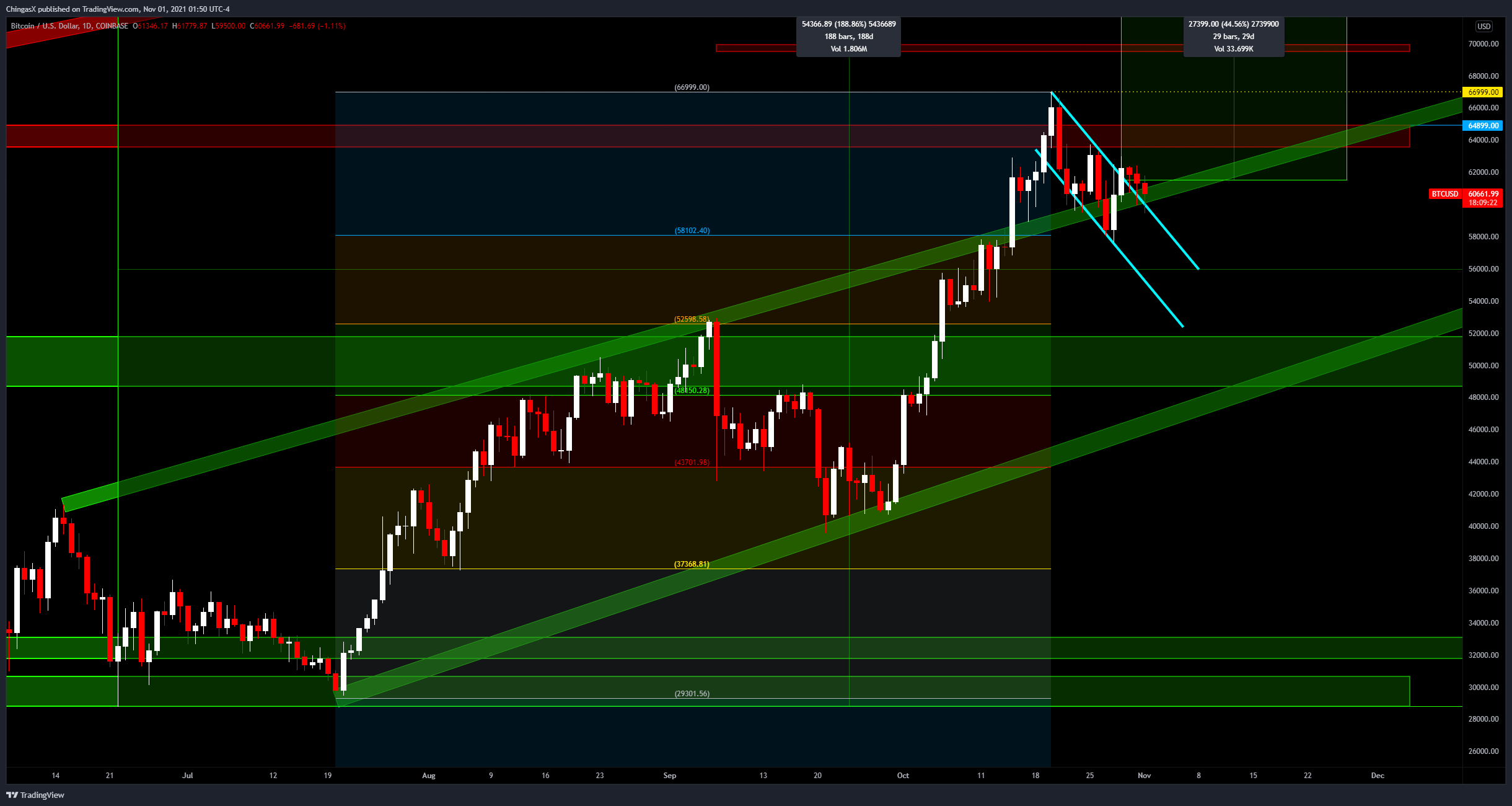 After a 14% move to the downside, Bitcoin was able to rally back and just barely break through local resistance.  The following day we saw a successful retest – flipping that resistance to support and closing above support.  The last two days, including today, we have tested that same trendline and we have found support both times.  The problem is that the trendline is dramatically sloped downward so we can technically keep using it as support and continue to lose value in Bitcoin.

Players like SHIB, ETH, MANA, and SAND stole the show away from Bitcoin last week but a lot of that came towards the end of the week and the weekend.  It remains to be seen whether Monday Price Action will be more of the same or if we see a bit of a spark now that November is finally here.

With that local breakout the other day, we do have the ingredients for a Bull Flag and the setup is actually very good.  You know what they say… Buy when everyone is selling.  The setup – if complete – would look to hit $88,888 (ish), which would be a 44% move from the breakout location.  I will remind you that Bitcoin posted a 40% Monthly Candle for October.