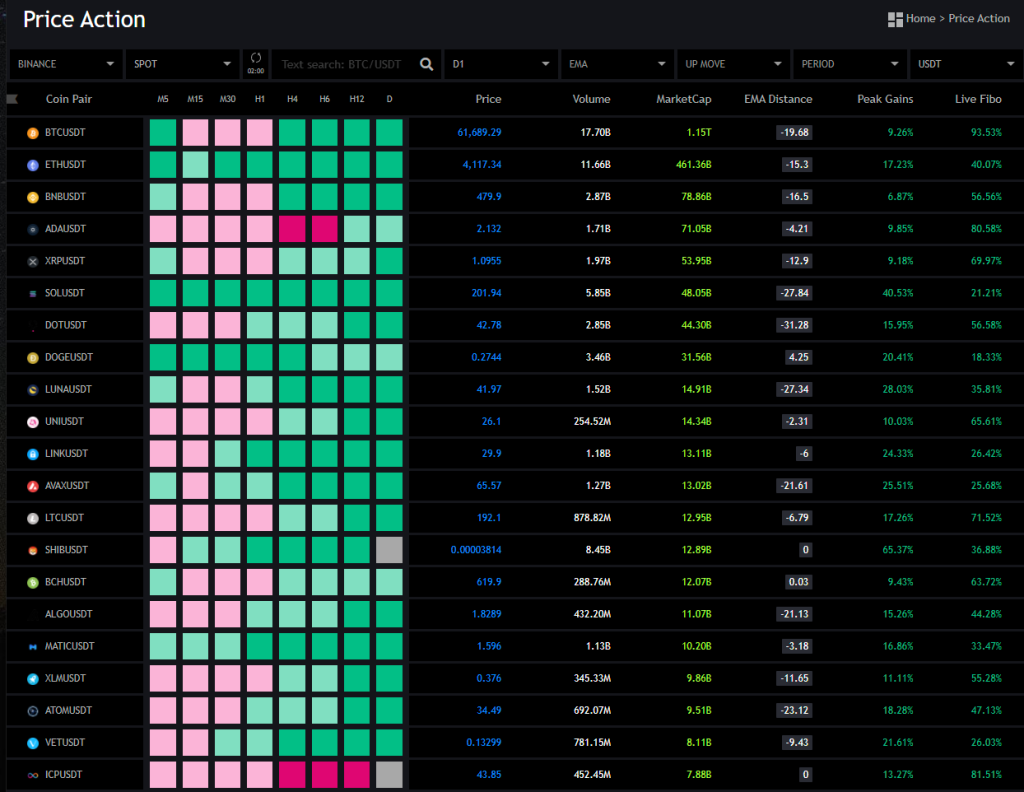 HOLY SHIB is back with vengeance this week and really all coming this weekend as opposed to during the actual week.  RUNE scored some huge trading volume which makes it a force to be reckoned with as well.  RUNE is currently up 80% in just the last six days, including today, say call it five and a few hours.  Certainly, something to watch in the coming week.  AVAX, LINK, DOGE, and SOL all posted some really nice 2-digit Weekly returns as well.

LTC, ADA, AND XLM are moving within a .75 to ETH while ETH is moving in a .78 to BTC.  Cardano (ADA) specifically has been in the news a lot lately because of its smart contracts and projects like Paribus trying to recreate the kind of magic FTM and SOL had with some of their first projects.  No doubt all eyes will be focused heavily on all NFT related cryptos in the coming months.

The Greed has died down slightly from last week.  Pushing a 72 currently as opposed to a 78 that was posted last week.  Pegged at 100 and we have another reason to be very cautious.  Until then, we watch and analyze.  The 70s are generally a good time to be trading, even into the 80s for that matter.

Nothing earth-shattering this week in regards to Volume.  The New ATH, which came on Wednesday, October 20th had some depressing Volume for how historic the moment actually was.  That is actually a fairly good thing as far as consistently climbing up the ladder as opposed to getting shot up with a cannon.

Outside of that, Saturday has some of the lowest Weekend Volume all year and the overall 30-Day Average is still relatively sideways.

Bitcoin Dominance had a bit of a ride this week.  After a successful Break and Retest of Local Resistance, the Dominance continued to rise for a few days, capping out at 47.72%.  After that, there were four sharp days of decline and actually reaching a Low of 44.39% on the fifth day and retesting a previously tested Support Zone.

Today brings a new day but once again, Dominance sits underneath the downward sloping trend that has provided resistance a few times in the past already.  We look for this to only be a small dip in the road and for Bitcoin to challenge this zone and recover the Support on its way to 50%.  Another failure this week could be a very good opportunity for the Alts to Shine.

There was a very small Gap at $61,650 that was easily filled by Friday’s Price Action.  What is very interesting is that the Open on Monday matched the Close last Friday and that is very rarely the case as two full days traded while the CME Futures were closed for business.

Be that as it may, CME has had a fairly good start for the first few hours, currently up $825.

It would currently take a loss of about $18,000 in order to turn this Green October into a Red October.  That is about a 29% drop from the current price.  Trust me, it’s more than possible with seven days left to trade in October.  Luckily, the trend is up, the momentum is up and the Greed is up.  It would take a fair amount of FUD to knock this back before the 31st.

The Weekly shows that the Bulls were strong enough to push the Bears all the way back to a new ATH but they fail to keep the price in that trading area.  The Bears stepped in and not only stole the Bulls’ thunder but pushed below the weekly open from seven days ago.  It’s a bit like walking up to the bride and groom at their wedding and smashing their cake with a sledgehammer.  Sure, there is probably some good cake left on the table but what a mess to clean up.

The Bulls have their work cut out for them if they want to turn this new ATH into a short-lived thing of the past.

Well, Bitcoin did it.  We said last week that Bitcoin was on Cruise Control and that it controlled its own destiny to break the previous ATH set 6-Months ago and it did just that.  Last Wednesday, Bitcoin reached a High of $66,999 – certainly not an easy number to forget!

Immediately after posting the new ATH, Bitcoin dropped 11% or about $7500.  Bitcoin has been dancing the tango with the 9 EMA on the Daily and was flirting with the idea of dropping down to the 20 EMA just for some Support but has yes to need that secondary attaboy.

A drop down to the $53K area and likely the 50 EMA at the same time is certainly on the table if we start seeing heavy profit-taking and impatience come later in the Morning on Monday.  Other than that, a reclamation of the $65K area and another new ATH is really all the Bulls have in mind.  It’s time for them to get back to work.