One glance at the Top 5 by Market Cap and you should have a pretty good idea what’s going on.  The market is tired and it officially has no problem letting everyone know.  Every Top 5 coin is down 5% or more in the last 7 days and Bitcoin itself is one of the leaders at over 12% down.  Global Market Cap has taken a major hit in the last few weeks and now we just barely sit over $1.6 T. 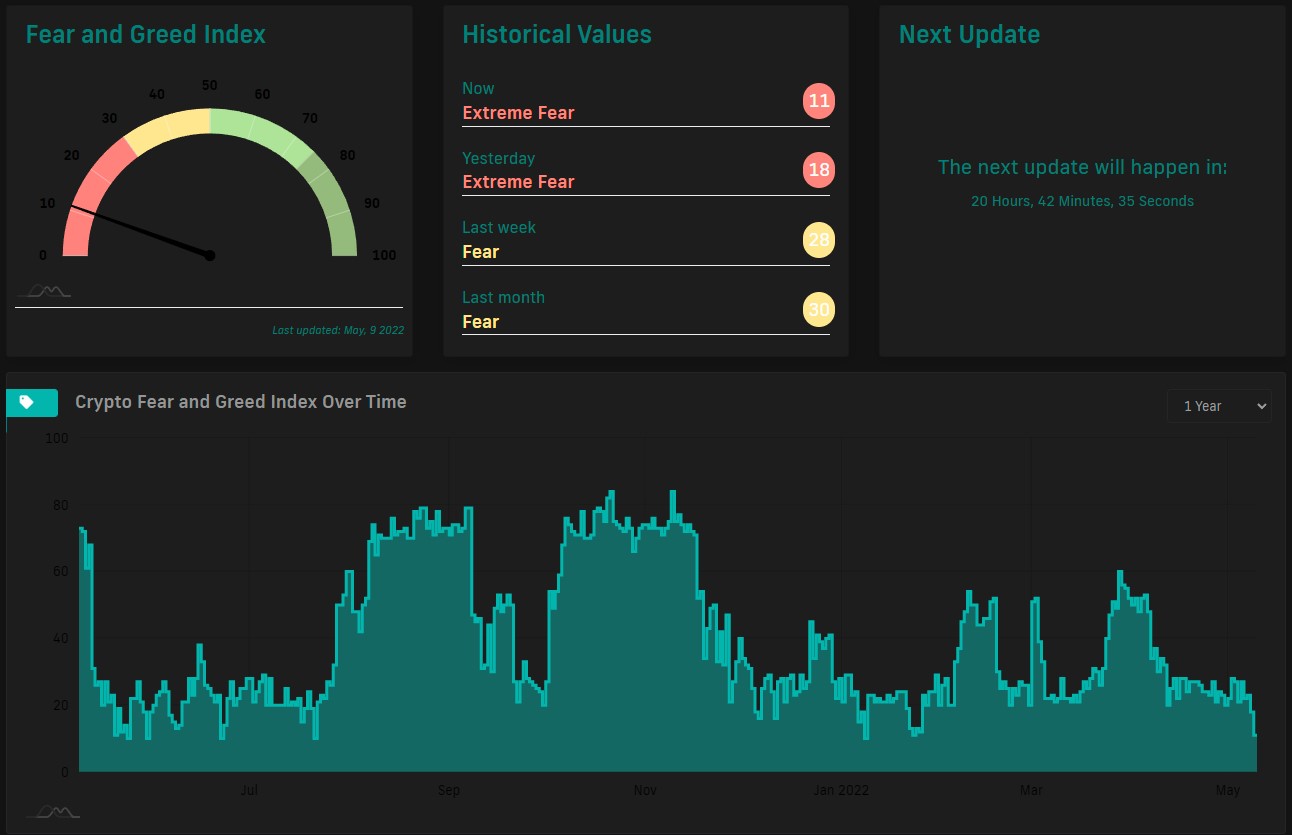 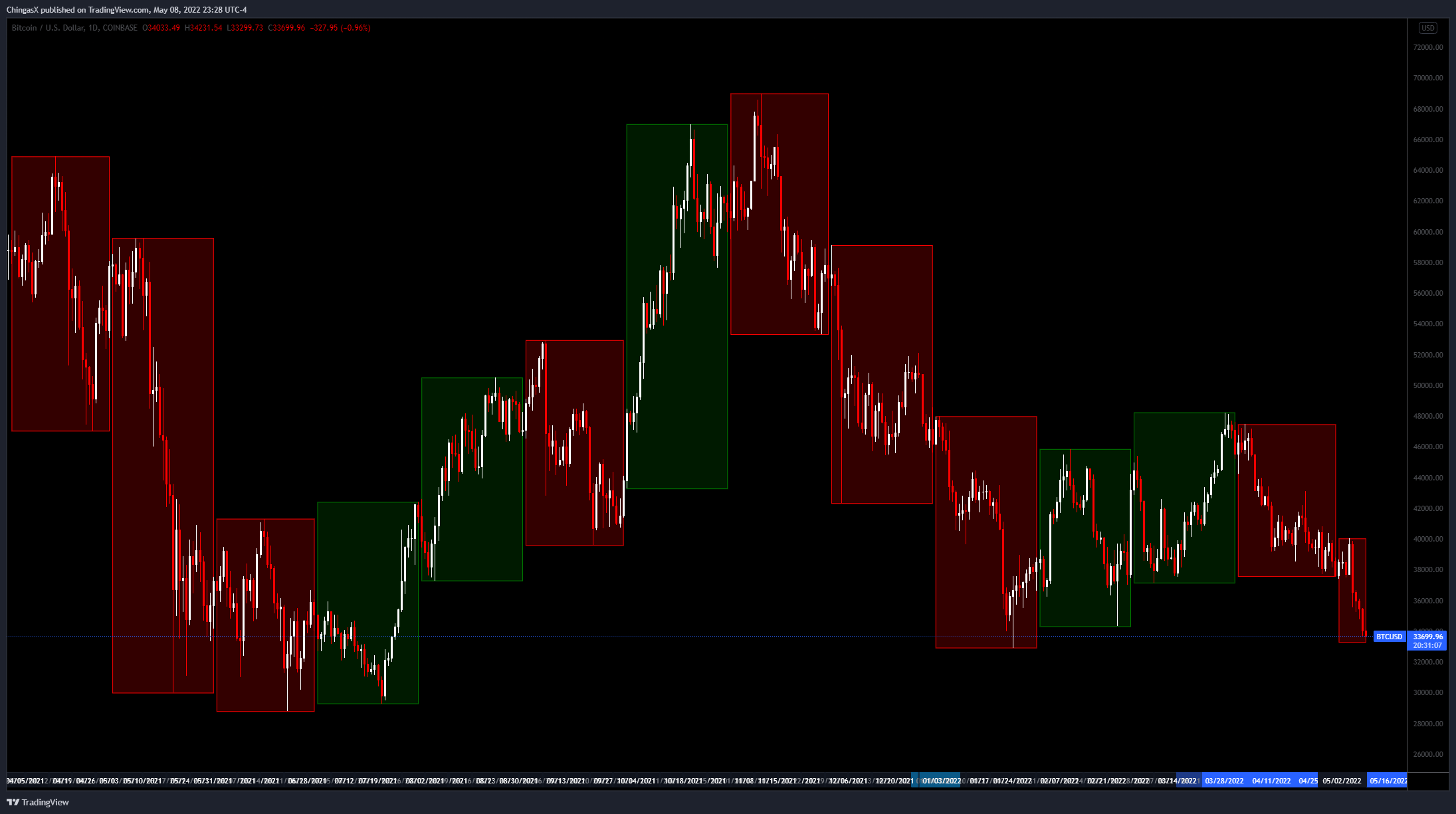 The level we have talked about in the past that will officially confirm he break of the upward structure is $28,800.  We are still trading above this level.  It’s unfortunate that we need to see such a low level just to confirm  downtrend that is now in it’s 6th month but we don’t make the rules, we just follow them.  In trading, we do have something called “Sweeping the Lows” and it’s exactly what happened last summer.  We created the Low in May.  We swept it and slightly traded below it it June and then we tested one last time with a higher low in July.  The action causing these lows are a completely different story this time around. 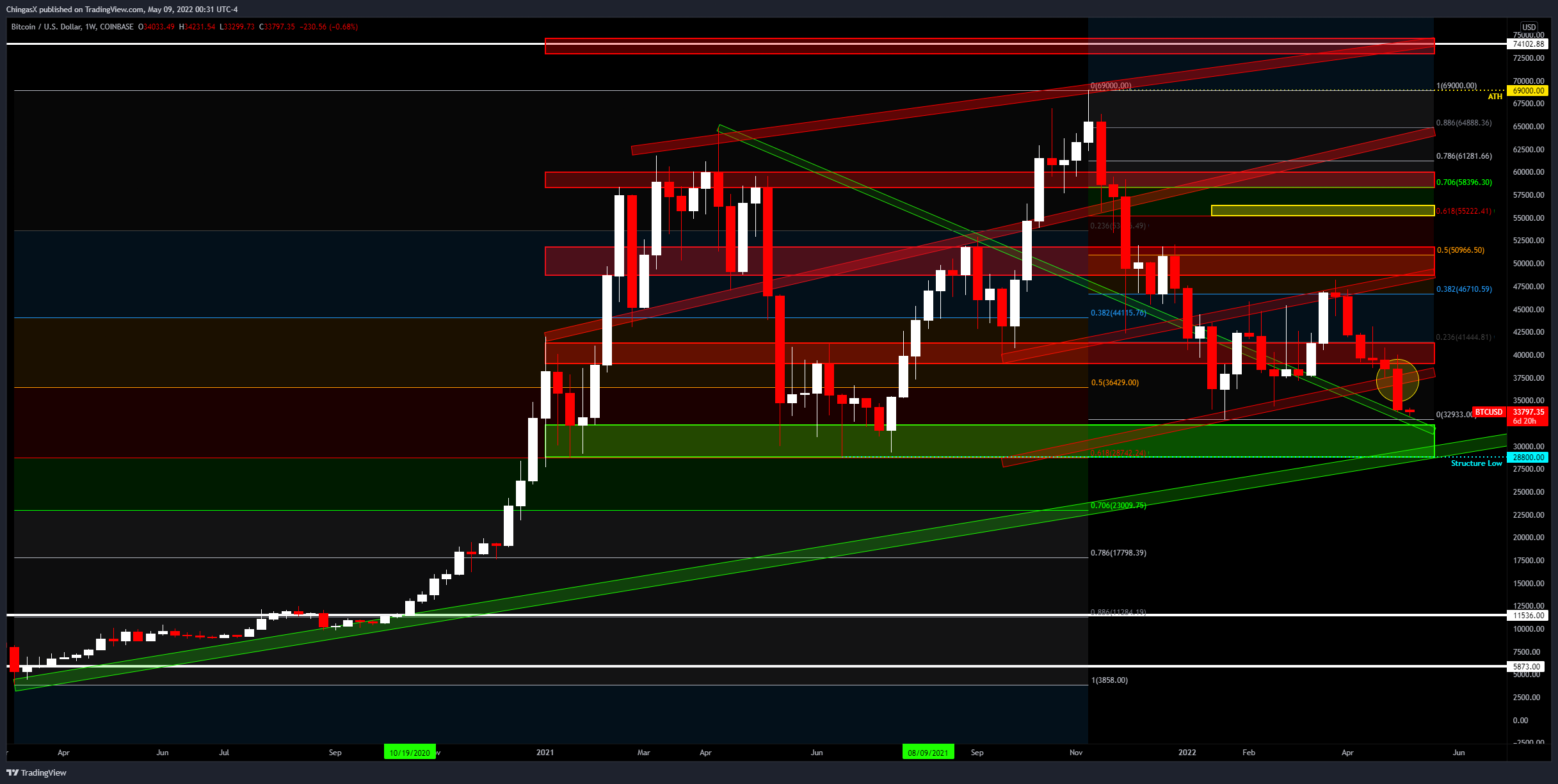 The 4-Month Channel has been invalidated to the downside.  Bitcoin weekly has not only closed below the channel, it obliterated it on the way down.  Generally speaking, when a level is not only broken but it it broken with force and volatility, it means that it’s only just getting started,  Bitcoin at $33K sounds low when it was once at $69K but Bitcoin at $33K sounds really high if you see Bitcoin at $20K or under.  The Weekly did finally stop dropping on our Internal Trendline (the green one sloping downward from the $66K High).  We also have a trendline from March of 2020 and the Structure Low of $28,800 all joining forces over the next three weeks. 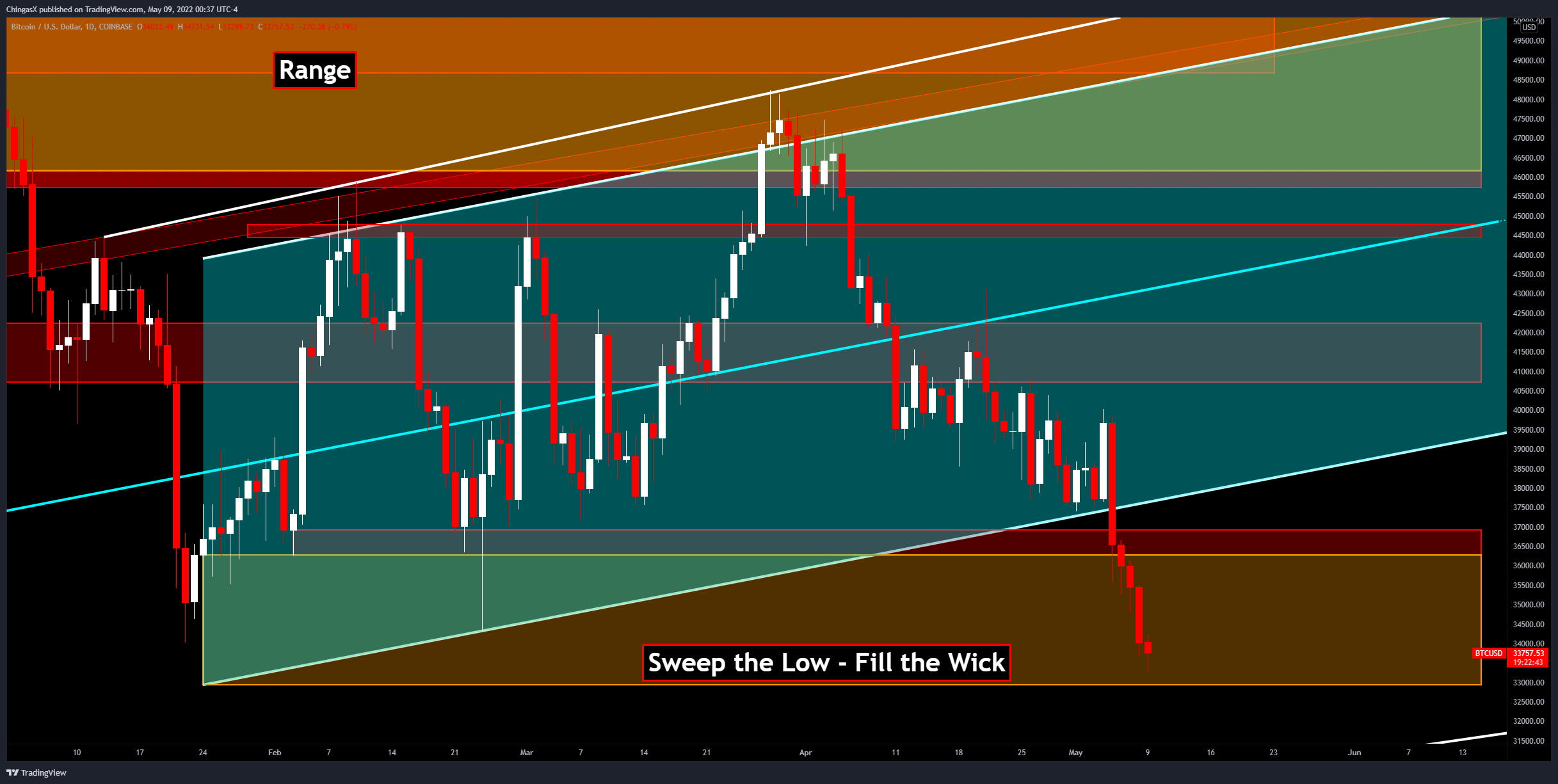 As we mentioned above, Bitcoin has lost its Channel.  That was the channel that could have gotten Bitcoin all the way back to $55K before a massive downward spiral.  We have seen in the past channels get broken and it’s nothing more than a fakeout.  The price rallies back to the channel but instead of a bearish retest, it breaks back through and that becomes a shakeout.  With so many targets down below, this seems unlikely.  However, there is always the chance for a retest.  The retest would be the underside of the channel.  We could see anywhere from $37,500 – $38,000 only to find resistance and head down for more lows.  The complete fill of the January wick would be at $32,933 and we were very close to filling it only an hour or so ago. 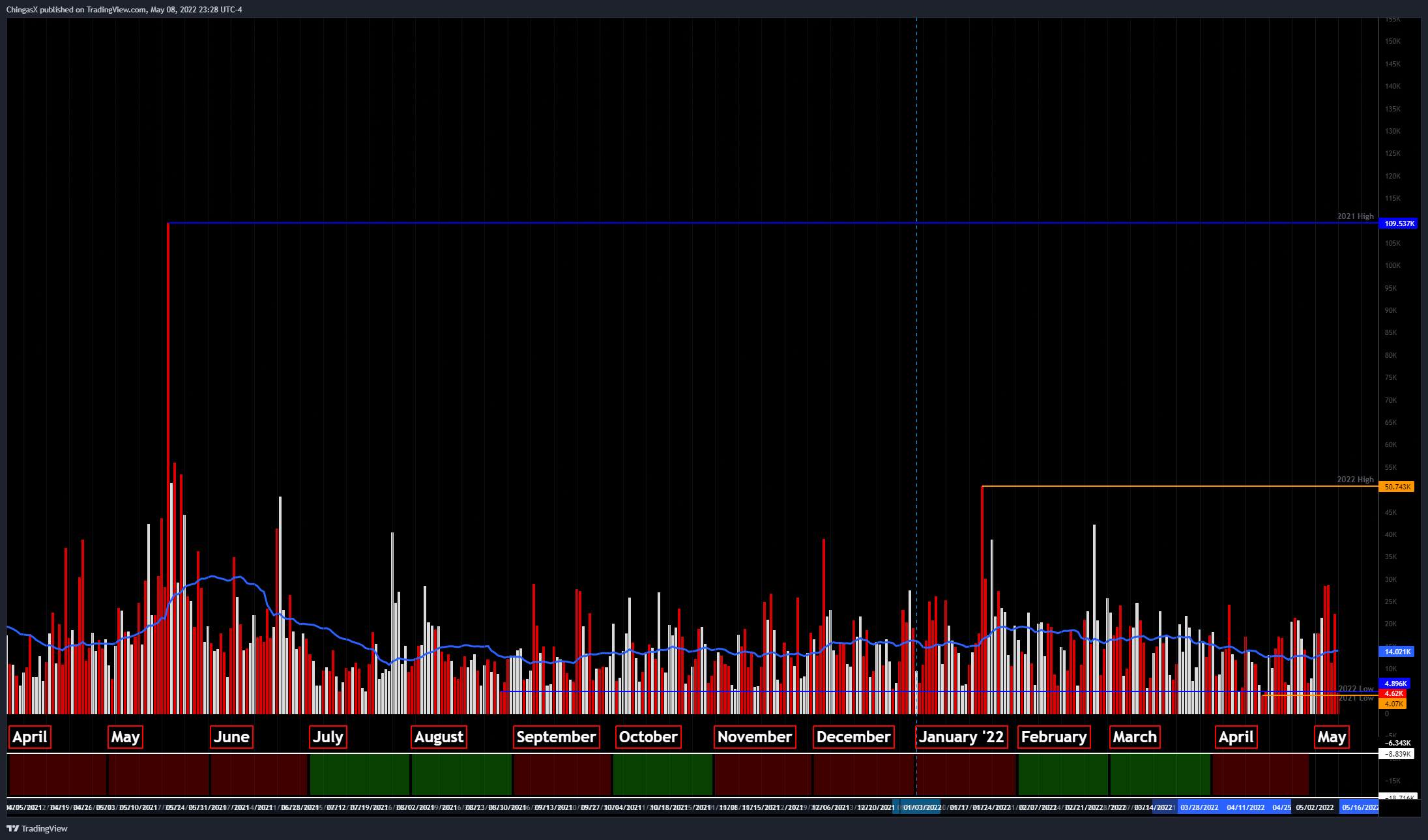 Volume is finally on the rise and it’s all due to Sell Pressure.  The Bears are controlling this market and they simply never seem to run out of Bitcoin to sell.  A cross between Miners, Whales and Retail all panicking and getting shook out of their holdings.  Although it is nice to finally see a rise in Volume, it’s a shame it had to be on the Bearish side. 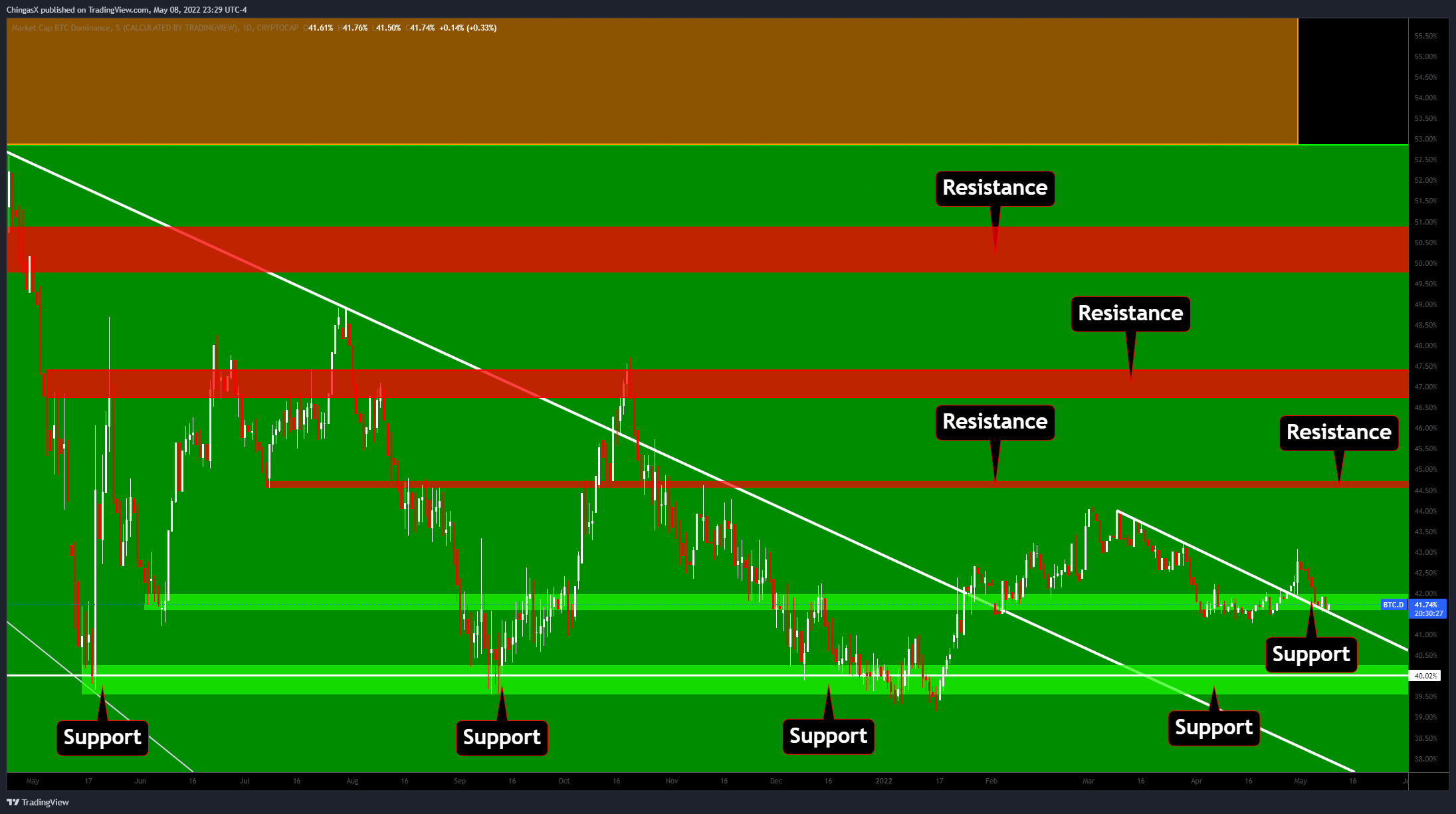 Dominance continues to hold 41.5% and continues to get rejected at 42%.  How this area continues to hold as support is nothing short of amazing.  Even the downward sloping trend that was once resistance is proving support after the retest.  With Bitcoin values dropping as hard as they are and barely seeing dominance move at all, it tells you the entire market is dumping in tandem. 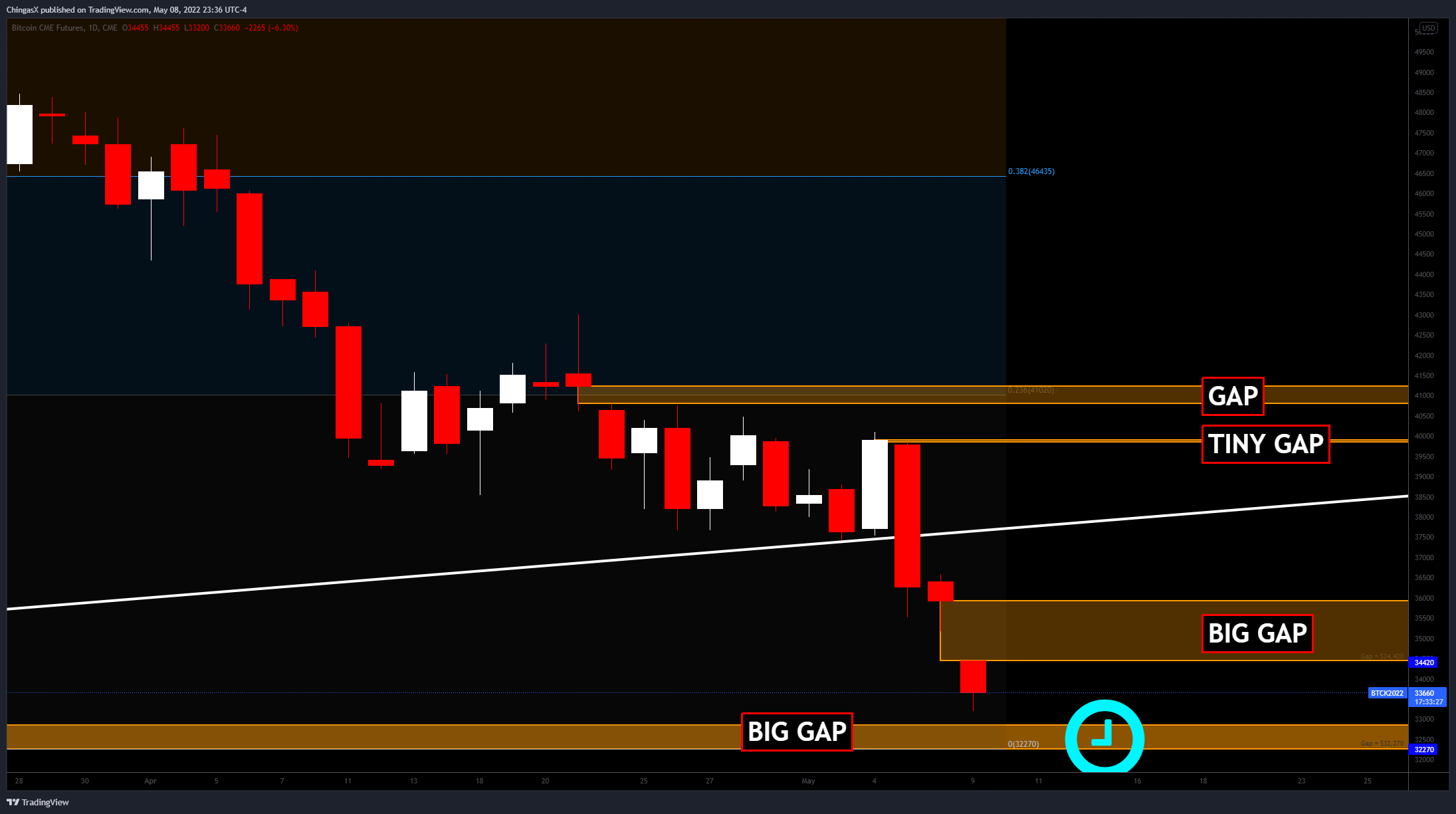 We talk about this chart all the time because it plays out 95% of the time.  We expect to see $32,270 on Futures because that is the bottom of the Big Gap we created back in July.  In fact, it was the gap that was created on the run to the new ATH.  Now, $35,925 is the top side of the newest Gap that was created on todays open candle.  These generally get filled within a day or two but as you can see in the example gap below, sometimes it will take a few months.  We have many more gaps under $32,270 but let’s take a look at the closest one for now. 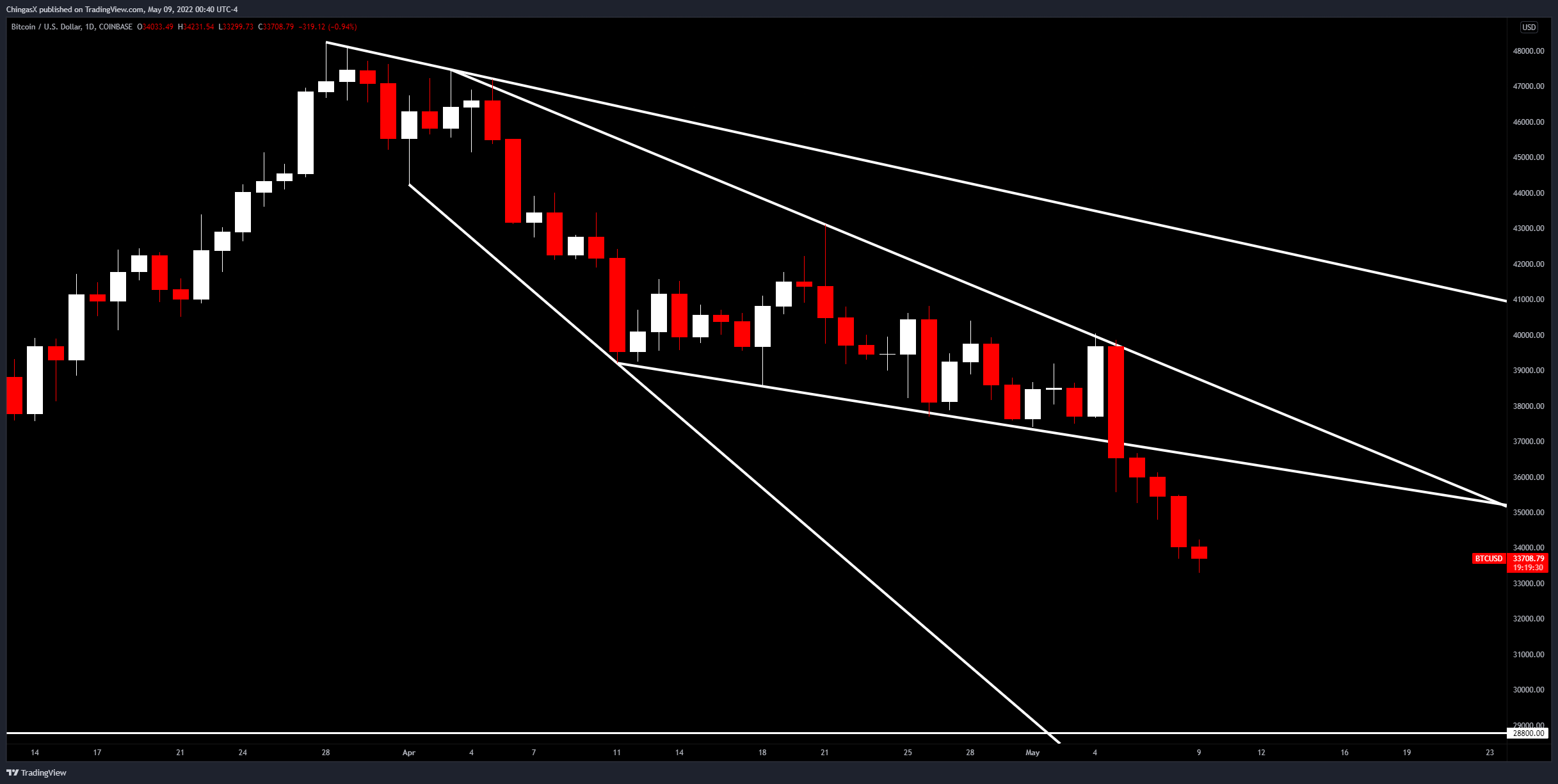 The FEAR is here.  The PANIC is here.  But have traders capitulated yet?  Nah.  Not even close.  This is downward pressure and this is ugly but it’s not even real Pain just yet.  MAX PAIN is Bitcoin back in the teens.  Something we may or may not ever see again.  Some traders will try to tell themselves that this time is different and they may or may not be right.  This time can be different because there are many external factors that are different.  Different traders, different institutions, different regulations, different geopolitical events at play.  It’s just different.  More mature one could say.
Different or not, one thing is for certain, we are a long way away from the ATH of $69,000.  We can also say teh trend is very much down.  We can also say that the Bears have been in control long enough to build enough momentum to shatter that channel support.  There are plenty of levels in-between here and the structure low of $28,800 but the question remains, are any of them strong enough to hold the line in the face of this momentum push?