Although this recap is mostly all about Bitcoin, it’s still important to discuss the overall health of the Top 5 as numbers 2-5 do have sway in the altcoin world.  All Long-Term trends are down across the board and by Long-Term, in this case, we are speaking to the Daily Trend from the PAS.

It was an all around rough week for Crypto enthusiasts as the market bled deeply over the weekend.  Bitcoin itself only lost $1000 and is currently down less than 2% from this time last week but some Alts are down 20-30% from this time a week ago. 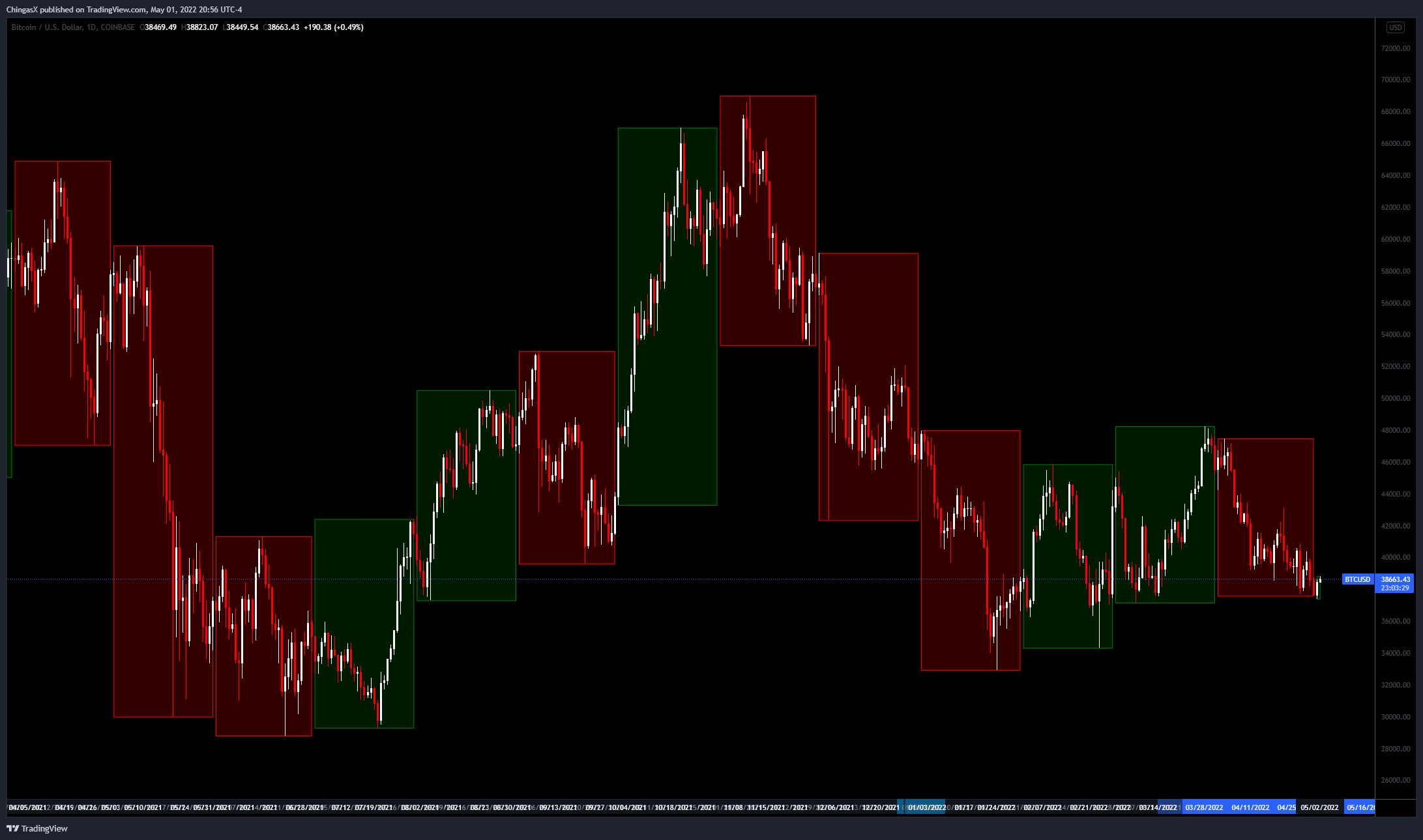 Welcome to May!  We closed the Monthly candle down today so we get to speak about that for a minute.  We were hot on the trend for three months, starting in January.  We had a low of $28,800 and we have not broken that low yet.  With each month, February and March, Bitcoin was able to make a new monthly high and maintain a major low that was higher than the previous months.  All that ends in April.  Although April just barely was able to maintain a higher monthly low, it failed to make a new monthly high.  The month itself posted a 17% loss.

All things considered, maintaining any low above $28,800 is good news for the Bulls.  Traders will be looking to make something out of May as April was nothing more than a bloodbath for most. 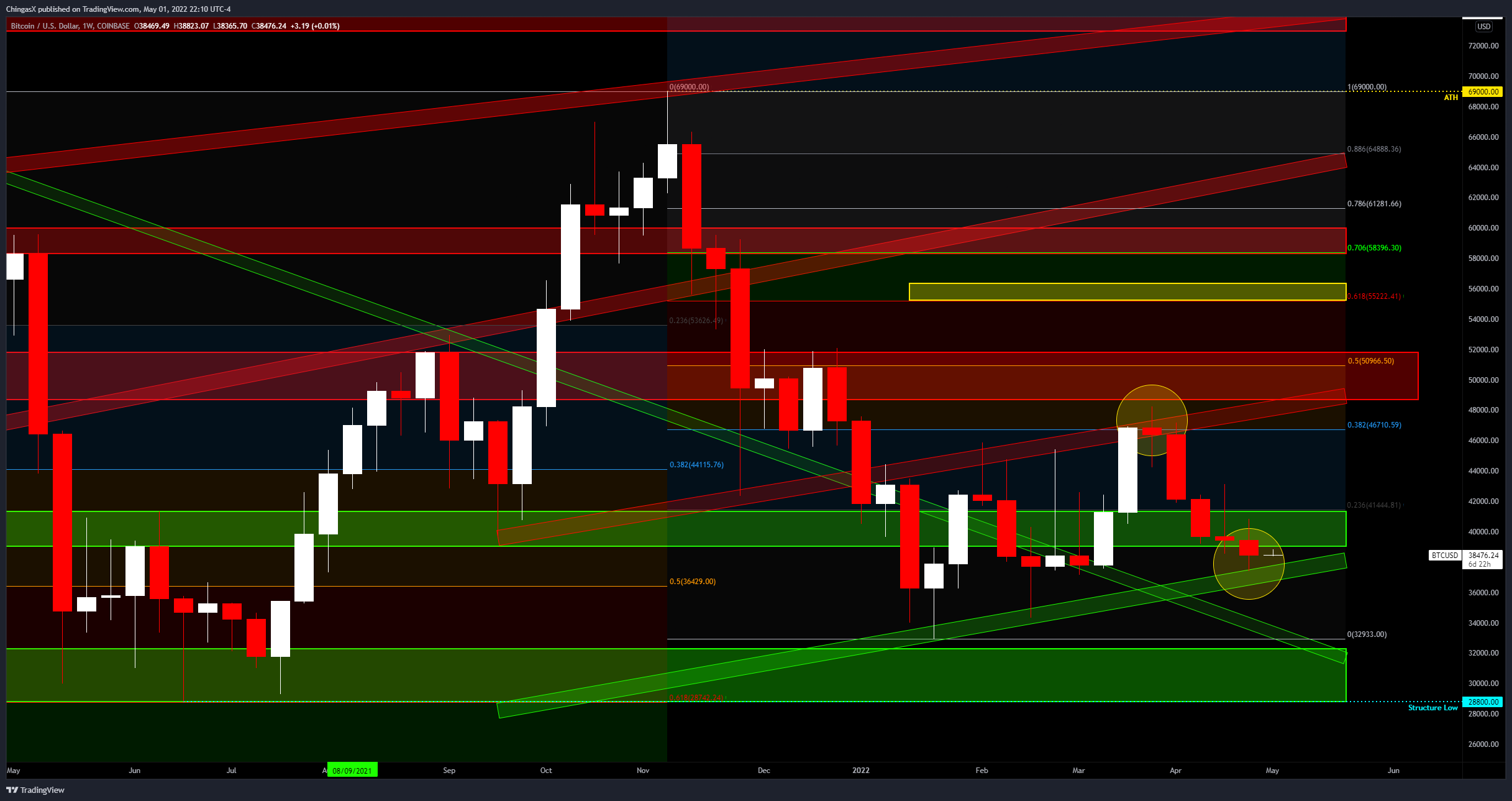 Bitcoin Weekly has lost another $1000 per coin but the low did come straight down to support and found a small bounce.  This is important because it reinforces that level of support.  Don’t get too excited because the bounce was not a big bounce and this weeks candle can easily slip right through that support and dump hard.  This week we will look to see confirmation of that support level holding while Bitcoin now has an actual target to the high side.  That target is the top side of the Channel and if we were to see that on the weekly then we are looking at $47,500 – $48,700.  Now, that would be a 26% move up and about $10,000 from our current location, so, we don’t expect this in a single week.  The good news is that the target level increases every week. 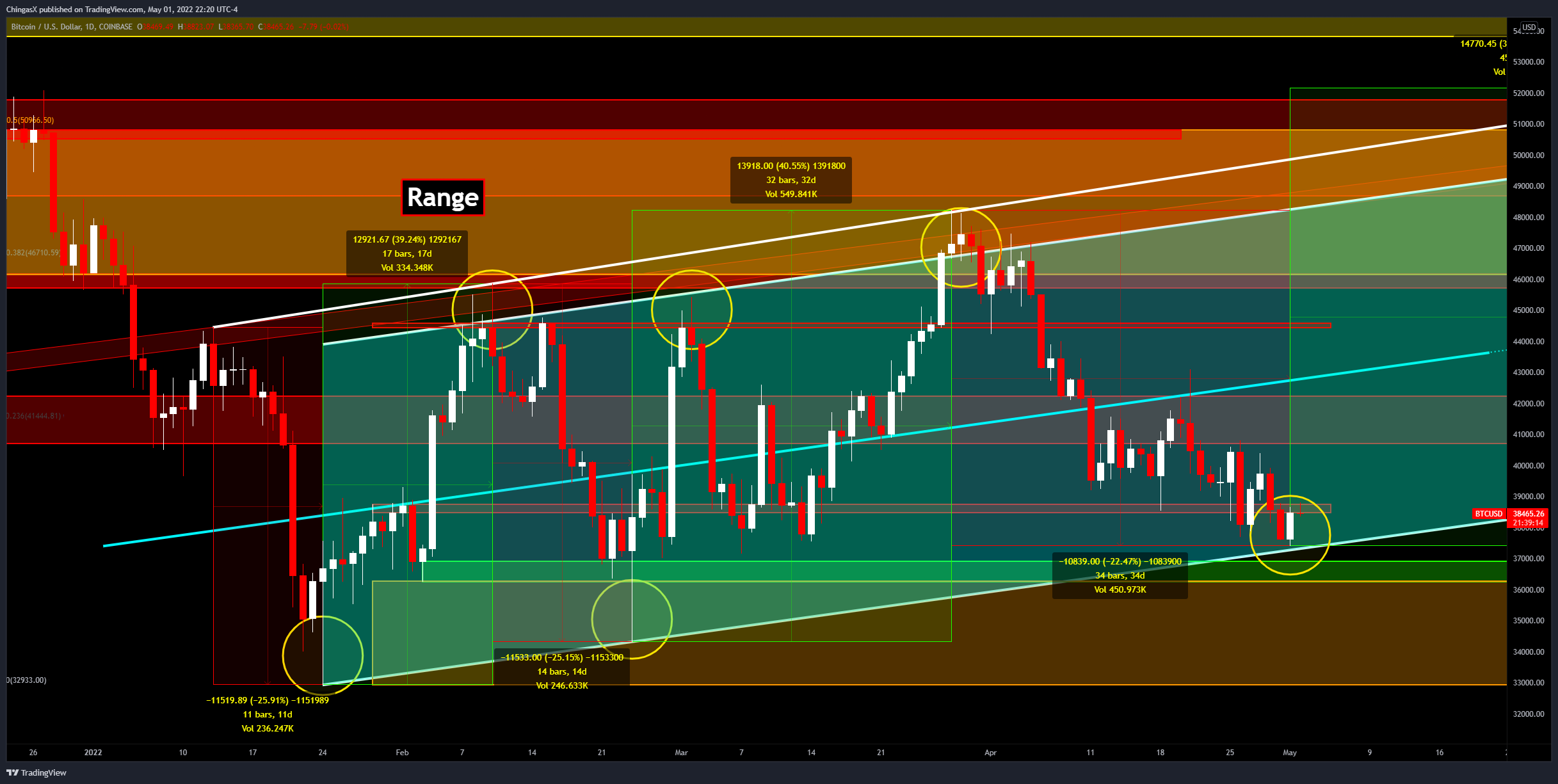 The Channel from January was tested for its third time yesterday and Support was indeed found.  The two previous levels were on very large wicks that represent a ton of buying in that period.  Yesterdays candle was not much more than reclaiming the open of the previous day.  This does add a bit of hesitation across the board as to whether this level will hold or not.  Be that as it may, her we stand, with Support from the Channel. 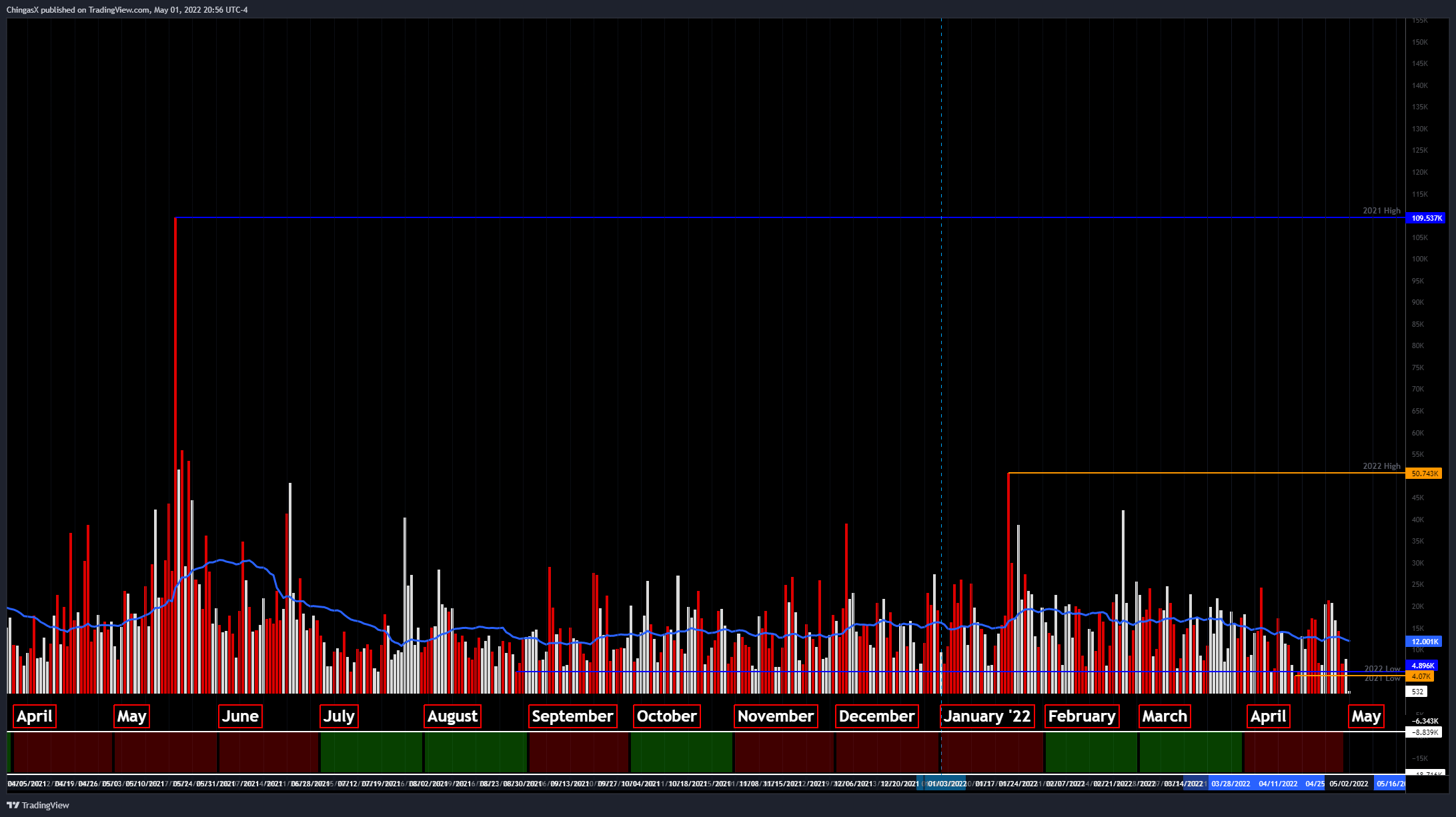 Volume has not looked good in a while and it continues to not look good.  The shame here is that the volume continues to trend lower and lower, day after day, week after week and month after month.  Volume helps to tell the untold story of interest and with Bitcoin very slowly rising since January and Volume slowly dropping the whole time, that paints a fairly ugly picture. 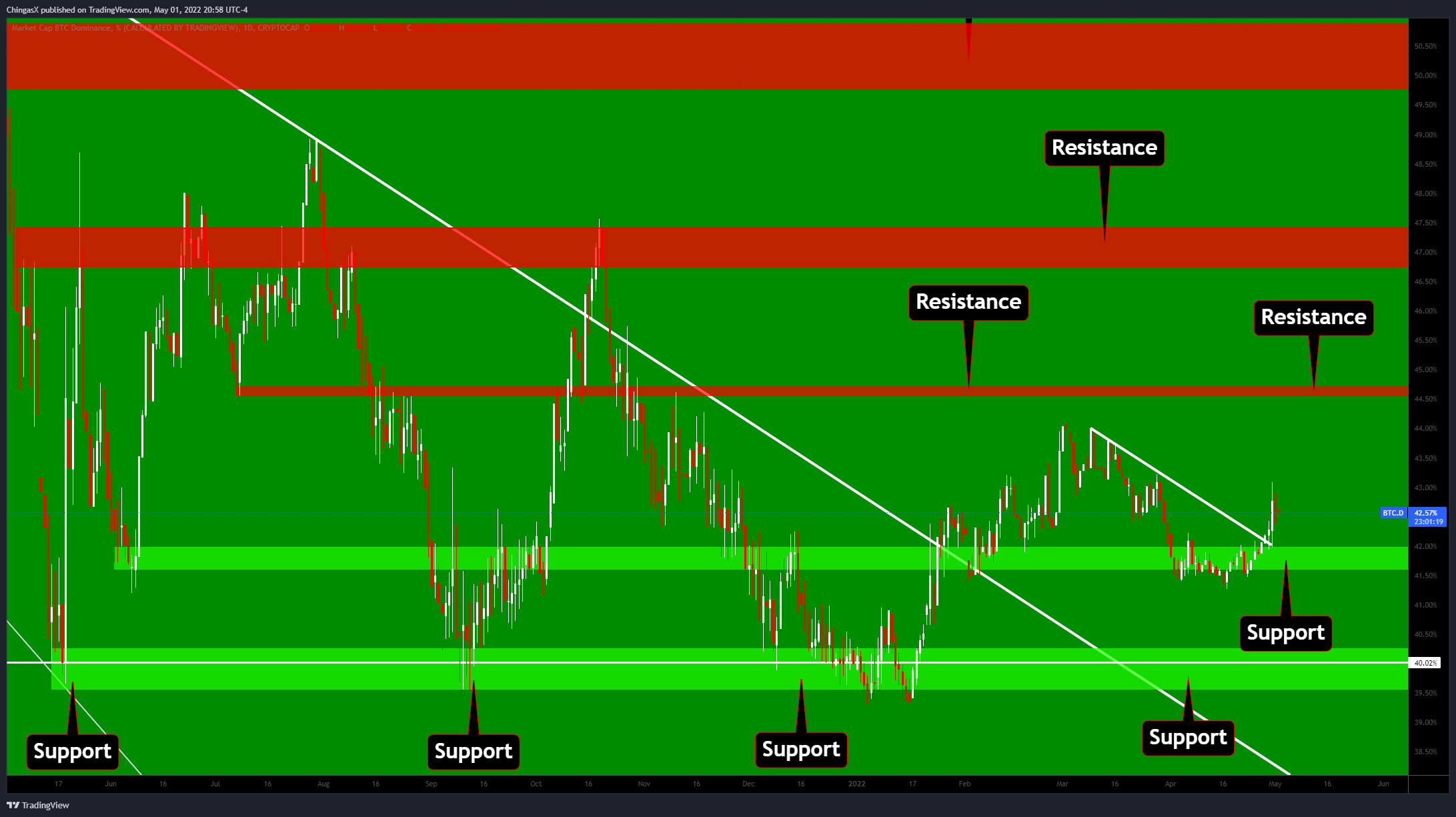 Bitcoin Dominance was finally able to make it above the local and reoccurring zone that is struggled with for the last few weeks.  This only happened because Bitcoin slaughtered the Altcoin Market with vengeance.  The continual whip-saws up and down finally caught up with the Alts and they were no longer able to keep up with all the chop and the massive monthly loss of the King.  That loss in the Altcoin market was enough to propel Bitcoin Dominance even though the weekly candle was down about $1000. 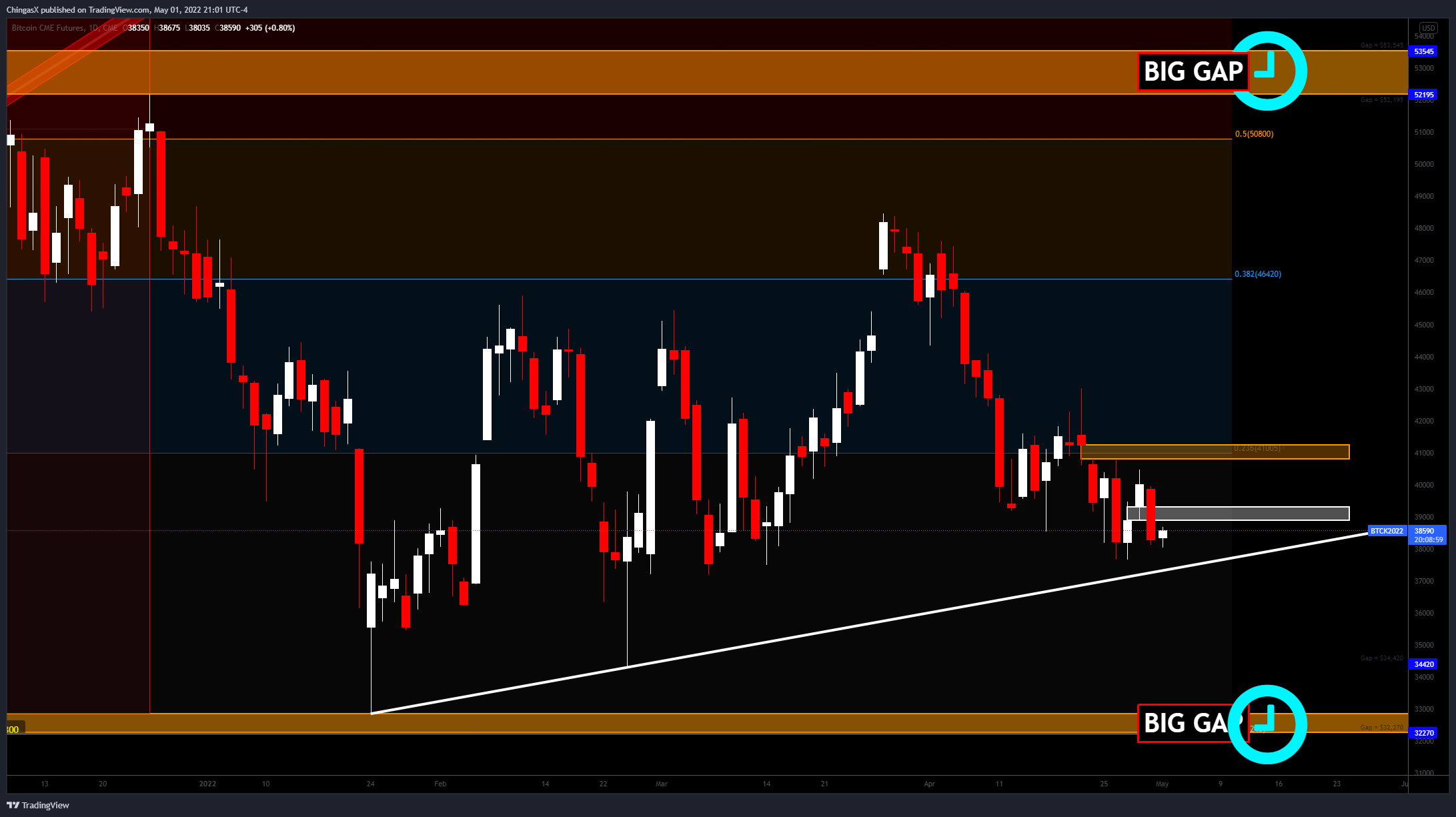 The gap from two weeks ago still remains above current action. We did have another gap prop up a few days ago but it was quickly sorted out by the action on the following day.  This leaves Futures in another dilemma.  Do they pop up and take care of the upper gap or do they leave it in pursuit of the gap down at $32,270? 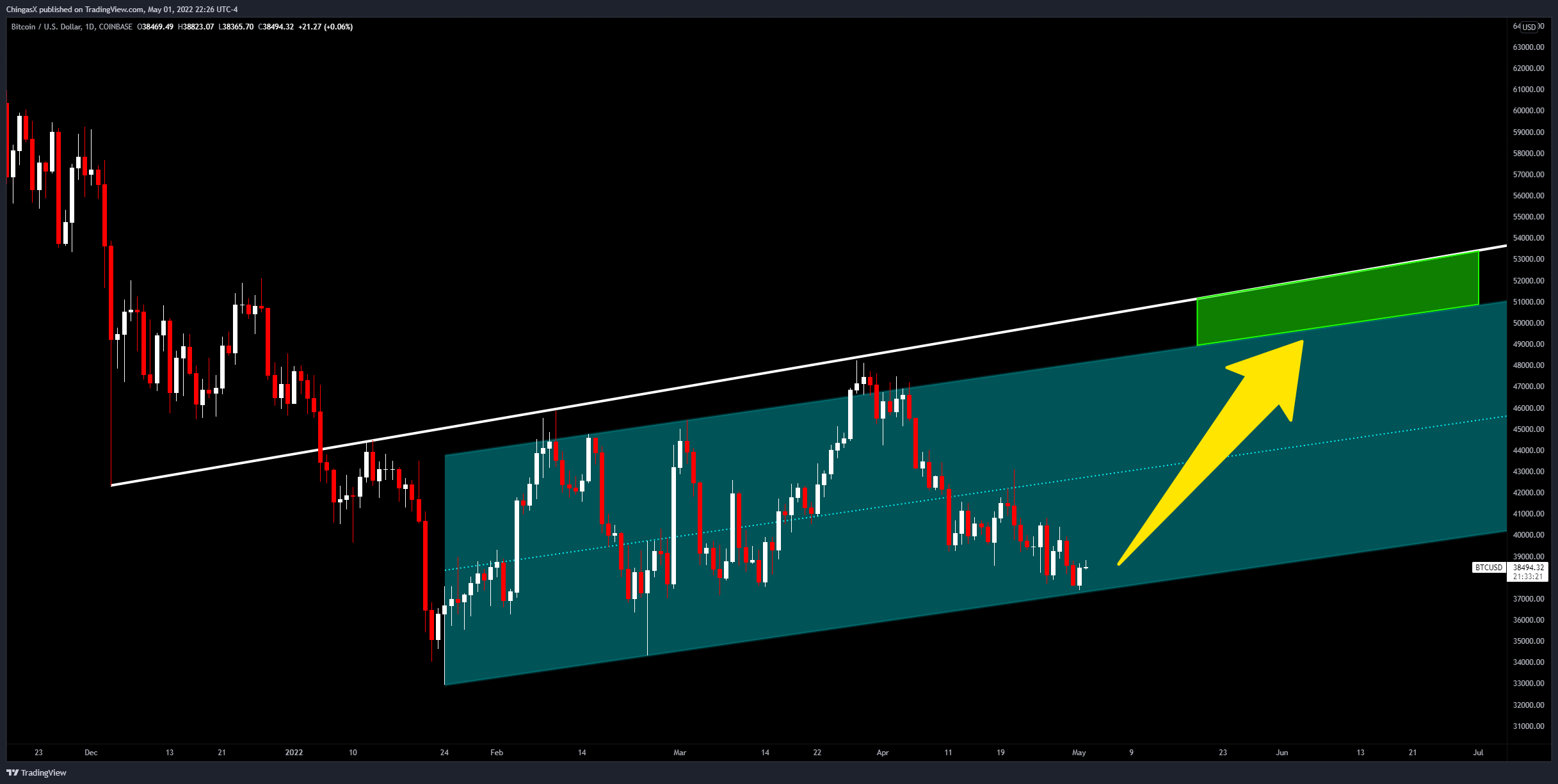 Channels do not always play out but they are watched by many traders across the board.  The reason why this is important is because these are longer trades with fairly consistent results and very simple invalidation points.  If price falls below the channel – the trade is over.  This can often lead into fakeouts and traders getting scarred of taking positions but the ones who stay in the trade and only have two levels of importance will generally do well.  All they need is an area to Stop out and an area to sell for profits.

Judging by the previous moves in this particular channel, there is an area above the channel that price seems to navigate towards.  It has also been tested four times – once as support and three times as resistance.

Traders do like confirmation and because of that, we may want to see one or two more candles close above the bottom of the channel before making any rash decisions.