LUNA, the last remaining survivor who once had a chance to turn things around, is joining the Death Spiral club of the Top 5.  Everything looks terrible, from Bitcoin down to LUNA.  That being said, Bitcoin is still up 10% from where it was three Months ago.  This will become more important in the next section as we talk about the Monthly view. 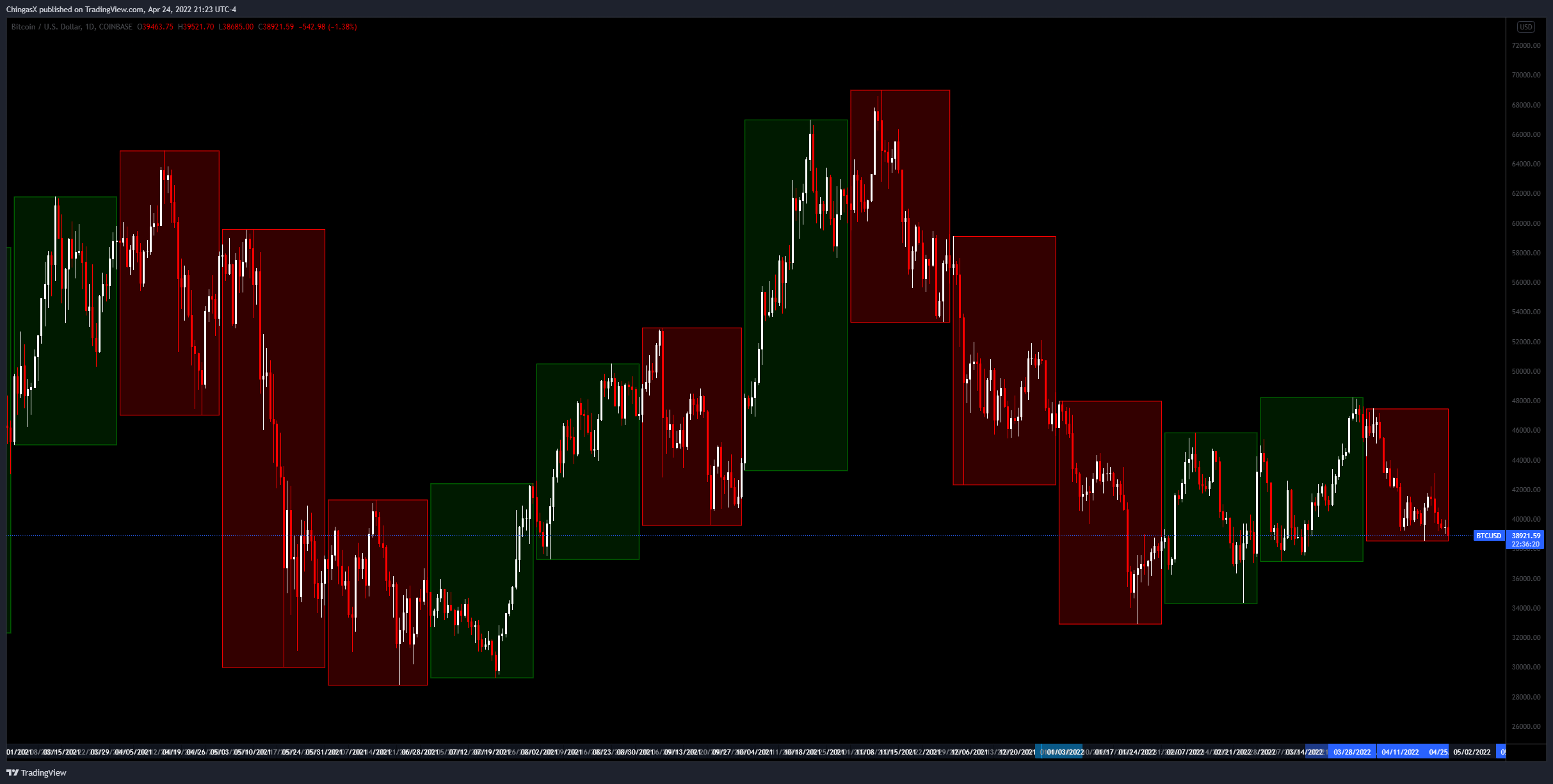 Once again, the Long-Term outlook for Bitcoin is still not really that bad.  All things considered, the Low is still a higher low, three months in a row.  Bitcoin would need to break $48,240 in order to put in a higher high than last month.  We still have another week left in April to see if Bitcoin can right its wrongs and put these Bears out to pasture.  The month of April so far has been a borderline bloodbath, essentially trending down all month long. 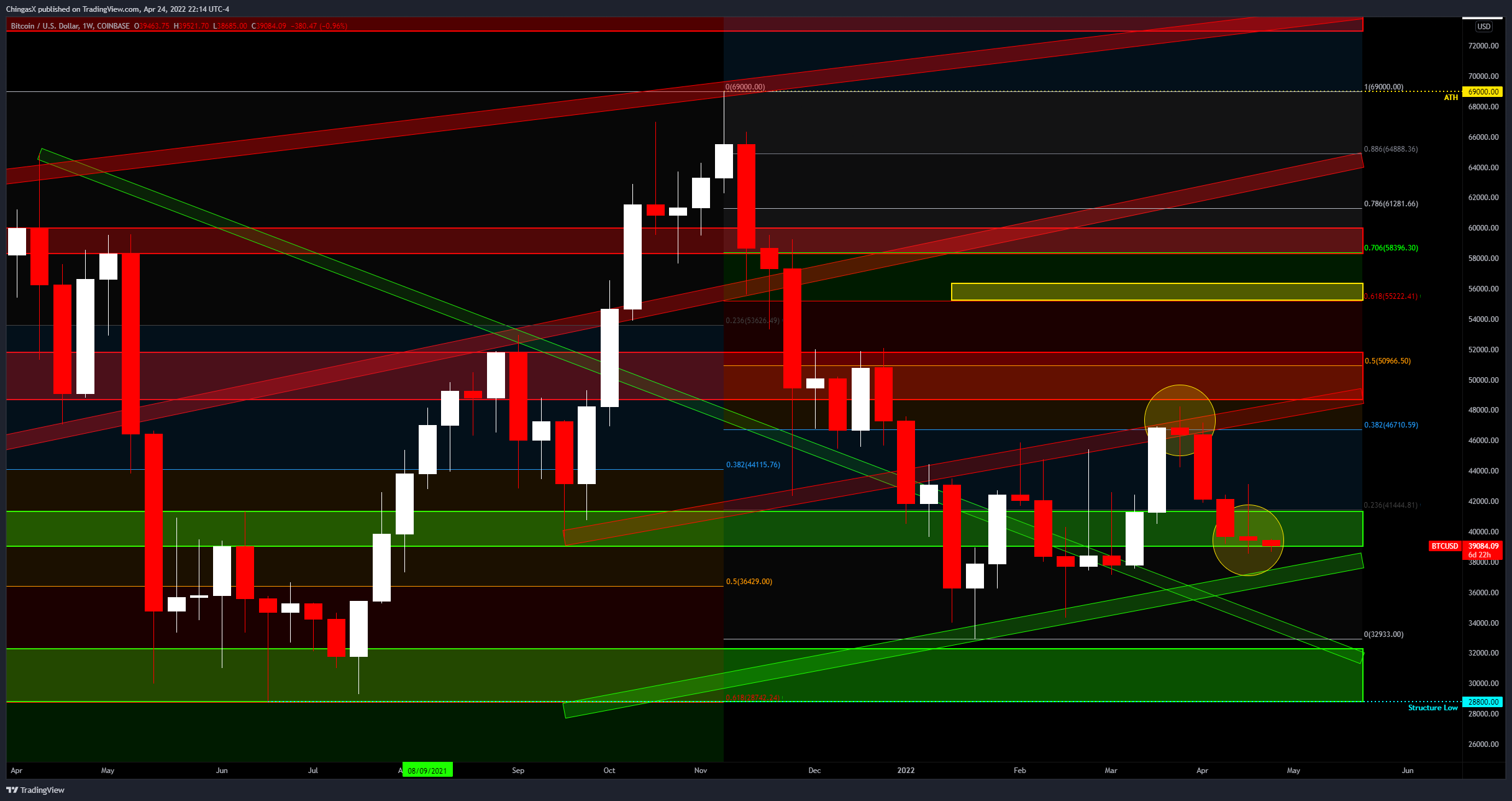 The support at $39K continues to hold even though Bitcoin did dip below it for a bit last week.  Our Weekly candle was able to close inside the Support Zone and therefore we continue to highlight that area as green.  Our current candle on the daily did trade below $39K as well and as of this writing is holding $100 over $39K.  The week has only just begun but all the momentum is with the Bears.  Now is the time if they are looking to rip the band-aid off but they have yet to make a serious move.  Always remember that Support is Support until it breaks but the more and more time we spend on an area, the weaker and weaker it becomes. 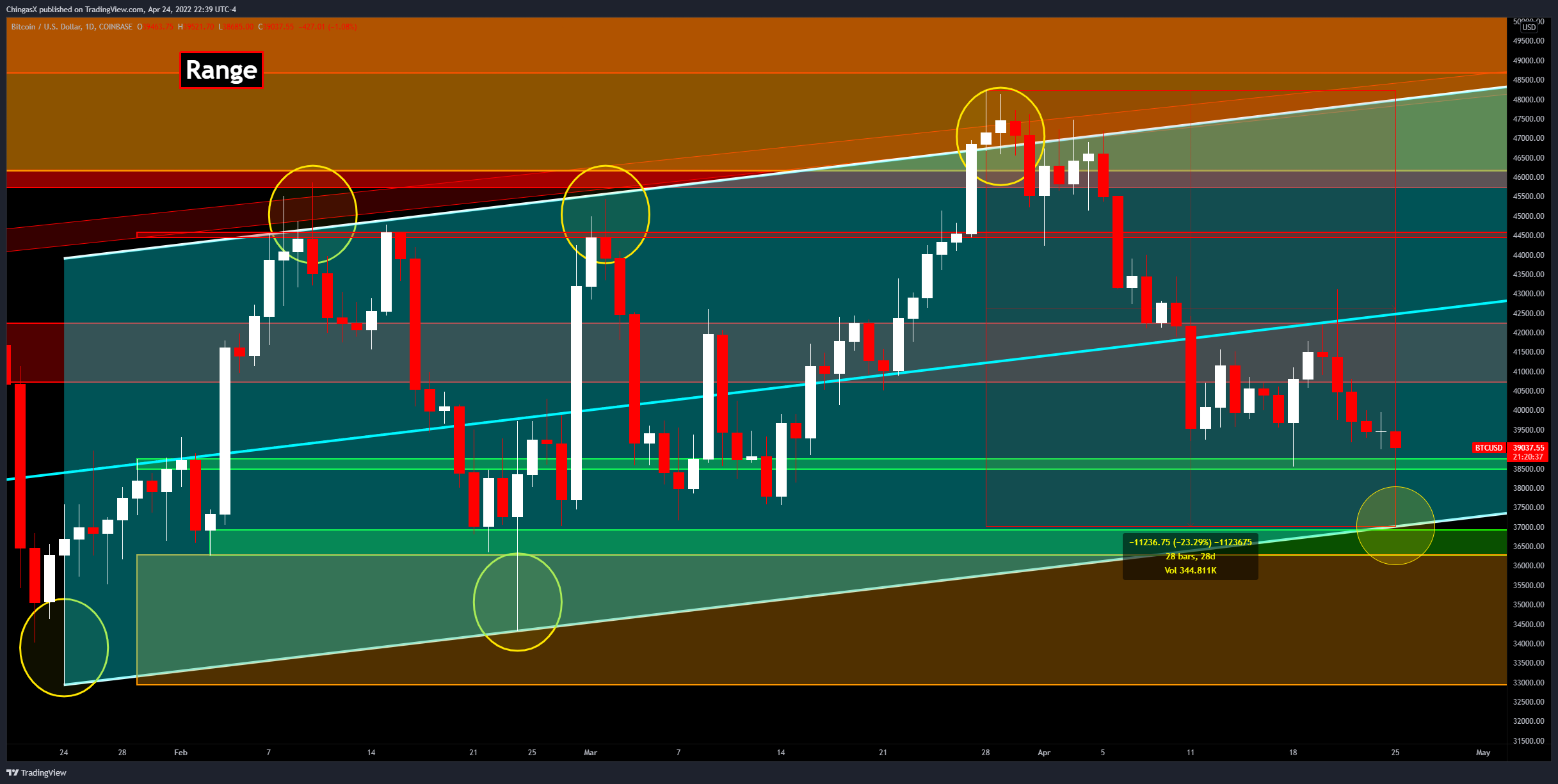 Bitcoin Daily shows a hyper focused Zone with a low of $38,500.  This area has held remarkably well over the last few days.  We did not tap down at our Channel low last week.  Perhaps we will this week.  We are still looking around $37K for the channel low, especially if we hit that later today and give the market a reason to reverse.  By next Sunday, that low is around $37,300 in order to touchdown on the Channel Low.

As mentioned earlier in this article, all the momentum is to the downside.  The Bears have had it easy for the last few weeks and the Bulls are simply out to lunch.  It would almost be easier to just take the hit and be done with it but the market hasn’t reached a point of capitulation just yet.  Just your standard fear and panic.  If the Bulls do wake up and want to defend something then $39K down to $37K is the sweet spot.  With that action in mind, we could be seeing a temporary reversal back to the top of the channel.  That could mean a rally up near $48-50K by the middle of May. 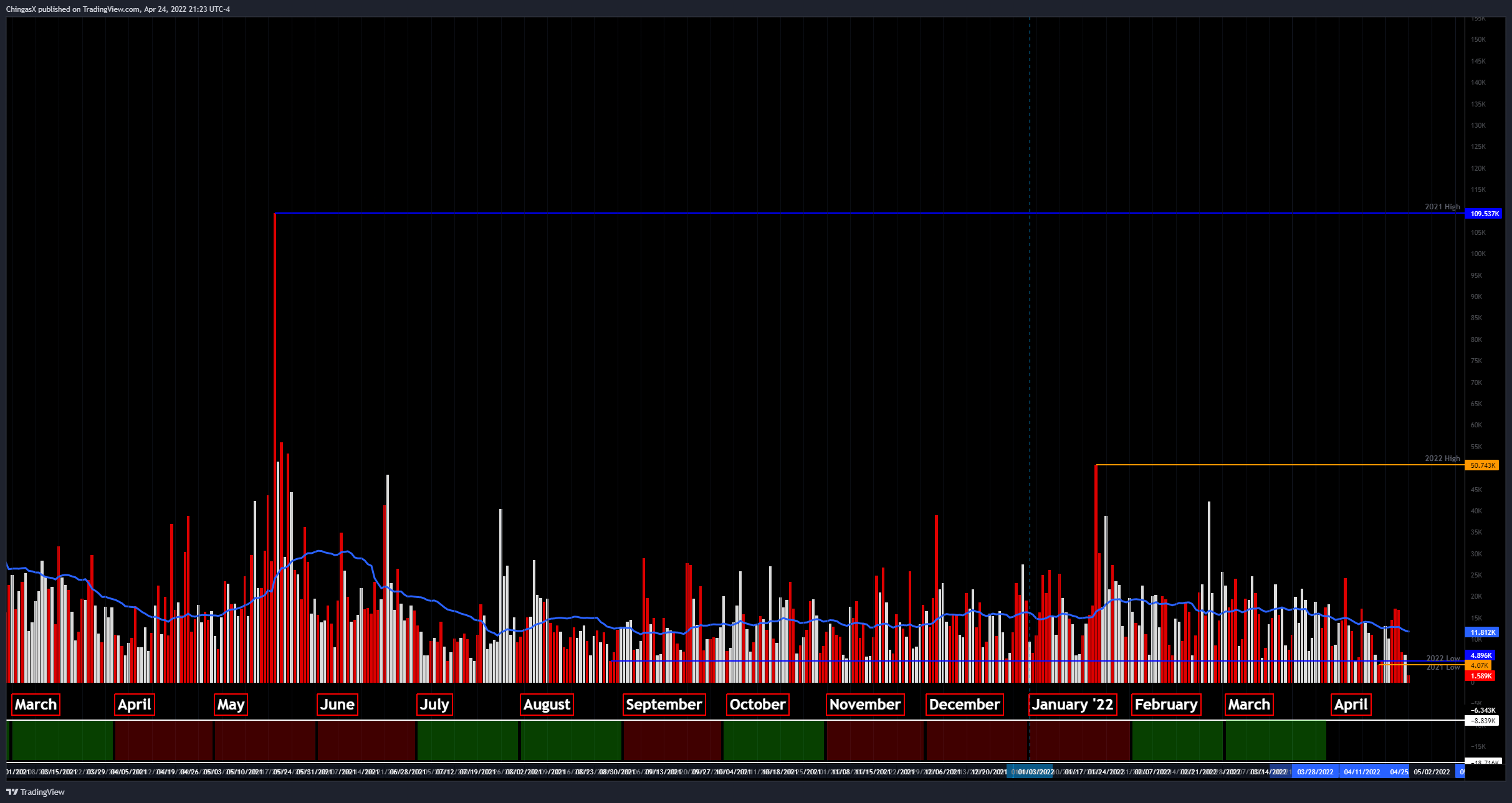 What is really disappointing still is the Volume.  Volume has been trending down since the beginning of February.  The real kicker here is that the volume is trending down while the larger picture is showing the action slowly rising.  This usually means that the pump is weak and losing sustainability.  This is why the Bulls struggle at every level. 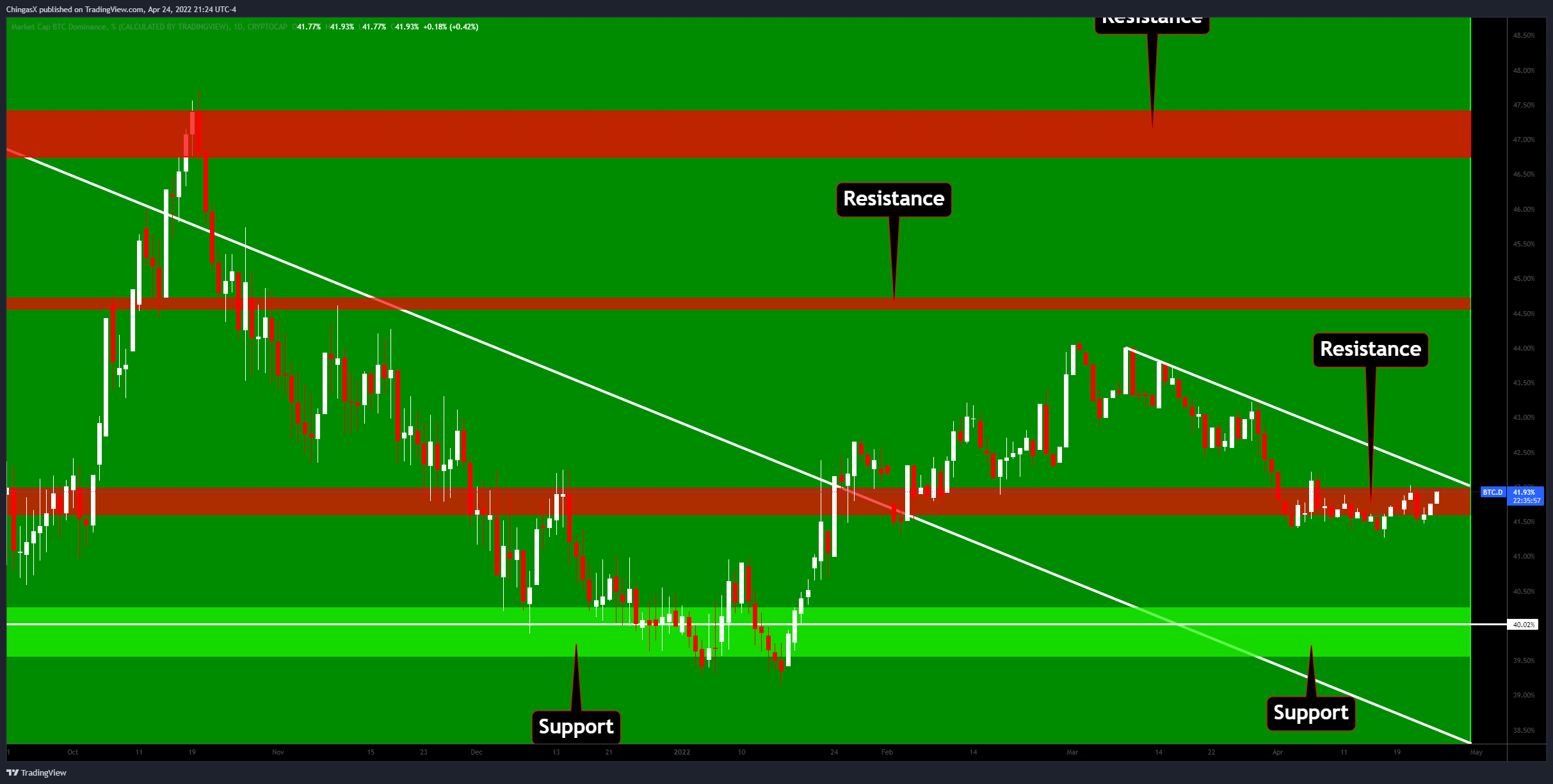 Bitcoin Dominance continues to struggle at 42%.  This has become a real challenge for Bitcoin.  We can all forget about 45% if Bitcoin can’t even reclaim the 42% zone.  What is even worse is that the Alts are bleeding as well.  This means the entire market is coming down together but the Alts are bleeding faster than Bitcoin and even some Alts are selling to buy more Bitcoin.  This can help stabilize the price a bit and even help to create sideways action. 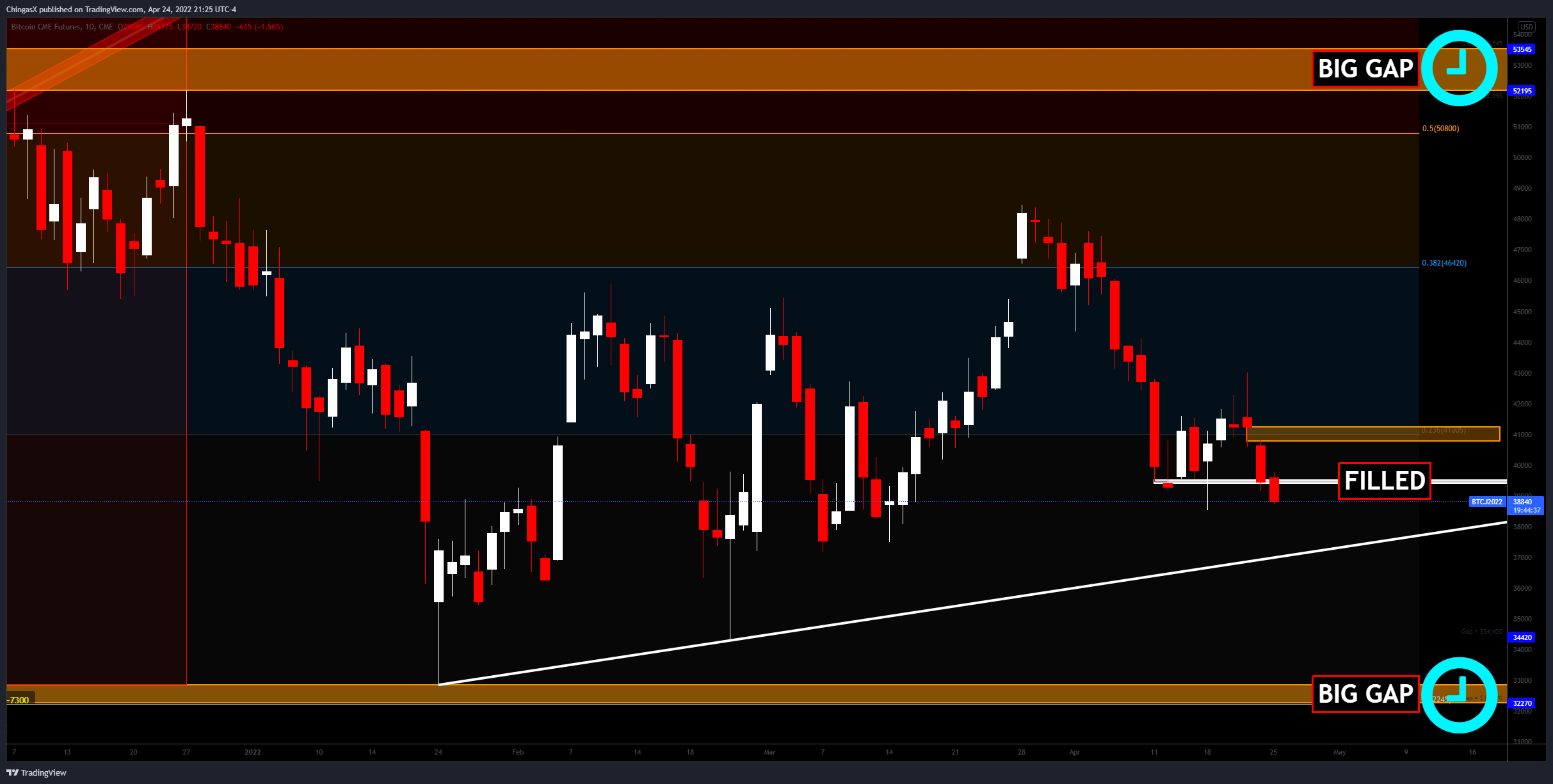 Last Friday closed the gap from April 12th but it also created a gap that not sits above price action.  This was a relatively uneventful weekend and therefore there was no nightmare gap created when we opened Futures a few hors ago.  We will need $41,245 to clear the local upper gap and then we are back to the bigger picture.  We are however, once again, closer to to Lower Gap than we are the upper gap.  As a reminder, the lower gap would need to see a price on futures down to $32,270 in order to fill the gap but we have many more gaps underneath that one. 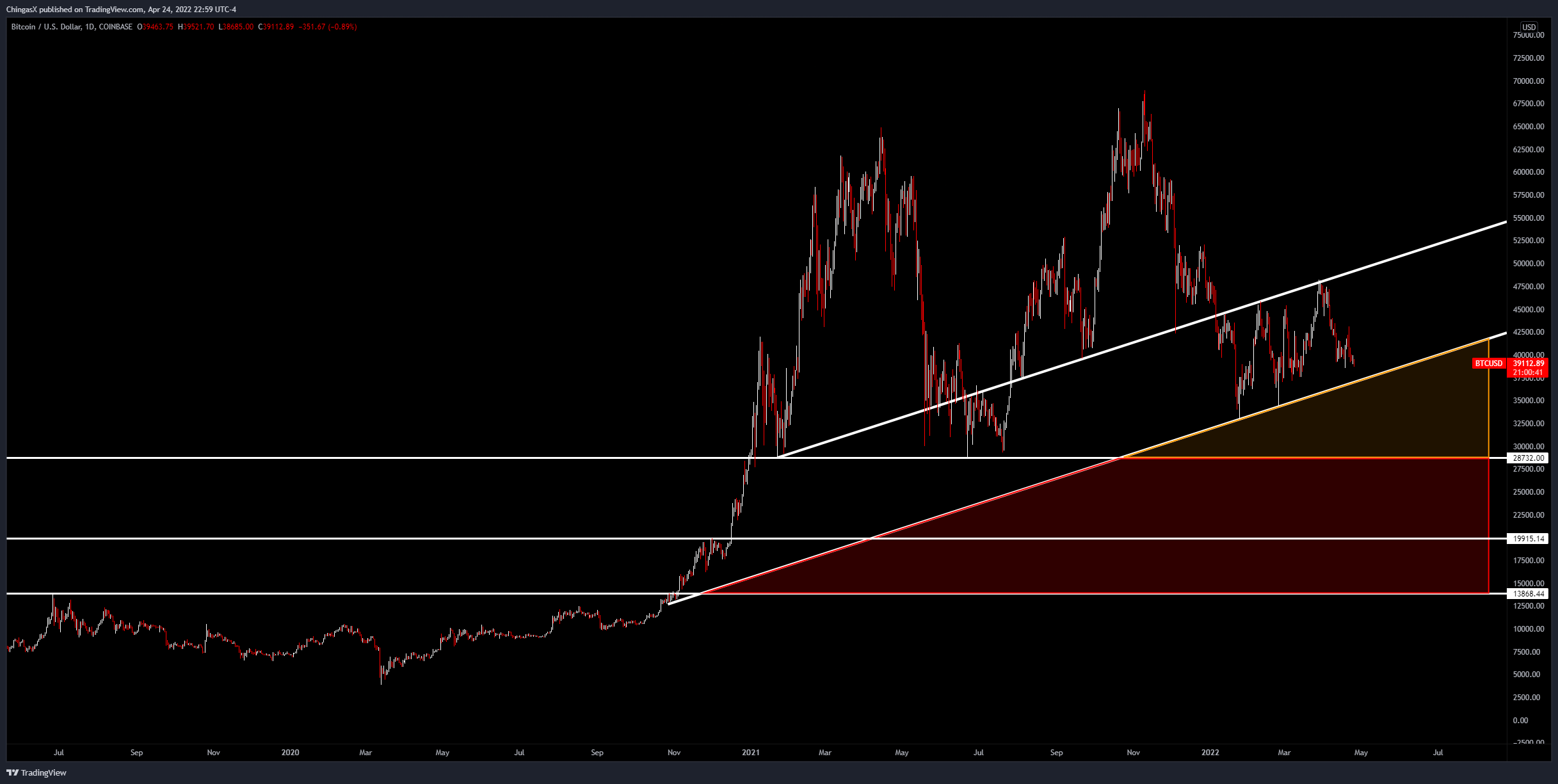 There is always a sense of frustration in downtrading markets.  Not everyone has the ability to short a market so they tend to get frustrated every time they see something going down and down and down with no way to make money.  Other traders absolutely love the smell of blood but then hop in too early, only to buy the dip for the next 98% drop all the way until they too become liquidated.  These are tough markets and that is why we always say to have a plan and to use a strategy and to make sure THAT strategy works in these environments.  An up trending market behaves much differently than a downtrending market.

All that being said, Bitcoin is approaching the bottom of a Channel that has held in the previous few months.  There is no way to guarentee that the third touch will hold but there is almost certainly a guarenteee that traders are lickeing their chops and ready to play that level if/when it is reached.  That means there is liquidity there for those looking to sell.  We could be in for a wild ride that completely destroys that level and turns this market even more Bearish but there is also a high probability that there are a lot of traders that want to trade the Channel low back to the Channel high!