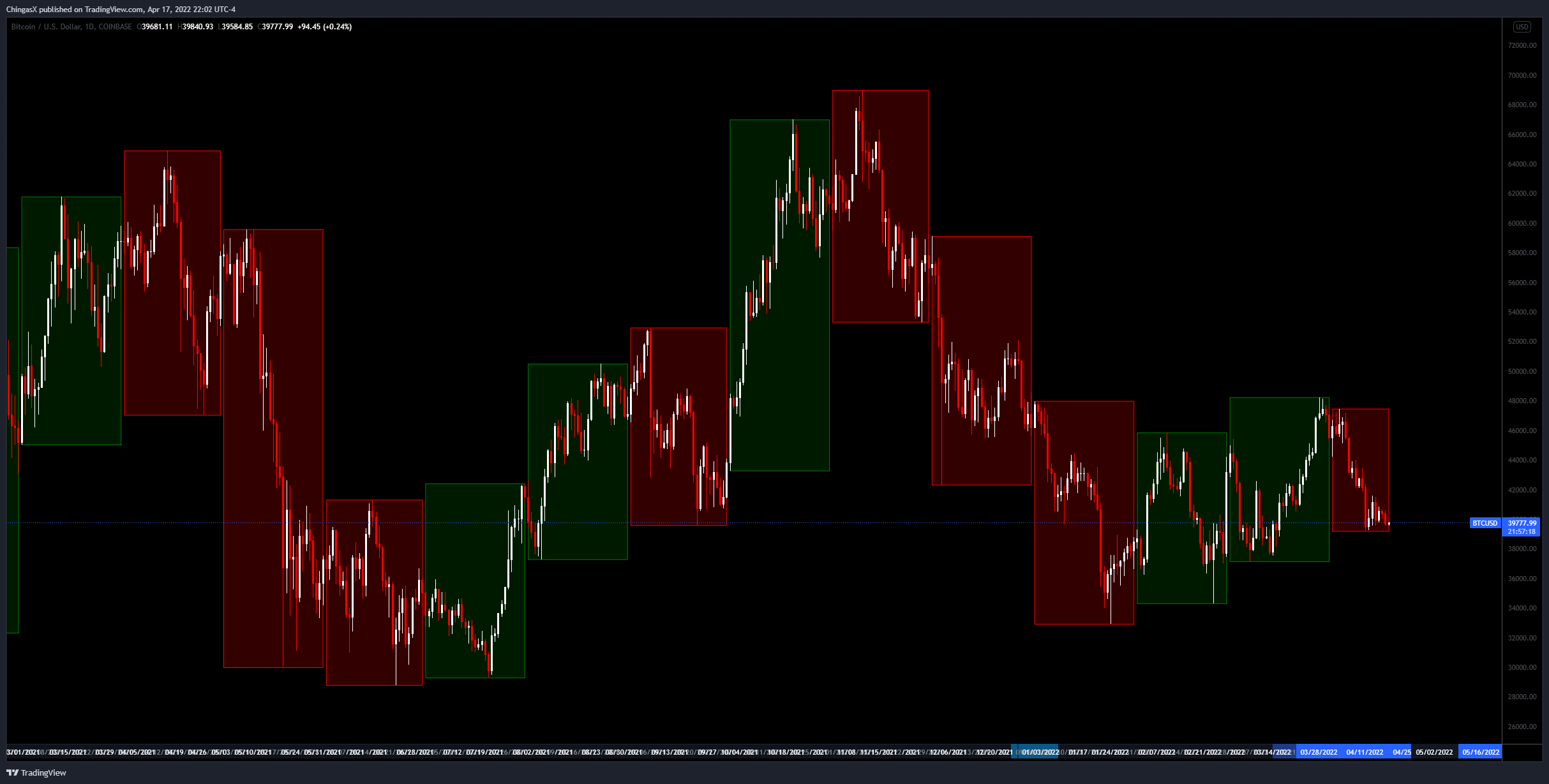 A lot of trader forget to zoom out.  They let the day to day, minute by minute price action effect their longer term outlook on the markets as well as their longer term positions.  Yes, Bitcoin has been trending down since its ATH in November of last year BUT for the last 4 months – so far – we are seeing four consecutive Higher Lows.  This long term action can very much look like a very slow trend.  Comparing this action to the action that led to the $69K ATH, we are not too far off what we have seen in the recent past.  The fact remains, until Bitcoin sweeps that low from January ($28,800) we are slowly trending up in a very macro uptrend. 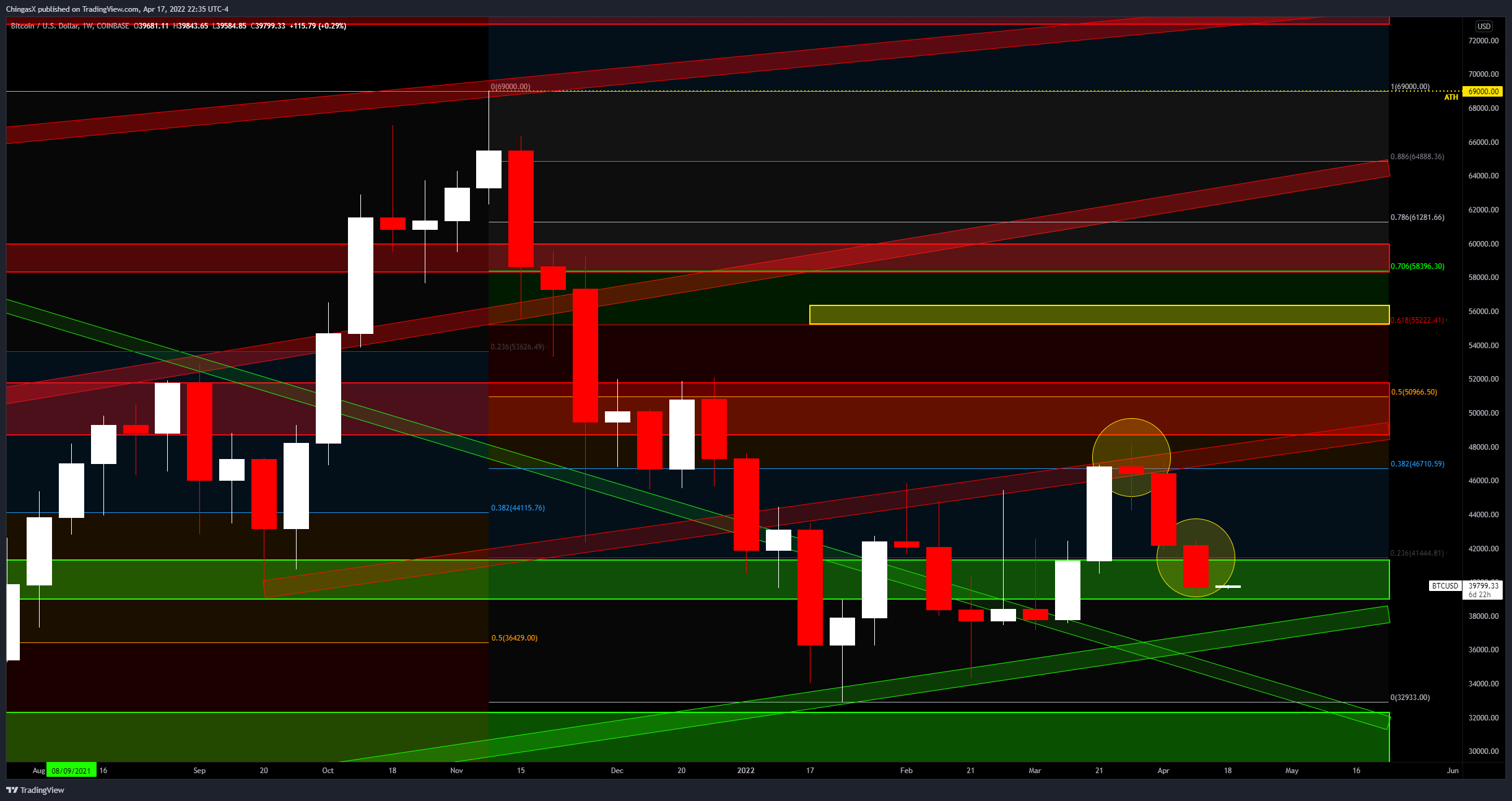 The bottom of our Support Zone sits at $39K,  Last week Bitcoins low was $39,204.  We’ll call that a win.  The Weekly shed another $2482 off Bitcoins value and when measured from the high three weeks ago, we can see Bitcoin has dropped just over $9000 which is about 19% from the recent high.

What we can also say is that teh Resistance is holding and the Support is holding.  One of these will eventually have to give.  When does that happen, well, no one knows for sure.  Being that we are still in the Support Zone for now, we tip out hats to Support holding – until it doesn’t.  If we are to follow the trend from January, then we can see as low as $37K and still be trading on the upward sloping trend. 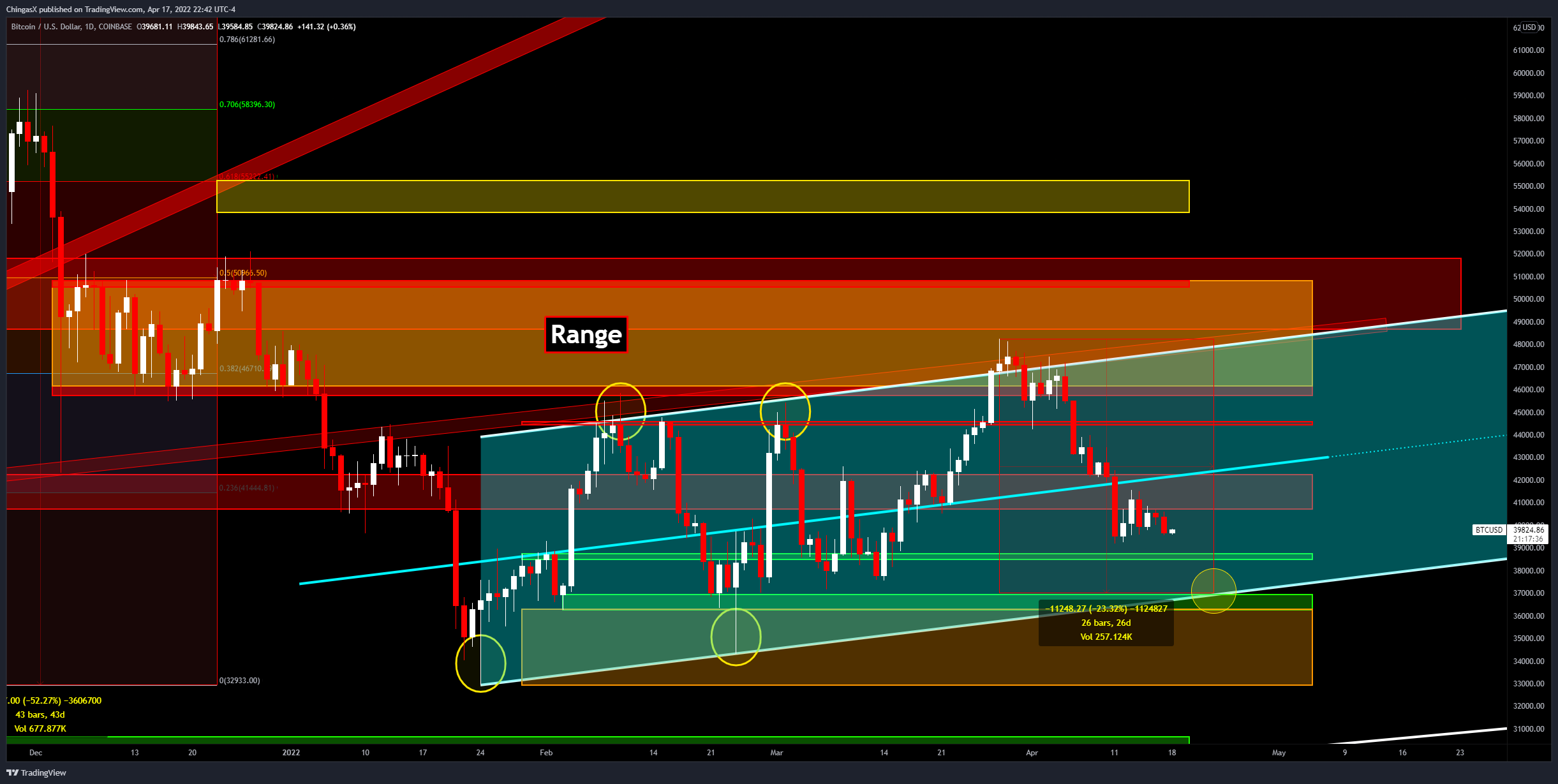 Bitcoin Daily tells the same story but in a much different way.  On the Daily we were hoping that the Median Line in the Channel would hold.  It did not.  In fact, it took a massive hit that created a 7-Day low that we have yet to breach.  This leads us to the bottom of the channel.   Of course, this is an upward sloping Channel so the level changes everyday but we are looking at something like $36,500-$37,000.  Just about the same area as the Weekly just showed us.
We are showing a very slow and potential reversal here, so every level is on eggshells and needs to not only break the level but spend some time above the level to confirm that it is for real. 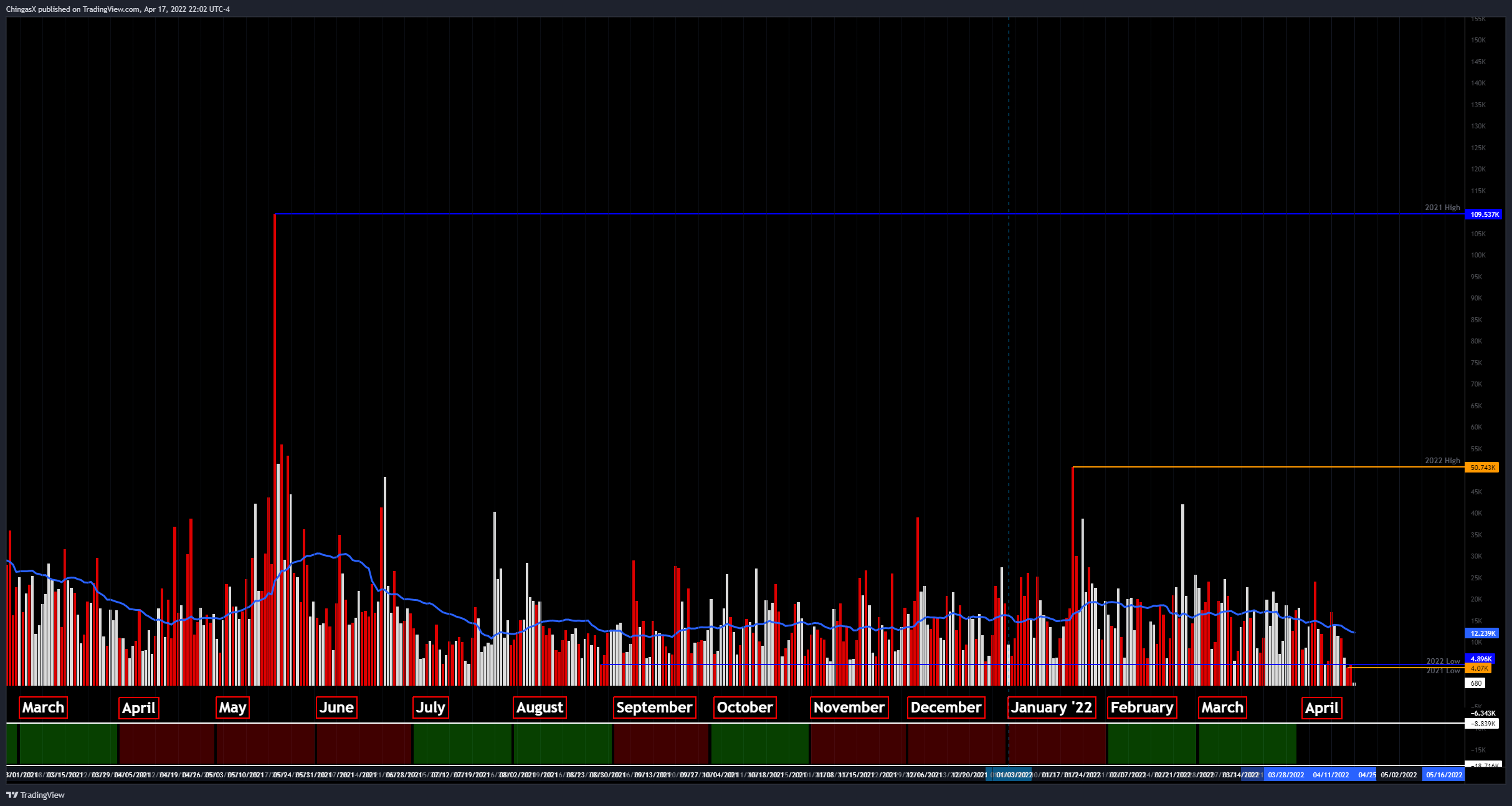 The counter argument to the slow trend upwards is the falling Volume.  Saturday was yet another 2022 ATL moment for Bitcoin Volume.  Now, if you are slowly trending up but your volume is slowly trending down, this generally means that the uptrend will not sustain as there is losing interest in trading that asset.  A reversal in interest, coupled with a few big moves in price action can help right the ship but at this moment, volume is Bearish. 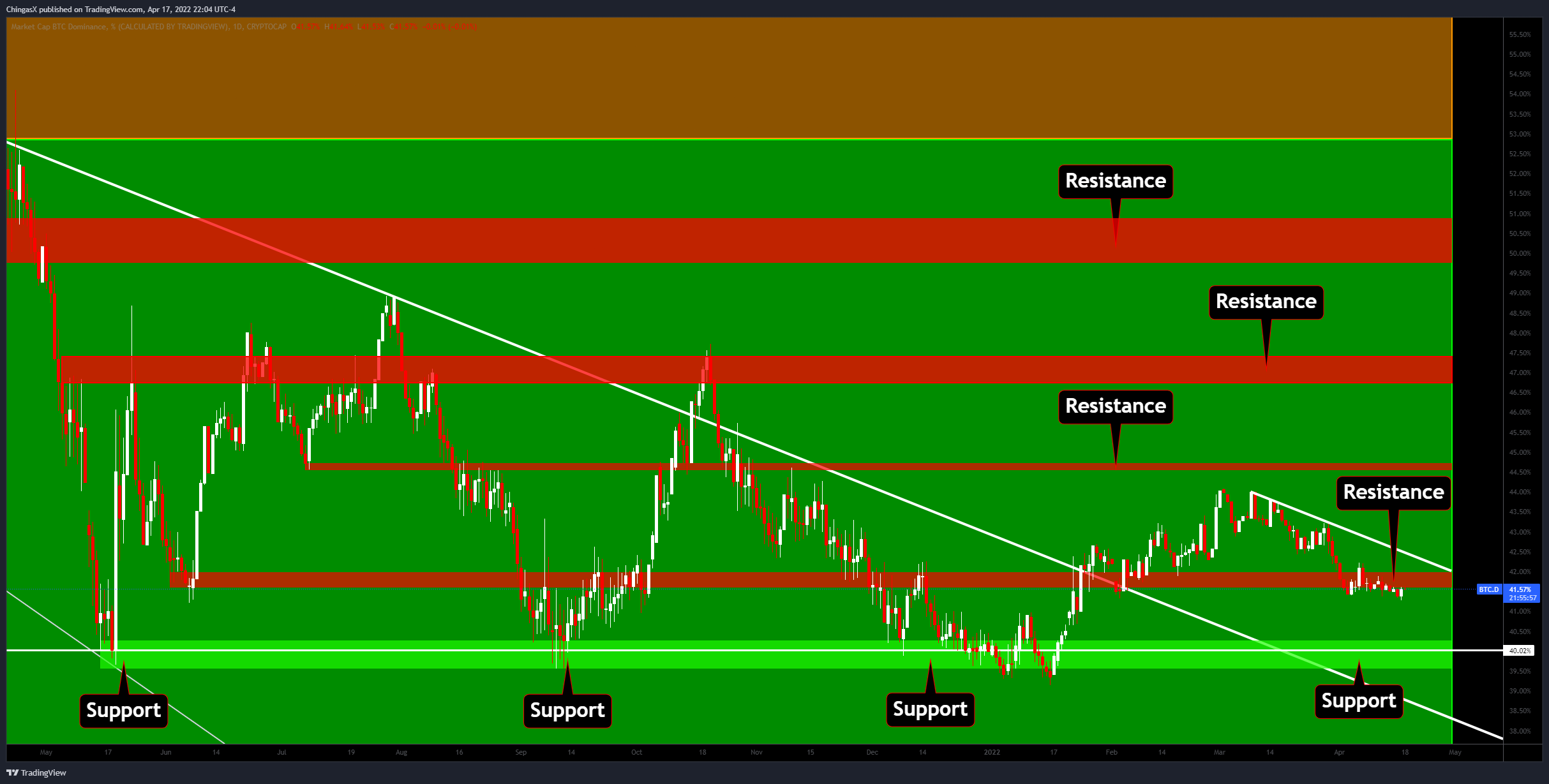 This is now Day 18 under the 42% resistance level.  Dominance at this point is considered sideways but still attempting a break out of the 42% Zone and up to the next resistance level.  There is support below that dominance has used three major times already in the recent past.  Another move down that way could be enough to break what support is left but in the last three weeks, we haven’t even seen an attempt in that area.  Currently, the market swings in tandem.  Bitcoin is bleeding and all the Alts are bleeding with it.  That essentially means that Dominance for the most part will stay he same or potentially rise. 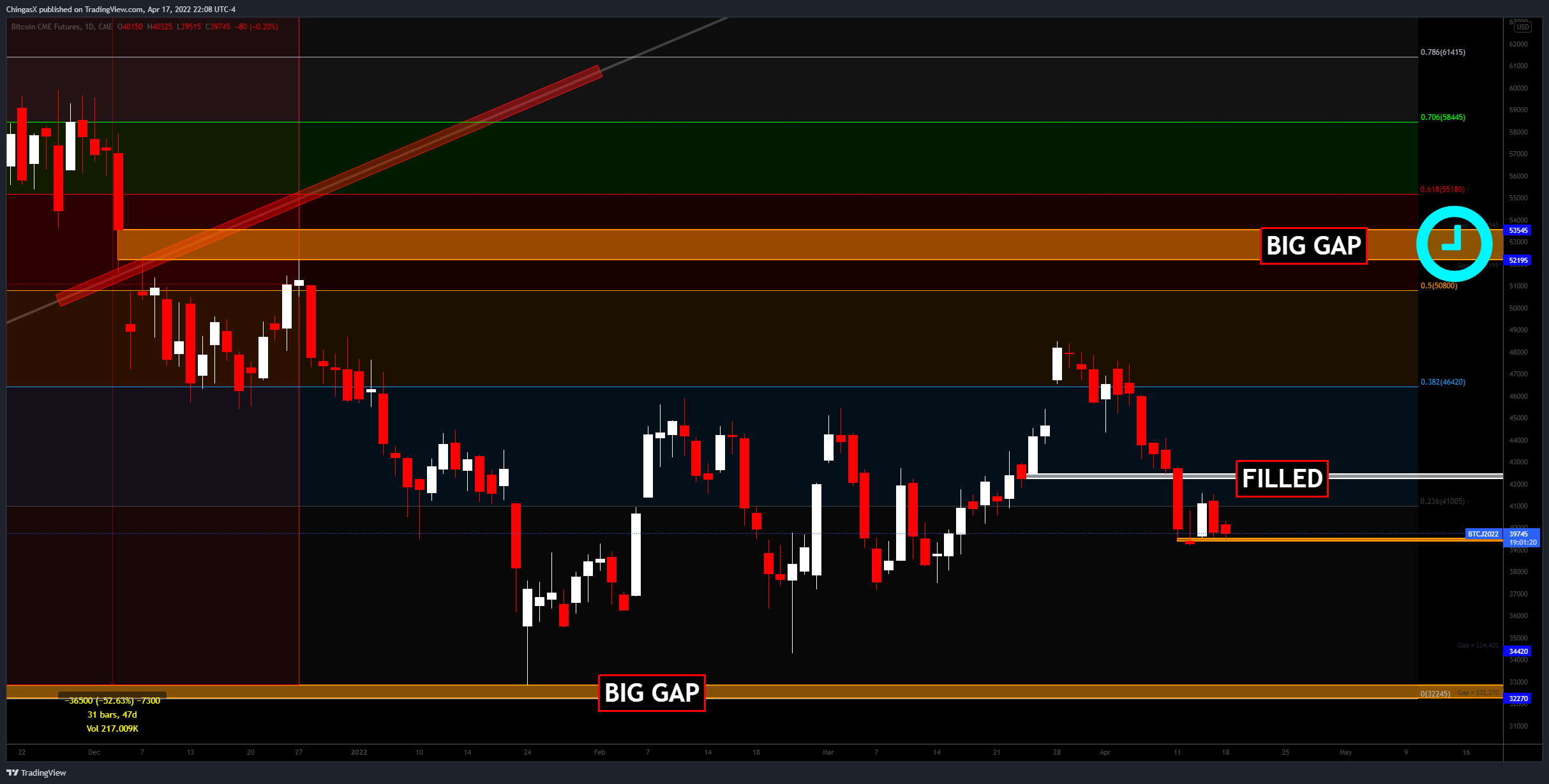 All recent Gaps have been filled except for the one created today that is also in line with a lower gap from earlier in the week.  The level to hit on Futures to clear that gap is $39,410.  We got a little piece of the action already and we are waiting for Bitcoin to rip down to that level to clear the gap.  What happens after that is anyone’s guess.  Leaving that lone gap there would not make much sense, especially after trading so close to it just an hour ago but time will tell. 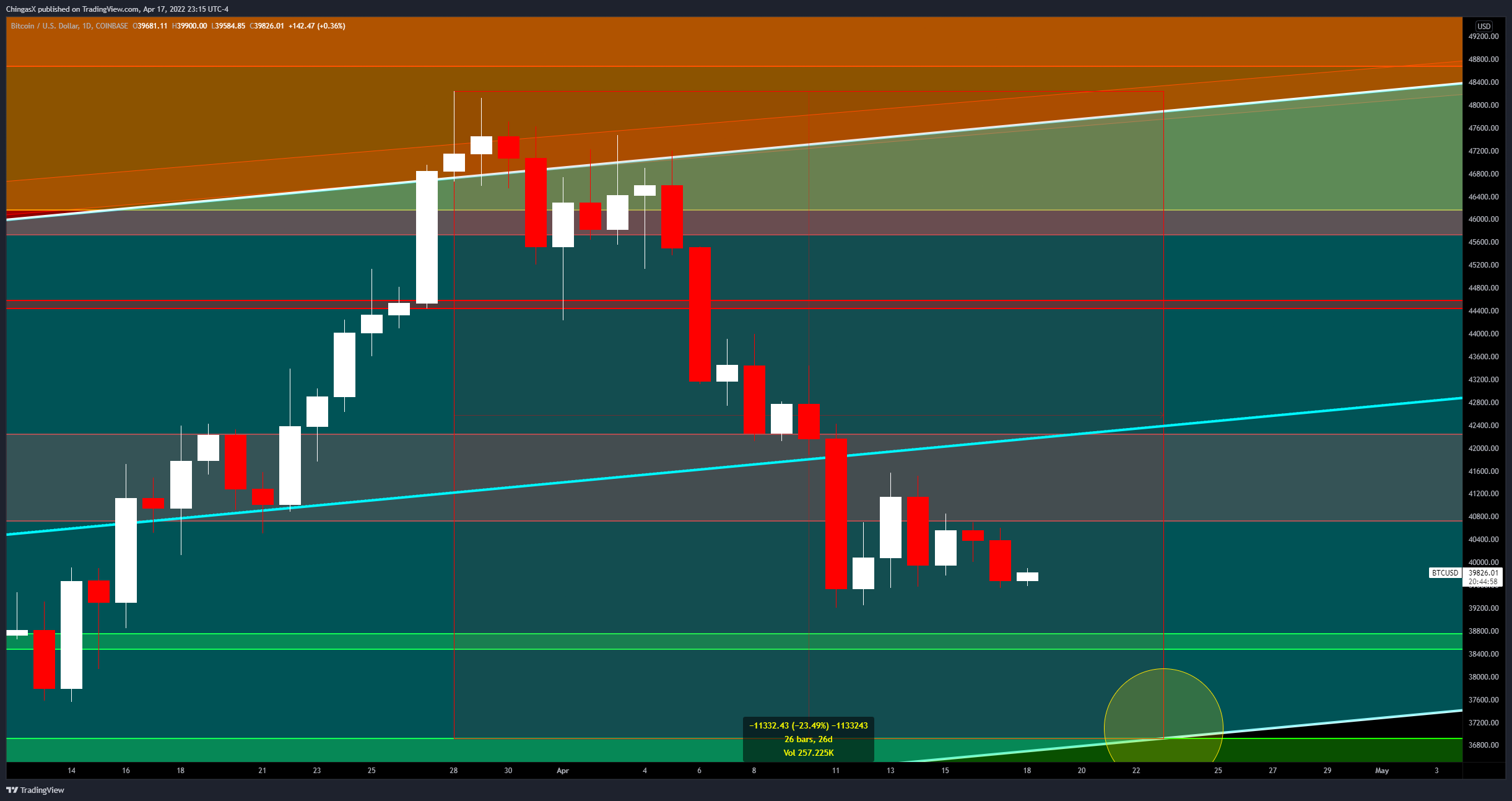 Bitcoin is between a rock and a hard place at the moment.  On one hand you want to see a reversal just for the sake of the market and on the other you want the channel to play out to provide solid support for the future.  Either way, there is no telling that we actually find support if we head down to the $36,500 – $37,000 area.  Fear has gripped this market for a few months already and many don’t want to recognize the Daily downtrend.  In some ways, this is almost insane.  As if the denial may just be strong enough to prevent a major disaster.

There is another piece of news on the table and that is Tax Day in America.  This is an interesting time indeed.  As Crypto trading becomes more mainstream and apps like Webull and Robinhood open the door to retail traders to try their hand at Crypto trading, the repercussions of needing to make withdrawals in order to pay the tax man can be very real.  Some analysts would say this is priced in but there is something very different this year that we never really had years before…DeFi.

DeFi gives traders the opportunity to make yeild on their stables.  In other words, why on earth would you put your money in the bank for 0.01% interest when you can make, in some cases, 80% APR in DeFi.  This means that traders now have the ability to keep their money in DeFi until the very last minute to pay the tax man, as pulling that money out earlier and putting it in a bank is actually losing you money.

It remains to be seen if we see some bullish action after tomorrow has come and gone.  I know many are hoping that the end of the downward action is near.