We have yet another week under our belts as we enter the second week of the second quarter of 2022.  Wow how time flies!  This week we can can see the correction has reached the “Deeper Pullback” that we described that week.  All T-10 coins took a hit over the last week and most of them are sitting in double-digit losses.  Global Market Cap remains above $2 Trillion which is still very much a good sign. 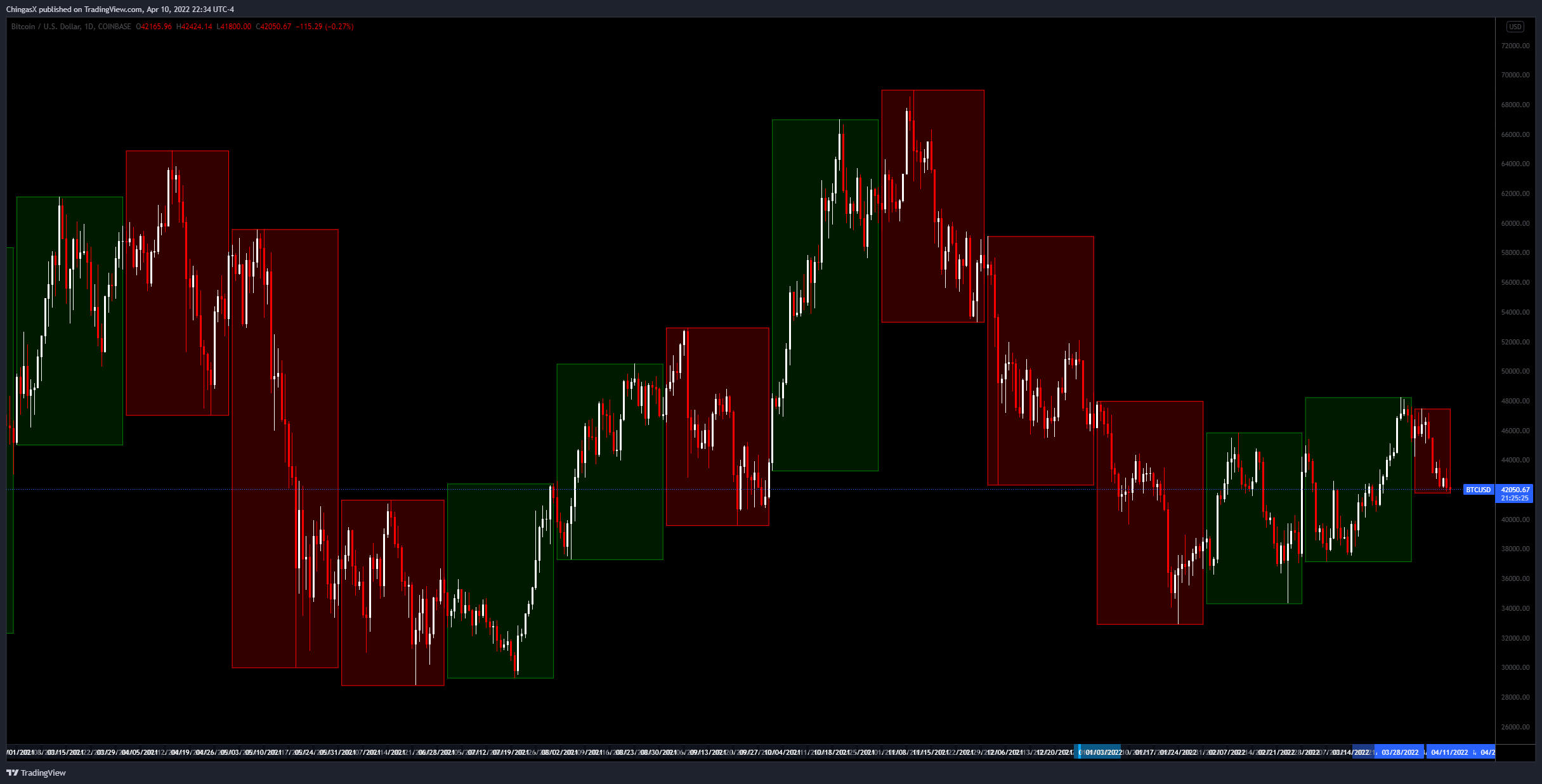 Bitcoin Monthly is still par for the course.  Currently we are 4 consecutive months of Higher Lows and we are putting in action that is very similar to the action the lead up to the new ATH run that went to $69K.  As far as the very long-term picture is concerned, the low from 4 months ago is still very much in place.  When you zoom out, you can see how the pullback over the last two weeks is barely a blip on the map. 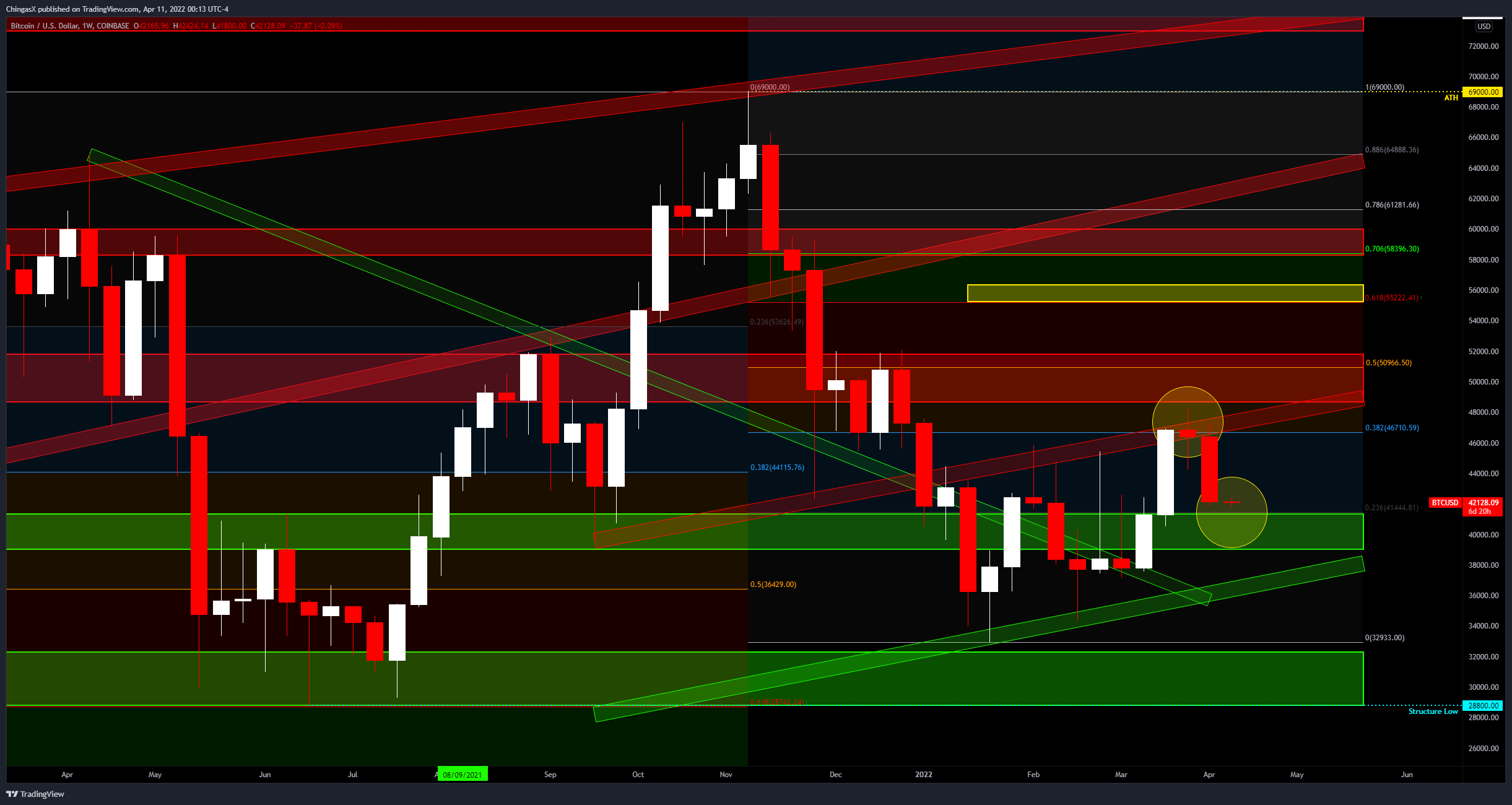 As crazy as this might sound, the Weekly chart looks good.  The reason we can say that is because of the Support Zone around $41-42K.  Bitcoin spent 12 Weeks around that area and most of the time is was used as resistance.  It would not be uncommon for Bitcoin to have a massive breakout, which it did, and then come back to retest the zone as support.  That would be nothing more than a traditional breakout – retest but this time on the Weekly resolution.  The overhead resistance has proven to hold and therefore we can put more emphasis on that level moving forward.  As of now, we can still dip lower to get a better retest into that zone but with the gap filled on the futures chart, it may not be necessary. 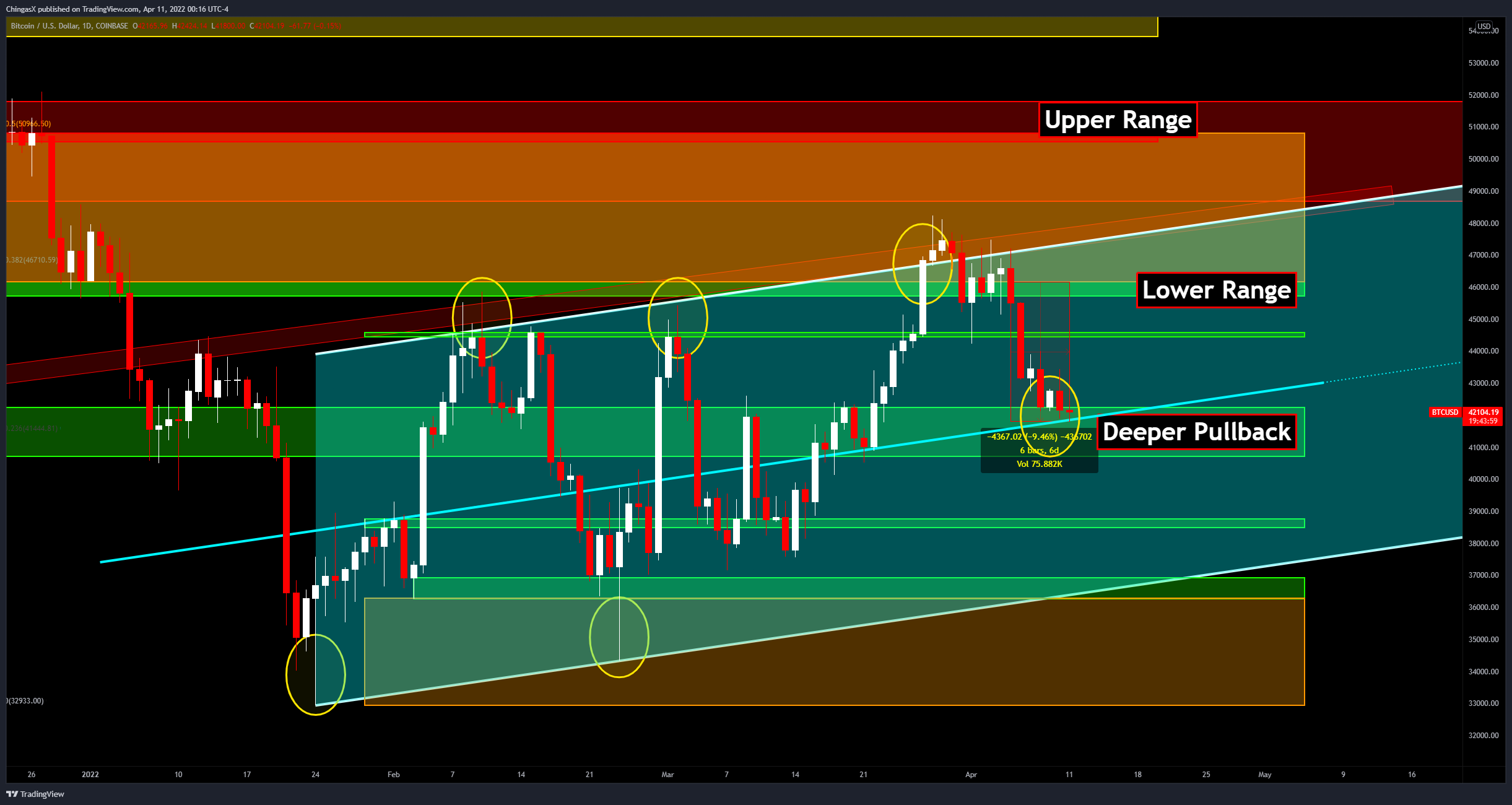 The drop from $48K to $42K was also another move that many traders are watching on the Daily chart.  The move down was resistance at the top side of a rising channel and the current area of support just so happens to be the median of the channel.  This is now Day 2 using the median line as support.

This is a bit more interesting when you couple things like horizontal Support, local 23.6 fibs, the deeper pullback from the high-side rejection and the fact that the median line has acted as both Support and Resistance in the past.  There is an opportunity here for a rally, it just takes one big candle to get the party started. 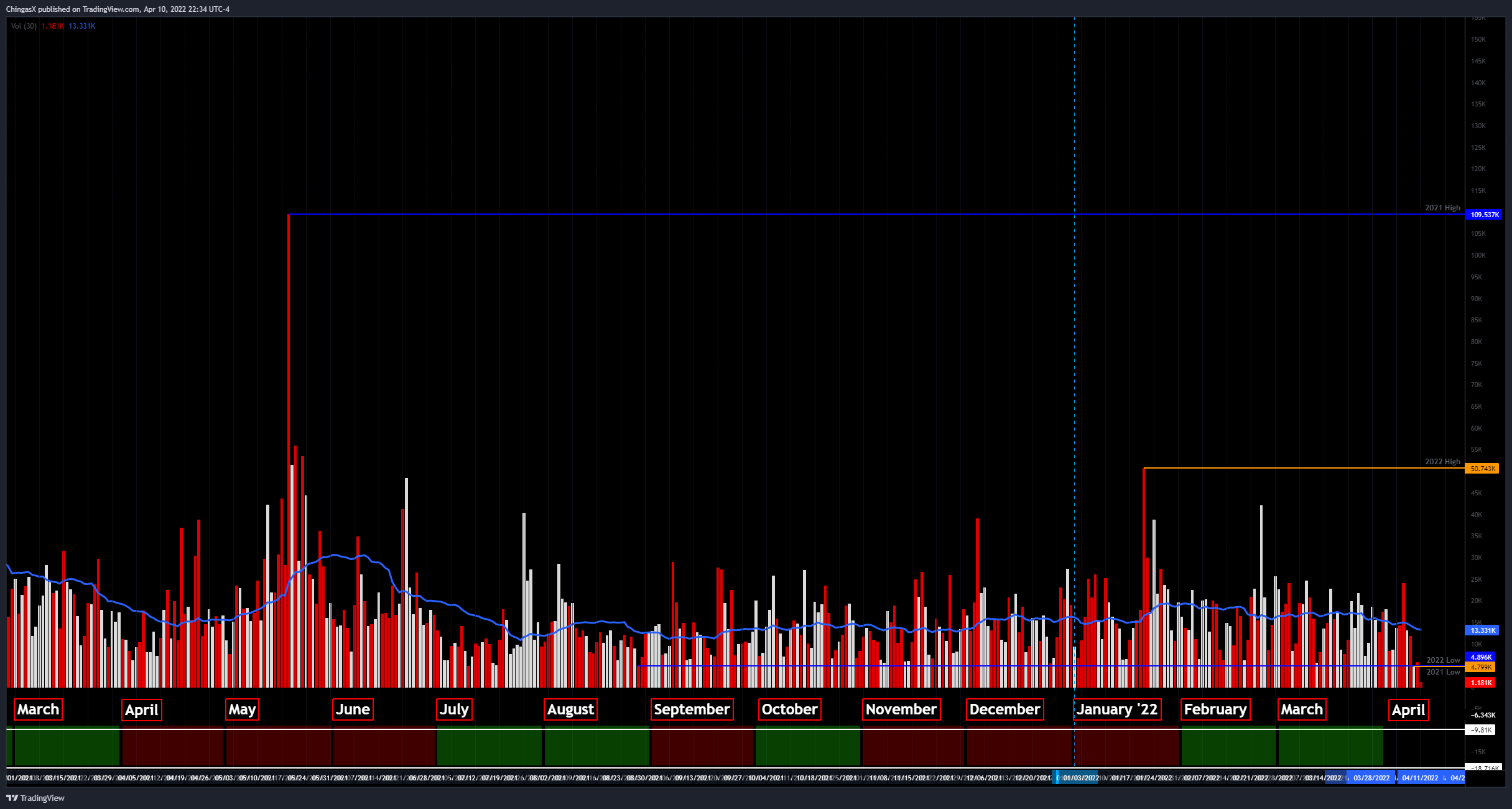 Well, we put in our lowest Volume node of the year on Saturday.  March 12th was the low we just broke.  Weekend Volume always has the best chance of being the lowest volume with the highest chance of volatility.  Volume has been trending down now over the last month of trading and in a way that is good.  Wellers could potentially be getting exhausted over the last few weeks but it also means that the volume on the potential reversal was more suspicious than it originally lead on to be. 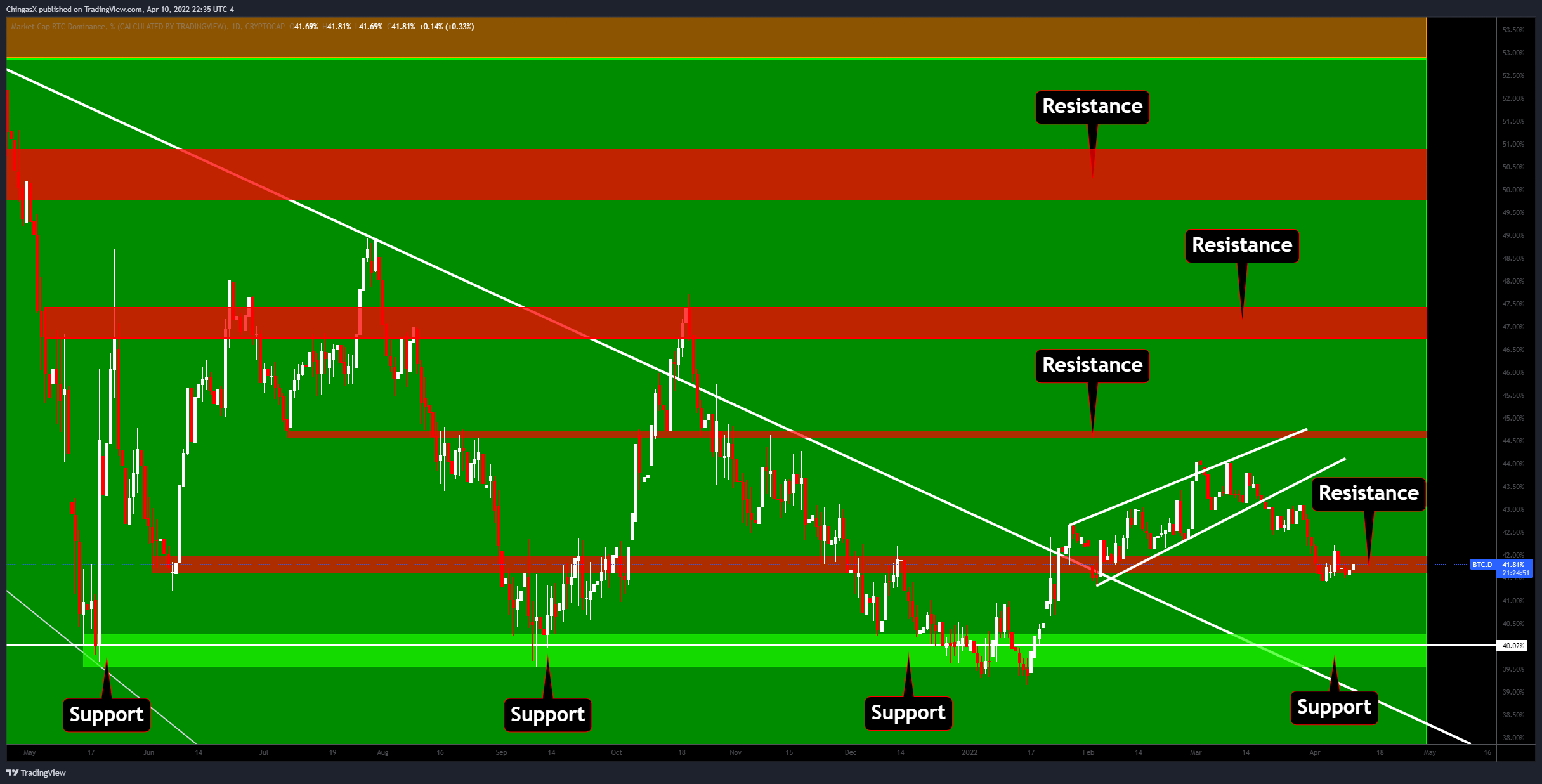 Bitcoin Dominance is struggling to regain the support level it created in early February.  Dominance had a really good run while trying to achieve the 44-45% Zone but once it hit that very local double top, it has since died.  For a bit, support was found but its acting more and more like resistance day to day.  This is why it’s red at the moment instead of green.  We wait to see whether this area can turn Dominance around for another run at 45% or if it dies further from here and heads all the way back down to it’s last major support. 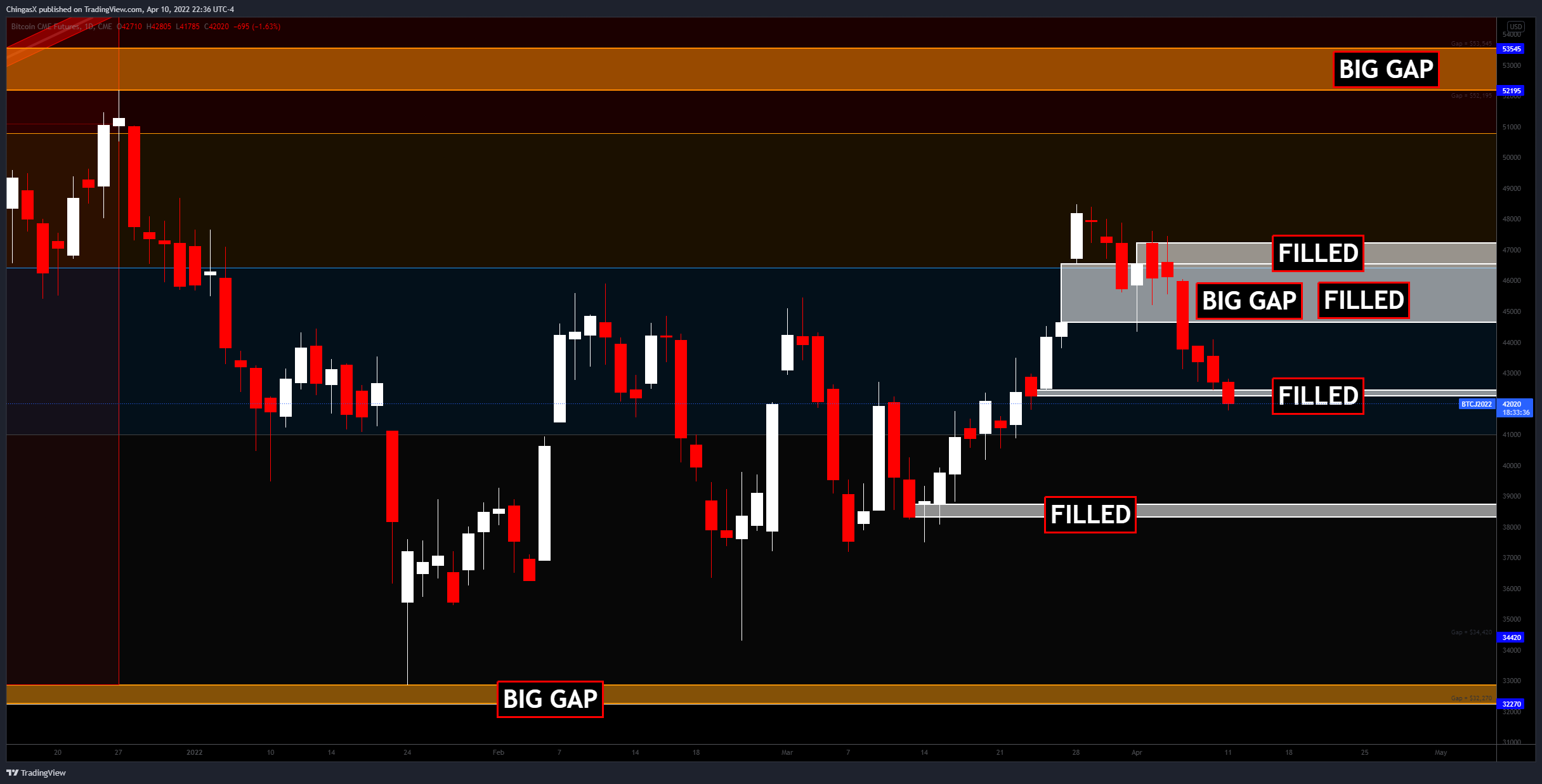 CME Futures had a lone gap down at $42,250.  After the big rally up to $48K, most assumed we’d never see $42K again.  We did and it was almost a straight shot right down to the level.  For awhile, Bitcoin sat directly on this level before getting another mini push downward.  $41,785 is the low so far for today.  Low Timeframe analysis is showing a steady climb to try to reclaim levels.  We will see if this was the low that was needed so the market can move up in peace.  The next low-side gap is at $32,270 and the next high-side gap is sitting at $53,545. 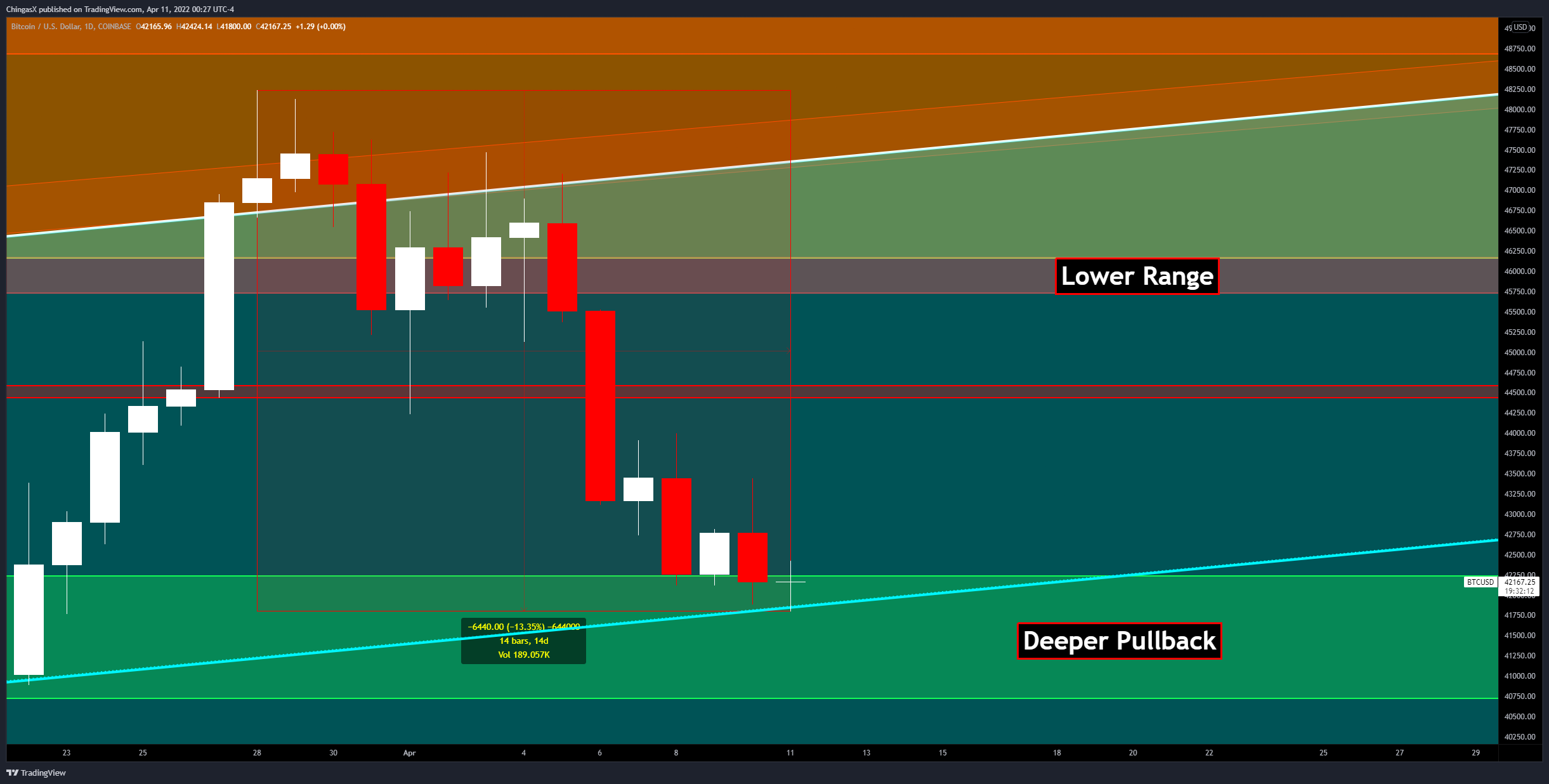 The pullback we are looking at is only a 13% pullback and that is really shallow in comparison to pullbacks in the past.  I think a case can be made for the Bulls to step in on the median and pump Bitcoin over the next several weeks.  Another case can be made that once we break these levels, we head to the bottom of the channel and after that, things get really, really messy.

Every week seems to be make or break for Bitcoin but that’s mostly the internet trying to get you to provide liquidity for themselves.  Keep calm and continue to focus on the charts and see what comes from rallies, trends, pullbacks and breakouts.