Not too long ago this top 5 was VERY RED and included XRP.  The fight for 4th and 5th continues with SOL and LUNA beating out the competition respectfully.  BTC, ETH and BNB comfortably hold their positions as they have for quite some time now.  We can see Global Market Cap is also a healthy $2.22 Trillion.  Not too shabby at all.  Interestingly enough, BTC is the only one of the five that is not trending strong on the PAS in any timeframe. 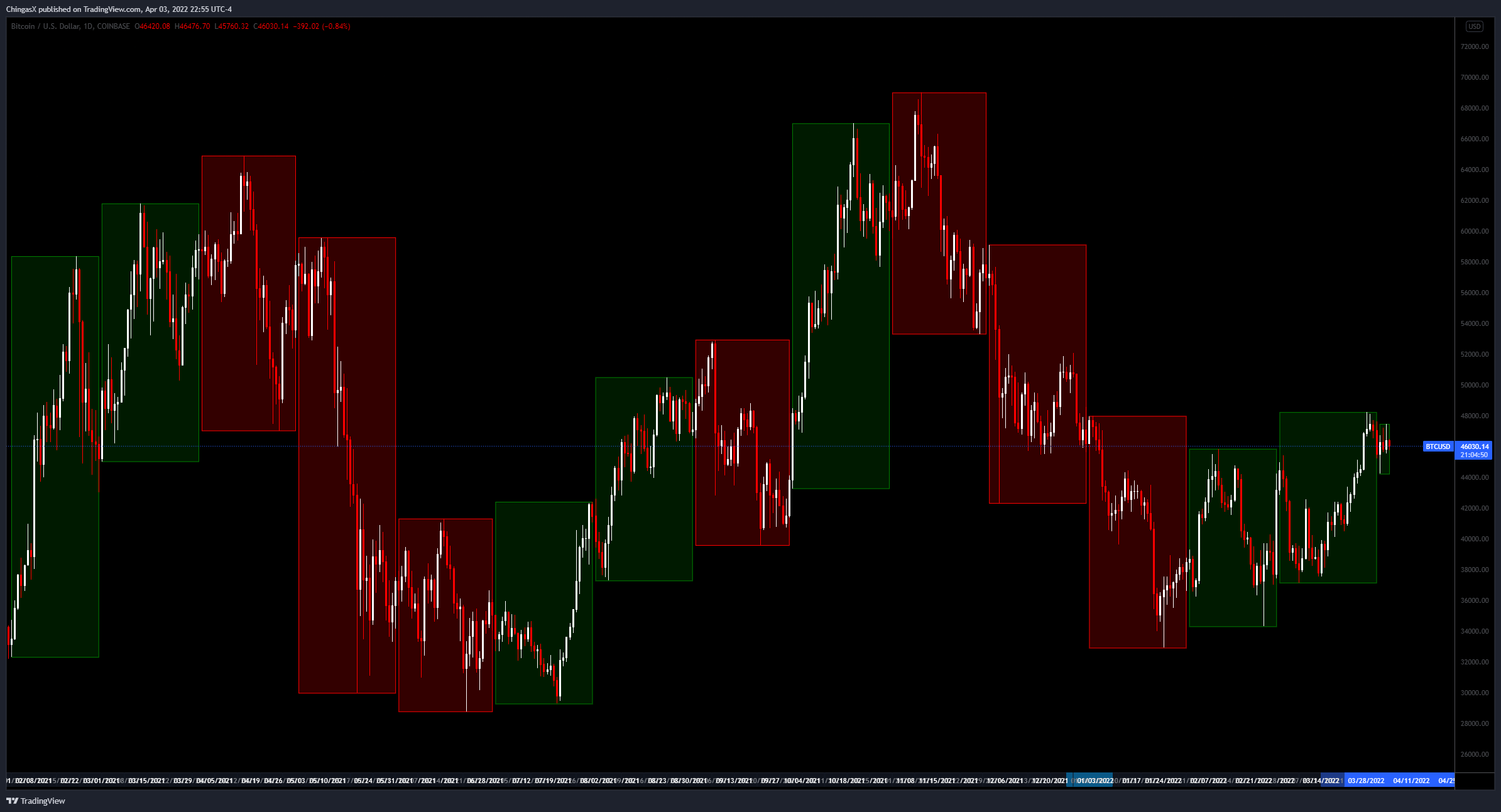 Bitcoin Monthly did exactly what it needed to do.  It needed to clear last months high and it did just that.  The similarities here are uncanny.  If we followed a similar pattern to last summer then we could be looking at a run this month in April, a deep pullback in May and then another run in June.  Of course, nobody actually trades like that.  We just look for clues in the bigger picture and the bigger picture took care of business. 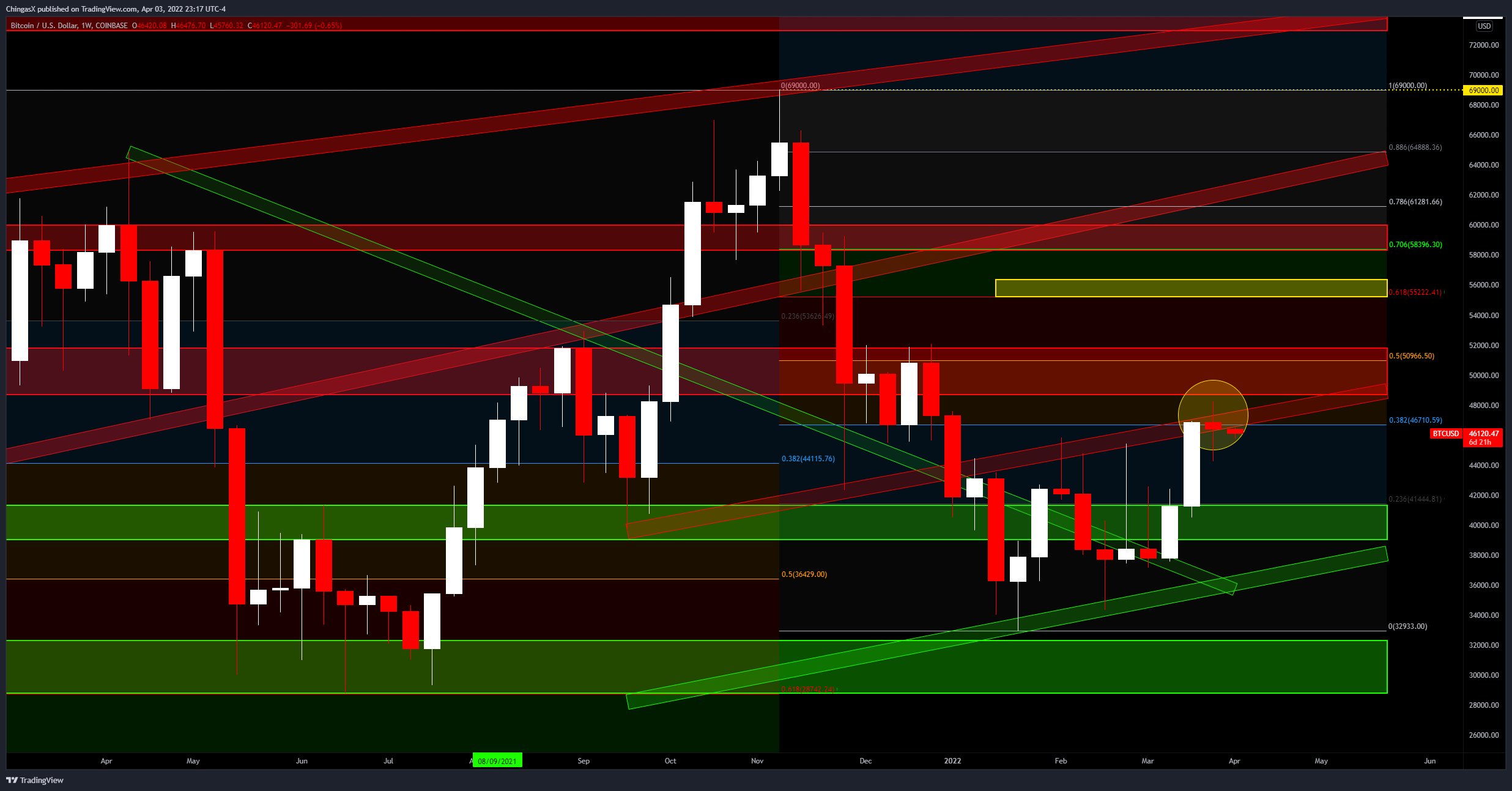 Last weeks triple rejection was strong enough to keep the Bulls at bay and give the overwhelmed Bears a chance to recover.  The internal upward sloping trend, in conjunction with massive overhead resistance and the local 38.2 Fibonacci were enough to stop the Bulls dead in there tracks.  The entire weekly candle had an Open to Close of $427.  Not bad when you consider the Bulls just finished putting in a $5500 candle the week before.  As of right now – resistance is holding.  The next major support starts at $41,444 and there is a small gap to fill in that zone.  Next northern target looks to be $51K with a wick up to $52K.

Daily Price Action has been pretty wild.  We broke through the channel and were able to spend three days above the resistance level but in the end, it just wasn’t enough.  Bitcoin re-entered the channel and retested the same area of support that launched the $2300 Daily Candle.  We can all that a retest and we did see some good buying in that area from $44,450 all the way up to $46,450.

The story now is what comes next?  Does Bitcoin consider this retest good enough for a continuation of the very local trend?  Do we consider the break of the two most recent highs an open ticket to reverse the downward trend from November? 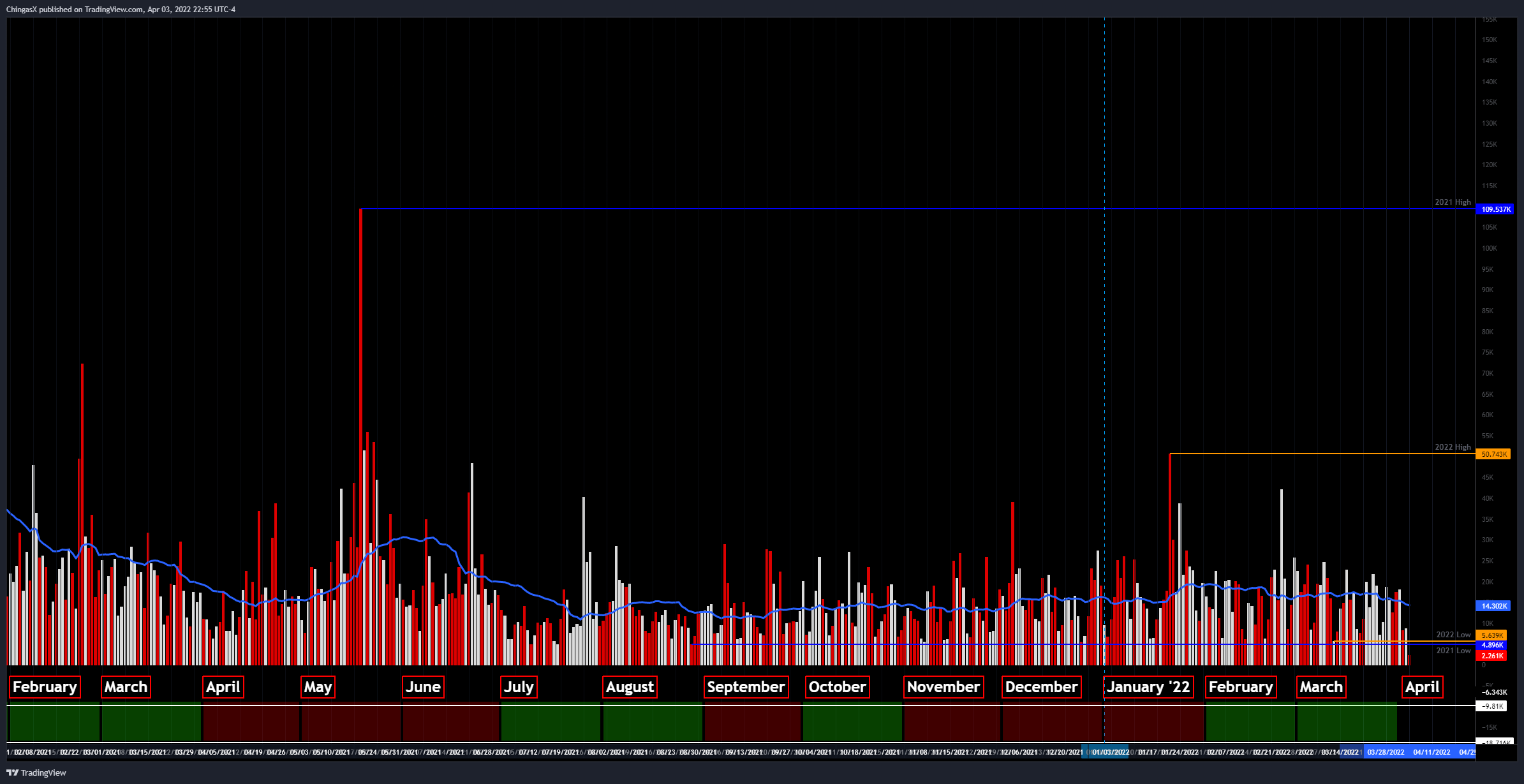 Volume is still not impressive.  All the peak volume days in March trended downward.  Less and less volume over the month.  There was a similar story last March as well.  We wait to see if volume will pick up at all and potentially start turning our moving average to the up side. 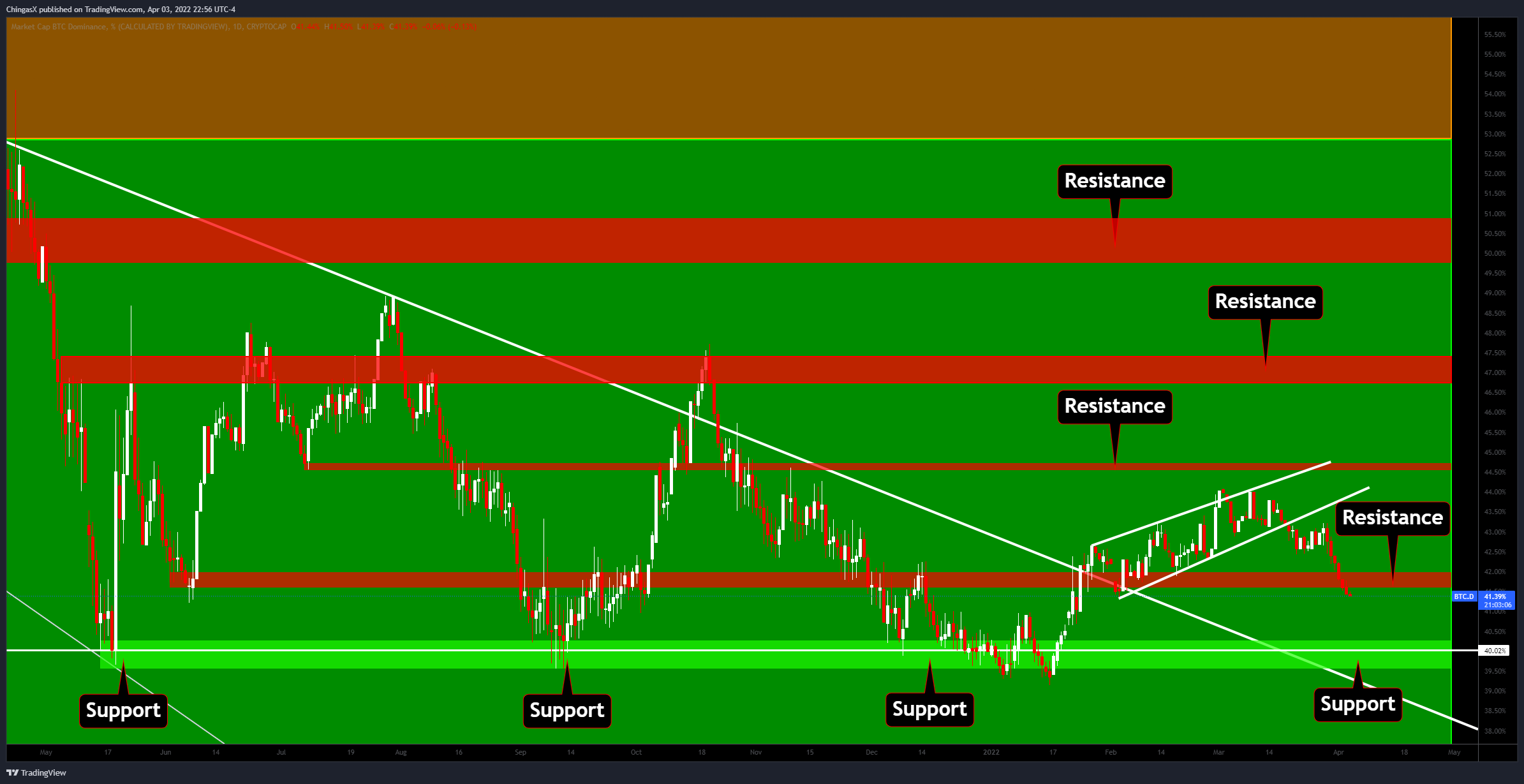 Something we have talked about in State of the Alts – the Dominance of Bitcoin is falling.  I know, how can this be?  Well, 59% of all crypto Market Cap is made from Alts.  Those alts over the last few weeks have been starting to make some pretty serious moves.  Meanwhile, Bitcoin on the weekly has almost not moved at all from Open to Close.  In fact, it was a less than 1% loss over the week.

This means that when Bitcoin is going sideways, the Alts are getting ready to party – that means the Alts will start chipping away at Bitcoins Dominance. 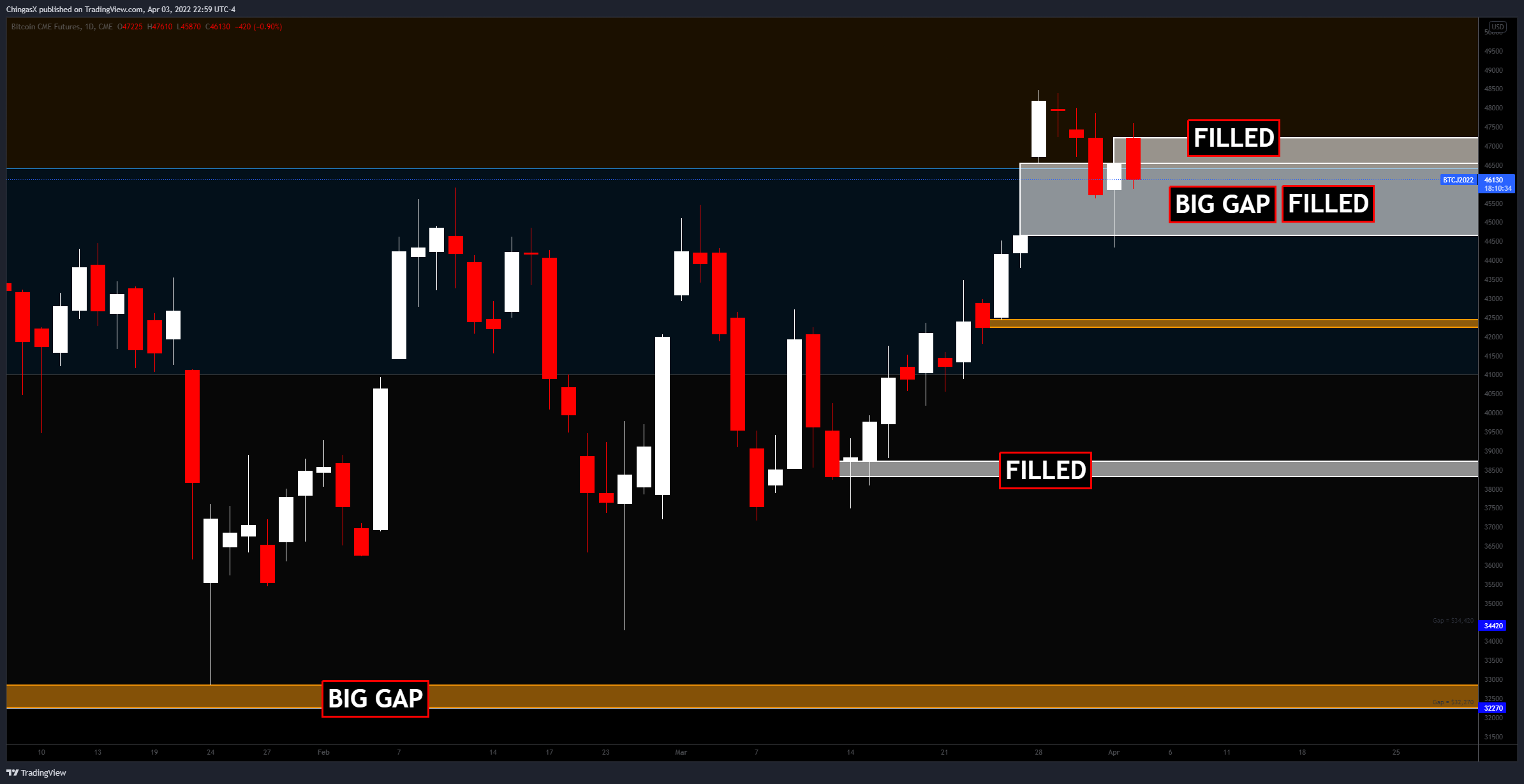 When you are trading at $48K, the last thing you want to hear is someone say “expect to see $44,600” but that is unfortunately what we talked about last week.  The very large gap that was left over from last week was filed – in it’s entirety.  The Gap was created from a Friday to Monday shift in CMEs and the Gap was closed the following Friday.  Once again, earlier today we opened above the Friday close and this time we filled the Gap from the weekend straight away.  We still have a relatively small gap near $42K and we have an upper gap near $52K.  This is the pullback we needed, so the Bulls have no excuse not to continue up.

The trend itself is looking weak and it’s looking as though it wants to pullback to $42K.  Mind you, it does not have to.  The last five days have traded within the very bottom of the range from long ago.  This is somewhat promising as if Bitcoin can just trade sideways then that really opens the door for Alt coins to go for some big runs and it would take all the pressure off of Bitcoin to need to do anything to Run the Show.

This would be preferred for a month or two.  That being said – super short term is looking more like a pullback to $42K or a hold of the lower range and a blast to the top of the original range.  Top of the range is around $51K and that price action would likely be enough to help the Alts continue to push in some favorable directions.