Low TimeFrame reversals for Bitcoin, Ethereum and BNB are pretty special.  Another week has gone by and another week of price action has not disappointed traders all over the world.  Let us not forget we have been trending down on Bitcoin since the ATH in November.  At first, just a pullback but then a full on trend since then. 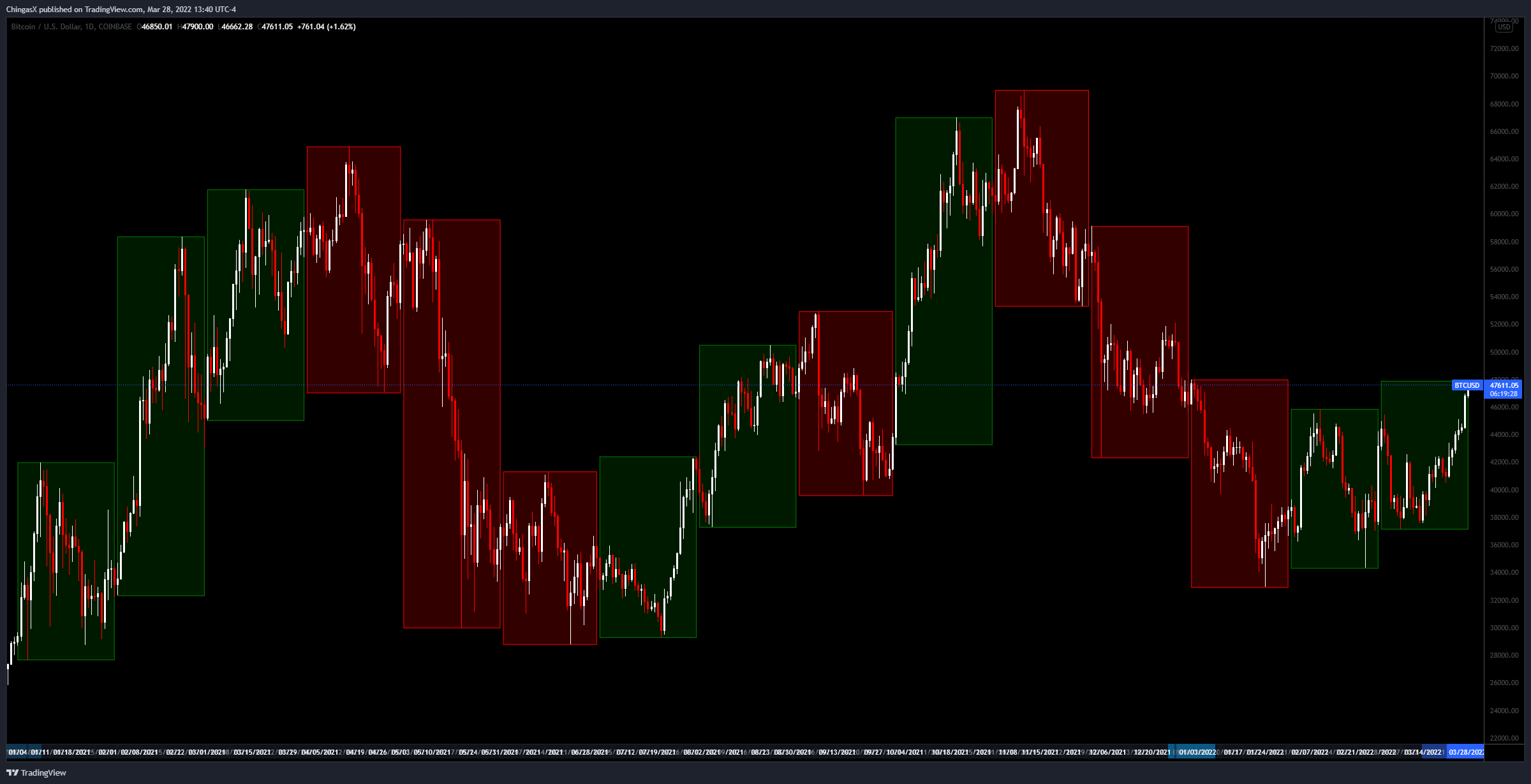 Believe it or not, Long-Term is showing us exactly what we need to see.  We wanted to see a break and close above last months High and we are in that area as we speak.  On the Monthly – a breach of the High is not the same as a close above the high – so we do still have a few days to nurture the price action but what we see at the moment is very good for the Long-Term picture. 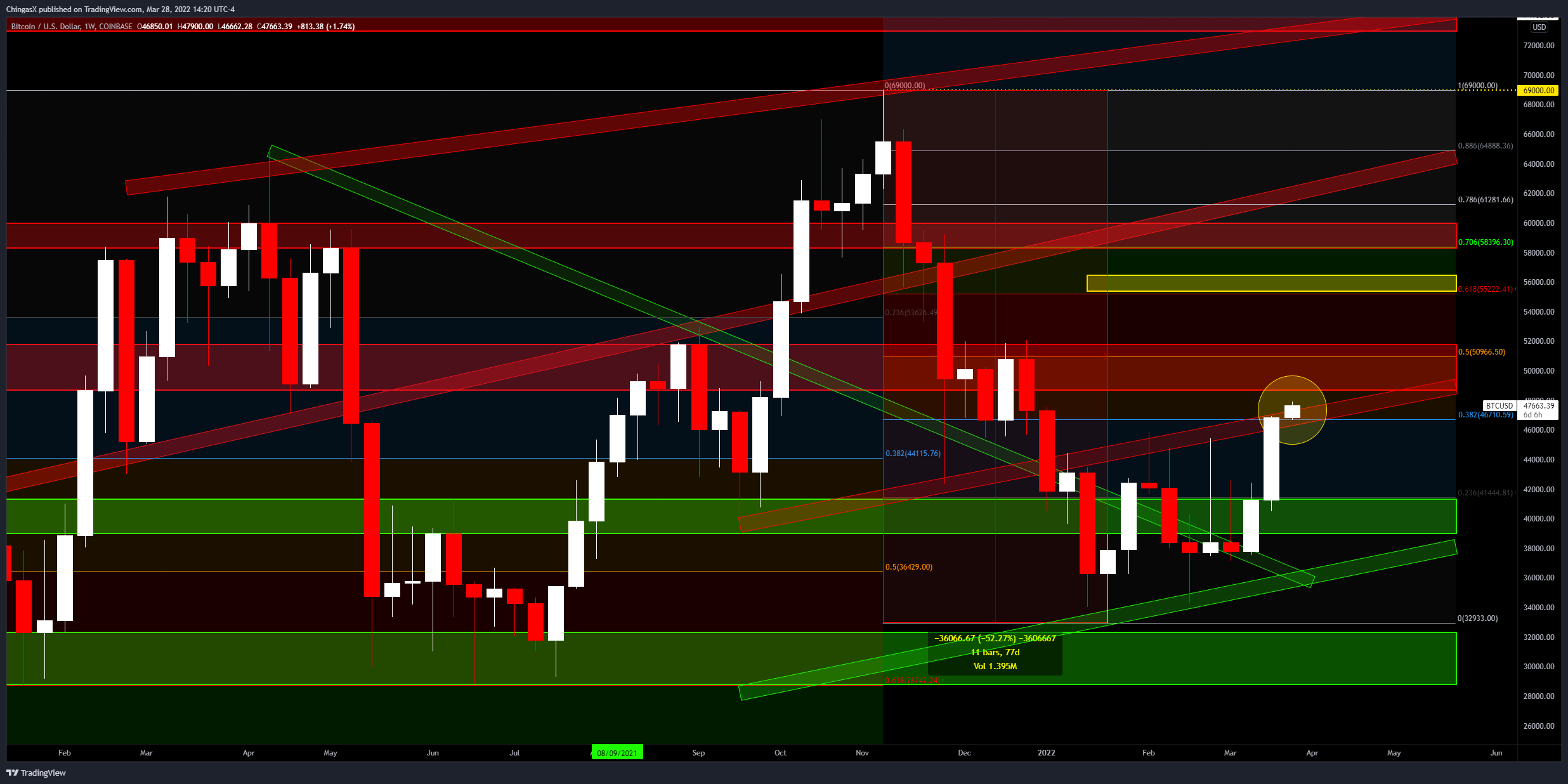 We can finally flip our $39,015 – $41,322 Zone from Resistance to Support.  We spent 12 weeks interacting with that Zone and a large portion of that was acting as Resistance as opposed to Support.  We are currently crossing another very Key area.  Our Fibonacci 382 sits at $46,710.  In the same exact area, we have an internal trendline of upward sloping resistance.  Last week we closed in the red and we are dancing all over these levels so far today.  A weekly candle close above this area would help to continue the push to the initial target of the 618 at $55,222. 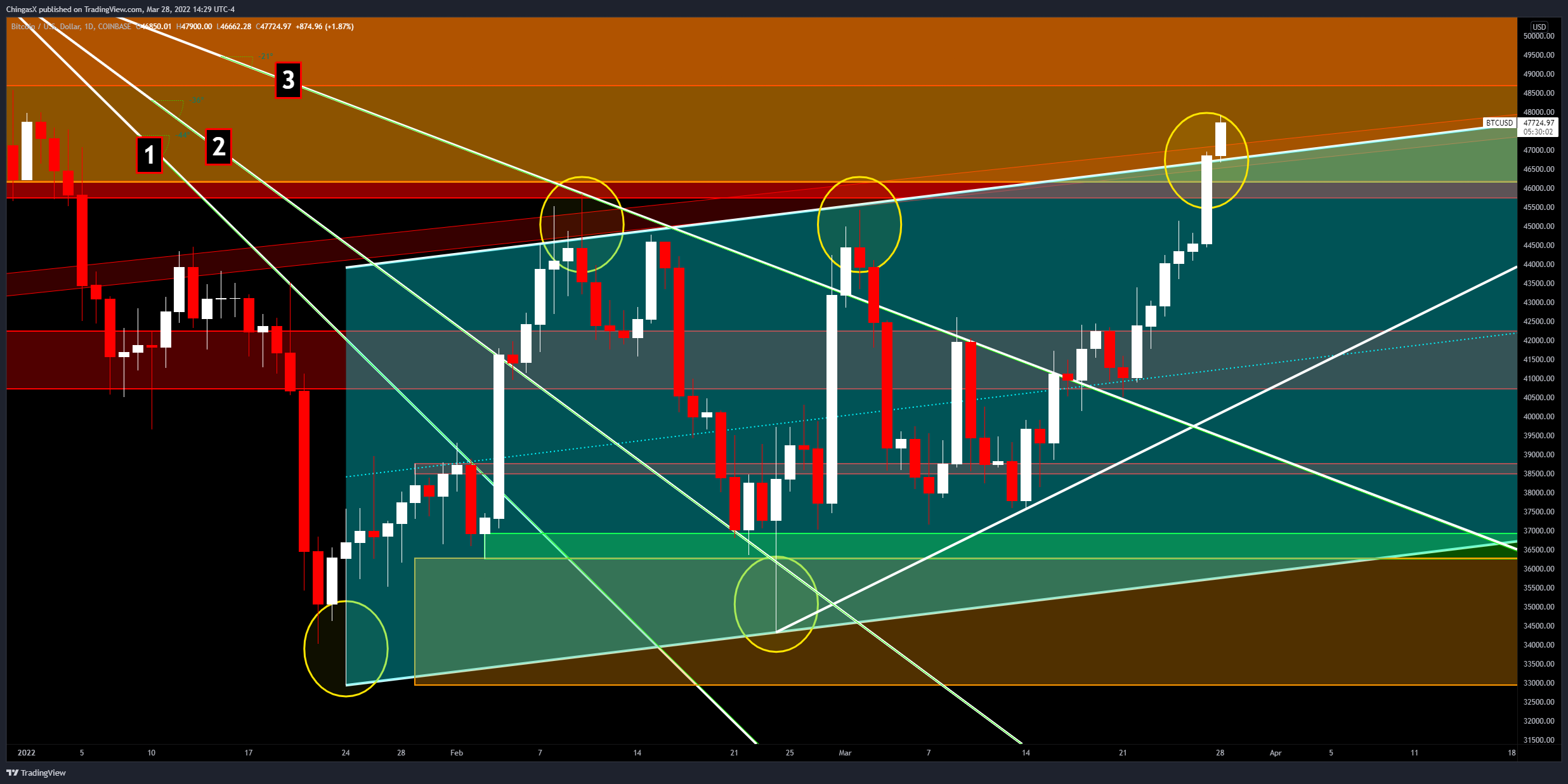 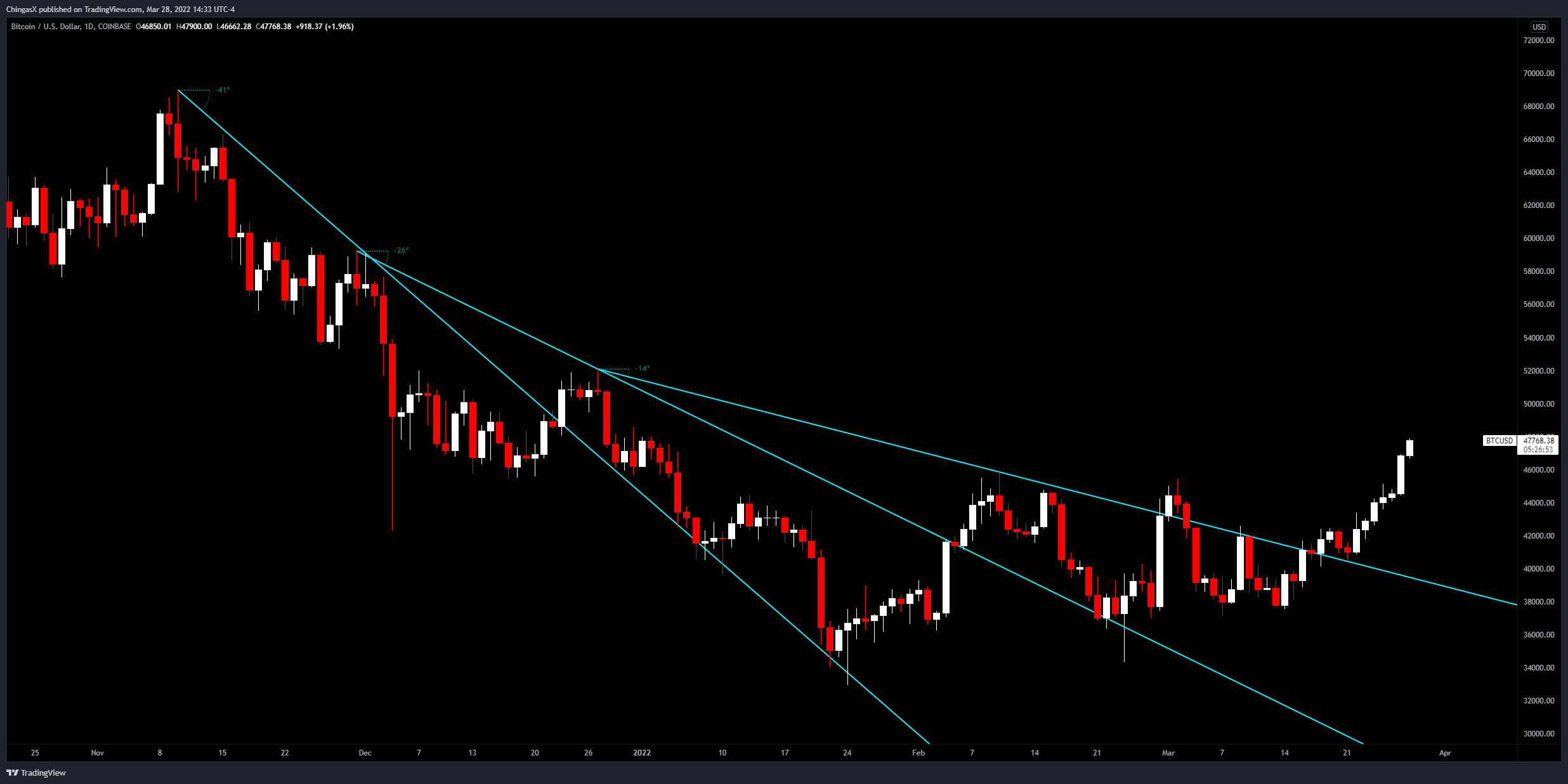 Bitcoin Daily has made ALL THE RIGHT MOVES.  We broke from a longer term trend and that carried us 6 candles in a row straight to the top of the channel after the retest.  This is exactly what you want to see.  Now, Resistance would have been expected at the top of the Channel but the momentum so far has carried action above and beyond.  We are now trading back in that temporary range that we spent a lot of December trading in.

One thing to not is the weakening of the overall Downtrend.  The Initial trend down from the ATH in the current view is showing an angle of 41 degrees.  That is pretty steep.  More importantly is the next trend that reduces the angle to only 26 degrees.  Now, the trend that we just broke early in the week was reduced to 14 degrees.  As we can see, the downtrend has gotten weaker and weaker and that is another great sign for a potential reversal! 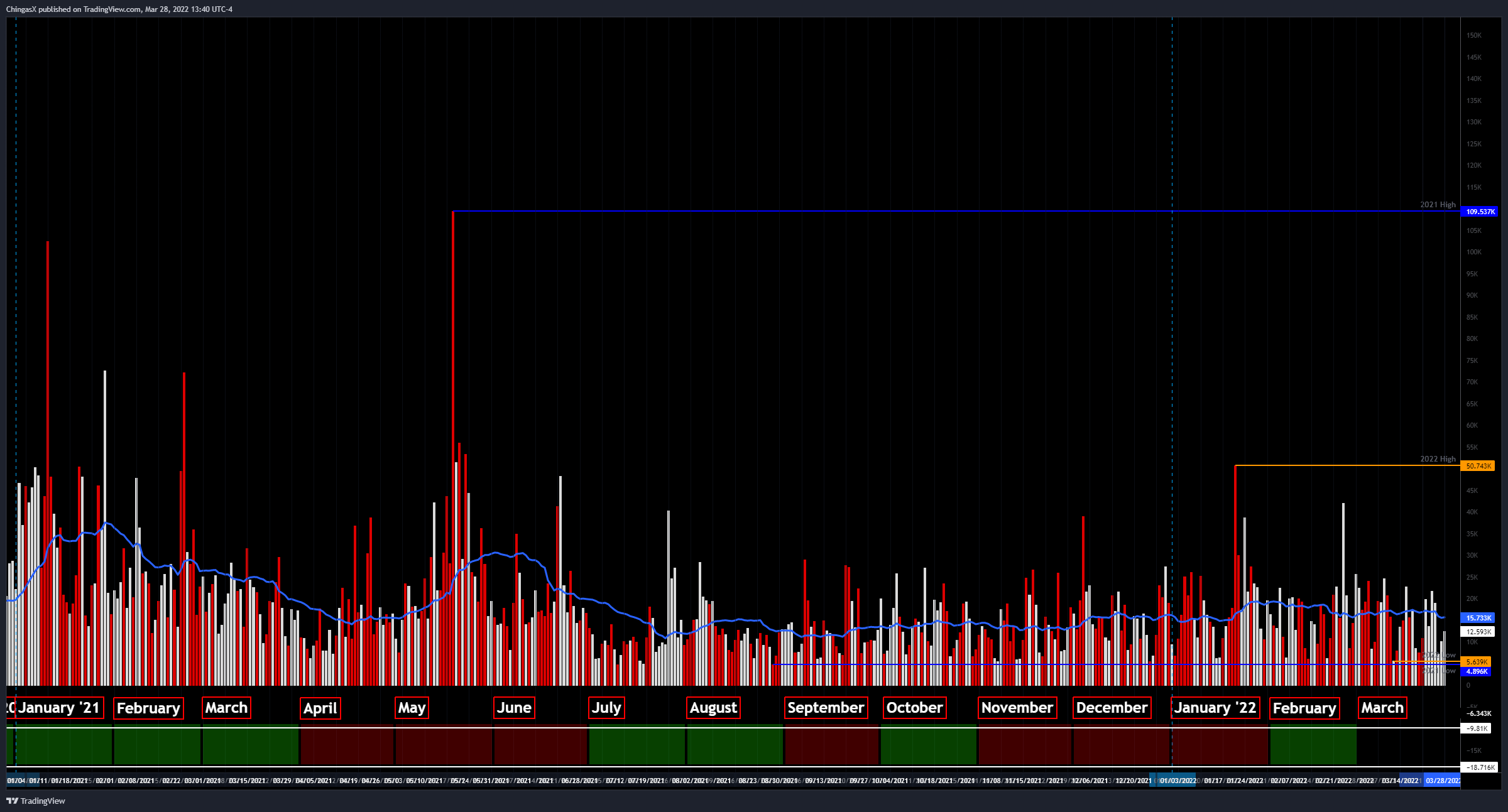 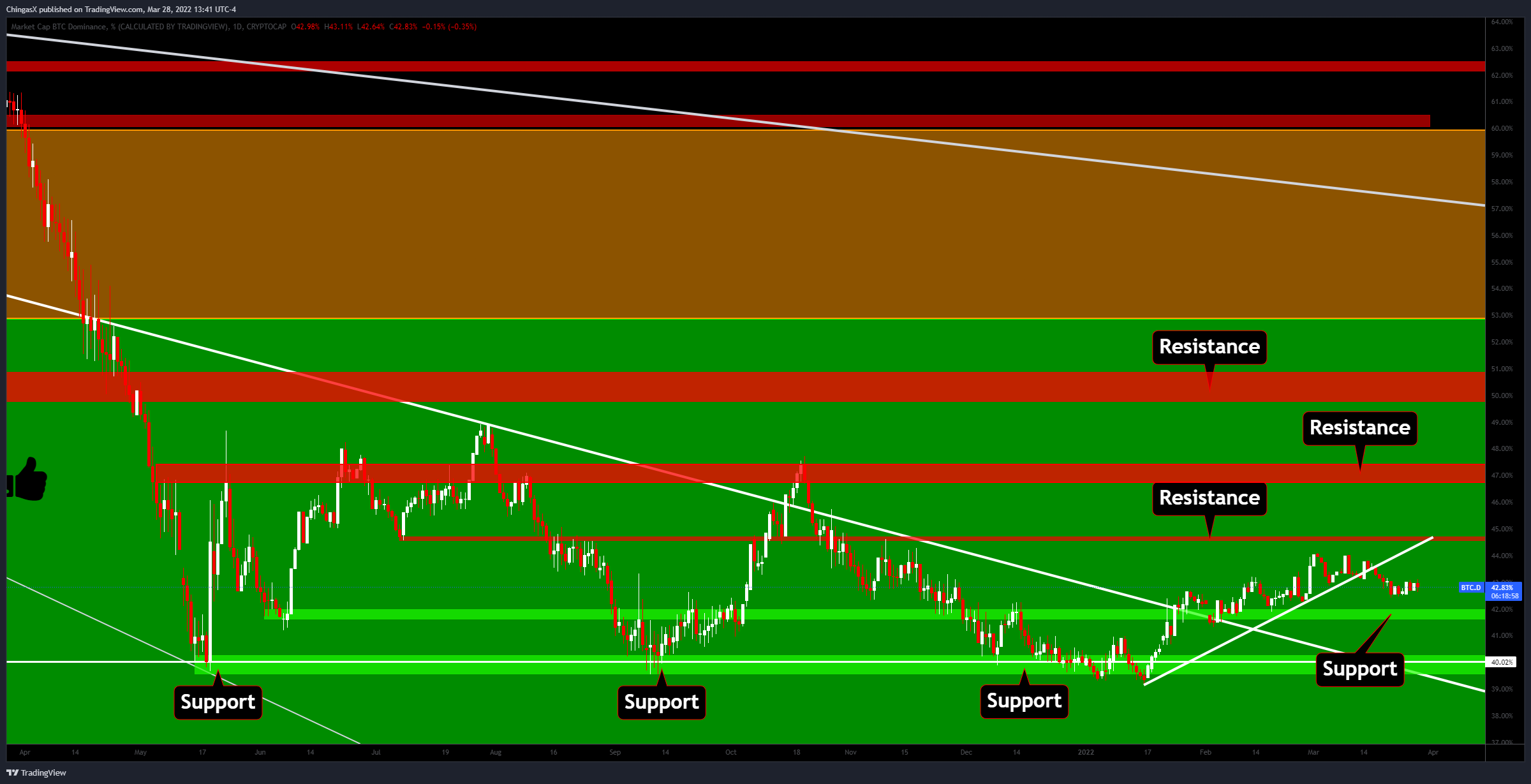 Bitcoin Dominance has yet to fall down to Support.  At the moment – it’s just moving sideways.  A little up and a little down but not down enough to need support and not high enough to test resistance.  Meanwhile – Alts are moving.  This is generally a recipe for more sideways action for Bitcoin but with the recent moves to $47K, this is no longer a valid theory.  Unless, of course, this is a fakeout. 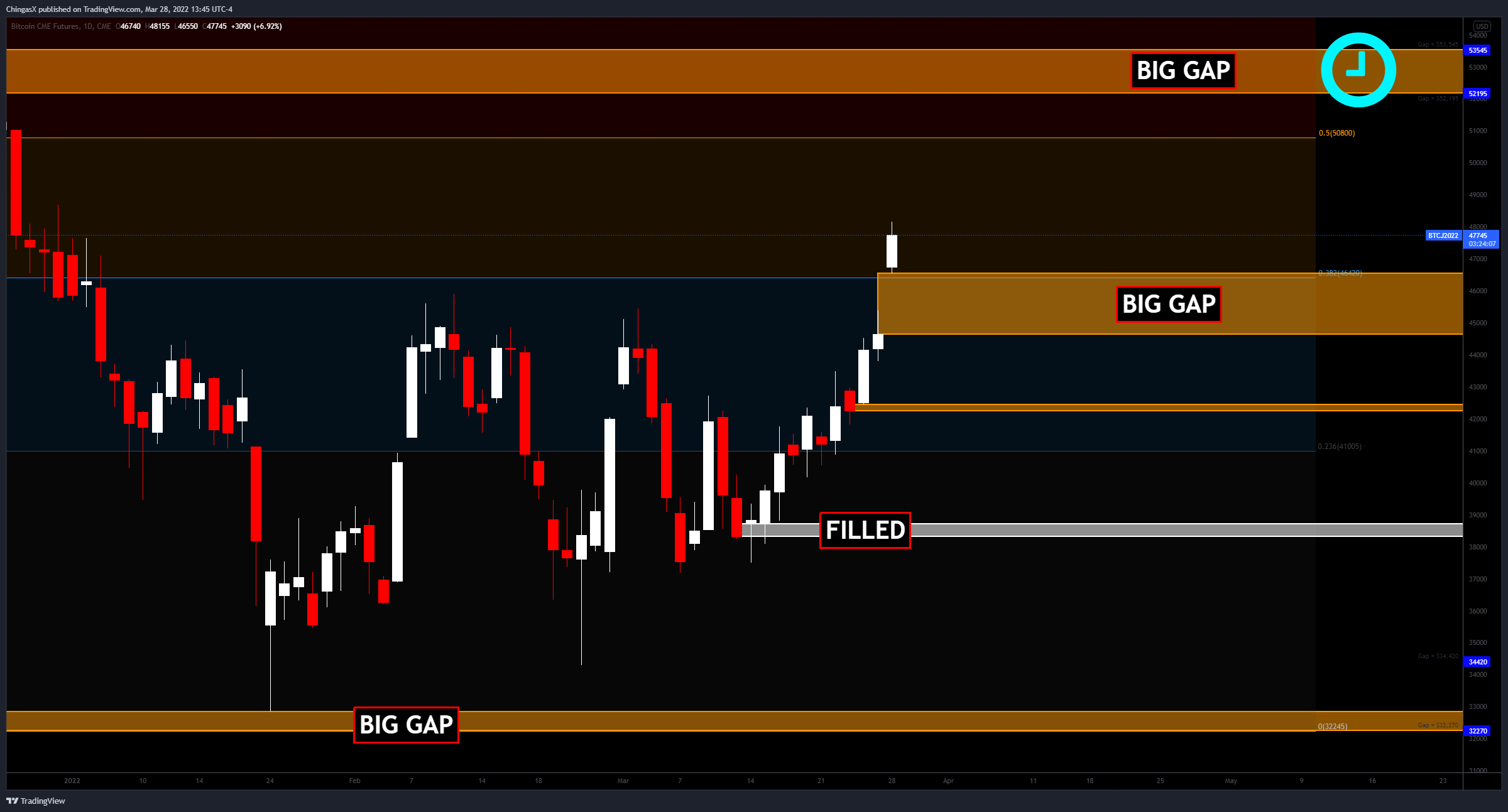 Well, well, well.  This is what the Monday trader hates to see.  A run-up on the Weekend leading to a massive gap on Monday.  Couple this with the gap from last week that was not fully filled and we are potentially looking at a pretty nasty selloff.  Never rule out the $5000 dump candle that turns into a wick when the music stops and the candles print on the chart for eternity.  We have seen them far too many times. 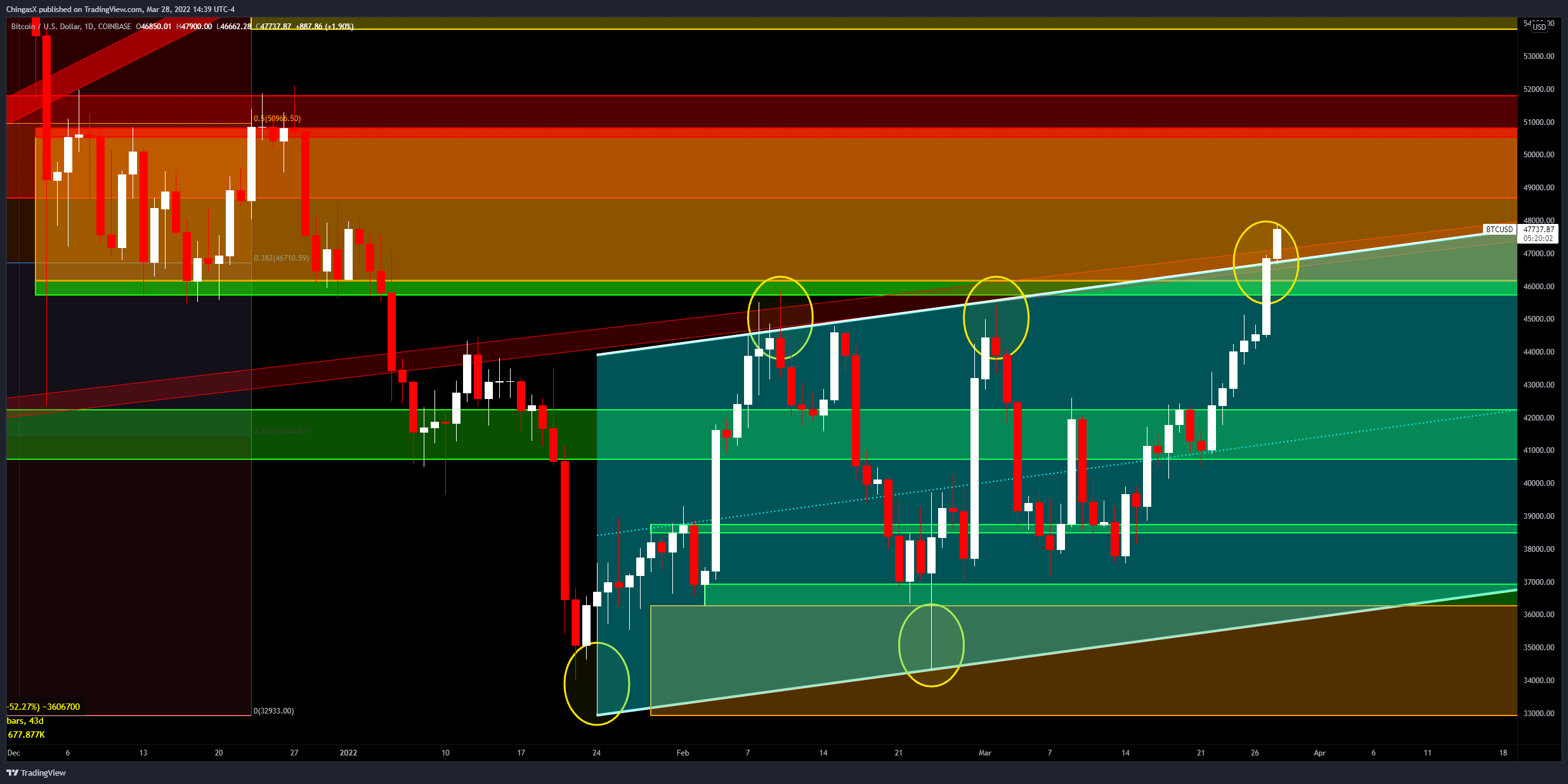 Most would agree that it is a sight for sore eyes when we can see some green on the charts instead of all that red.  The $42K Zone has been flipped proper and we can utilize that down the road if needed.  $46K was a pivotal moment as well and instead of being rejected as it has twice in the past, Bitcoin was able to push through with force.  This unlocks the thought that momentum is behind the Bulls as they try to recover from this current downtrend.

We are trading back in the range we setup in early December.  This area has a lot of forgotten orders and trapped Buyers that may be looking to break even or get out completely.  There is a chance we stay in this zone for a very long time.  The middle ground over here is around $48,500, so we look to be on the higher side of the range if at all possible for a majority of the time we are here in the first place.

This is also not to say we can’t fail these levels here and come plummeting downward.  The good news is that the trend is shifting as we can see from the charts.  The bad news is that we still have a ton of resistance to deal with up ahead.