What a pleasant surprise we had last week.  Despite everything in the media, everything around the world and all the buildup to the FOMC meeting, we saw positive gains for a lot of Crypto across the board.
Currently we are looking at a 7-Day gain for the following Top-5:
BTC: 9.54%
ETH: 13.90%
BNB: 8%
XRP: 7.05%
LUNA: 4.57%

Global Market Cap and Global Volume is currently down slightly.  This has been the first positive week in the books for Bitcoin that was over a 2% move since January 31st, 2022.  Remarkedly, last weeks High was $14 Higher than the Close of that weekly candle back in January. 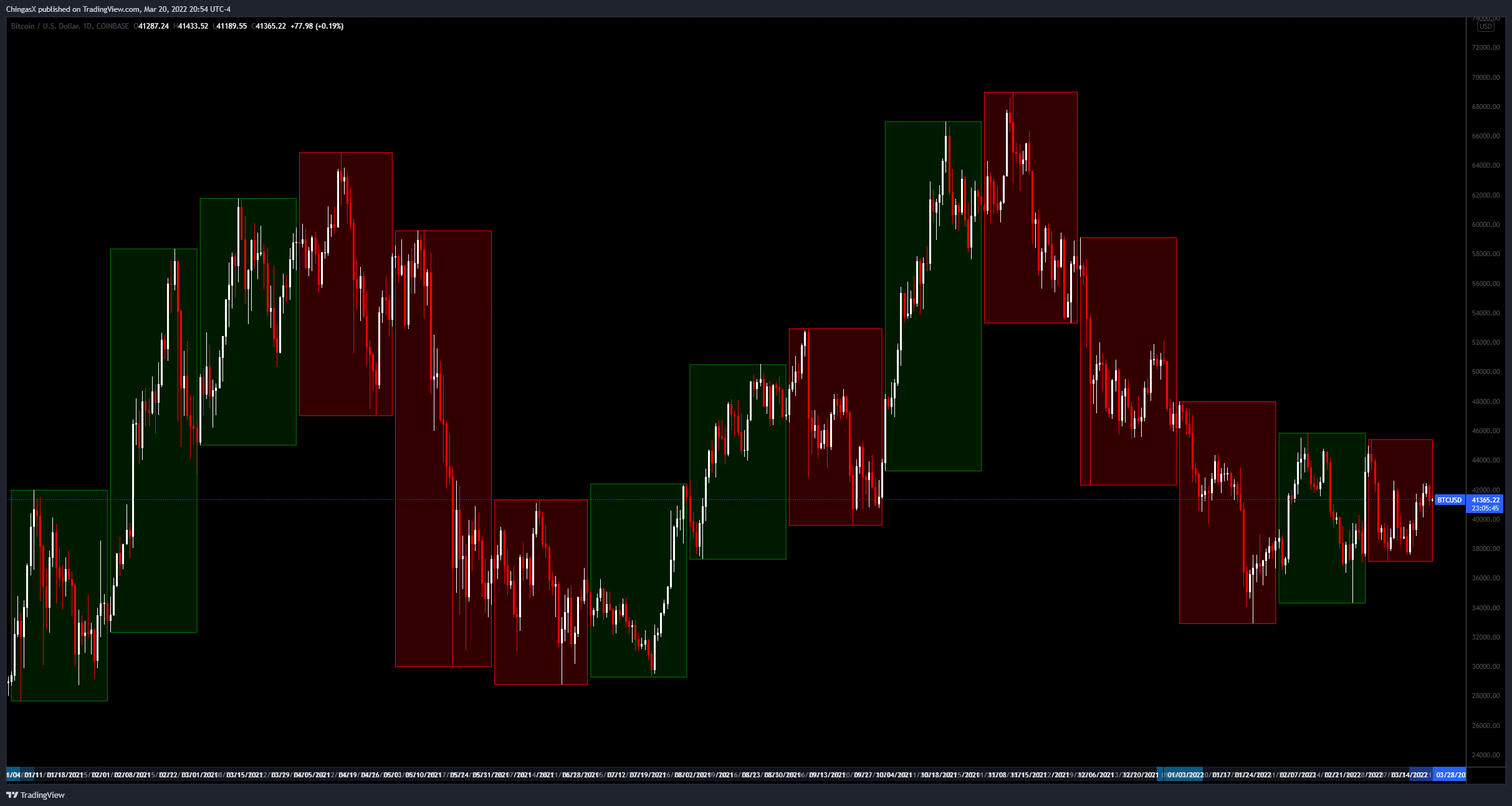 Sideways but UP.  That is the talk of the town when it comes to a monthly chart or a long-term view for Bitcoin.  Look at the last three months and what stands out is that the Lows for those months are Higher each time.  Now, the Highs for each of those same months are indeed Lower than the previous.  This is called Consolidation.  The wild price action from the start starts to tighten its range on each successive cycle.  Eventually we look to see the action tighten up right near the Apex and then explode either Up or Down.  For now, traders want to see March end Green and they want to see the previous local Highs challenged and beat. 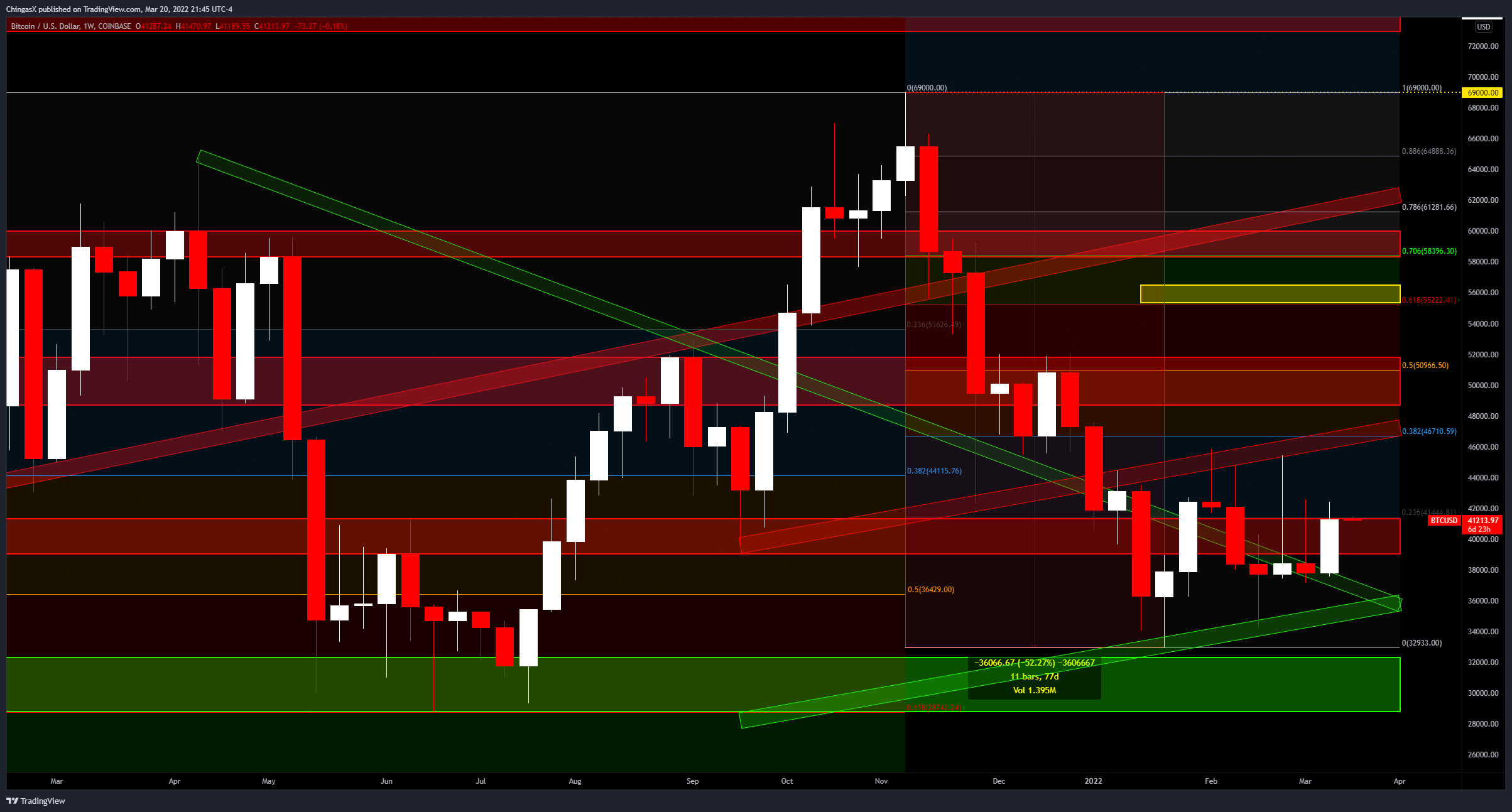 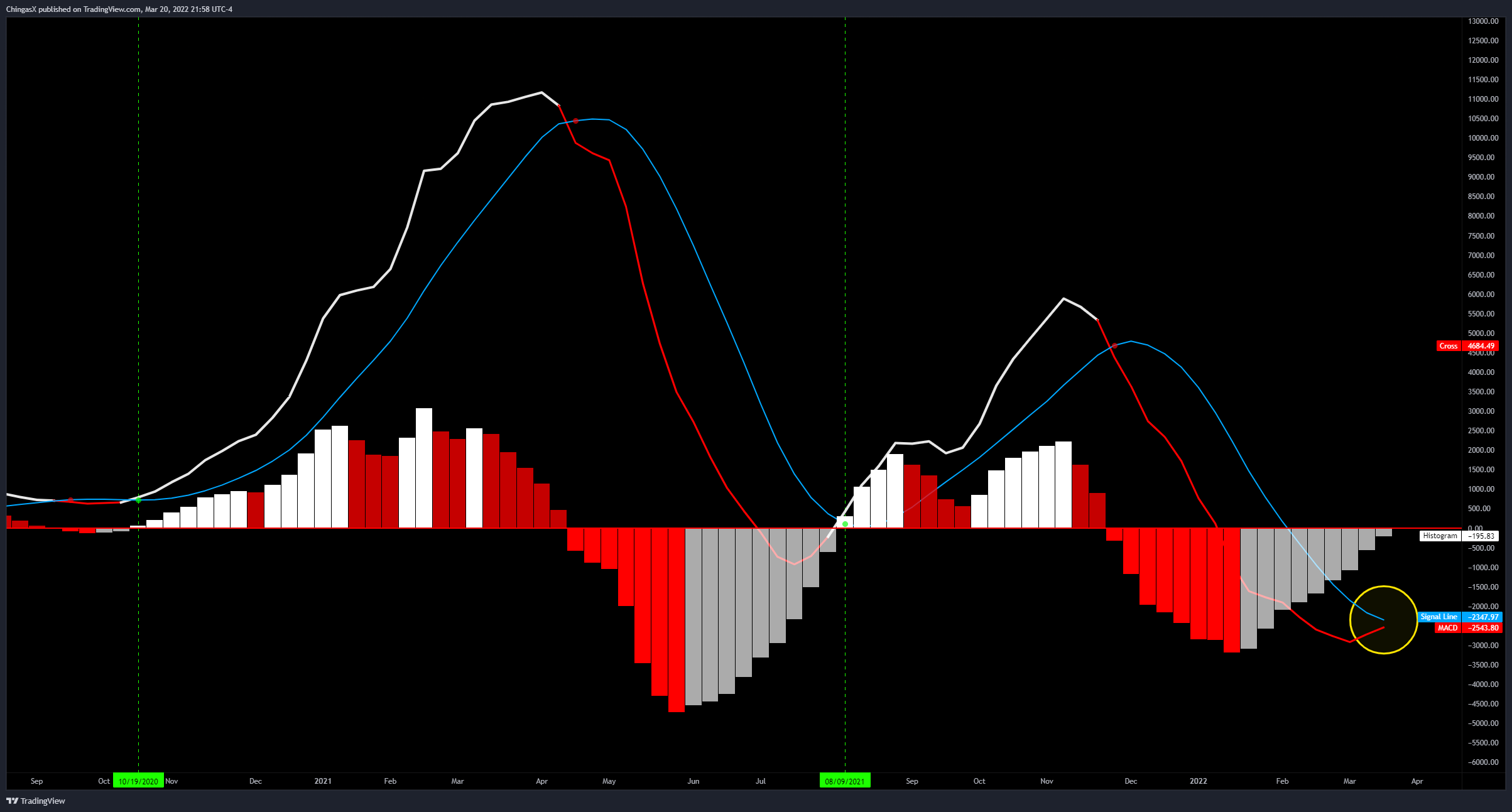 Bitcoin put in a $3500 Weekly Candle and to boot, it closed near its high.  Generally speaking this is a Bullish Candle but looking back in Bitcoins recent history, these candles have been nothing but trouble.  December 20th, 2021 and January 31st, 2022 are two recent examples of Bitcoin failing after a decent weeks candle.  What would this time be different?  Even further analysis will show that all three candles suffered a non-breakout of the 30-Day Volume average.  One major noticeable difference is the overwhelming slow down of the downtrend.  Where the previous two examples were heavy into a downtrend, last weeks candle is coming during a sideways market – giving the Bulls a nod in the favor of their preferred direction.

Another thing to note hear is the Weekly MACD.  The MACD at this time resolution can be very interesting as it takes months to see any actionable signals.  The current MACD and Signal line on the Weekly Chart are less than 200 points from each other.  A crossover has not happened yet but if we are to even trade sideways then we would likely see one this week.  The last two crossovers date back to October of 2020.
10-20-2020 – X-Over = 468% Move Up
08-09-21 – X-Over = 57% Move Up
Certainly no guarantees here and we are still in a downtrend, so even if we were to get a cross over, we would need to see a High that rivaled the high in August – which by the way was the All Time High of $69K. 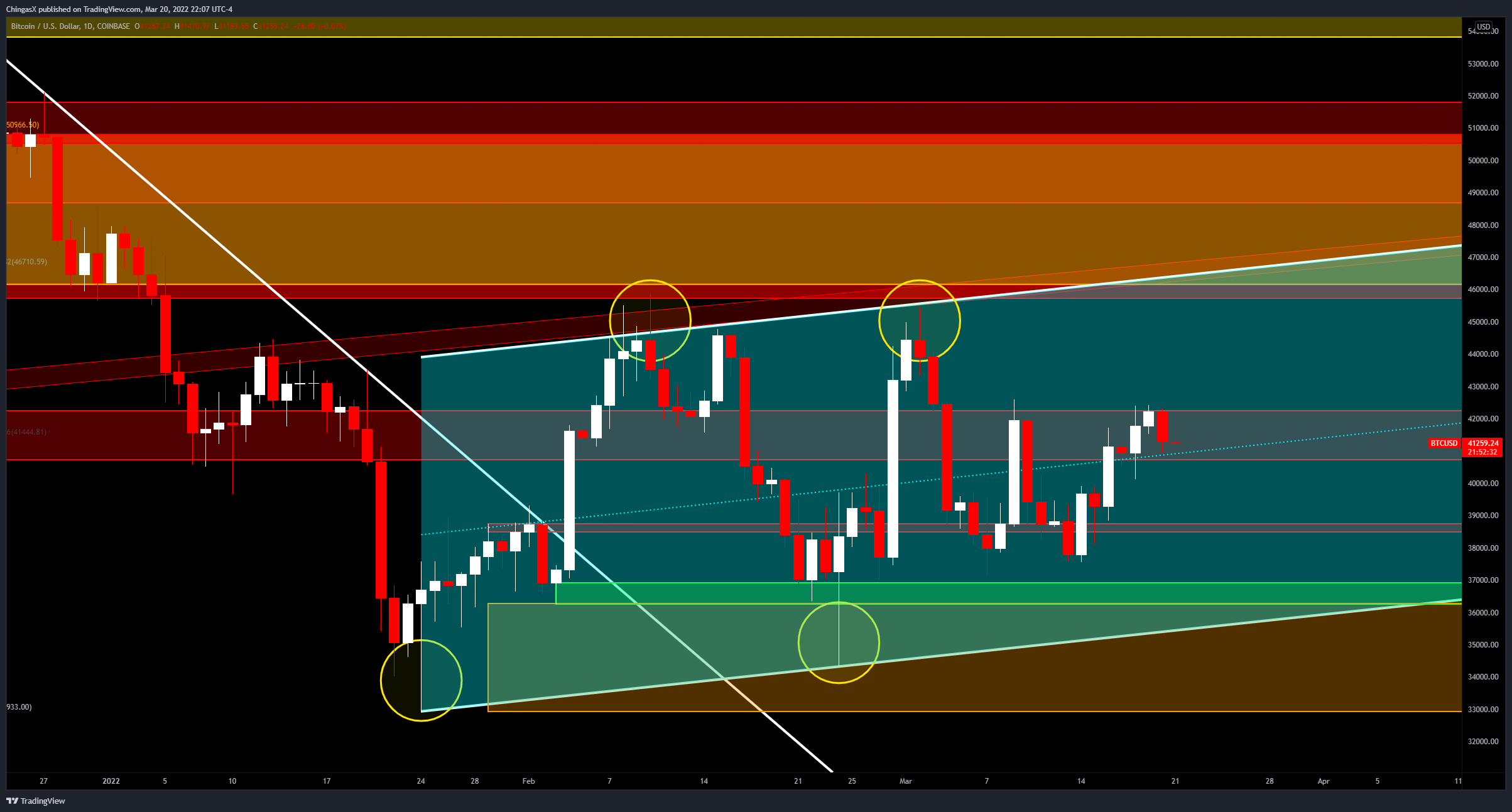 The Bitcoin Daily Chart is an interesting one indeed.  Last week we saw a rally back to the top of local resistance at $42,250.  Three days in a row that level was tested and three days in a a row the Bulls failed to flip the level into Support.

The action comes at the same time as the Medium Line for the current Channel lends its hands as Support to the overall price action.  That Medium line is the Centerline to the Rising Channel you see in Aqua on the chart.

Meanwhile, the pullback low after the last $42,250 rejection has been a Higher Low than previously.  Again, these little things help to onboard more traders as they start to see support holding and local trends forming.  If we want to see some serious change in this back and forth then we want to see the bulls break out of the channel to the high side.  This would, in turn, break the previous two attempts highs and give the appeal to risk adverse traders to buy in.

On the Bearish side, a break through the bottom side of the Channel without any slow  down in force would be a clear sign that the Bears were simple just playing with the Bulls as they look for more and more exit liquidity. 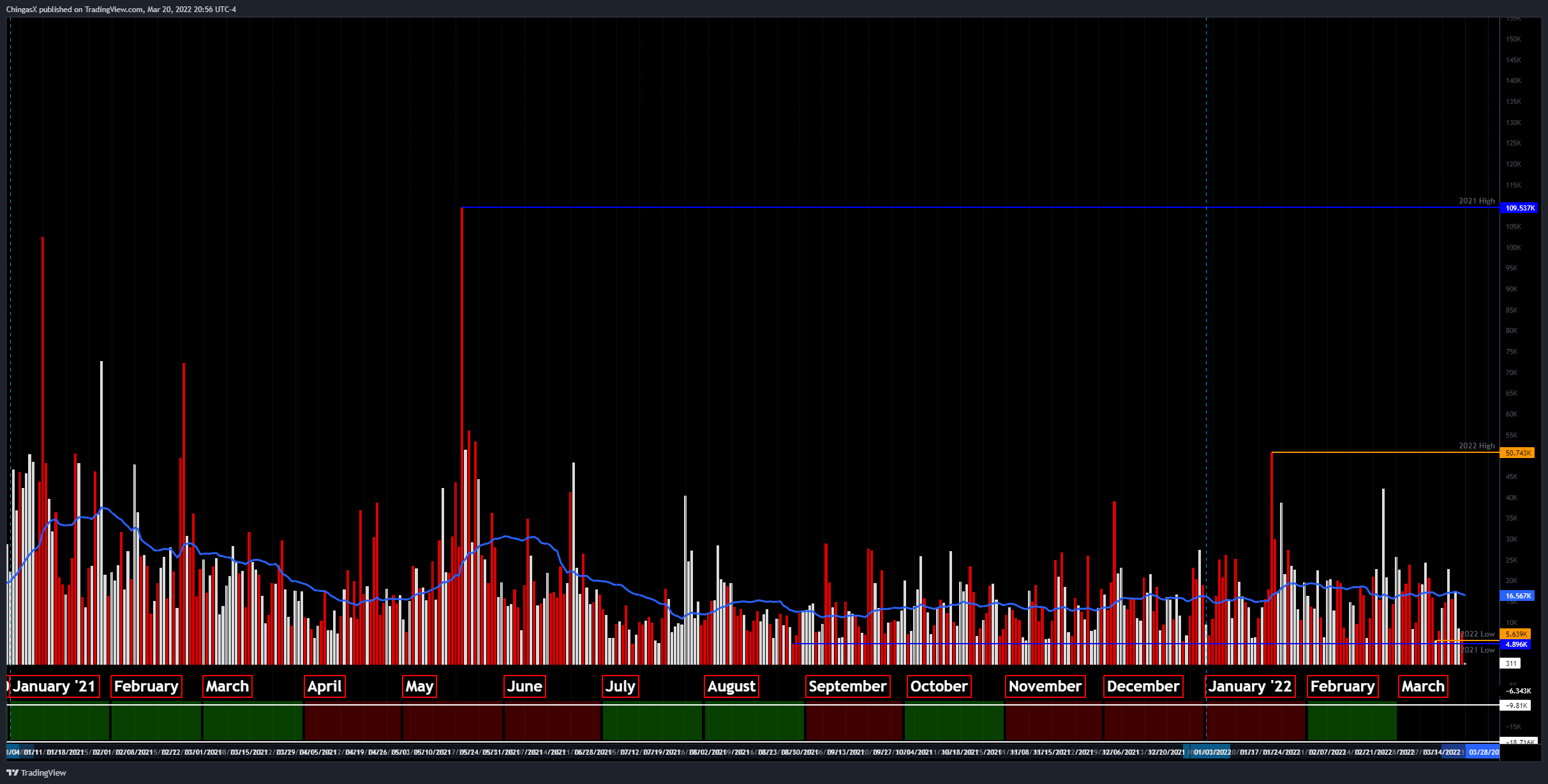 Volume is always a hot topic as it is still one of the leading factors in deciding whether the overall sentiment is true or not.  A Big Move followed by little volume is a move not to take seriously but a big move with big volume tells you that traders are seriously liking the current action – whether it be Buying pressure or Selling pressure.  Overall volume on the 30-Day has been sideways.  Peak Volume has been trending down for the last 4-weeks.  This can show exhaustion in either the Bulls or the Bears.  It shows that if they were to give it their all – their all would not be that much. 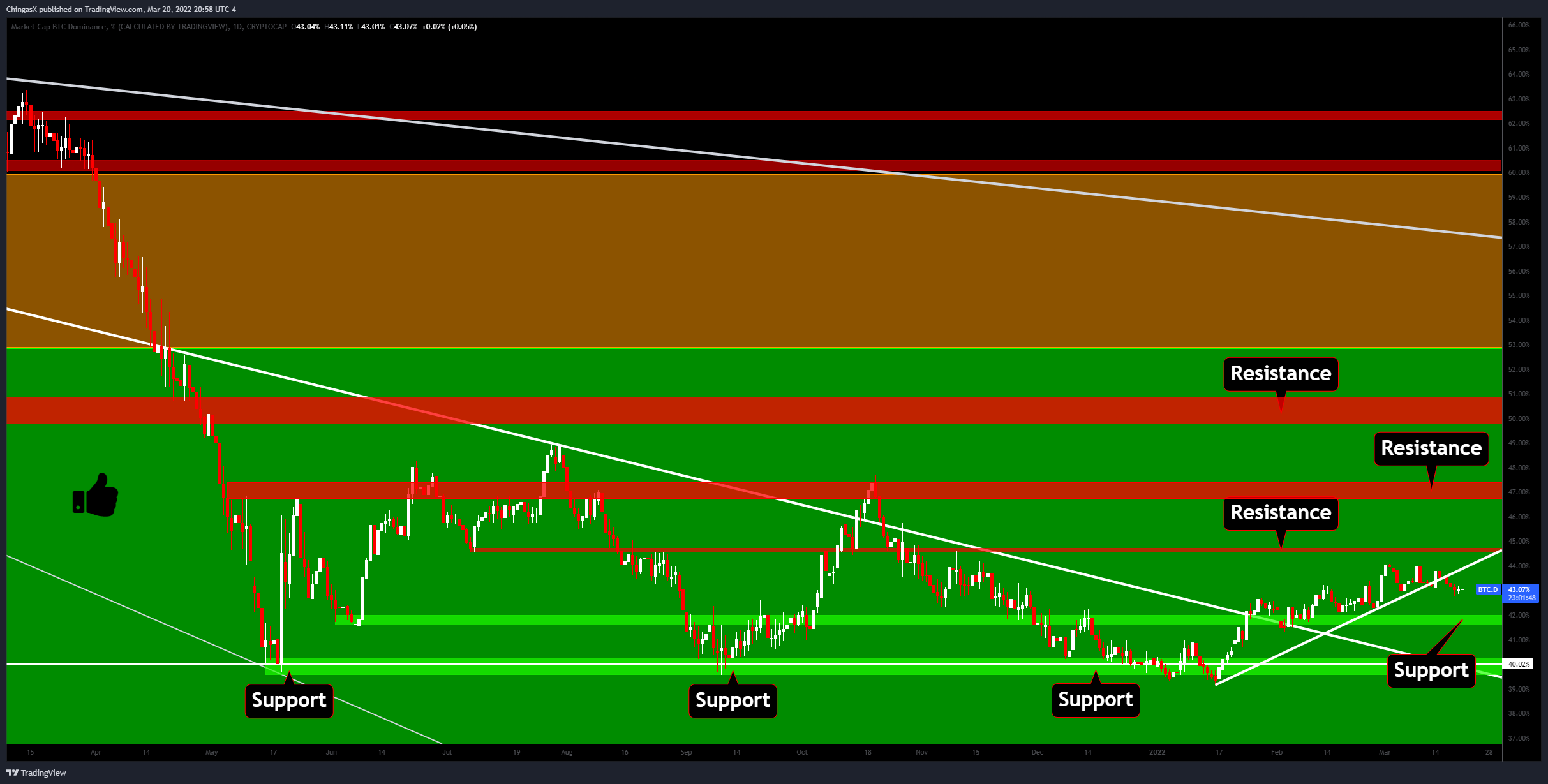 Bitcoin Dominance has broken its local trend to the downside.  This came at a time when all of the Altcoin indexes were on the rise.  This goes for Altcoin, Midcaps and Shitcoins alike.  The takeaway here is that prices were rising on the 10,000+ Altcoins at a faster pace than Bitcoin was increasing in Value.  This in turn lowers the overall Bitcoin Dominance on the entire market as Altcoins now stand to increase value across the board.  This is a unique situation.  One where we can potentially see Bitcoin continue to trade sideways but open the door for some Altcoins to really fly. 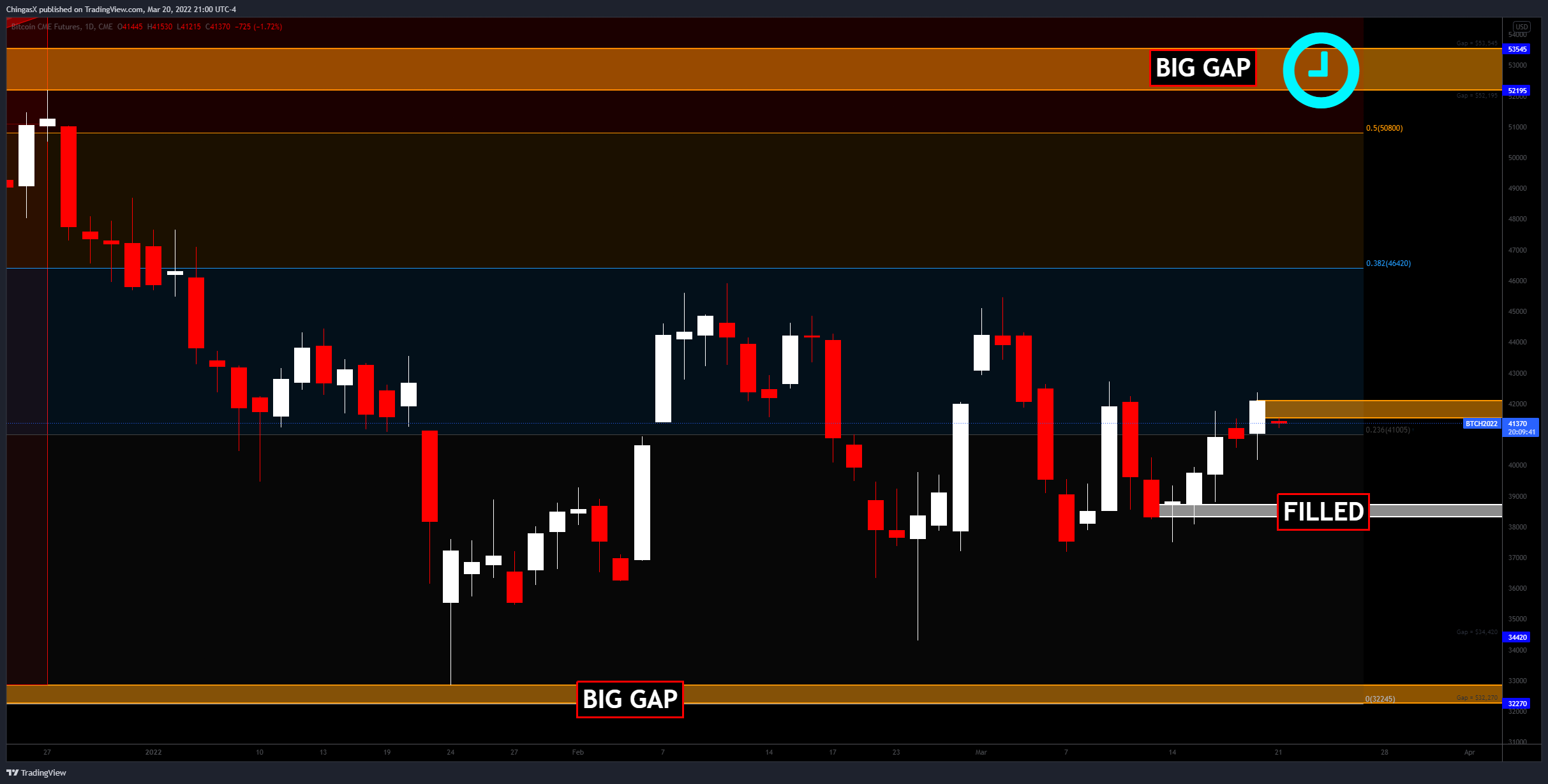 Few charts are more impressive than the Bitcoin CME Futures Chart.  These guys are something else.  Every single Gap since December has been filled.  Today we have a new Gap as the Sunday Opening was far lower than the Friday Close.  Weekly gaps like these are very normal as the weekend trading tends to follow very few rules.  We expect to see this gap filled this week.  Now, we still have two gaps in the somewhat near future.  One major gap above and a series of many gaps below.  If Bitcoin starts trending harder to the high side, then we expect that upper Gap to get filled. 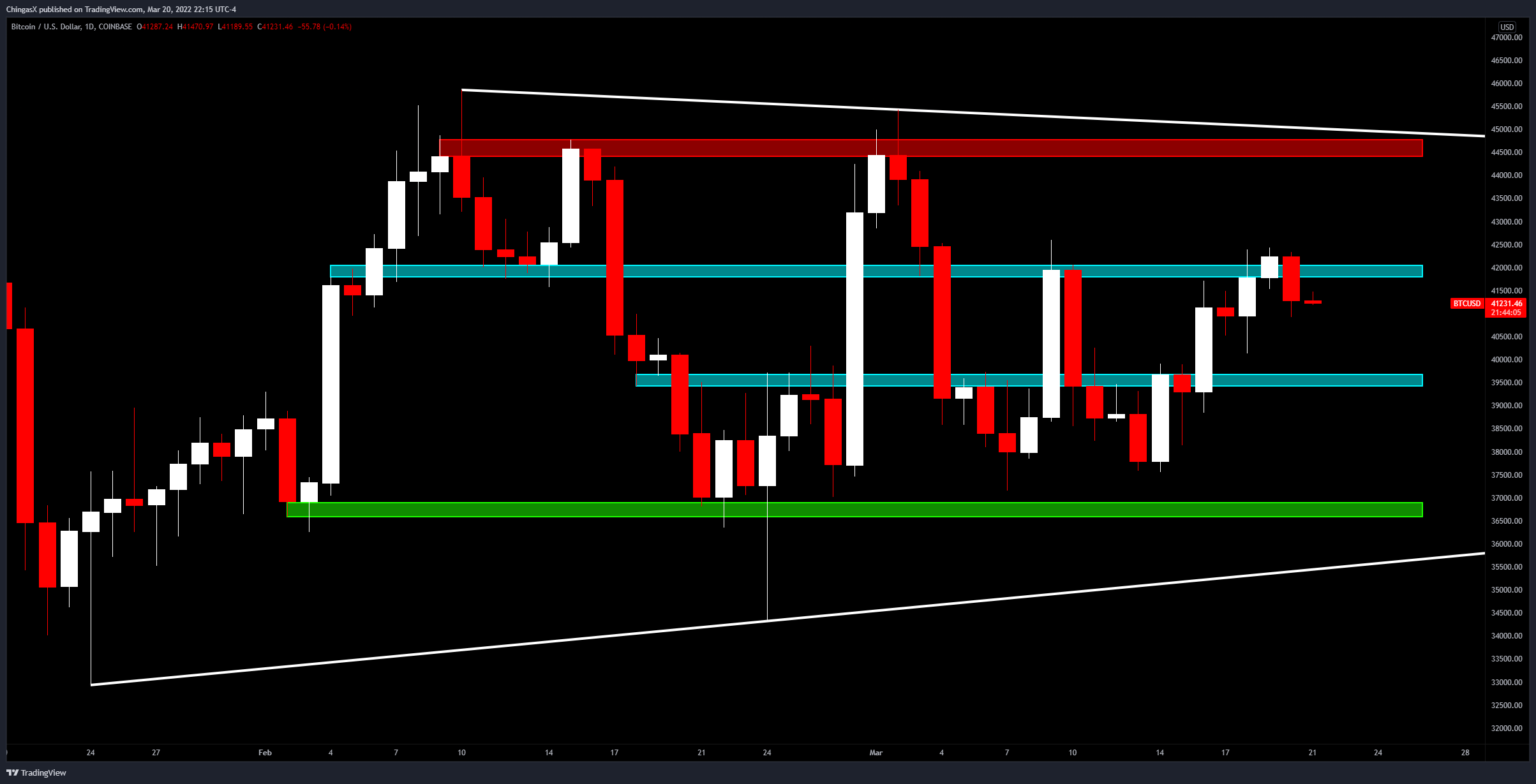 This chart gives you an idea of where the bulk of the trading happens.  These are areas then when reached have a serious reaction.  Traders tend to flock to these areas and that is what they make good zones for Support and Resistance.  The visual you see here is the Overall High Side Upper Resistance and the Overall Low Side Support Zones.  In-between those two zones we can see the internal levels in Blue.  These are the areas to pay attention to as they tend to get hit from both sides – all the time.

These internal levels create much of the unseen sentiment.  Losing the same level again brings in Fear that we will always struggle with this level and breaking through a key levels funnels in a wave of Support for the bulls as traders realize a difficult level has now been flipped.  Regardless, the levels are important.