We can see the Bitcoin rally trying to show itself on the PAS and even the Daily has lightened up a bit.  ETH, BNB and XRP are still looking pretty weak.  LUNA on the other hand is completely unhinged and decoupled from Bitcoin and it actually posting some very impressive gains. 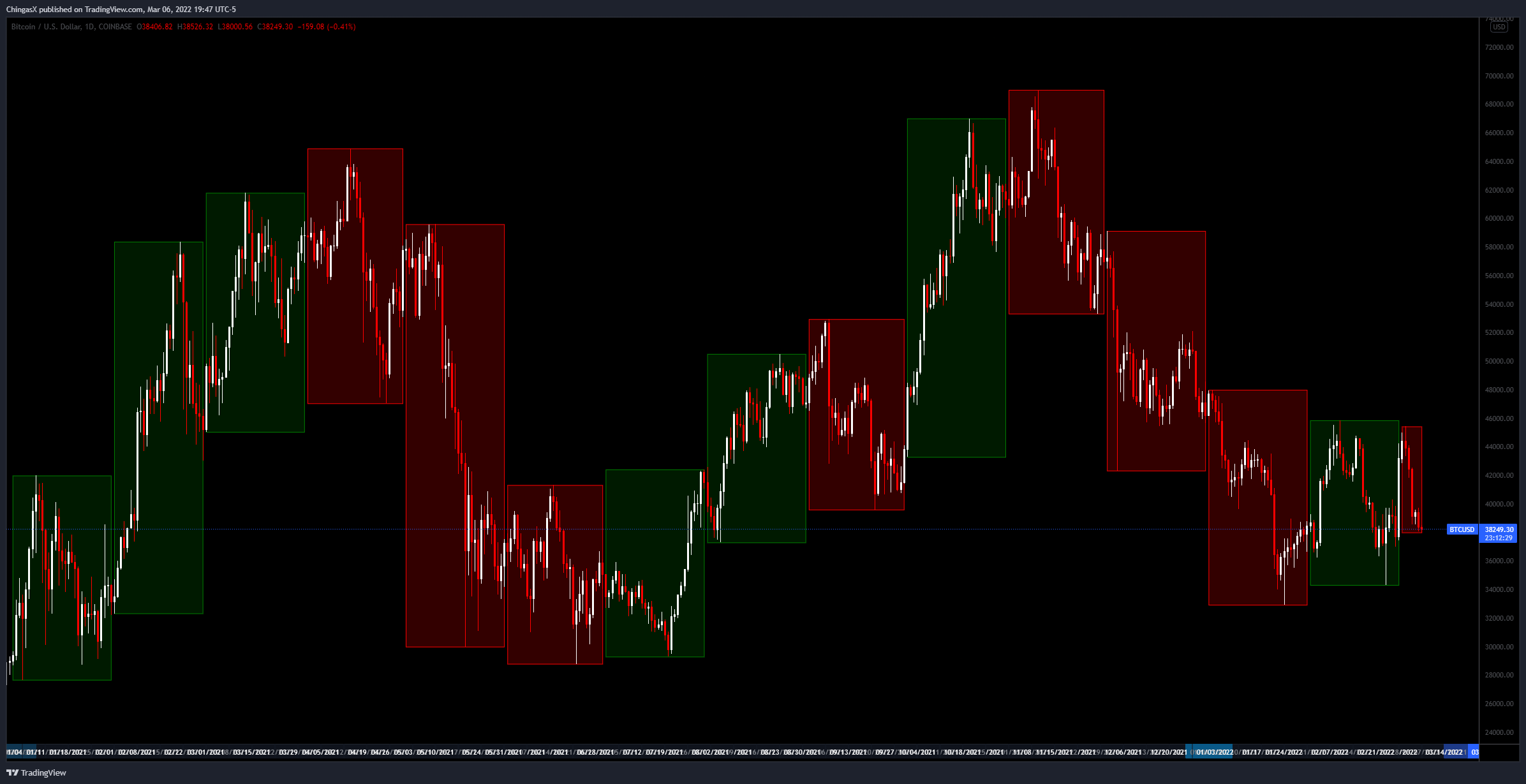 Sort of NO MATTER WHAT IT TAKES – we wanted to see a green month for February and……….. we did!  If there were only 27 days in February then we would have ended the month down 2% but because we had a massive pump candle on the 28th, the month actually closed green with a 12% upward move in the record book.  Even as ugly as things are at the moment – this really does not look too bad for Bitcoin as we are maintaining the larger Macro trend. 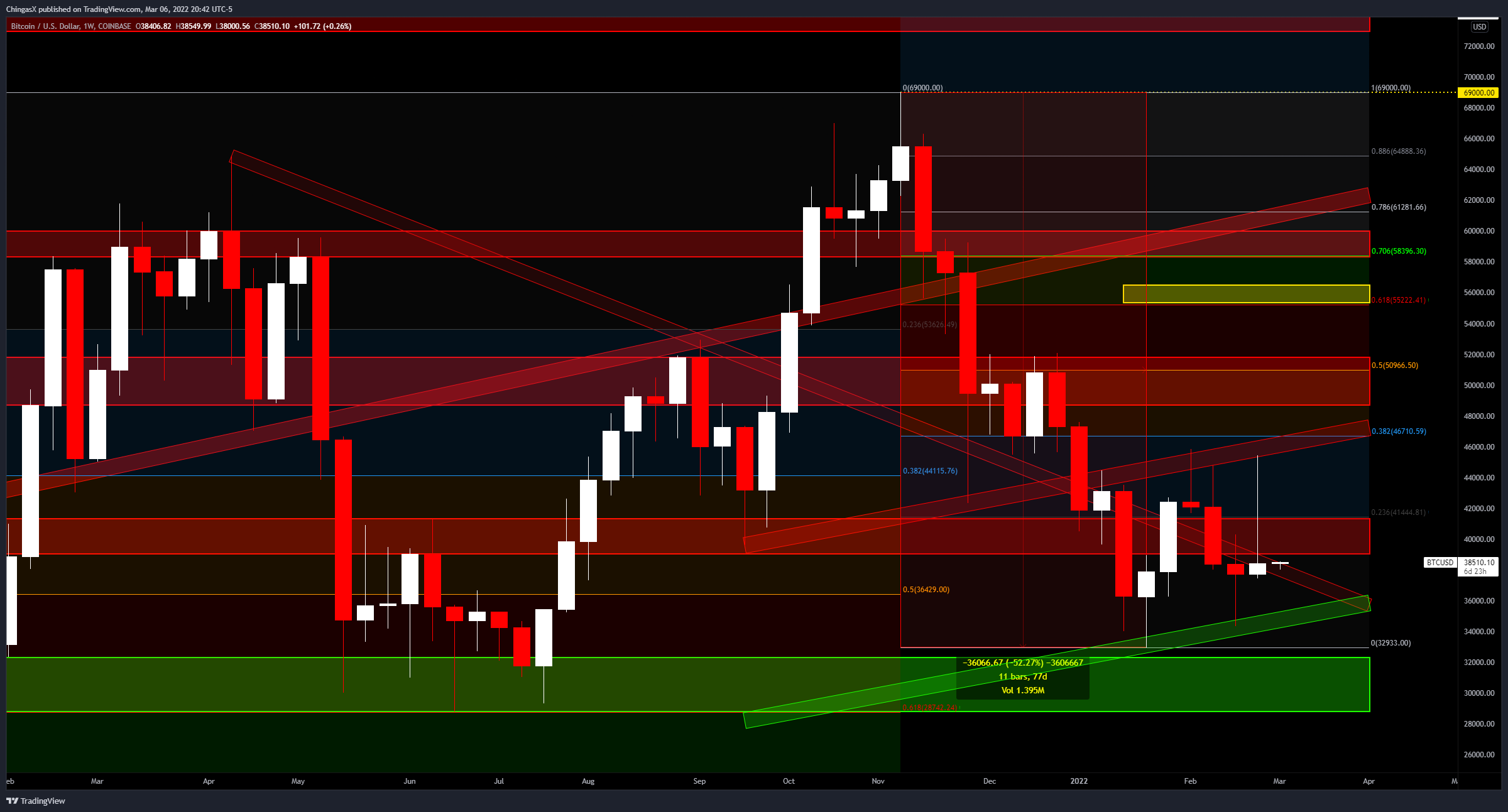 At one point this week Bitcoin was up $7700 from the open last Sunday.  This could have been a very strong candle and a very good reason for investors to start crawling their way back into Bitcoin BUT the longer term investors like to see how the Weekly Candle Closes and this candle lost $7000 of its $7700 gain and that is not a very good look at all.

The other really unfortunate thing is where Bitcoin stopped going up.  It was exactly on our Weekly resistance level that is an upward sloping trend.  This is now the 5th week out of 8 weeks that took resistance on this trendline.

So where do we go from here?  If we continue to ride the channel then our low would be near $34,250 and our high as high as the 38.2 at $46,710.  There is a lower resistance if we draw the two weekly wicks down but we will cover that in the Daily breakdown next. 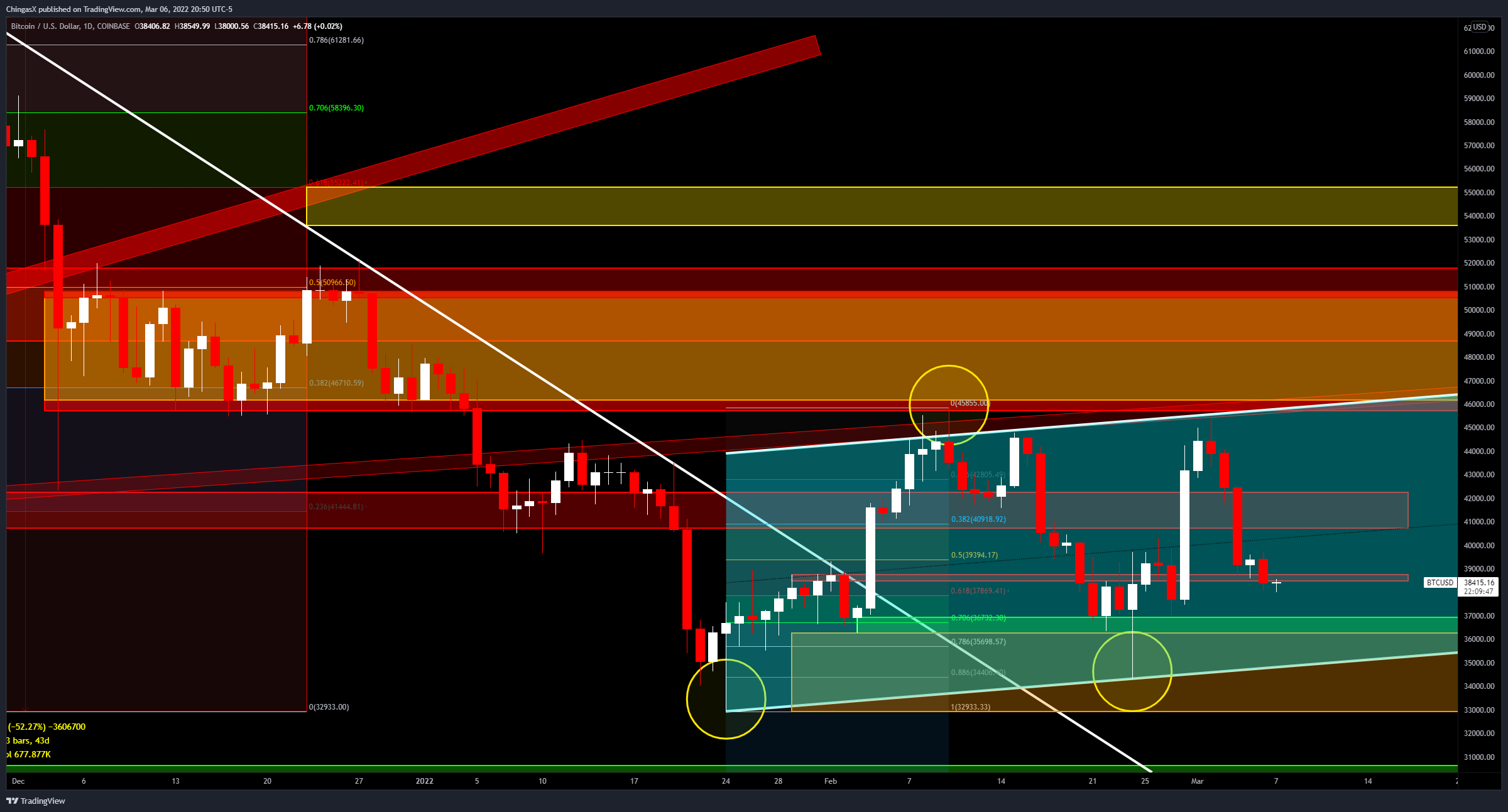 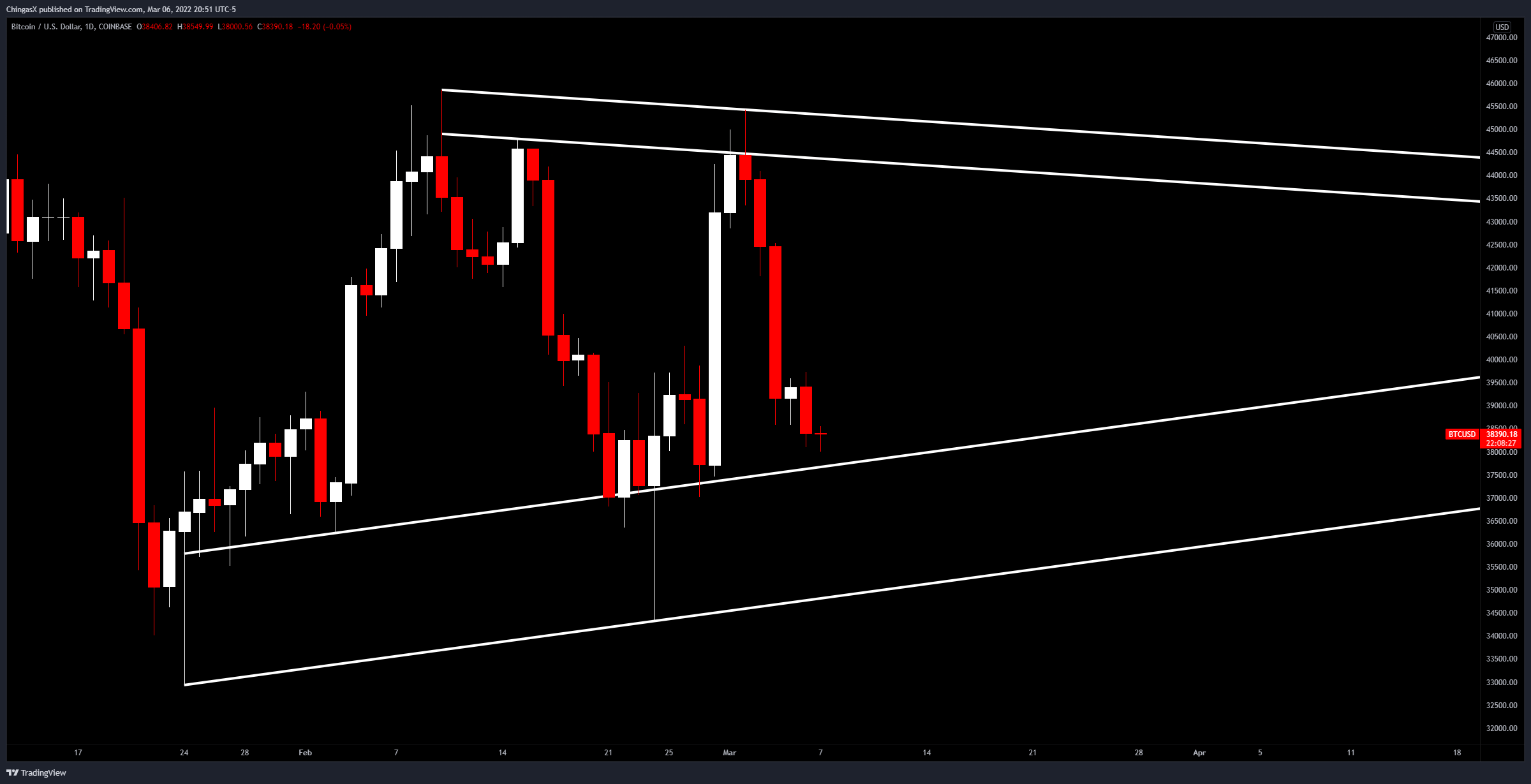 The Daily has to deal with all the ebbs and flows of a regular day in the market and that means massive geo-political events can have an effect on the day to day business of Bitcoin.  Although one is not directly tied to another, the War in Ukraine does have some effects on the people who use and trade Bitcoin and especially the countries that are starting to hold Bitcoin as a currency or a store of value.

The three day 21% pump was almost reminiscent of the old days but it was short lived as Bitcoin nearly gave it all back in about the same time it took to get there.  We are finally starting to get enough data in the sub $46K area to give us a better idea on where local S/R can be found.

For starters, we are building an upward sloping channel.  Even though the channel isn’t perfect it does provide some guidelines in those areas and the lower portion created the guidelines, and it called the top of the pump perfectly.

Also, by using the newly created high side as the lower swing-fail, we can look to the second image and see a Symmetrical Triangle forming.  The inner lines better represent the real trading while the outer lines represent the hard data Highs and Lows.  Now we look to respect both the highs and the lows until we work our way closer to the apex. 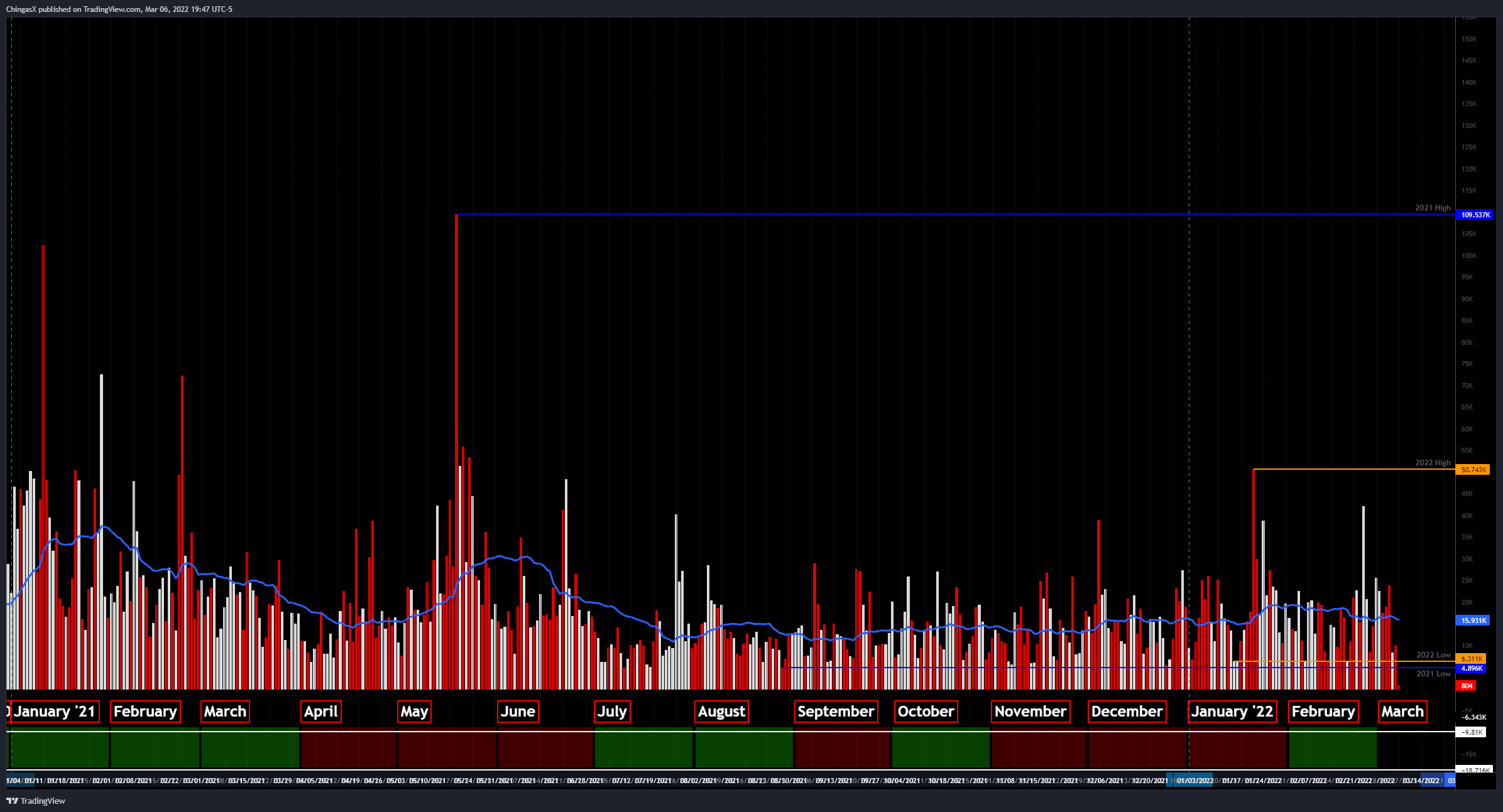 30-Day Volume continues to trend downward as seen by the Blue Average Line on the chart above.  Again, a heartbreaker across the board for all of Crypto.  Sure, we have a few peaks here and there by overall, the volume is just not making any really impressive, sustainable moves.  The good news is that Bitcoin is trending down on dying volume.  This would lead you to believe that the Bears may actually be getting exhausted. 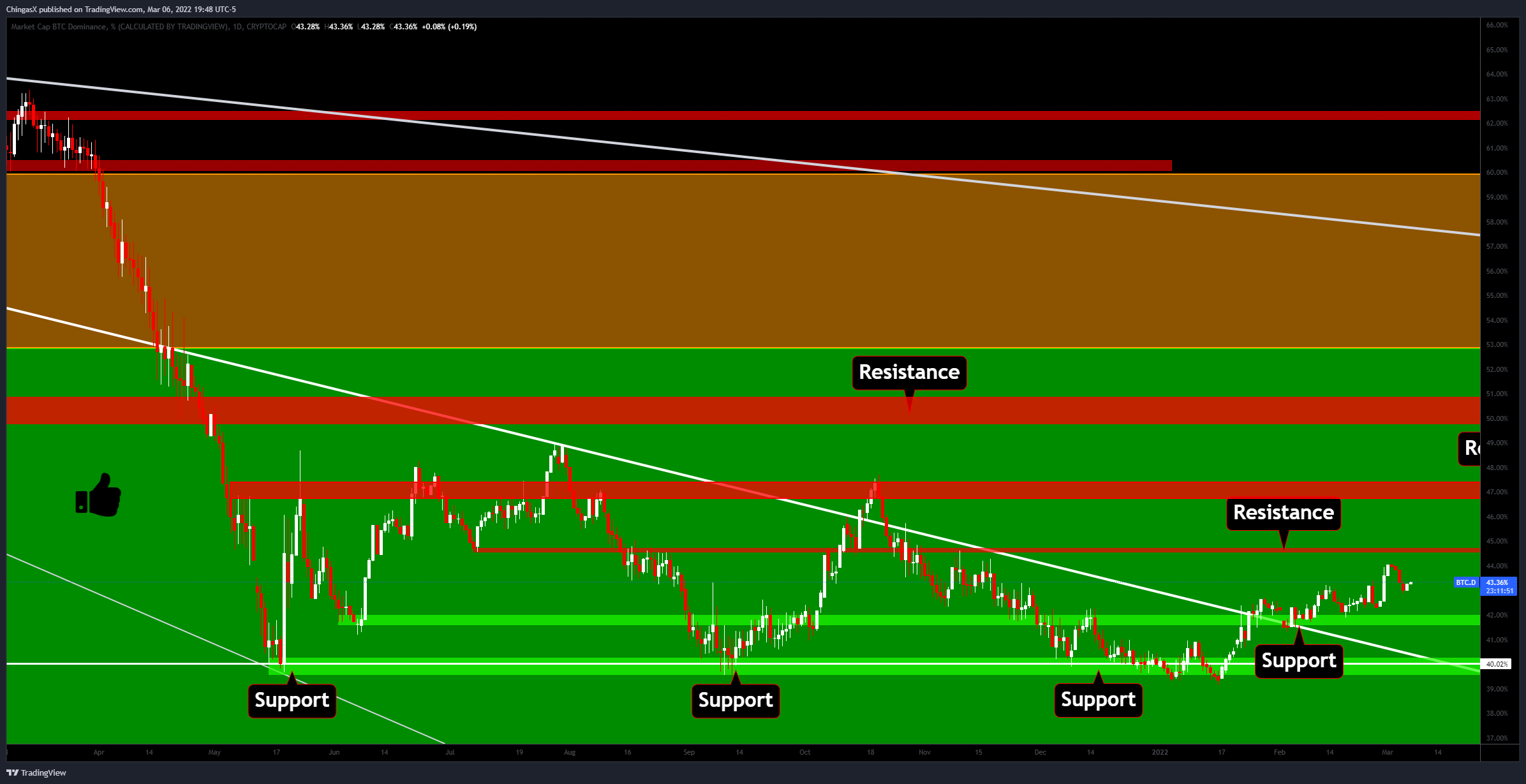 Dominance is just humming along.  It has held its local upward trend but has yet to touchdown on 45% just yet.  If you remember from a few weeks ago, 45% is the next major level we are looking to see Dominance reach.  With the ever grinding Dominance slowly working its way up, it looks more and more promising that we see 45% in the very near future. 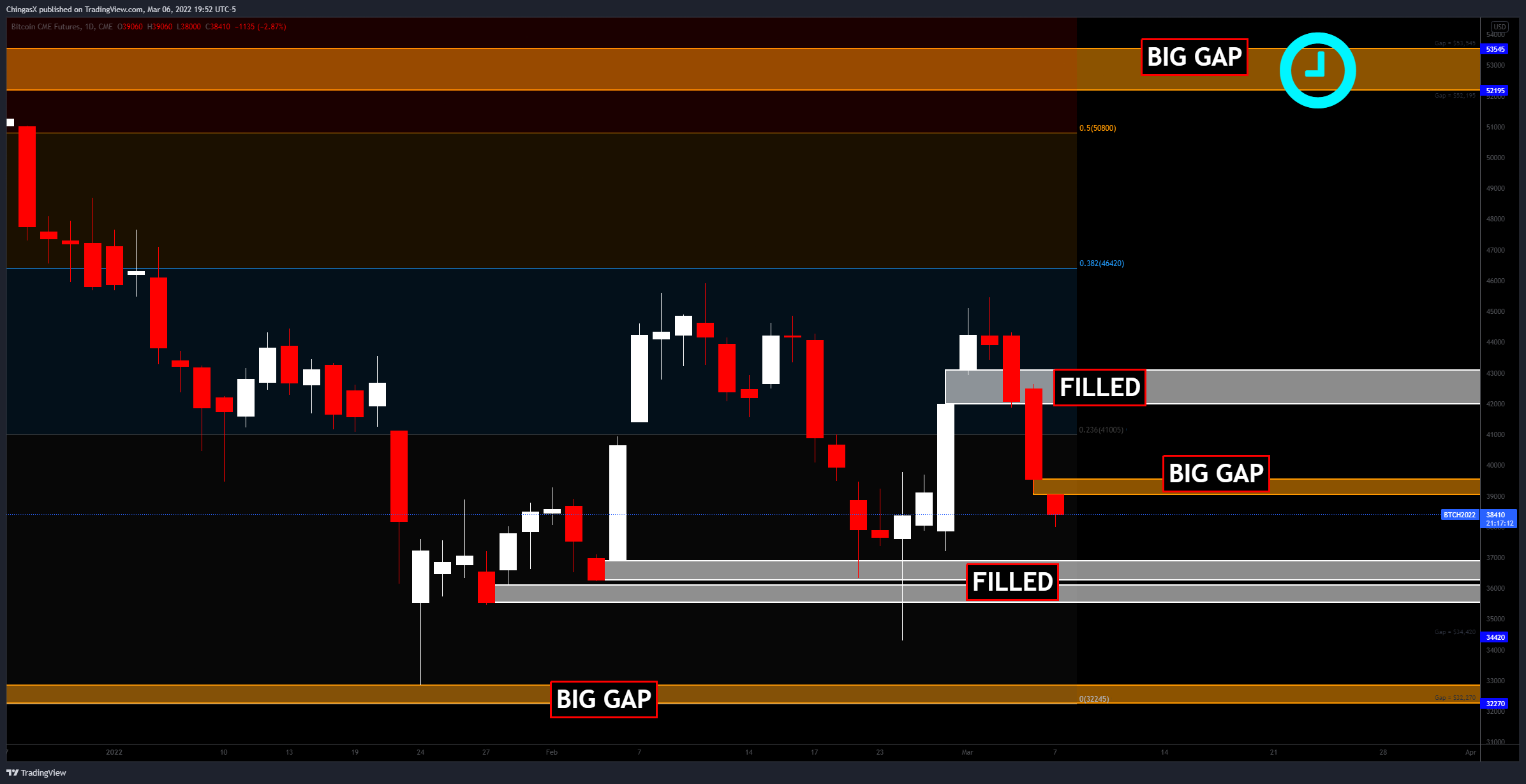 Ahh, the good ol reliable Gap Chart.  First off, let’s reiterate how beautiful the double gap fill on that wick was.  Ok, moving on.  There was a massive Gap left over that the pump candle filled the very next day.  You don’t see that on the chart.  Unfortunately, the large pump candle and the day after created yet another gap that was filled two days later.  The Sunday night open has caused an upper gap from the Friday close but so far today – Bitcoin is just continuing its dump.  We look to get that filled later today or tomorrow and see if the Bulls have any juice to work the price out of the dumpster. 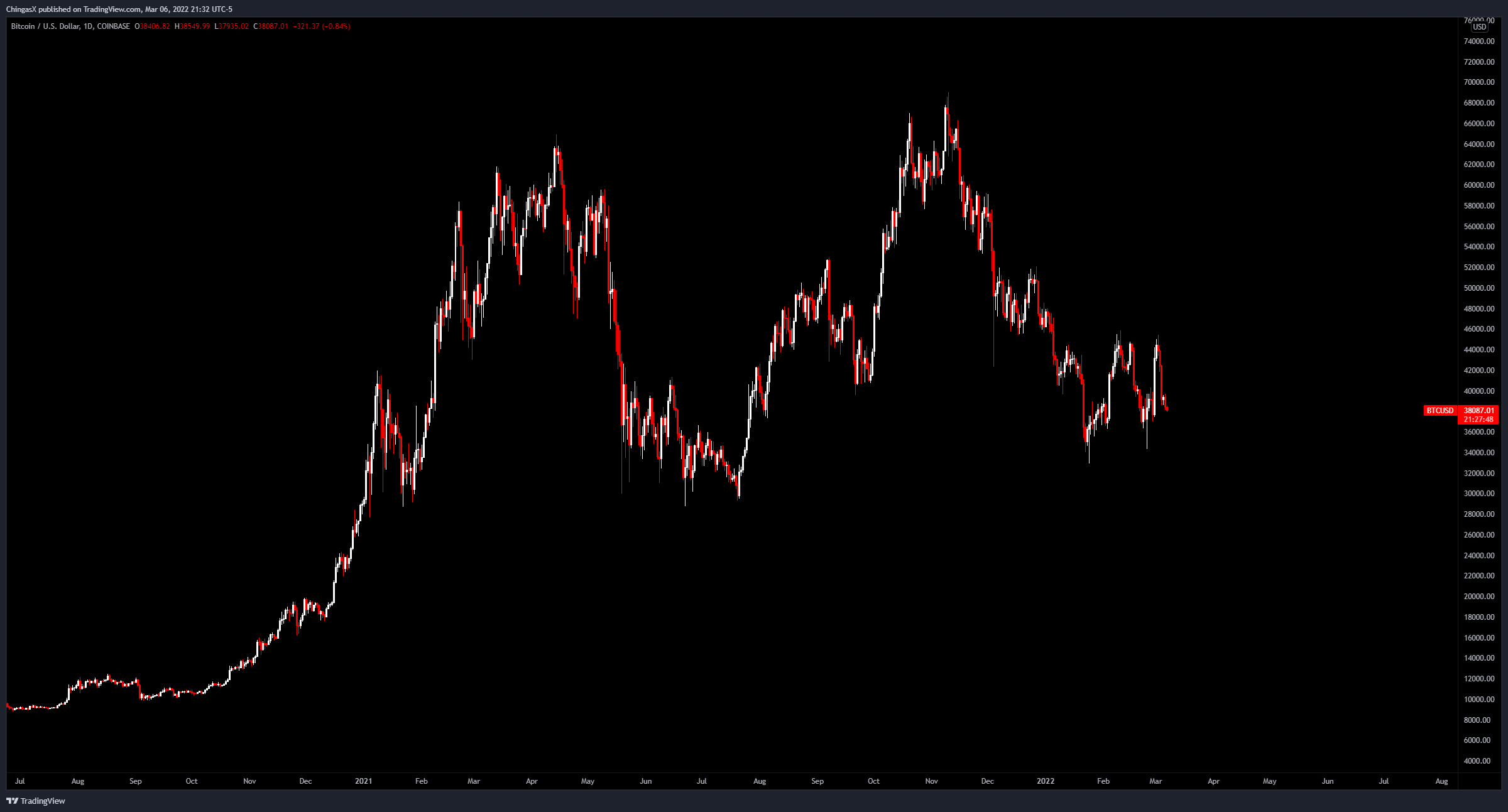 Well… WAR.  That will likely take all the blame for Bitcoins price fluctuations.  I got to be honest, seems more coincidental than anything else.  People have been selling Bitcoin for the last few months, a war between Russia and Ukraine, potentially the very beginning of WWIII and the potential for a nuclear apocalypses wiping every human being on the planet out of existence would do a little bit more than just Bitcoin being Bitcoin and continuing the path it began in early November.  People always want to blame price action on something as opposed to just looking at the chart.  It’s very strange.

The Downtrend is being challenged at this very moment.  The Swing Lows are Higher in succession but the Swing Highs are lower instead of trending Higher.  This means we are consolidating between a Resistance level and a Support level.  These are the lines in the Symmetrical Triangle that you can see on the Daily Chart.  Expect to see some more back and forth and potentially some false breakouts.  The real concern hear is forming a Symmetrical and then breaking to the downside.  That then leads the charge to a Massive Selloff.  You lose the macro trend – get ready for people to say Bitcoin died again…