Although this recap is mostly all about Bitcoin, it’s still important to discuss the overall health of the Top 5 as numbers 2-5 do have sway in the altcoin world.  All Long-Term trends are down across the board and by Long-Term, in this case, we are speaking to the Daily Trend from the PAS.  Very Short-Term trends are heavily downward trending but there is some small hope for BTC and XRP in regards to their respective H4 and H6 trends.

Long-Term Monthly outlook on Bitcoin is still a bit concerning.  Overall trend is still up because the last major High was higher than the one before and the last major low was indeed higher than the last but we are so close to either a double bottom or a complete breakdown of previous support.  If and when that happens then the Long-Term trend would officially be dead and it would be trying to transition into a downtrend.  As of right now, Bitcoin is doing everything it can to maintain action of the previous major low. 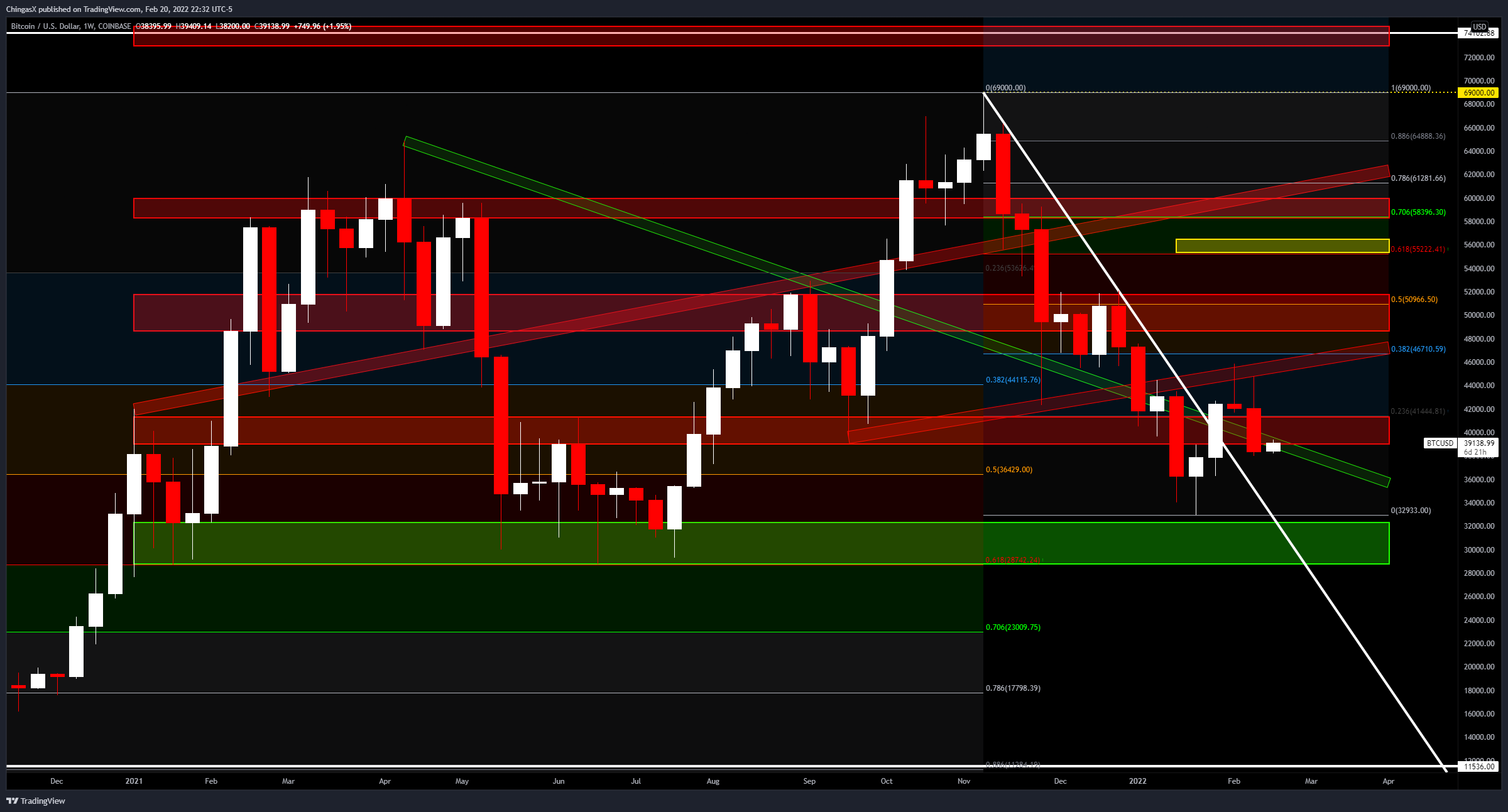 Last Week was another failure on the backtest of the internal trendline.  That is actually the opportunity to Short Bitcoin as Support broke, it flipped and then had the confirmation that it was indeed resistance moving forward.  That is not to say it’s etched in stone but Weekly S/R has stepped up and told us the resistance is too strong at the moment.

The $40K Support Zone was breached last week as Bitcoin fell $3685 and closed below Support.  This now turn that Zone into a Resistance Zone and one that we will keep a close eye on over the next few days.  The next Support level of major importance is around $32K. 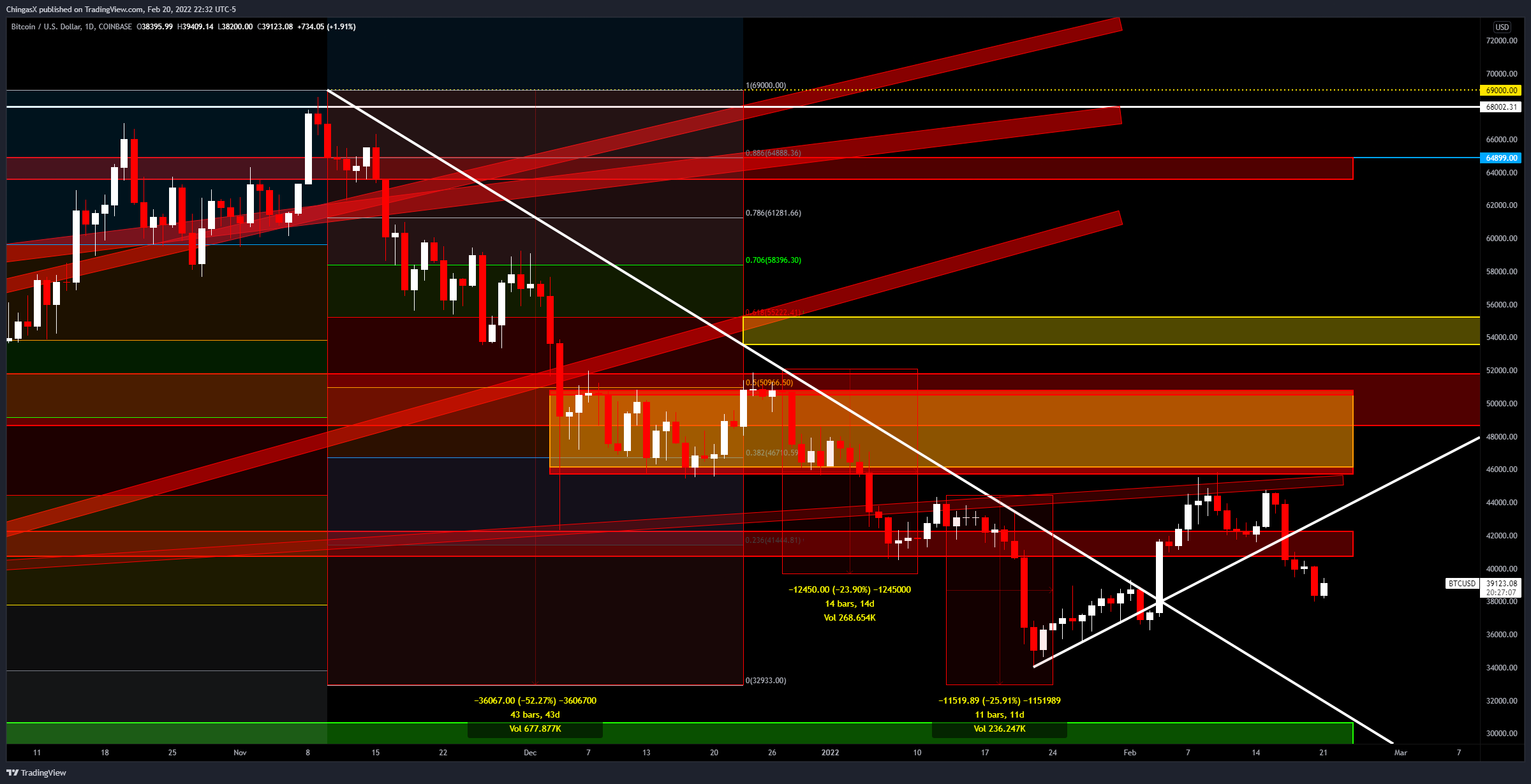 As far as the Daily is concerned, Bitcoin is holding at the moment the local 618 Fib from the recent low at $34,017 and the recent High at $45,855.  This local level unfortunately does not have much confluence a whole lot.  Recent price action on the initial leg can be considered Horizontal Support but its a bit of a mess.  It does line up decent with the 618 and we all know how much Bitcoin loves the 618.

The larger Daily trend is obviously down but we have nearly a month of what could be considered a potential reversal.  We would like to see this upward action coupled with a lot of Volume but that is simply not the case.

The rejection on the bottom side of the previous Range is another feather in the cap for the Bears.  A drop below $34K would likely mean we will see $32K without question.

Volume is taking a sharp turn downward.  Now, this could mean two things.  First – trending downward volume regardless of price action indicates there is little interest in this asset – buying or selling.  Lower Volume with trending action tells you that the current trend is potentially exhausting as all of those who sold have finally started to run out of assets to sell.  The second option allows for some hope of a relief rally.

Dominance continues to rise. The Lower Support was sloppy at best but held on three major occurrences.  The second level of Support was resistance for a long time before finally getting flipped recently.  Now we have a double retest of that Support and we can actually say Dominance in the very short-term trend is trending upward.

This could mean that Bitcoins price is increasing compared to Alts but we know that is not the case.  So, what we are seeing is the bleeding out of 10,000 different coins that are outpacing the selloff of Bitcoin.  This means Blood in the Streets but no way of telling if there is a lot more to go or not. 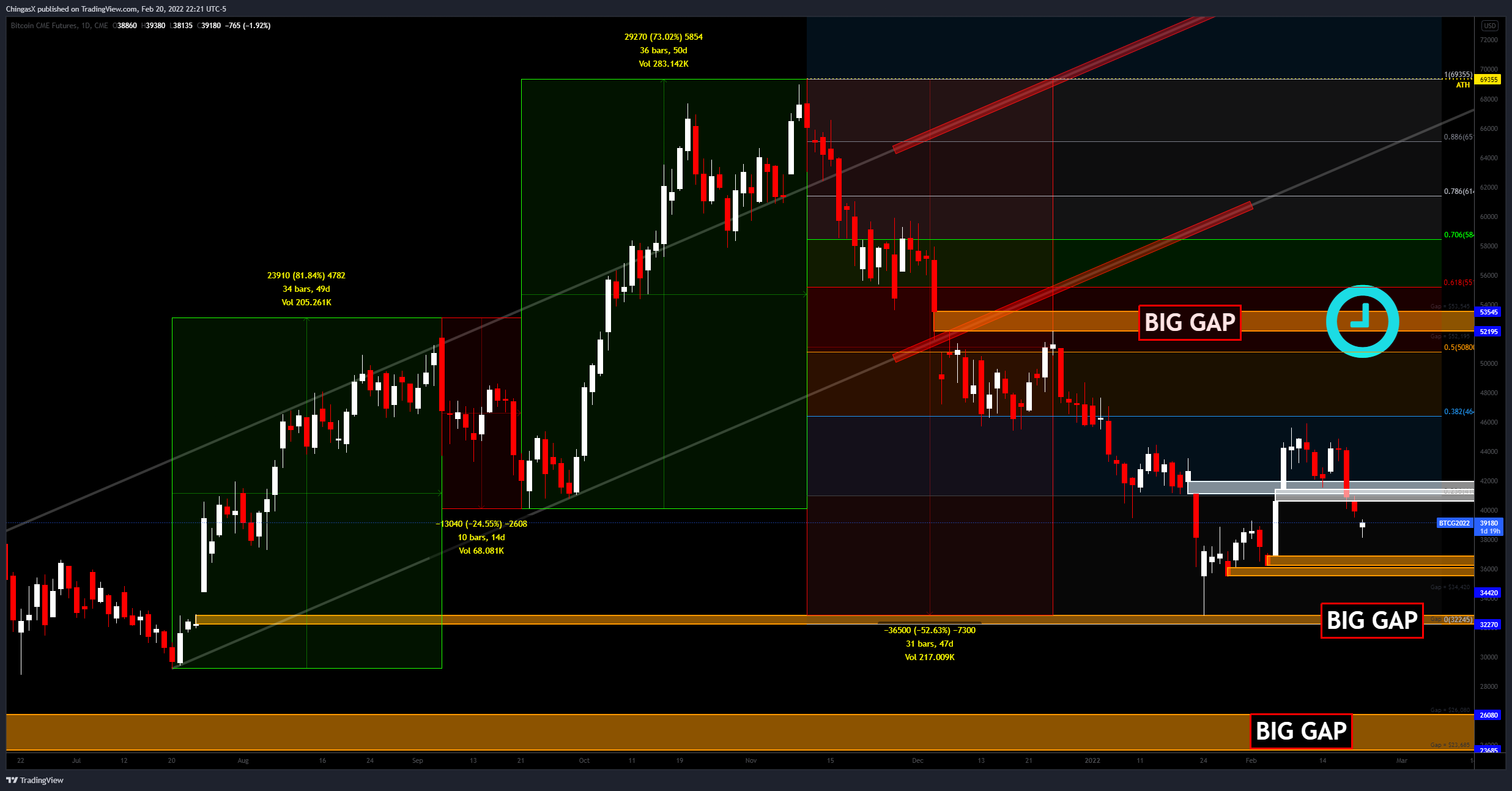 Futures did fill two fairly aggressive local Gaps in the last few days.  You can see them in White on the chart.  These lower gaps seem to be a target for sure.  Bitcoin was headed down towards them when CME opened around 6PM EST Sunday Night but has since corrected itself and is working with a positive candle at the moment.  We still have one major Gap up top and that is the ideal target for a relief rally. 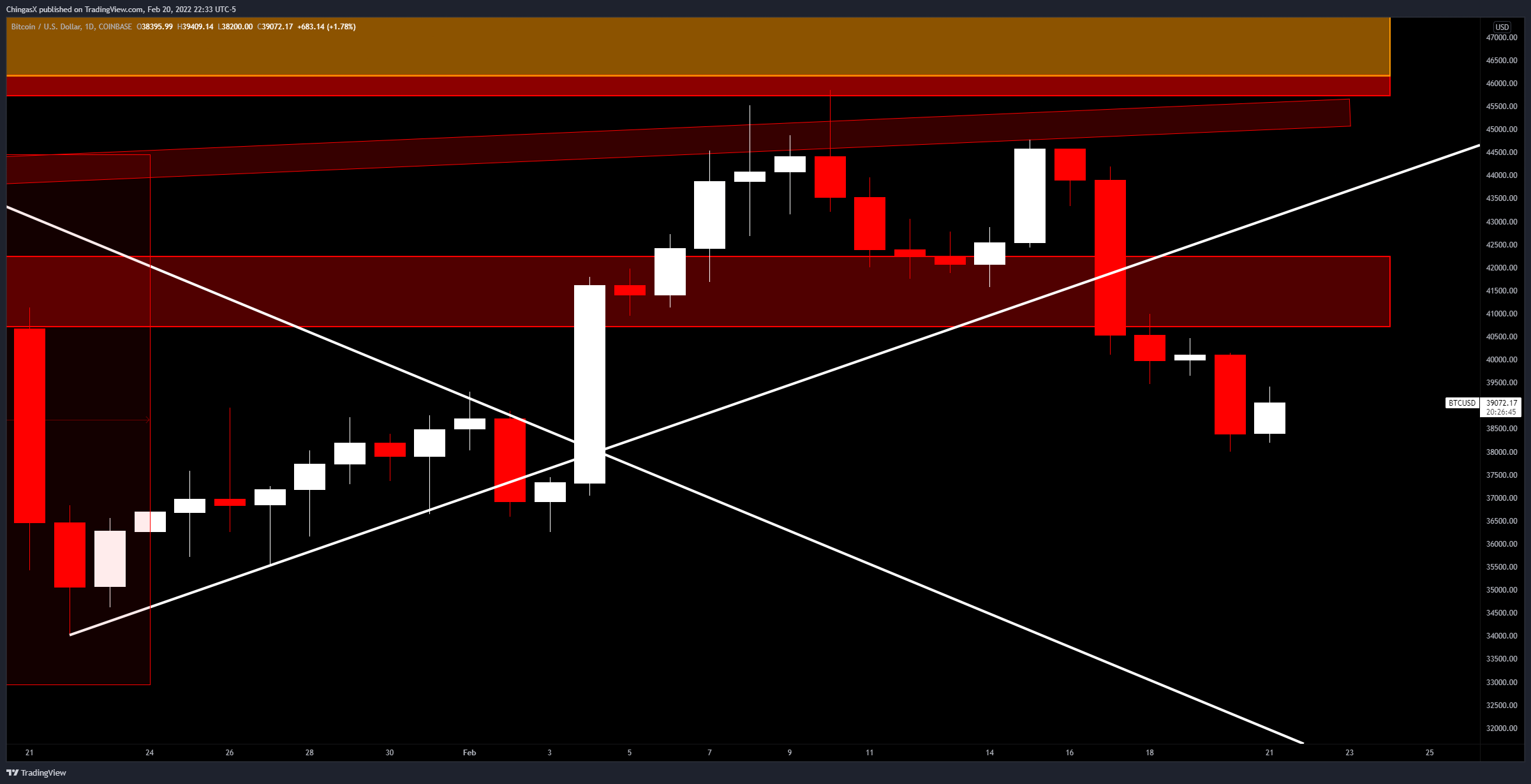 Most people hate a downward market.  Yes, money can be made but its not as fun making money on Shorts as it is on Longs, not to mention that shorting the market is not available to Americans.  The Market right now is ugly.  There is always a handful of coins that will go against the market and seemingly pump for no reason.  Those could just be whale games or more often than not, just pump and dump groups bored of the market and making a splash wherever they can.

The overall health of Crypto was never effected by World Events, News or anything else that the rest of the world cared about.  One consideration that can be made is that now that there are some “Investors” or Banker types of people into the Crypto world, these things that used to never affect Crypto may indeed start to affect Crypto.  In that regard, it’s a lose lose for everyone.  This will likely be the case as Crypto matures and naturally broadens its exposure.  The sad reality is that you have the ability to take a market built for the people and destroy it like every other existing market.  Let’s hope this is not the case but it is certainly something to consider.