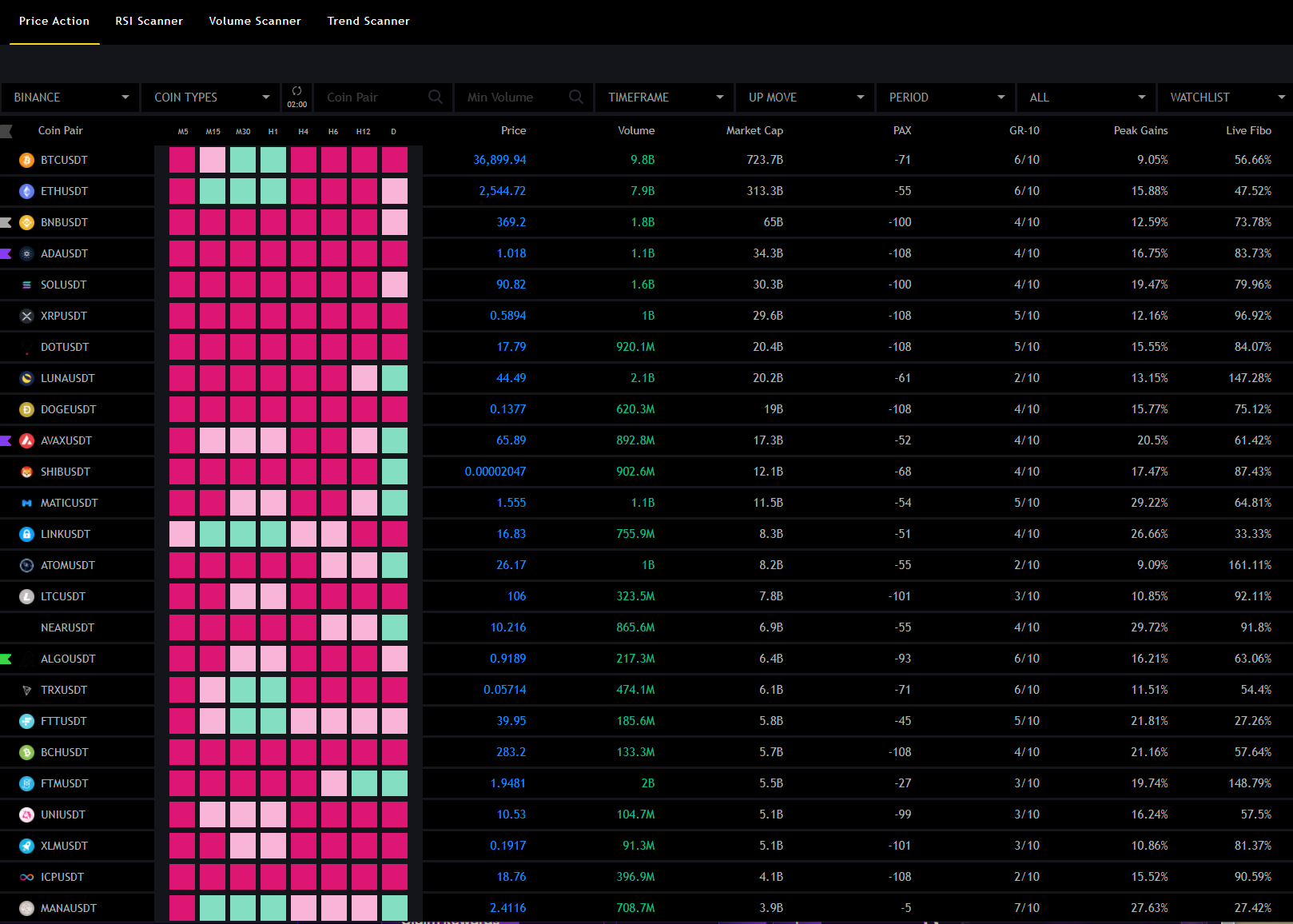 There is always so little to say during a Down Market.  People are usually frustrated and short with their attitudes.  Even Bullish news is usually shrugged off as “it’s another scam” or “that’s just a ponzi”.  Groups divide, people get divorced, people leave Telegram and Discord groups and all of a sudden there are less videos on YouTube that bear the mark of some influencer making a weird face with a flashy – click baity title in the background.  For a lot of us, this ain’t our first rodeo, so we are well prepared for what is happening and what can potentially come.  For others, they couldn’t be more lost.

Even with all that said, Bitcoin did actually have a positive week.  A gain of over $1600 was posted when the Weekly Candle closed.  That is unfortunately not a gain of the $6821 that Bitcoin would have needed to break even from the loss the week prior but what is more important is the bounce.
The bounce came at $32,933.  This level is just a front run level to the upcoming Support Zone we have talked about.

Some newer Alts with shallow history were making moves last week as well.  PEOPLE, FRONT, JOE and SPELL made some serious Peak moves but SPELL and FRONT also made some serious moves down.  SPELL in particular had a lot of attention as the project lead for SPELL is the same for Wonderland TIME and MIM.  We won’t get into it but it was one hell of a week in Crypto.

ETH remains heavily correlated to both BTC and LTC.  This correlation is consistent with years prior when BTC, ETH and LTC were the unshakeable Top 3 Crypto in the entire market.  BTC and ETH have kept their places in the rankings but LTC has dropped all the way down to 22nd when coupled with stablecoins.  That is pretty remarkable.

Last Week we saw 13.  We even saw as low as 11.  Even today when we were down $1000 almost immediately after starting the week, we remain fairly high, all things considered.  There is a sense of relief in the air as those who paperhanded their position and sold the low are started to feel a little silly for doing so.  We will find out during the week if the rise in Greed will be short lived or not. 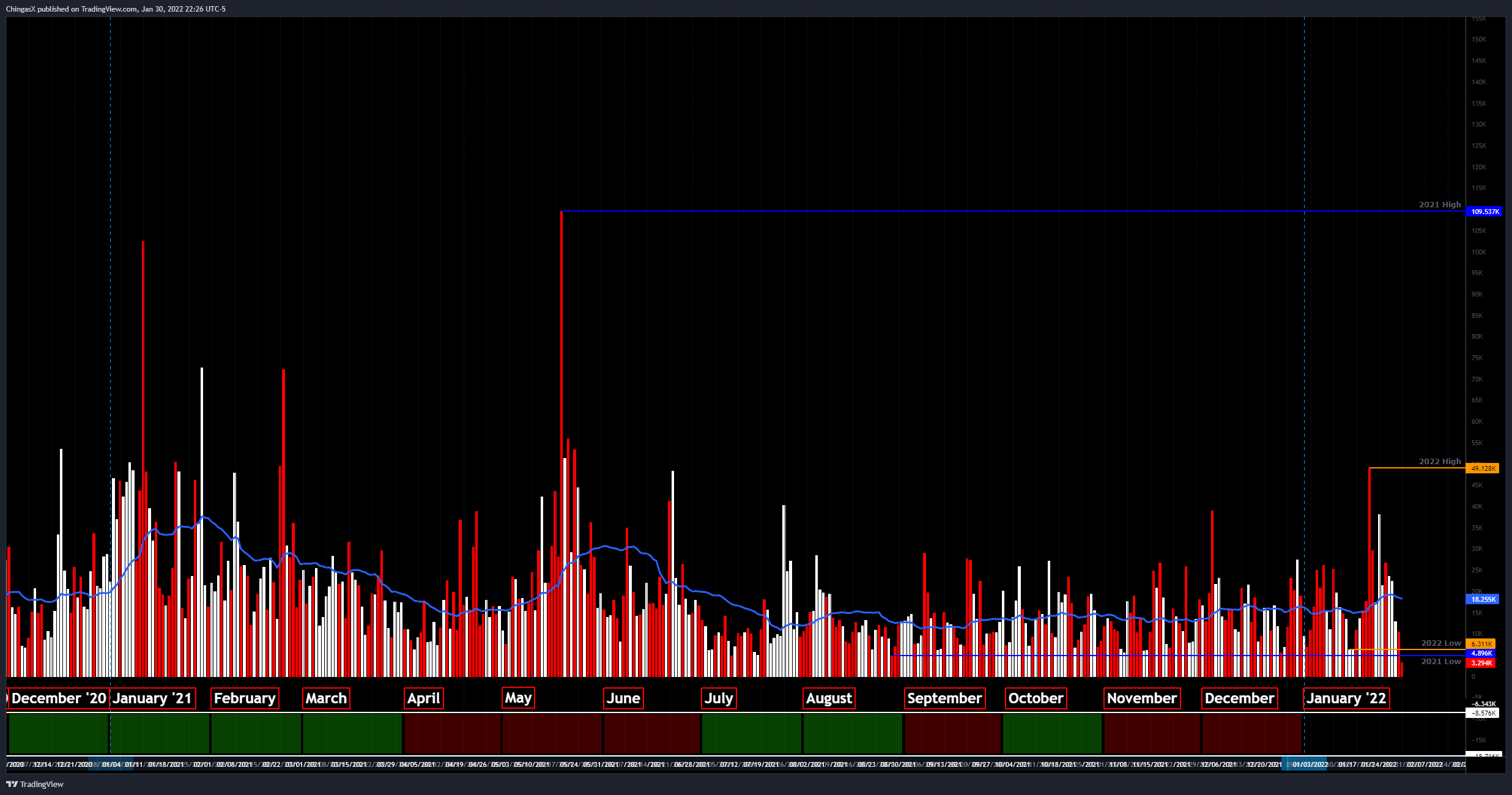 Bitcoin saw some impressive volume during the buyback wick but that was two weeks ago now.  Last week was slightly heavier than we have been used to but still not much above average as a whole.  The 30-Day average that saw it’s first major bump in months is starting to curl back in an effort to give it all back and call the last few weeks just an anomaly as opposed to a potential trend. 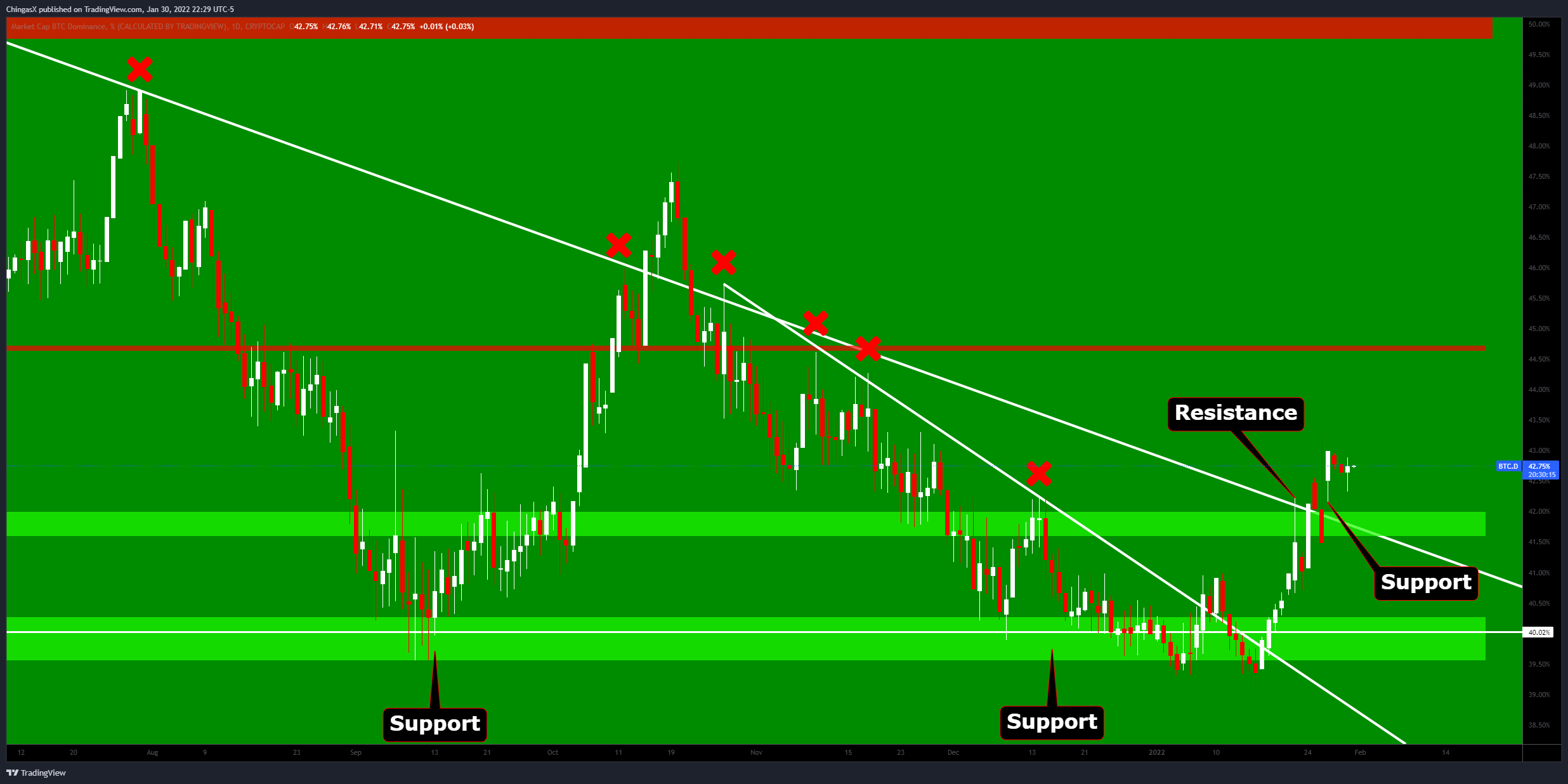 The most Significant news in Bitcoin Dominance in many, many months.  Bitcoin Dominance finally solidified that the 40 Level was Support.  Not only that, Bitcoin Dominance went ahead and Broke the long-term downward sloping resistance trend AND the 42 Level last week.  This rise in Dominance is not reflective in Bitcoins price but rather the dumping of Altcoins across the entire market.  Now we look to see if 42 will hold and if/when 45 gets tested. 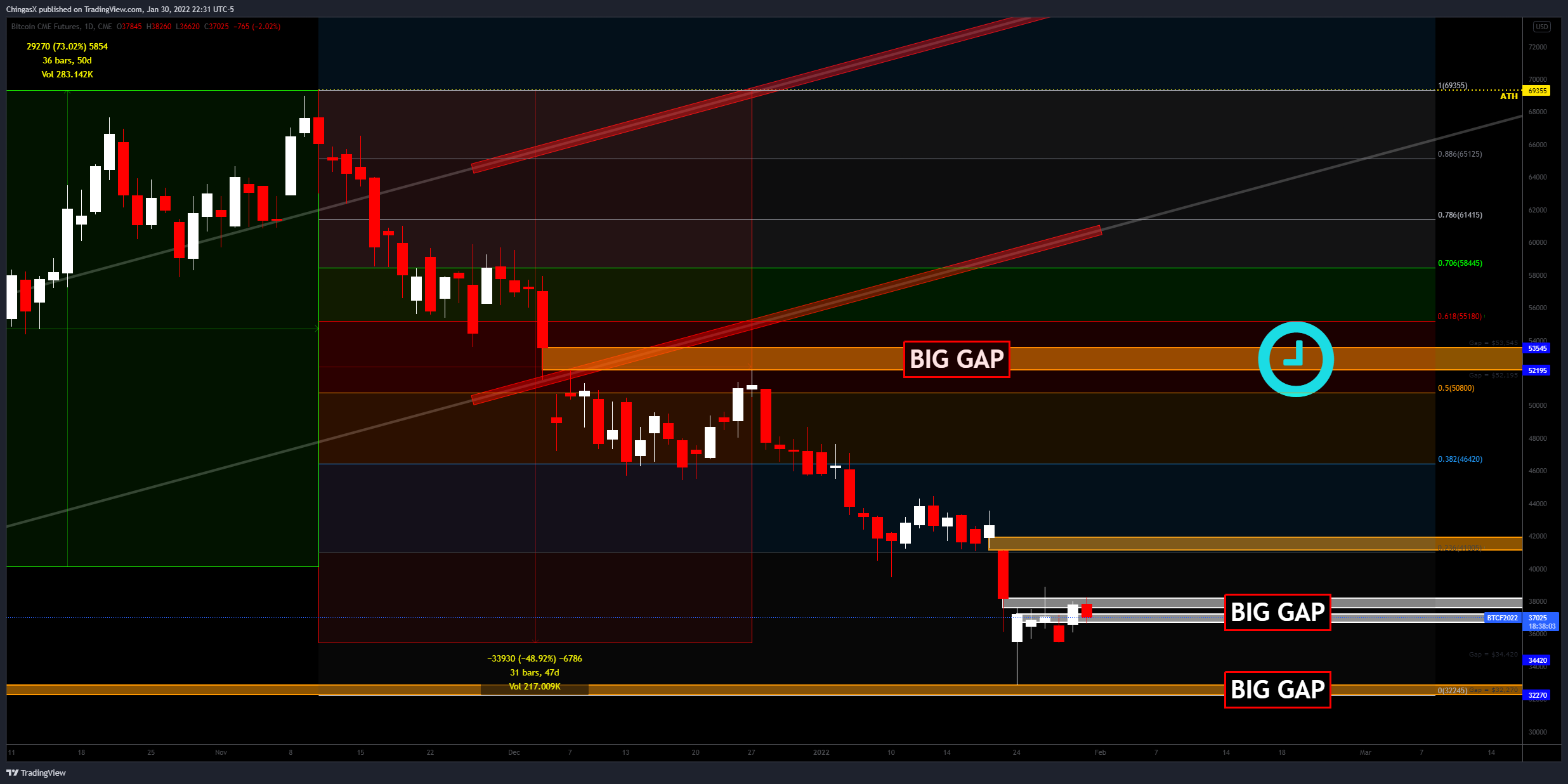 Last week was very exciting for Dominance but it was also very exciting for the CME Futures Gap Chart.  There were two relatively large Gaps created and filled in-between $36-38K.  Yes, we are still waiting for $53,545 to get filled but we have all the time in the world.

What was also shocking was the lower Gap at $32,270 was not completely filled.  That gap started up over $34,400 and came so close to filling the entire lower gap in on candle but just barely missed.  This unfortunately means we will likely come back to finish the job.  There are many more gaps lower than $32,270 but there is no reason to fill those just yet. 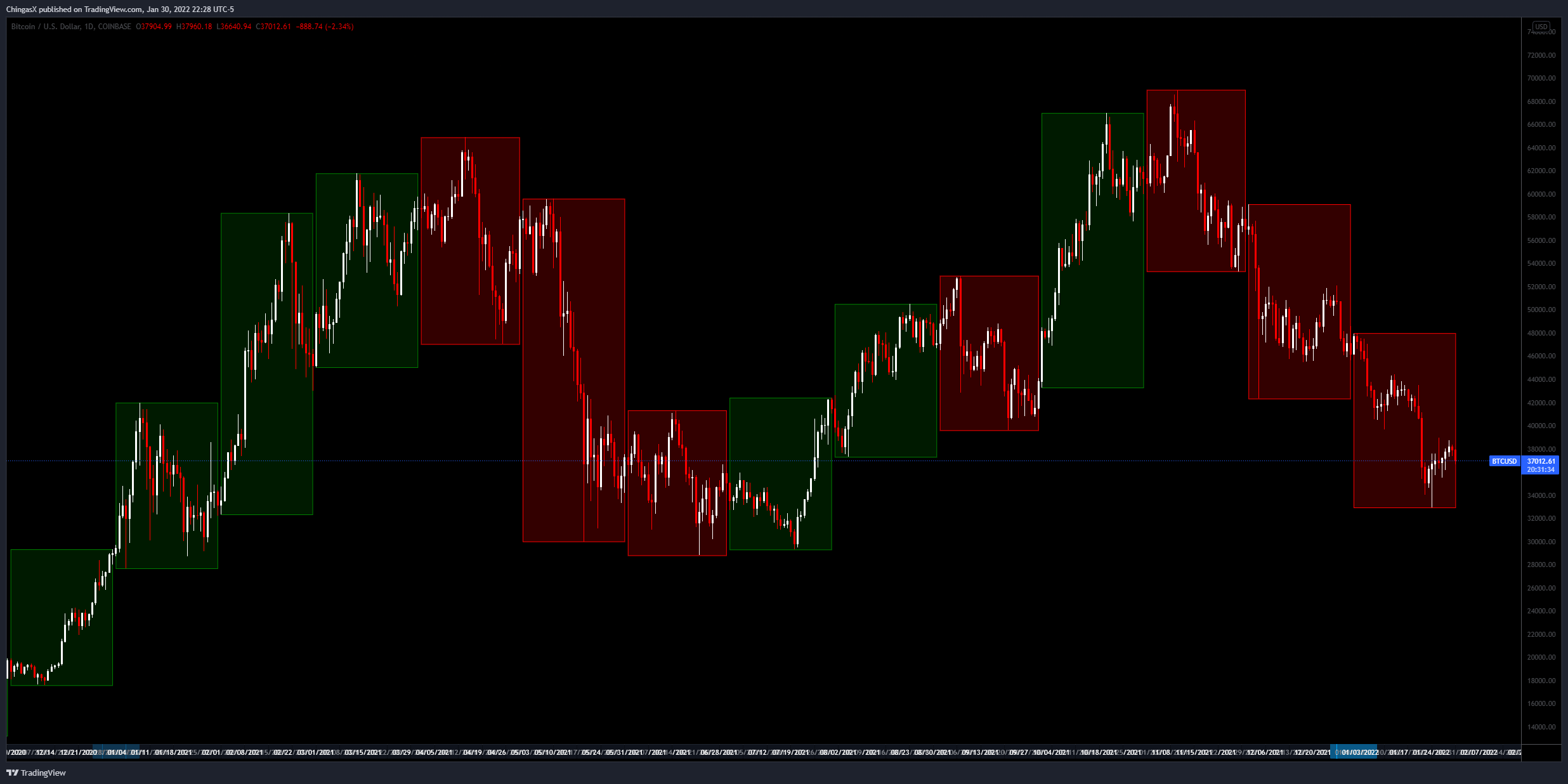 What can we say.  The monthly looks bad.  The good news is that we have not broken the prior low, so we are still technically trending upward.  The other good news is that we are likely to close tomorrow candle below the January 1st open and that would indeed solidify the third negative month in a row for Bitcoin.  In similar fashion, on the previous leg, this was also the last red month before a new leg was born. 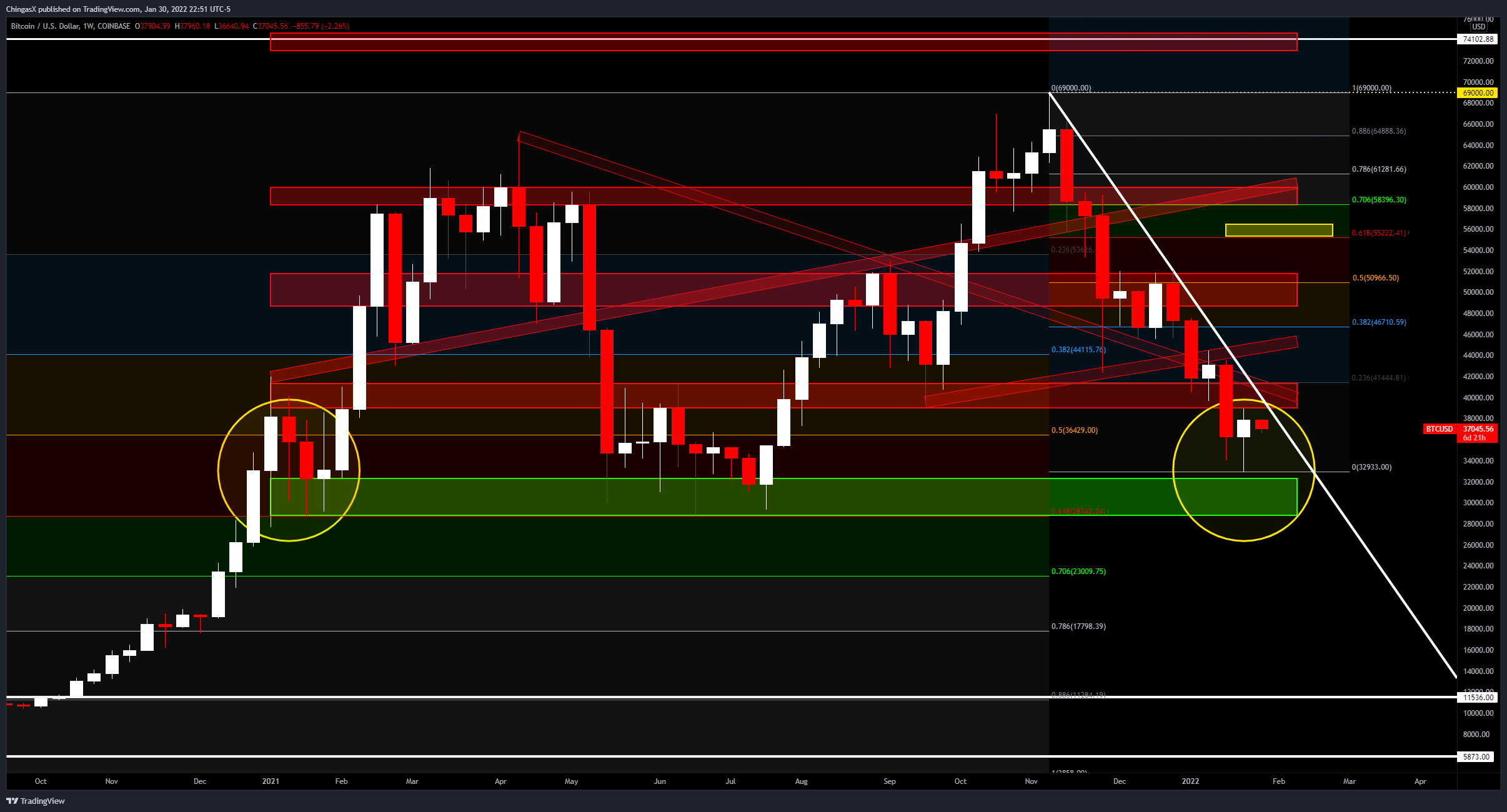 Yes, the weekly chart is very red.  This is because we have lost or broke every level of Support from $69,000 all the way down to $32,000.  Good News – if you played the Free Position at $34,500 then you got your entry.  The Bad News, Bitcoin is doing that thing again where it just tires everyone out and makes them cranky.  Every pump is a fake out and every drop is worse than the drop before it.

Last week showed the first tiny bit of promise since the Support at $42,000.  Shocking to think the next level of Support was a calculated $10,000 drop from prior Support.  Yet, here we are.  We continue to look to the Zone from $32,300 – $28,800 or simply the $32-29K Zone.  This area was front run the other day when the drop to $32,933 happened.  What that means is that someone had a big enough buy order in front of Support that it absorbed every single seller until the sellers ran out of steam.

Until $32-$29K breaks, then we have support and we have an uptrend.  We do still like the $50-55K area as a relief bounce but it is certainly possible we remain sideways for months.  Last time we were in this zone we were here for 10 Weeks from May 17th to July 19th.  Although we will never get an exact replica of prior price action, there is reason to believe that this level of Support can hold for quite some time. 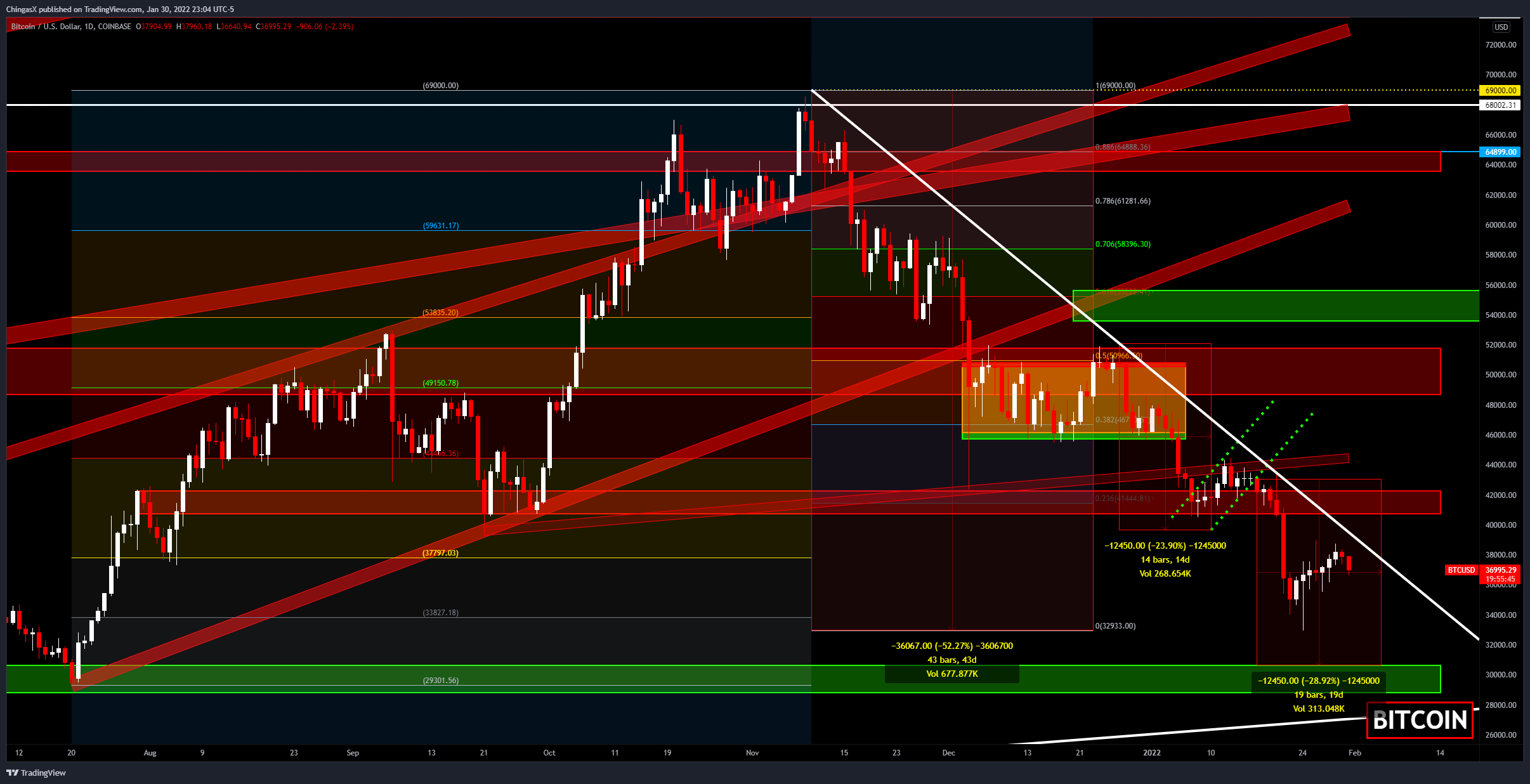 Daily Bitcoin is currently playing out its Bear Flag Pattern discussed last week.  Unfortunately, in the process Bitcoin is in the middle of printing yet another Bear Flag in the same series.  This next Pattern can be an additional 25% drop from the Support of the Pattern.  This would have a target for Bitcoin at around $27,700 and would put Bitcoin just above the long-term trendline started back in March of 2020.  Of course, it’s too early to tell as today the support is breaking but the candle is far from closed and we all know anything can happen in the market in the same time it takes you to utter the word NO!

Now, outside of today, Bitcoin has very slowly been trying to crawl back to $40,700.  Six of the last eight days have closed higher than their open but they are all weak and ugly candles.  We have yet to see any real candles that are worth talking about.

Tomorrow we close out January and we say goodnight to the first month of trading in 2022, which has proved to be an overall crappy month and year for almost everyone I know.  If that sentiment has any reflection and can be extrapolated over the global trading community then I can say with certainly that EVERYONE is looking forward for February to be a better month than January.  As always… Time will Tell.