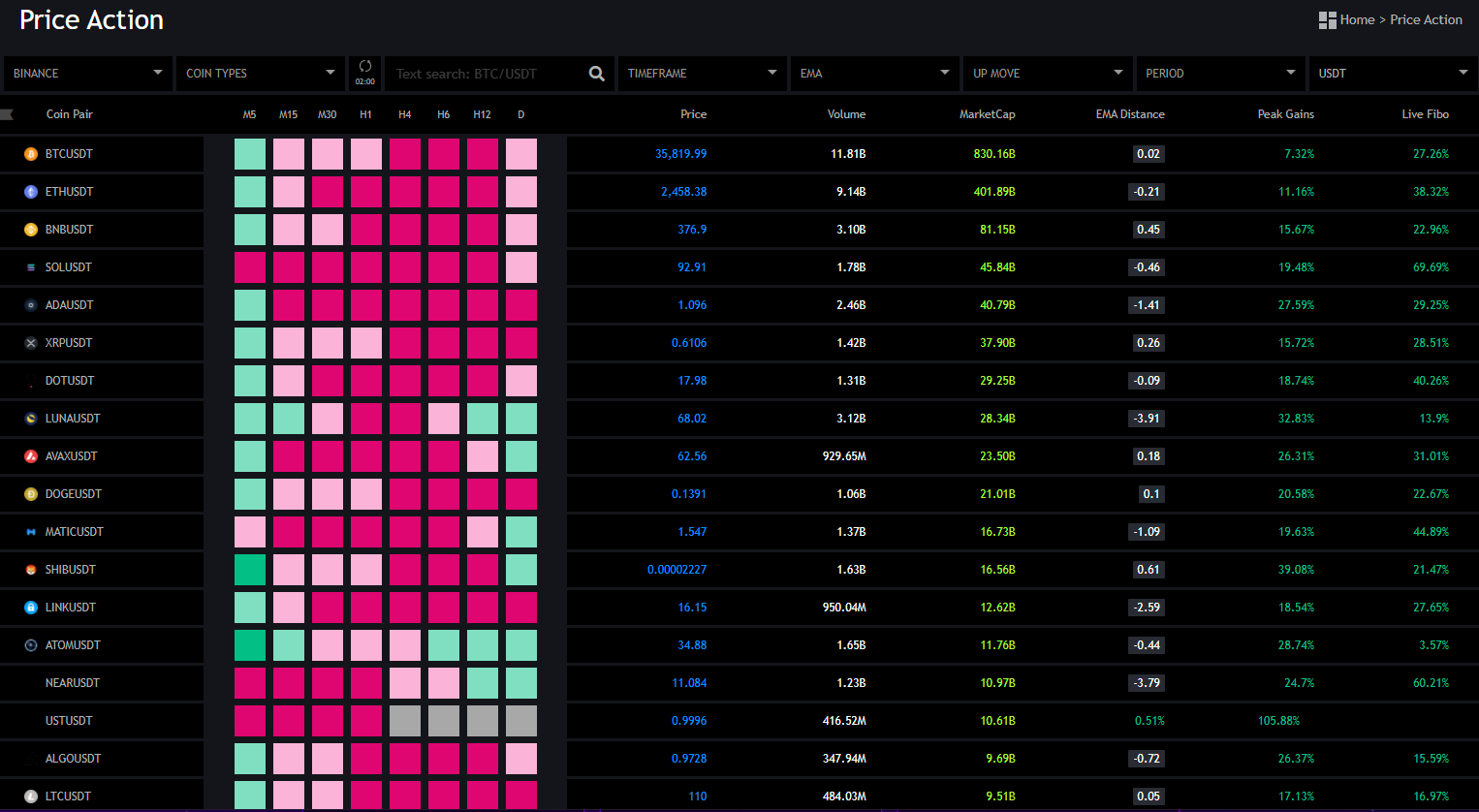 Well, well, well.  Here we are again.  Bitcoin reached $34,500 which means the opportunity of a “Free Position” has come for all those who played the trade.  The volatility is heavy, the volume is heavy and the bleeding is, well, HEAVY.  Last week brought us a near $10K peak drop in Bitcoin which worked out to be about a 21% move to the downside.  The real sadness is that because of one coin and one coin only, the rest of the market completely tanked.  Ah, such is life.

KP3R pushed for 100% two weeks ago.  Last week, it traded below the previous move marked a 100% loss of all of the prior weeks gains.  That drop amounted to a 60% total drop in value in a week.  New Coins and Shitcoins took a majority of the violent rise and fall of last week.  All things considered, the market faired much better than recent years given similar circumstances.   As you will soon see, the FEAR is getting Extreme.

There are only two 0.90+ on the board and they are BTC-ETH at 0.93 and ETH-LINK at 0.91.  LINK-BTC is sitting at 0.88, so it;s close but not perfect.  Certainly a lot of positive correlation when it comes to dump time but the real difference in these situations is who dumps further and how fast do they recover.

Today we land at 13 – Extreme Fear.  Yesterday we hit 11.  11 is half of the 22 that we were at last week.  The FEAR is real and it is consuming traders left and right.  There’s nothing like 2Xing your account one week and then losing it all a week later.  This happens all the time unfortunately.

Something interesting on the Yearly F&G Index.  On January 8th, 2022 we hit the low at 10.  Looking back a year, the lowest low has always been 10.  Yesterday was 11.  There is certainly a chance we mellow out for a little while before another major move to the downside. 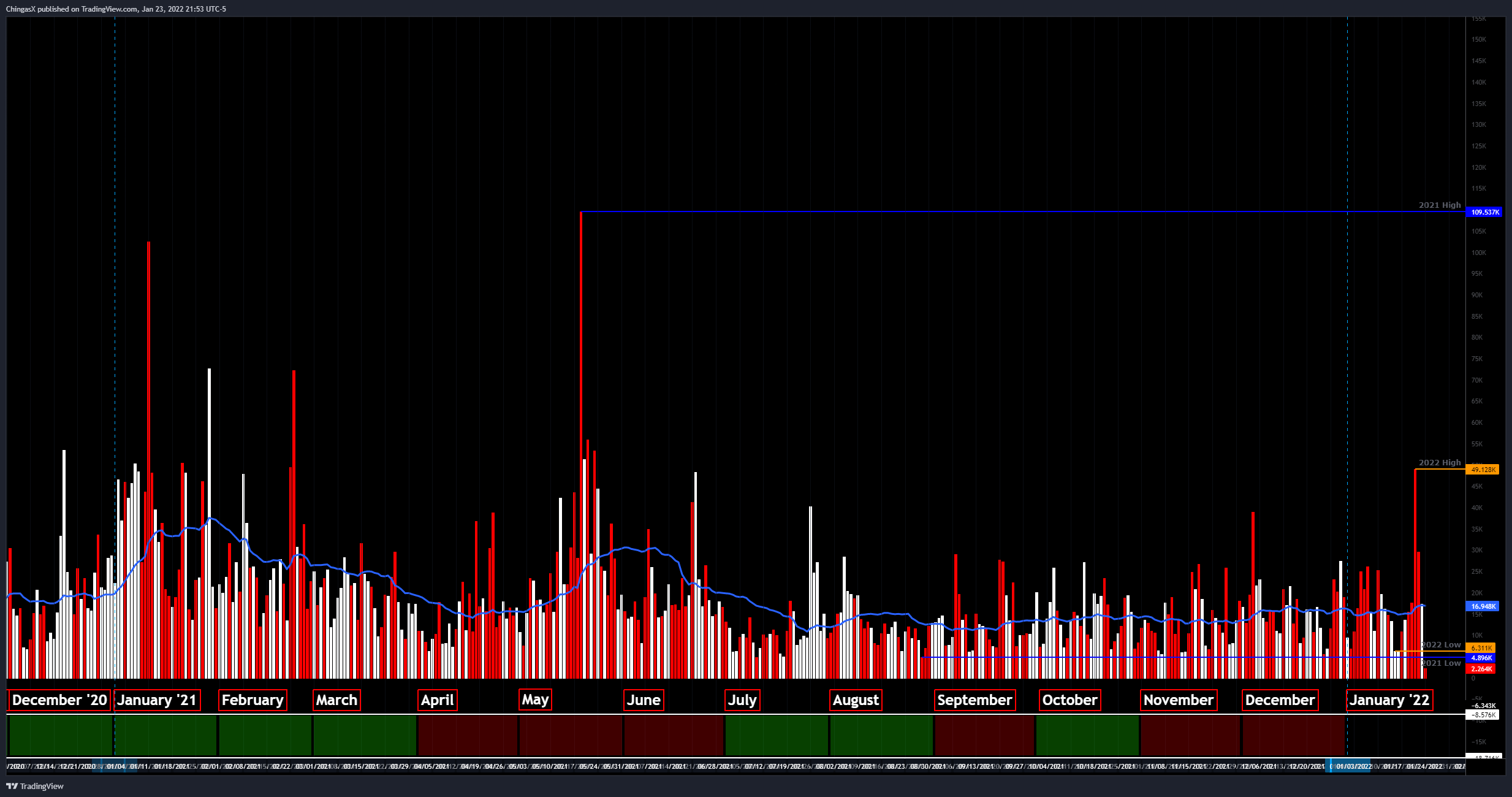 The Sell Pressure is high my friends.  Not that it was a tough level to beat but Bitcoin has put in a new 2022 Record Volume.  Of course it was on the sell side,  We haven’t seen Volume like that since May of last year when Bitcoin dropped 53% from its new ATH at the time.  Yes, this situation is very similar and if we see a 53.77% drop like we did before then we would need to see Bitcoin around $31,900. 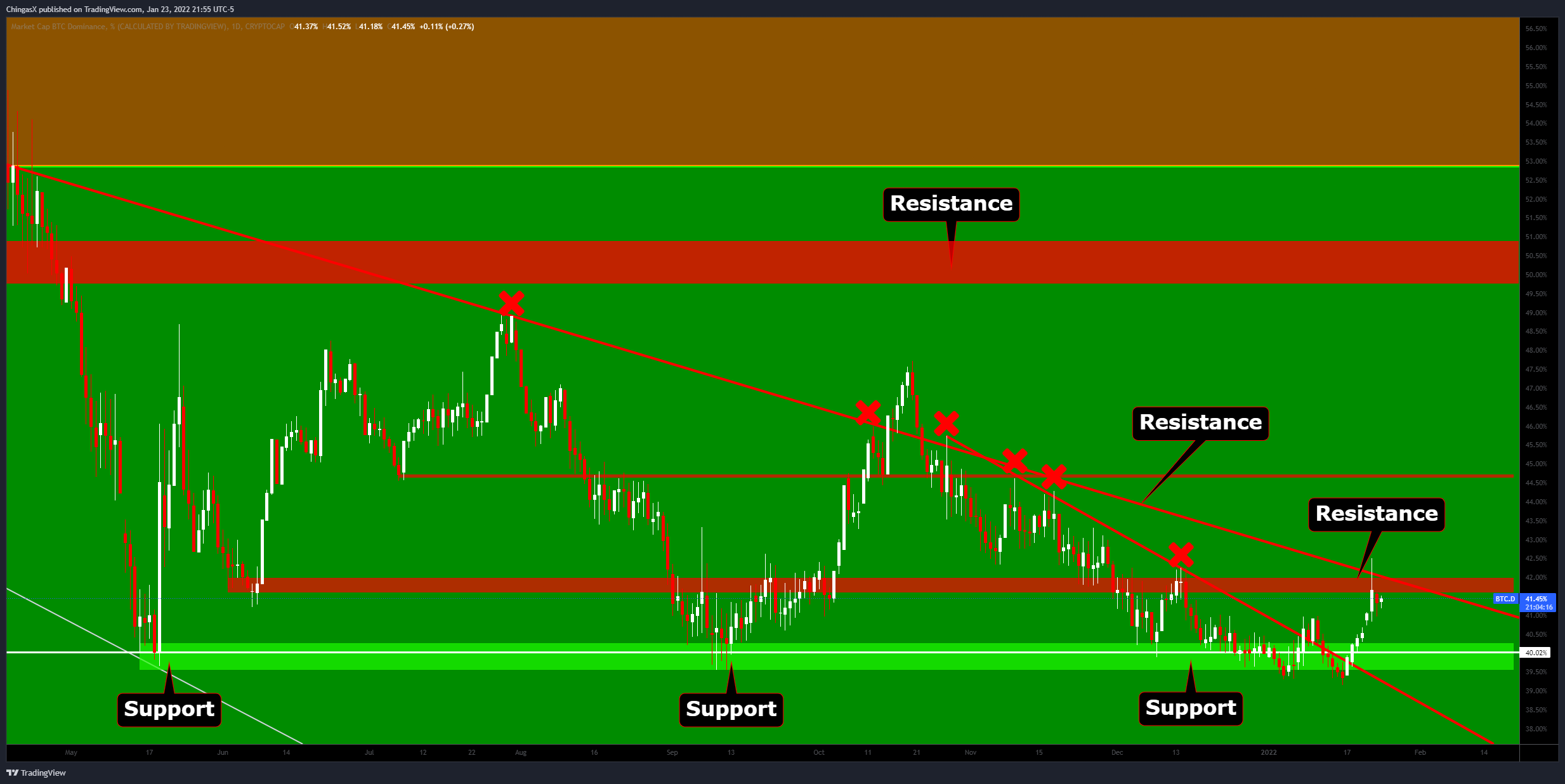 Well 40% finally held enough to push upward to the next level again.  Just as expected, Resistance was found at the initial touch of 42 – where the big red box is.  This time, 42 had confluence with one of the downward sloping resistance trendlines.  This added another layer of resistance and sure enough, Bitcoin Dominance was unable to break through at first.

Now we wait to see if all the paperhands left in the market dump their bags.  If they do then Bitcoin should surely soar past its resistance and start a journey back to 50% Dominance.  This does not mean the market reverses.  It just means that shaky investors got scared and sold off their Altcoins, further destroying the market as a whole and further increasing the Dominance of Bitcoins Market Cap. 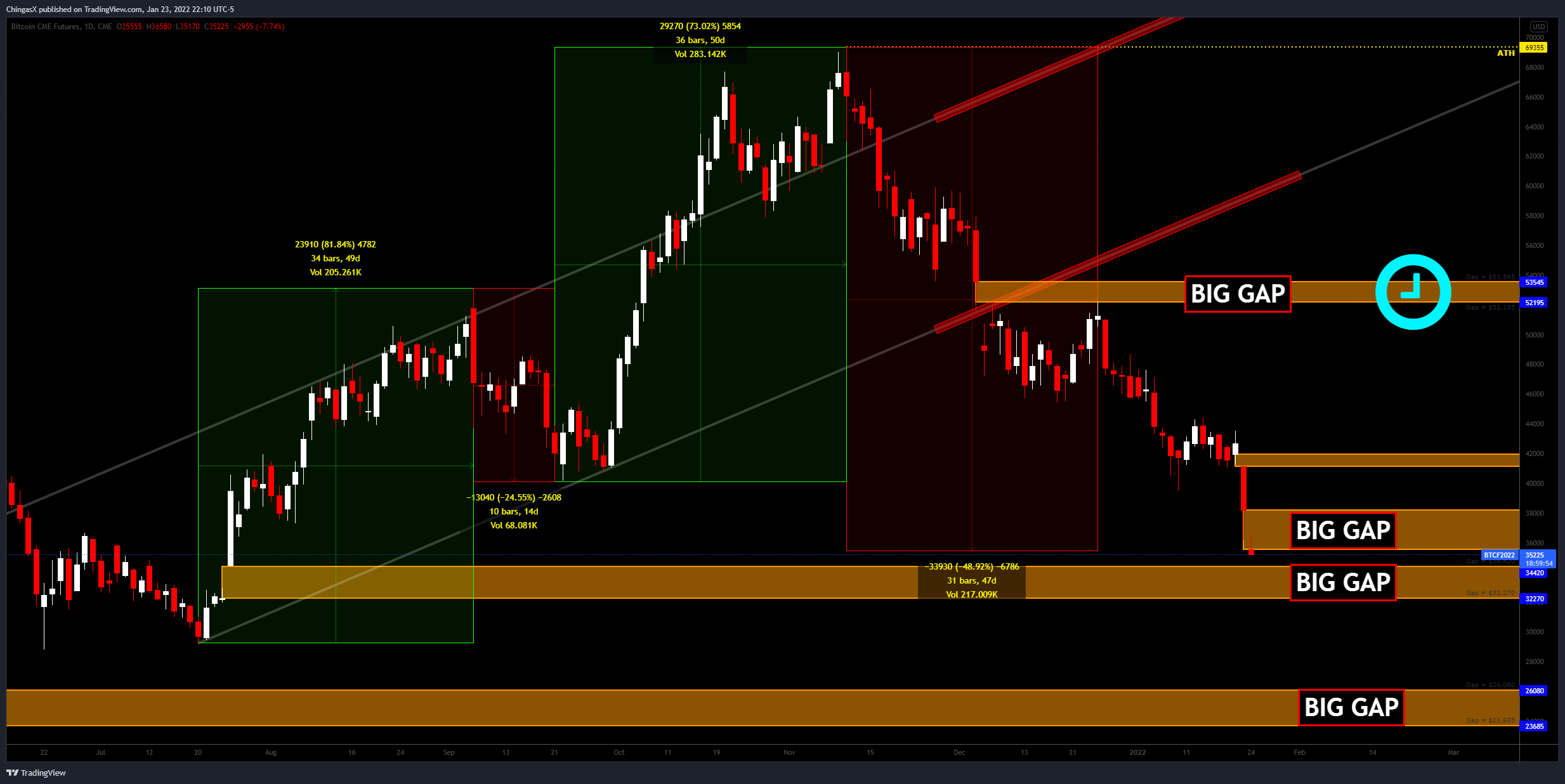 Gaps created and Gaps Filled.  That is the name of the game for those trading the CME Futures.  What you don’t see are the gaps that were filled over the last few weeks, one of which was another Huge Gap.  So, what’s the story here?  Well, we have a clear Gap at $32,270.  Given the market conditions, the current pressure on the sell side and the current momentum south, it seems like a no brainer to go ahead and fill that Gap.

Will this further destroy the market – Yes.  Do the whales give a shit?  Absolutely Not.  Honestly, they couldn’t care less.  Now, do we see $23,685?  Yes, eventually but the market is so oversold at the moment that we likely see a recovery bounce first before we start dipping our toes back into the $20K’s. 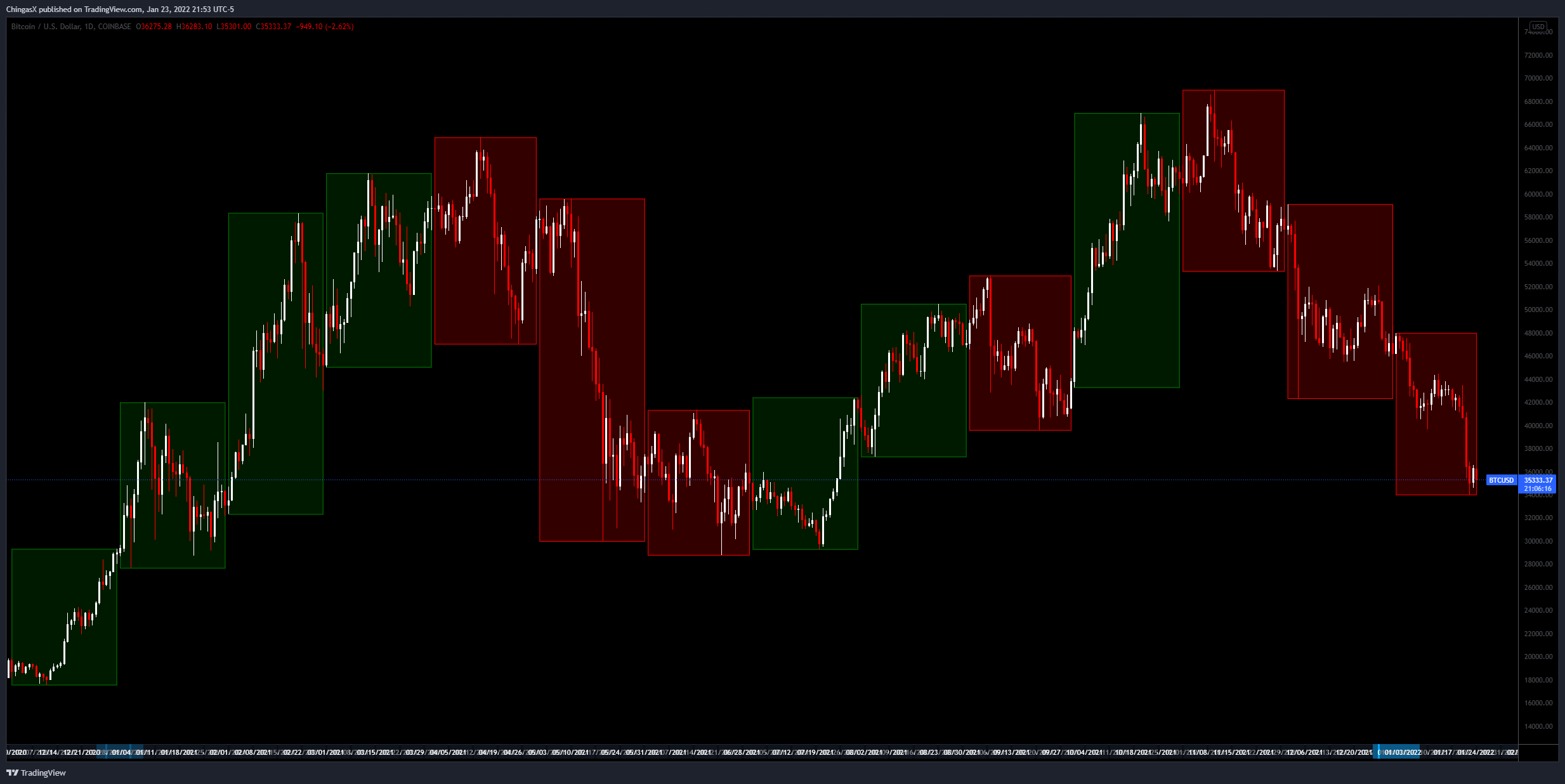 Is it ugly?  Yes indeed it is very ugly.  This Monthly Outer view broken into Daily Candles is one of my favorite ways to look at the market.  On one hand you have the Daily volatility that traders can lose focus on and get blinded by but on the other you just have Huge Monthly reminders of what the market is actually doing.

Bitcoin is on Month Three of its current Dumpfest. We are now trading at levels that were Brand New Price Discovery levels for Bitcoin a year ago.  Think about it this way – Last year, On January 8th, 2021 Bitcoin made a push to nearly $42,000 for the first time ever.  That was after 3 months of nearly going up the entire time.  Now, we are the exact opposite.  A full year later we are retesting those highs and potentially those lows and we have lost 50% from our most recent ATH. 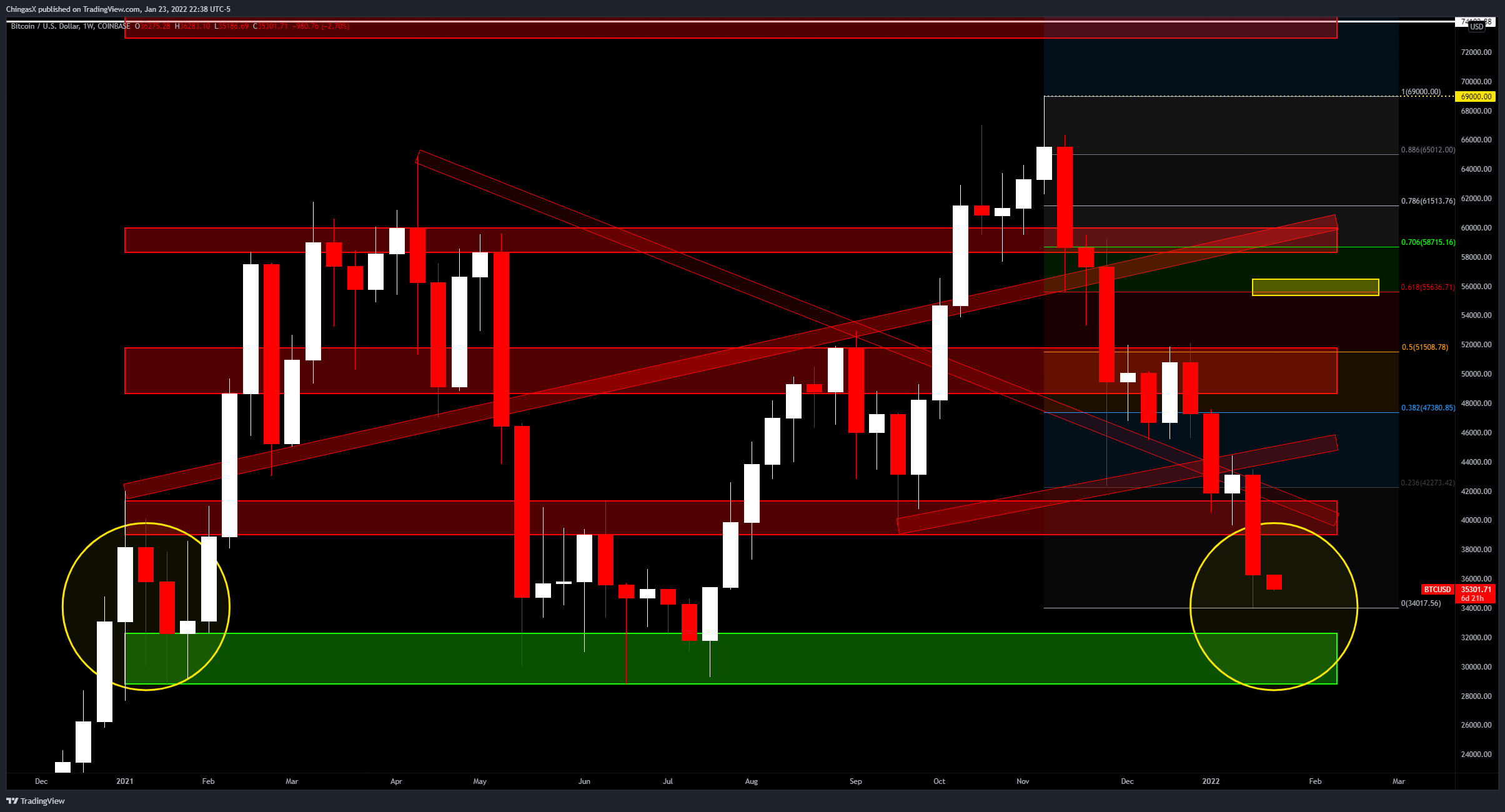 The Last Major local level of Support is here.  Bitcoin impressively lost almost $7K last week. The Support at $40-42K finally broke after a few weeks and of course, it broke violently.  A retest back to $42 is definitely in the cards but there is currently no reversal in sight as the Bears are 100% in control of this market at the moment.  They want to cause a cascade of liquidations to stroke their egos one more time it seems.

Massive Liquidations are set from $32,500 down to $30,000.  $31,000 seems to be ripe for the taking.  This essentially means that for anyone who went Long on decent leverage will be forced to to sell their position in order to cover for liquidations.  This is generally a simple task but when the volume is insane and all those orders are stuck it becomes more of a Black Swan Event than anything else.  If that happens – hang onto your hats because it will be very ugly. 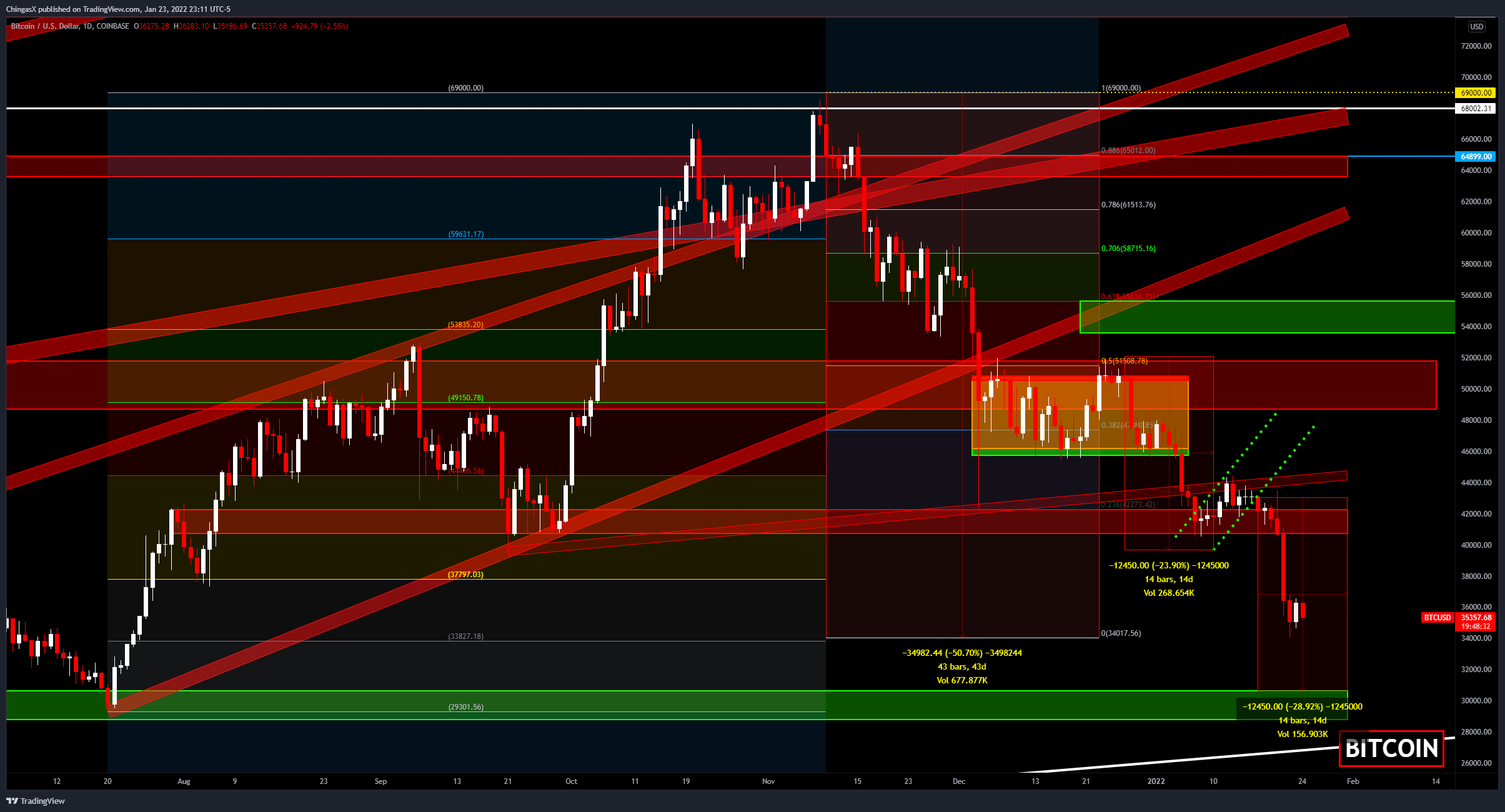 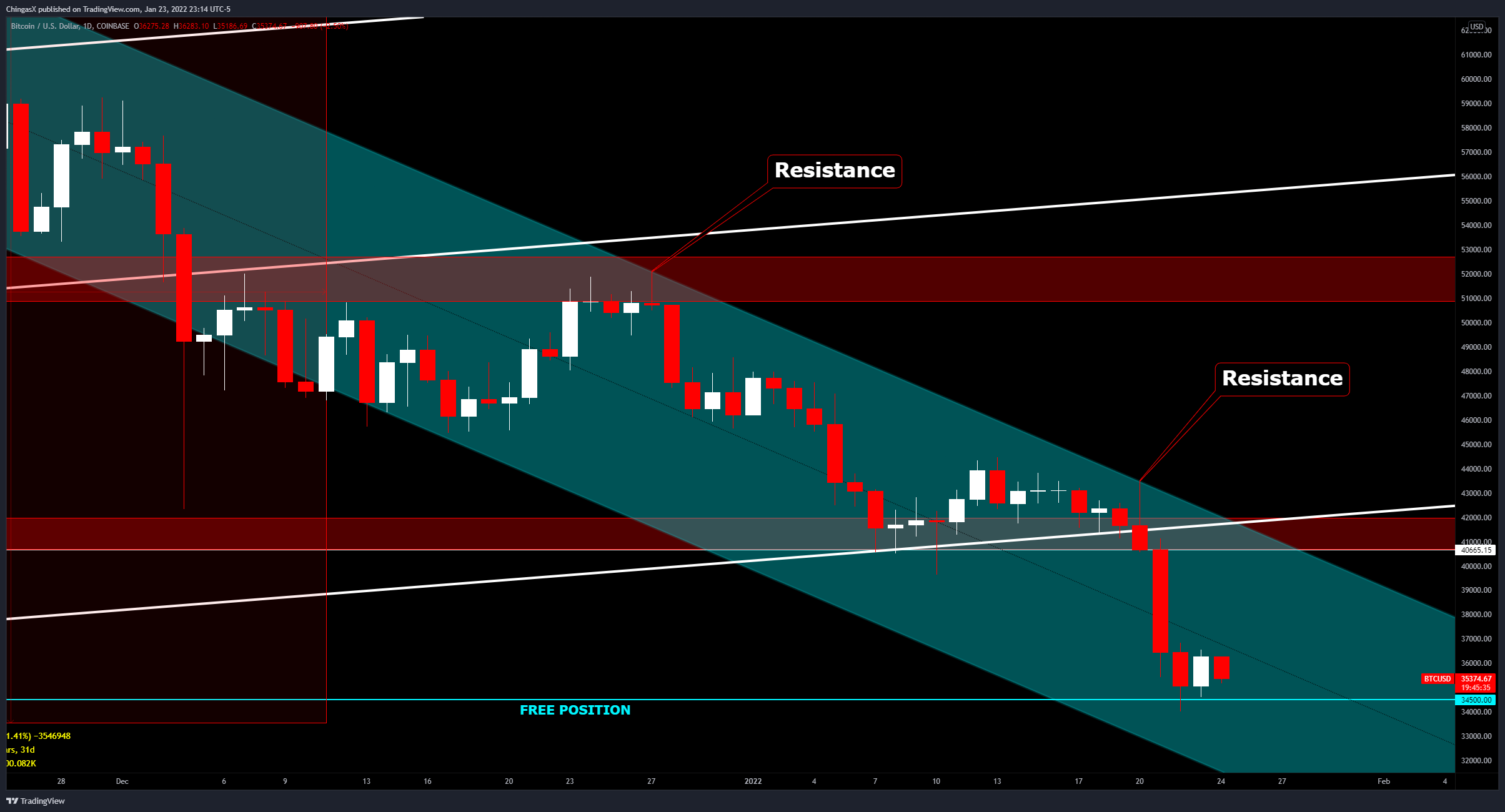 It appears that the Bear Flag we spoke about is indeed playing out.  This has a measured move target at $30,500 – basically the top side of the last major support zone coming up.

Bitcoin did also hit its $34,500 “Free Position” target that we talked about earlier and in a few previous articles.  The Free Position is for Investors who believe that we will eventually retest the high.  This allows them to go in at a 50% Discount and then take their original capital out of the position when we retest the high and everything that they are left with, is a Free Position.

There is nothing wrong with that trade but you have to have no leverage and be willing to hang on for a potential 99% loss.  Another trade is simply playing the 618 from the major Swing Low to the ATH.  This would land you almost perfectly on $28,800 which is the very Bottom of the same Support Zone that the Bear Flag wants to land on top of.  That makes $30,600 – $28,800 the ideal load up Zone for a potential bounce back to the mid $50’s.

We also remain in that same downward Channel we spoke about earlier in the week.  This Channel upper resistance is very strong as we tested it four days ago exactly to the dollar and price dropped 21% immediately after over the course of two days of trading. 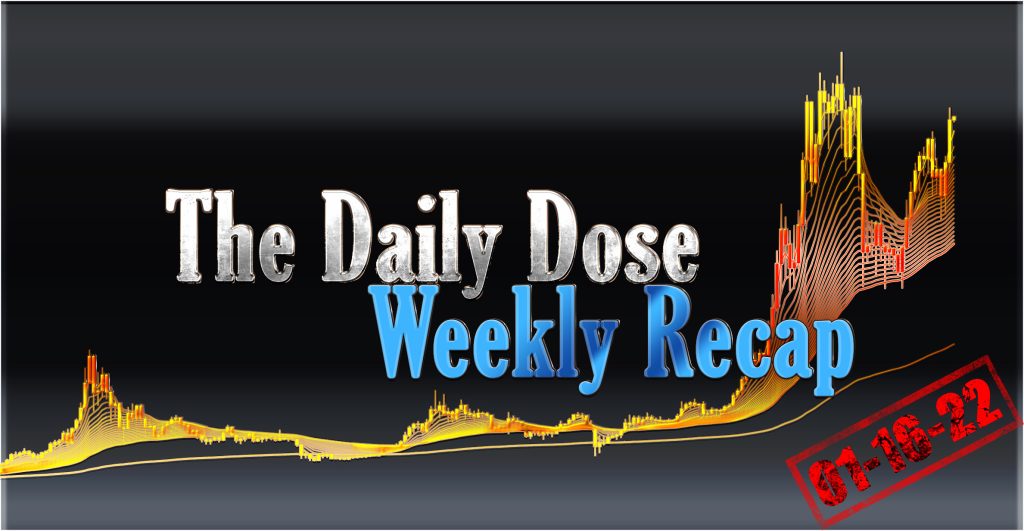 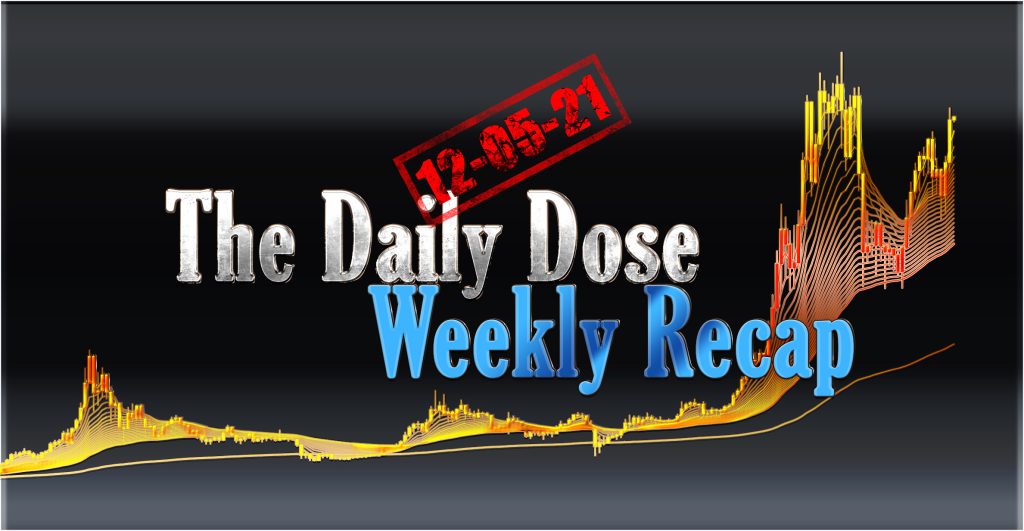 Price Action Weekly Winners – Peak Gain Weekly Losers – Peak Drop Oh what a week it has been.  There Bears were hungry this week… 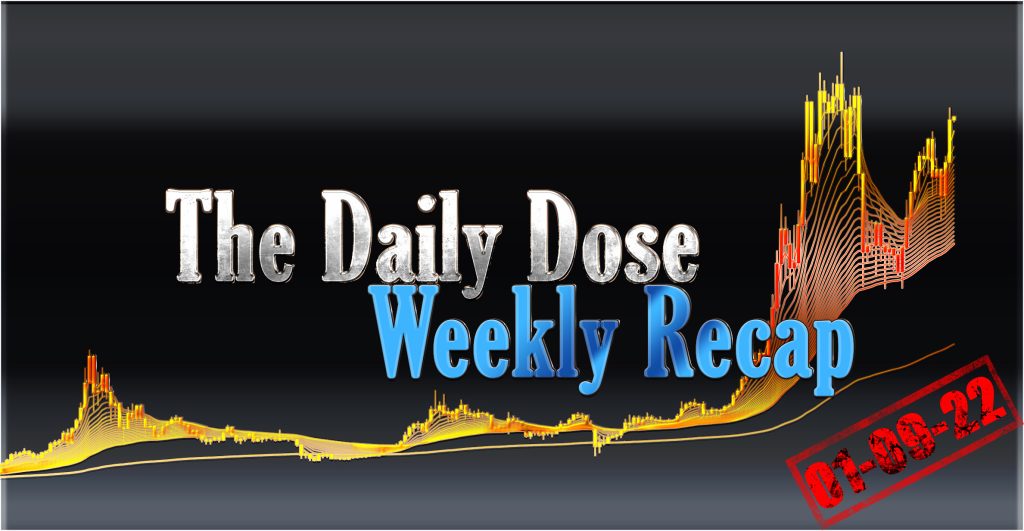 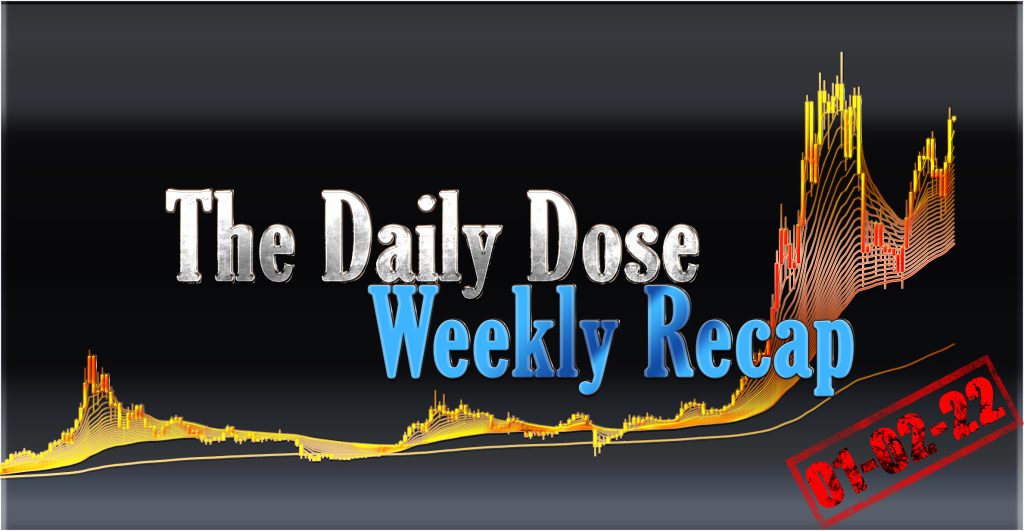