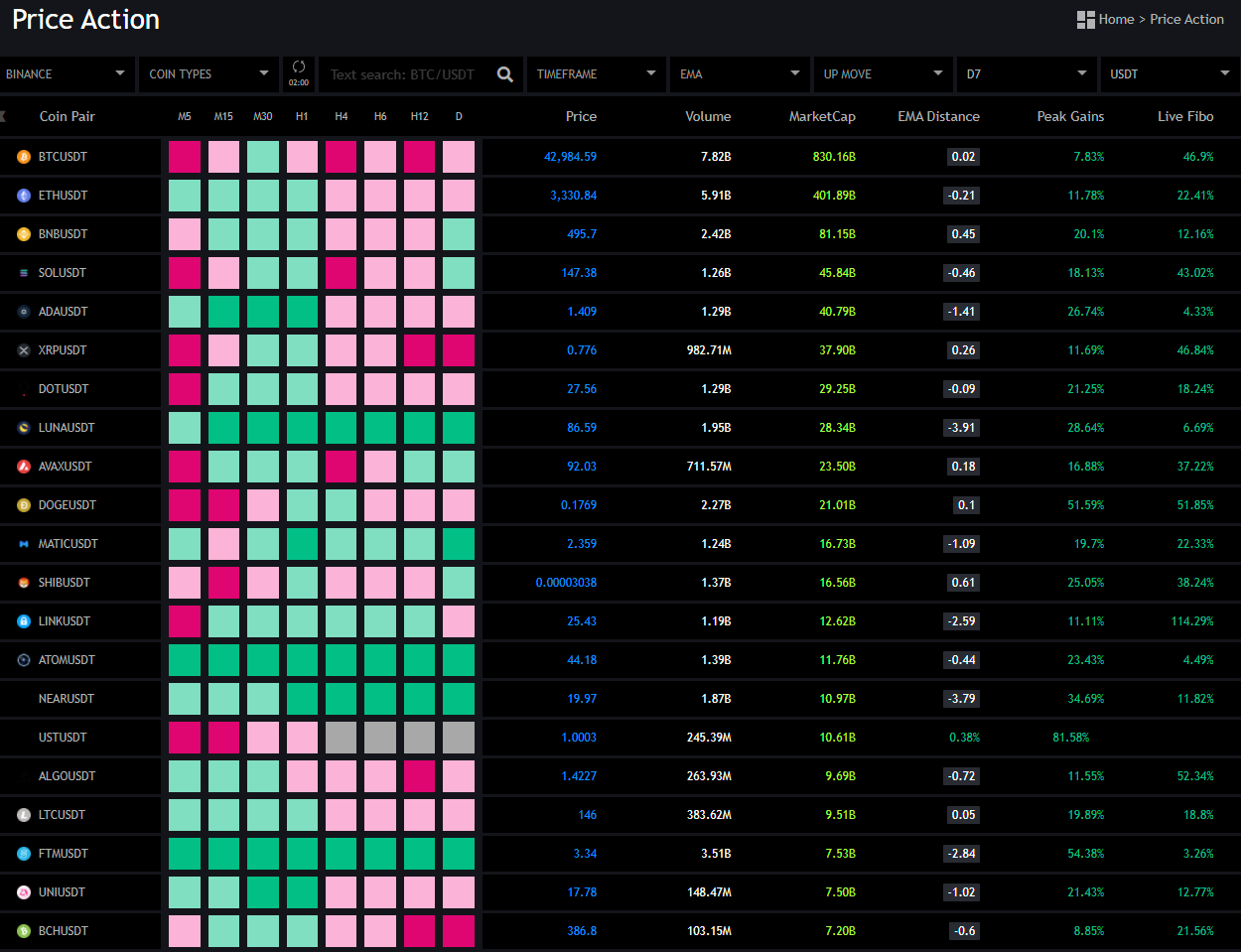 Another week in 2022 comfortably in the past and we actually have a few things to show for it.  ETH, BNB, SOL and ADA all had double digit peak gains this week while Bitcoin struggled early in the week.  That struggle Low from Bitcoins mini rally High was a $4800 swing and resulted in a peak distance move of 12%.

Global MCAP remains above $2T which is a massive challenge all by itself.  Global Volume today is already up 10% for the day and sits around $133B over the last 24-hours.  That is very impressive.

ANY, DUSK and KP3R all had some really impressive moves up.  GLMR is on the list but has too little history for consideration.  ACH, SANTOS and DCR made the Peak Drop for the week list.

BTC and ETH continue to trend together posting a correlation of 0.92.  Besides these two, virtually every other major correlation pair has dropped its correlation and loosened its grip on each other.

The great separation is not exactly a good thing unless we can identify specific comparisons between the ones that try to move together.

Yesterday, Last Week and Last Month all register as Extreme Fear.  These are generally times to buy, especially when in an up trending market.  Time will tell whether Bitcoin has had enough of this downside push from its $69K ATH or if Bitcoin is looking to start a fresh rally similar to last year. 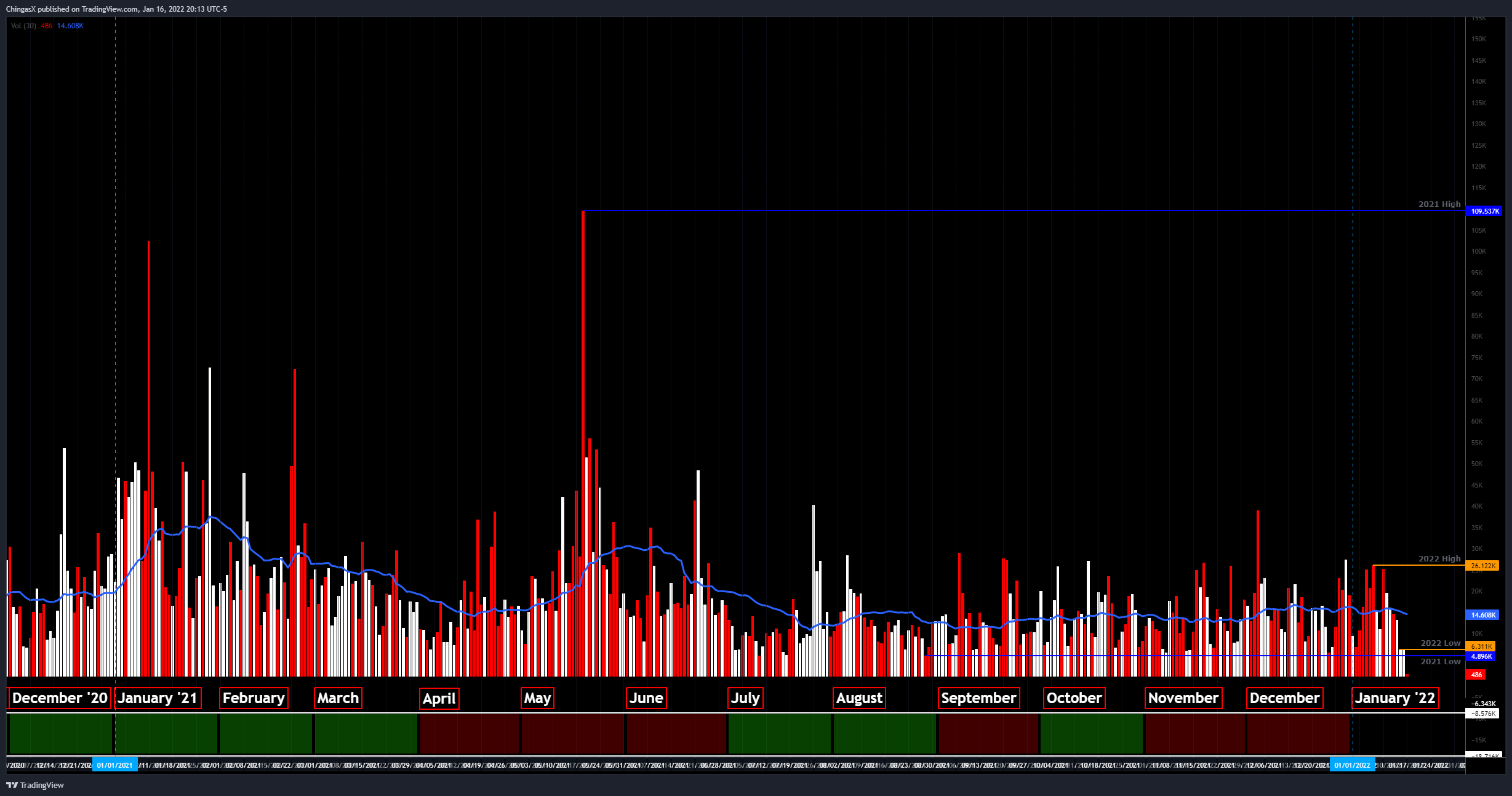 We’re only 16 days into the year but we did break a yearly low in Volume the other day.  We are still higher than the 2021 Low, so there is nothing to worry about yet.  The overall Average Volume is dropping off again but we remain in the same range that we have been in since August of 2021.  We did see a rise last January that lasted for for about all of January but we have not seen anything even remotely close this January. 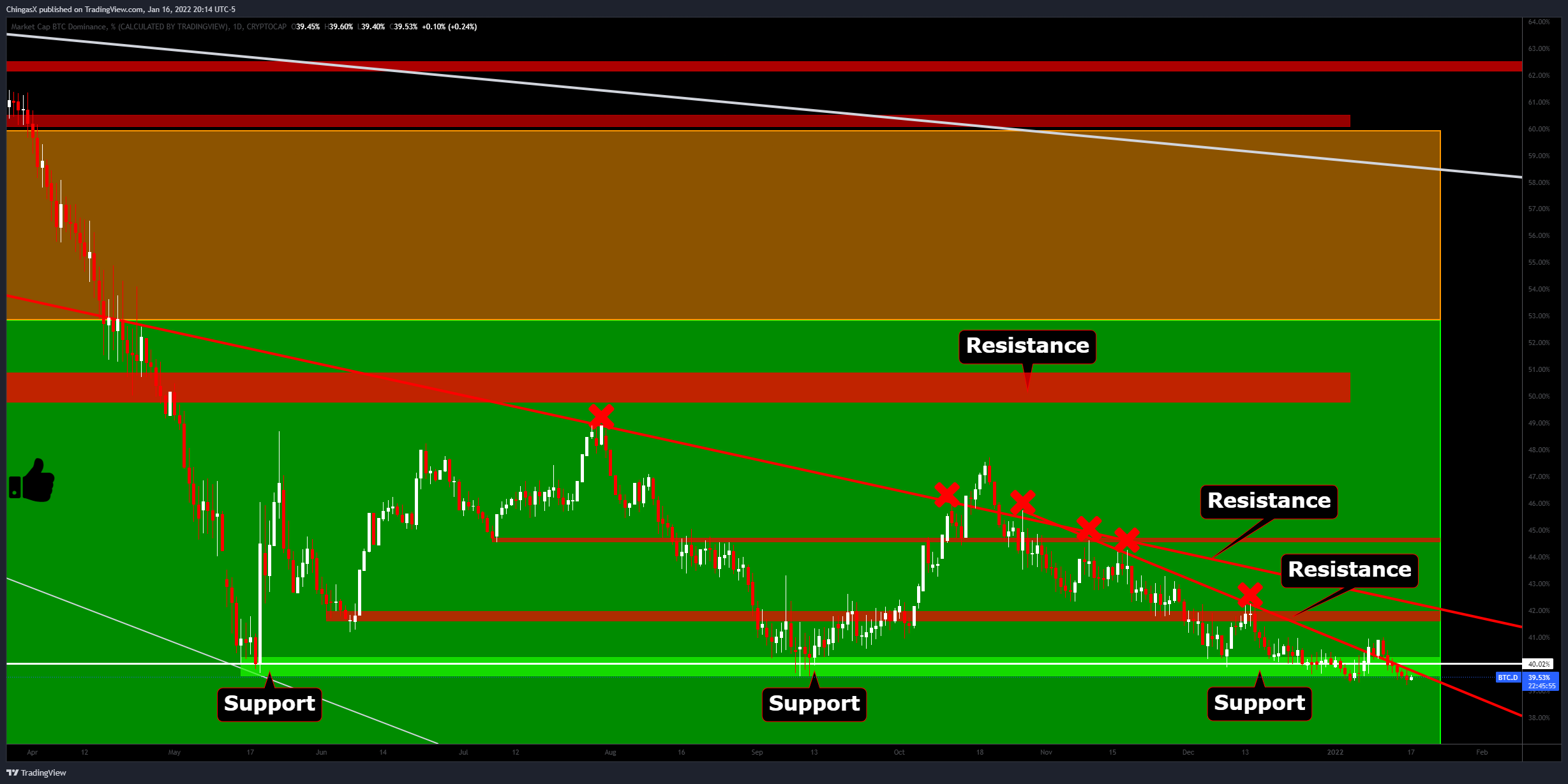 Here we go again.  A little up and a little down but for the most part, we remain consolidating around that 40% level.  I was not ready to change the Support to Resistance just yet as we are still in an acceptable area just outside of the Support Zone.

The resistance trendline is really laying into the action at the moment and Dominance doesn’t look like it’s getting any kind of break.  If Dominance were a price value instead of a percentage then we could start having the SQUEEZE conversation but we will save that for another day! 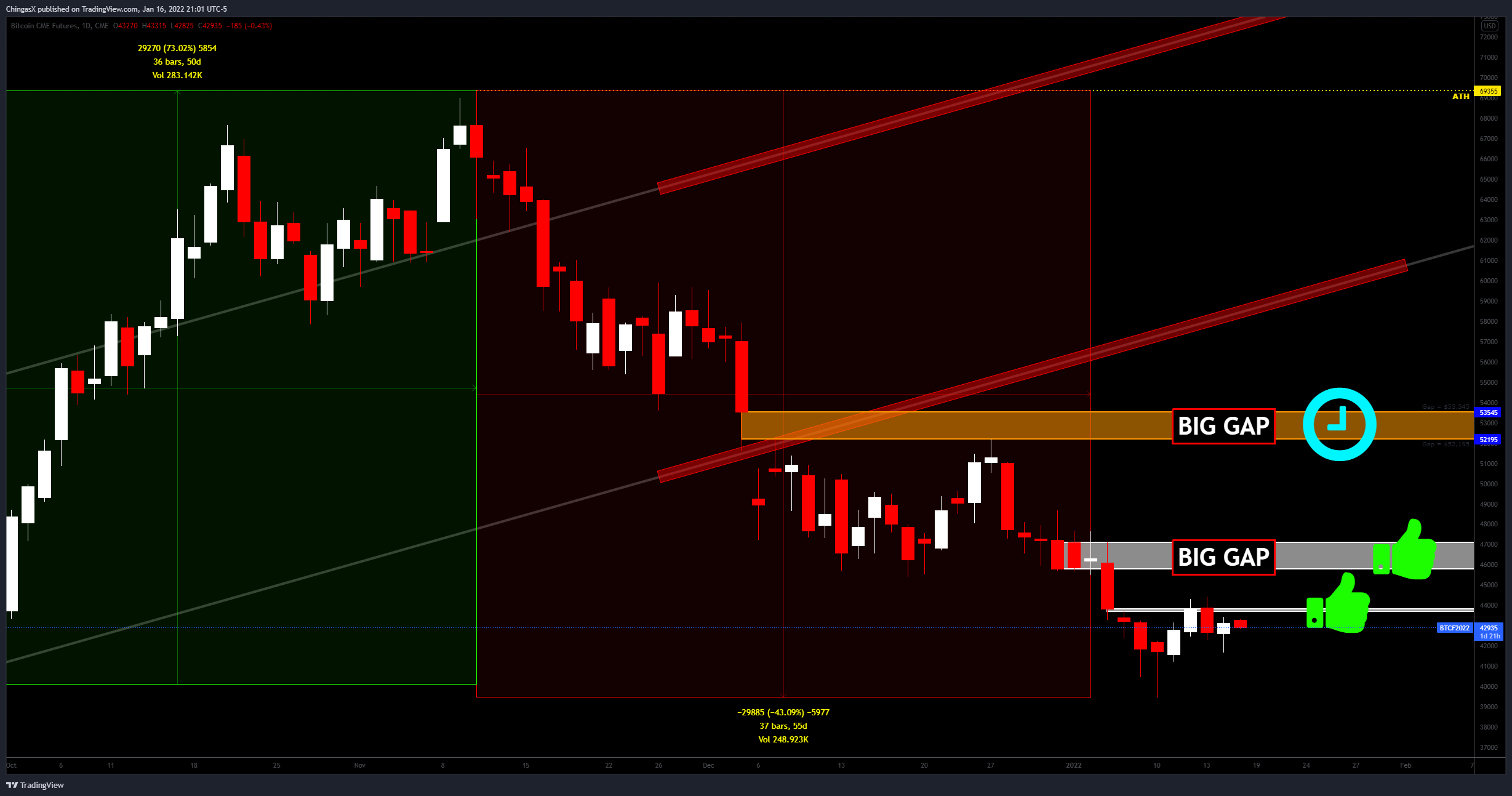 One of the two Big Gaps was filled two weeks ago and this tiny little baby Gap that was left over earlier in the week has also now been filled.  The Chart above reelects WHITE as filled and ORANGE as a remaining Gap that needs to be filled.

Bitcoin is clearly trending downward on the Daily but that Gap above does leave some speculation that Bitcoin will fill that zone before any further downside.  The opening so far today was to fill the Gap from the close on Friday.  That Gap has been filled. 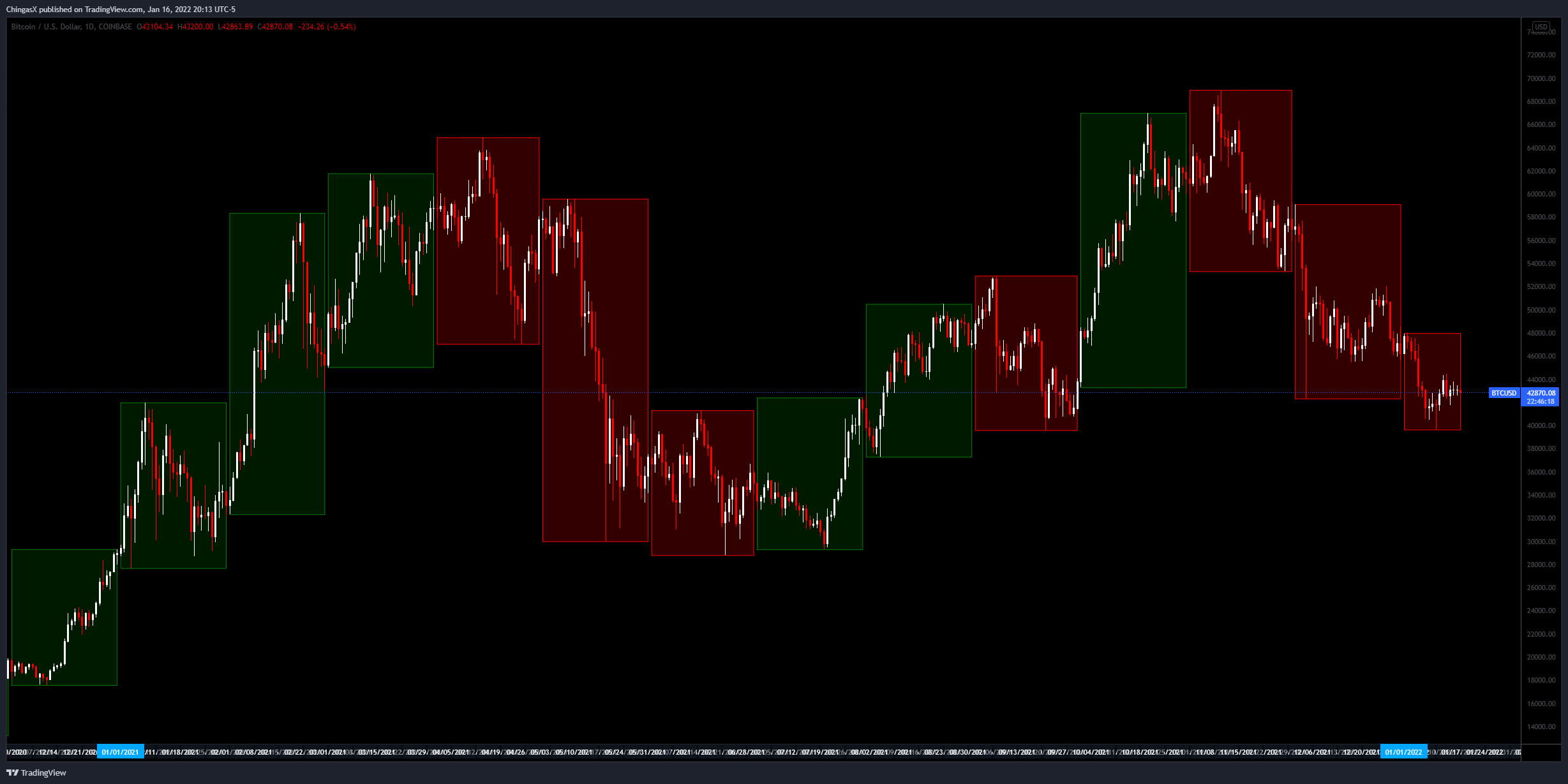 We have reached the second half of January and the month is still very much RED.  Three red months in a row will be a repeat from last year and won’t be too big of a deal, unless, of course, Support is so far away that we see some type of Black Swan drag us all the way down into those Zones.  All things considered, at least from this view, the downward action is looking more and more like it’s more than just a pullback. 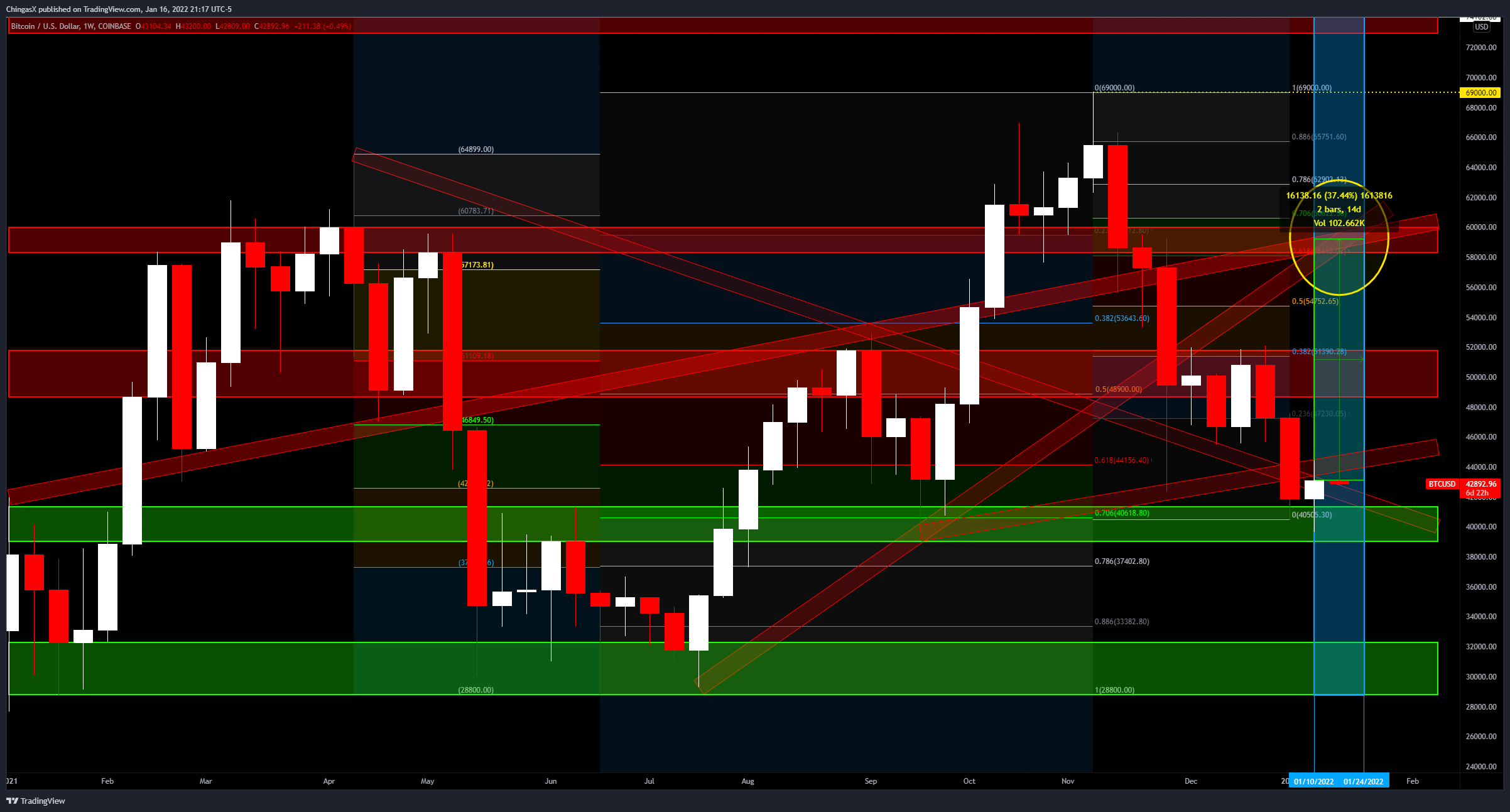 Not impossible but we would need a 37% move to get to the target confluence area we spoke about for the last few weeks.  This would mean an increase in Bitcoins price of over $16K – a lot but not impossible.  Focus your attention to the second and third week in February of last year and you will see that Bitcoin shot up $19,500 in just two weeks.  Even more recently in the first and second week of October, from Swing Low to Peak High, Bitcoin pushed upward for $15,993 and that low was not far from the low we have currently found support from.

The $39-41K Support Zone does seem to be holding for now and there is no reason to panic until that actually breaks.  There is a case to be made for a rally to the 618 and there is a case to make for consolidation for a few months.  But we can never pretend that the overwhelming pressure and momentum is coming from the sell side. 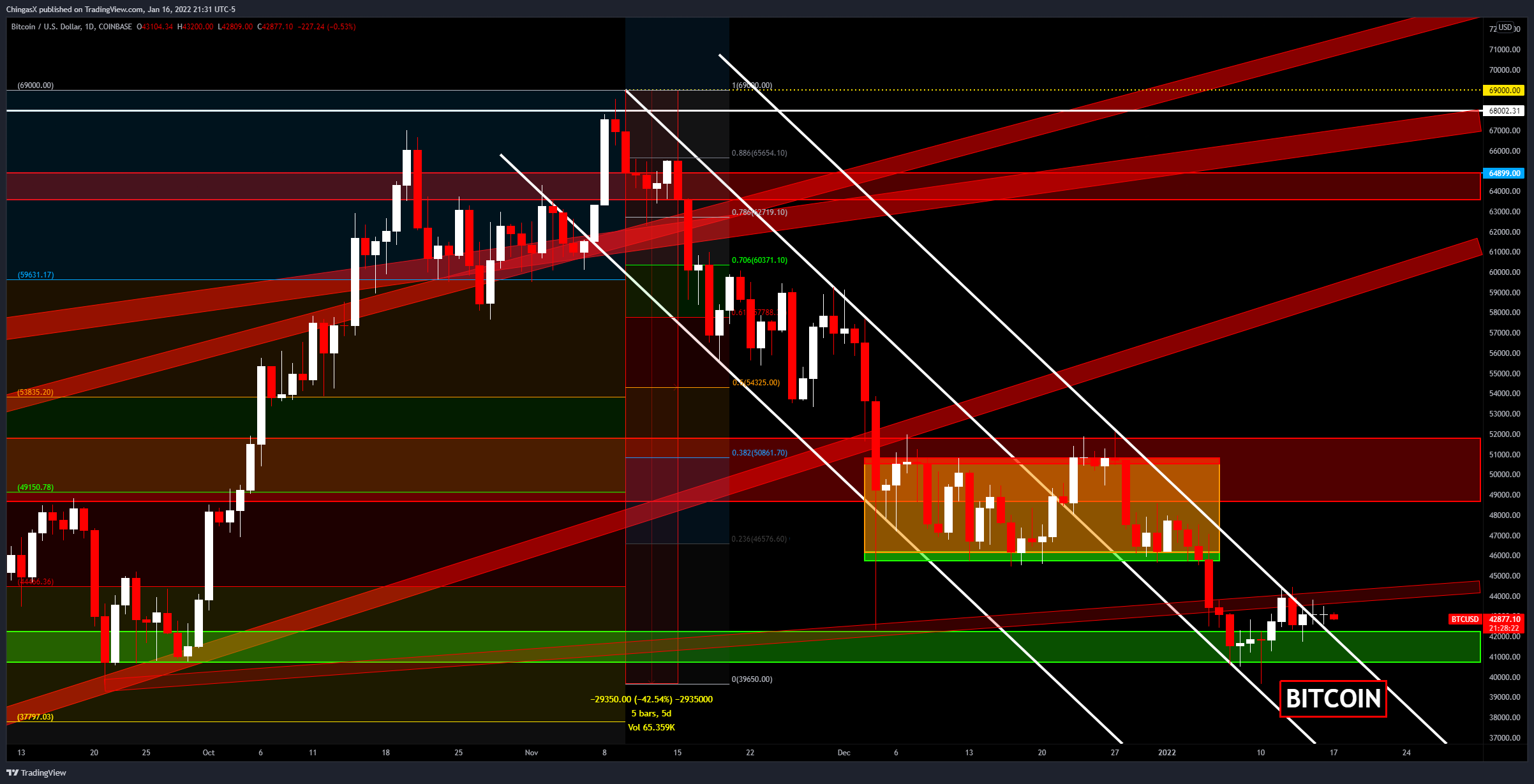 Make no mistake about it, we are trending down.  The Buybacks in the Support Zone are a relief for many but Bitcoin is far from out of the woods just yet.  Local Support-Flipped-Resistance in the form of an upward sloping trend is keeping the local price action down.

Even worse is the potential for a Bear Flag in the works.  If this breaks to the downside then we are looking at a $12K move to the downside which lands us directly on our next major level of Support at $30K.

We do have some technicals that are trying to tell a bullish story but we are not quite there yet.  The way a Bullish story plays out is a massive break above the older Range.  Call it $52K.  You see a move like that – get ready to Rock N’ Roll.