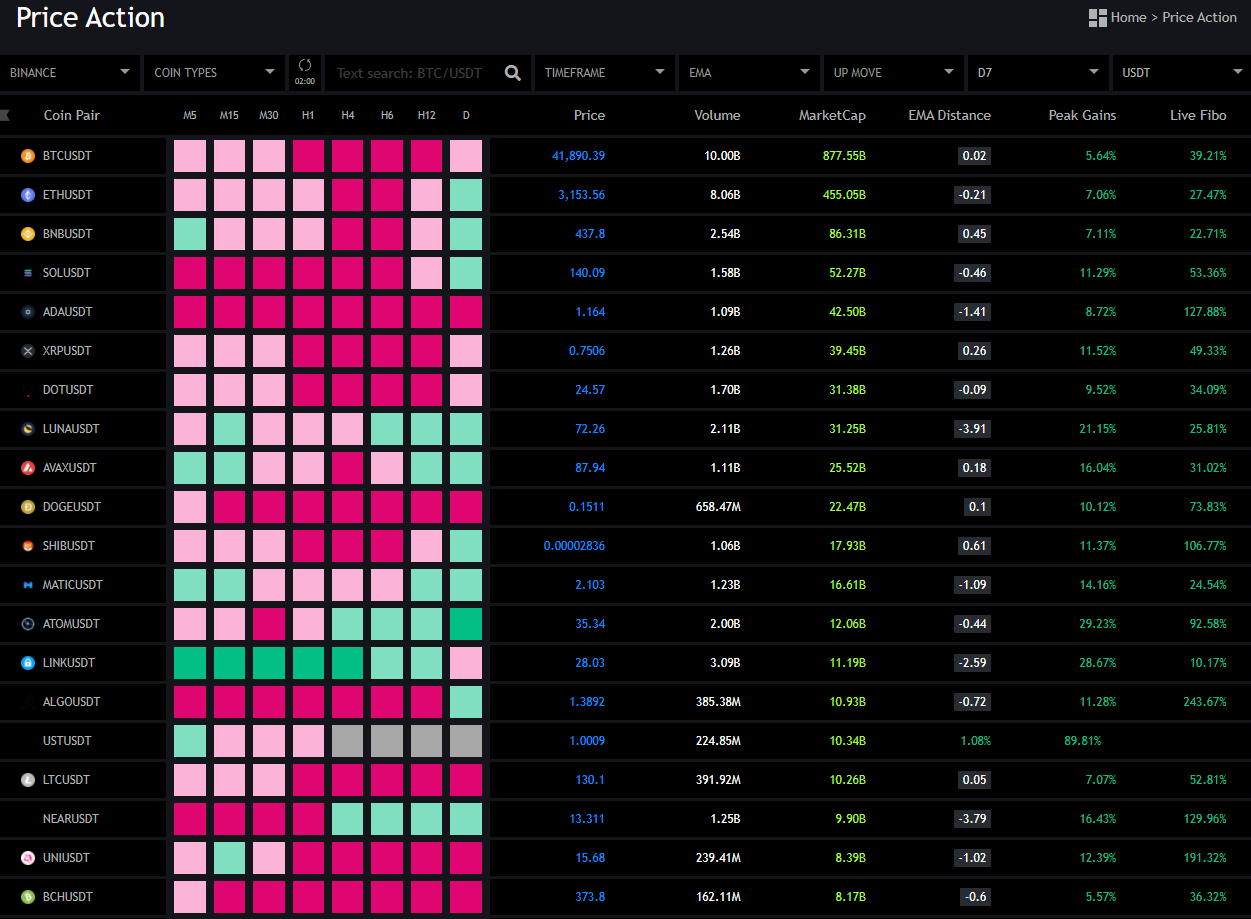 Last week marked the first full week of trading in 2022 and to say it could have gone batter is quite the understatement.  The Bad News – Bitcoin lost just over $5400 last week alone.  The good News – Bitcoin found weekly Support and bounced slightly from that area.

There were a few outliers, as there always is but even then, as crazy as it sounds, not a single token pushed for over 100% last week.  Although 100% seems incredible, it’s almost a weekly occurrence for at least one token.  IRIS went for just a little over 80% and that was essentially the big dog on campus.

Downside was also pretty tame, all things considered.  BNX, DUSK, SPELL and SLP were all the big losers with peak drops in the mid to low 40’s.

We now have two assets posting a correlation of 0.90 or above with Bitcoin.  ETH is sitting at 0.90 and Litecoin is sitting at 0.91.  This is like the good ol days all over again when the top 3 would mirror themselves candle by candle for weeks at a time.

When Bitcoin sheds $5400 and breaks all kinds of Support – people get scared.  Last week the reading was 29, which is moderate FEAR.  Yesterday and today, the Index is reading 23 and that is now in the Extreme Fear section.

Investors are very afraid that if Bitcoin slides more that the entire market will go into a potential multi-year downtrend.  Of course, that is a bit dramatic but THAT is WHY we have a Fear and Greed Index!  People are scared – Period. 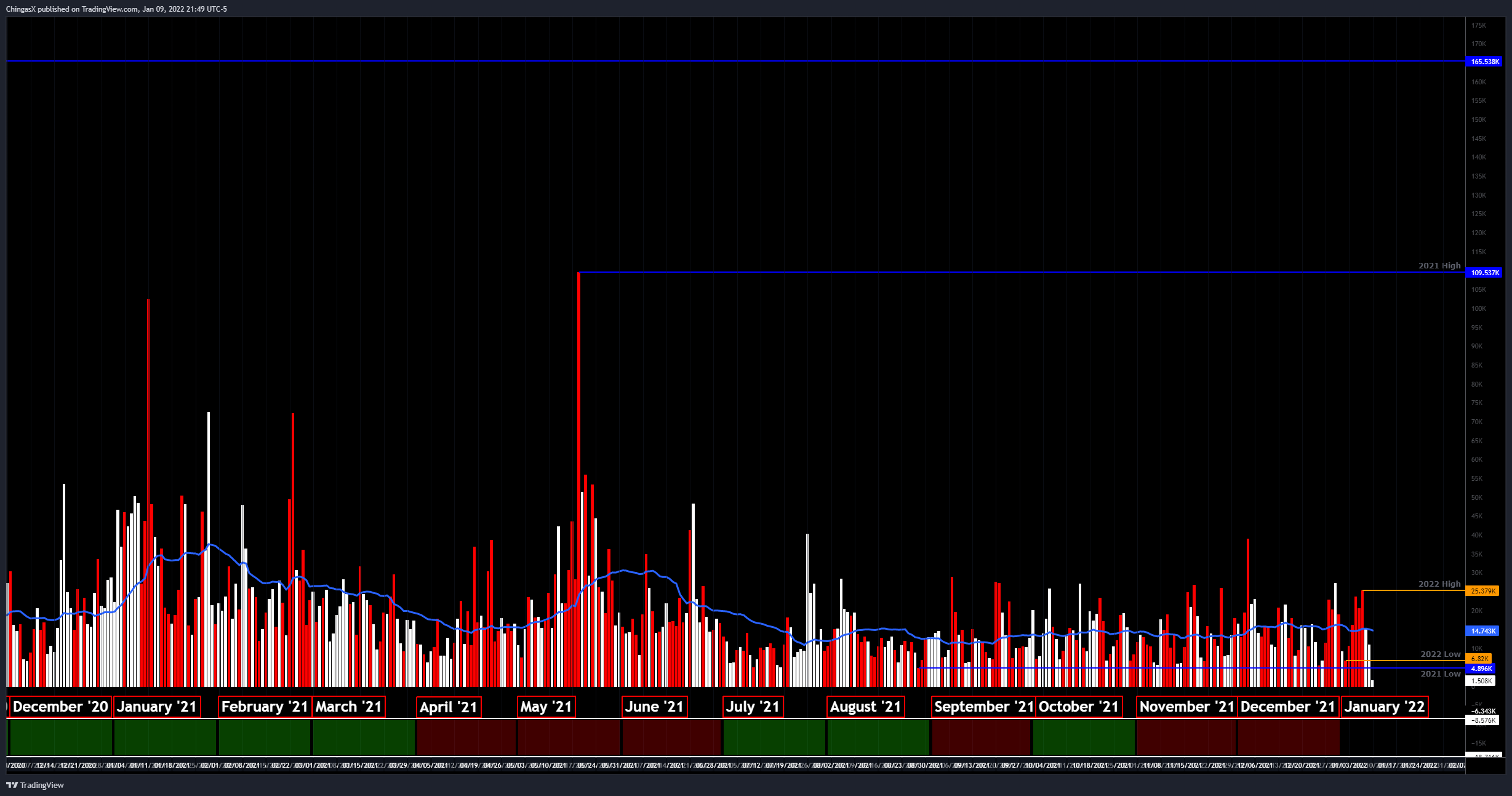 Once again, Volume is pretty stable.  The average has been pretty consistent ever since the big slowdown in July.  Volume is not trending up nor is it trending down.  We have entered a new year and as always, we will continue to track the major Highs and Lows of the year just as we did for Last Year.  We can say that the 2021 Low so far is almost equal to that of the 2021 Low and that is not exactly a record we want to break. 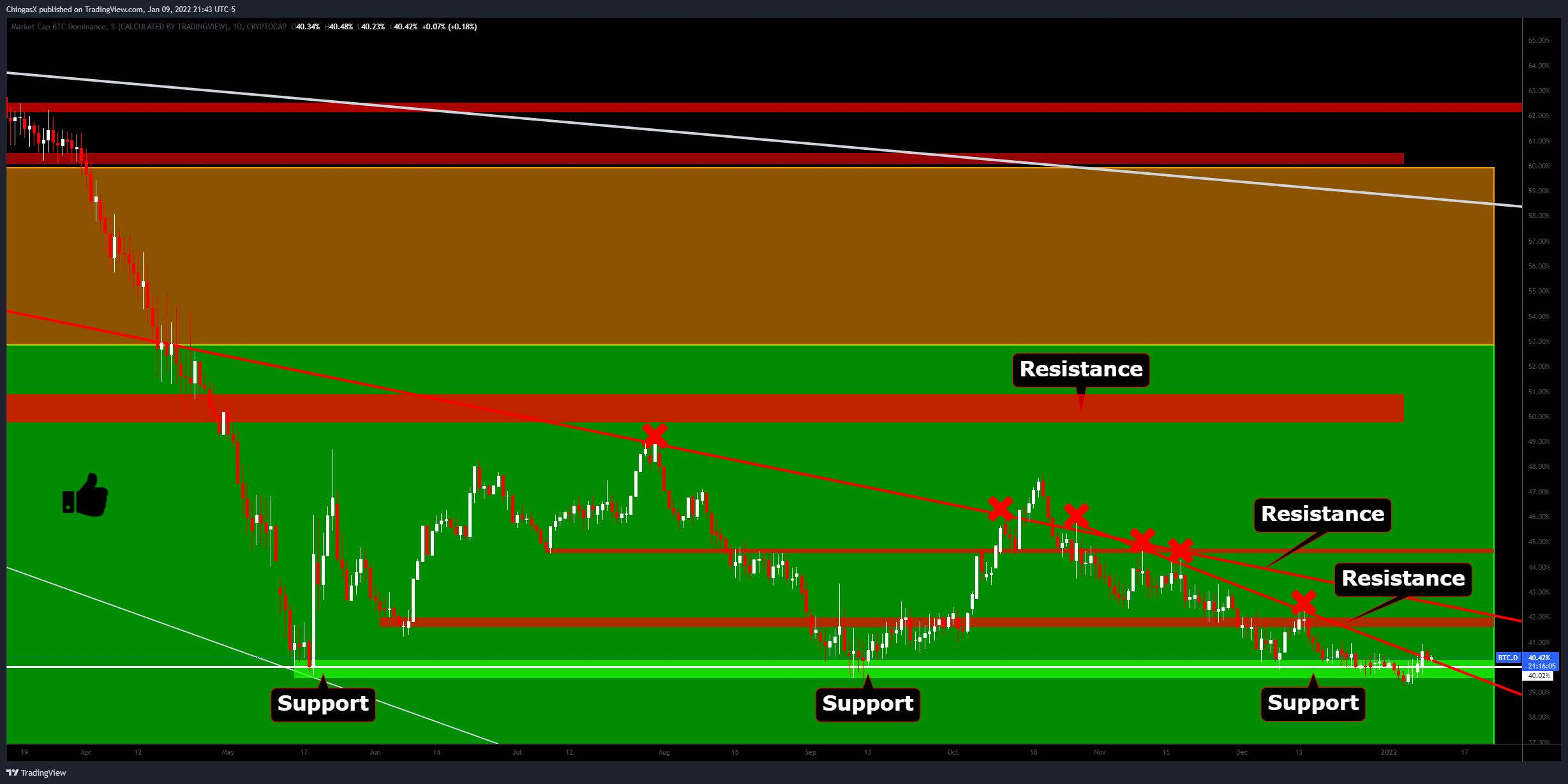 As crazy as it sounds – 40 continues to hold.  Up, Down, Left and Right….. Dominance really loves the 40% level and has been all over that level for quite a while now.

We did have one day where we closed under the low but all that did was spark a 4-day rally back to resistance.  Speaking of resistance – the local downward sloping trend is providing all the resistance Dominance needs.  Dominance is now being squeezed from Local resistance and the 40% Support level.  It’s not make or break time but we are about to see just how strong this local resistance actually is. 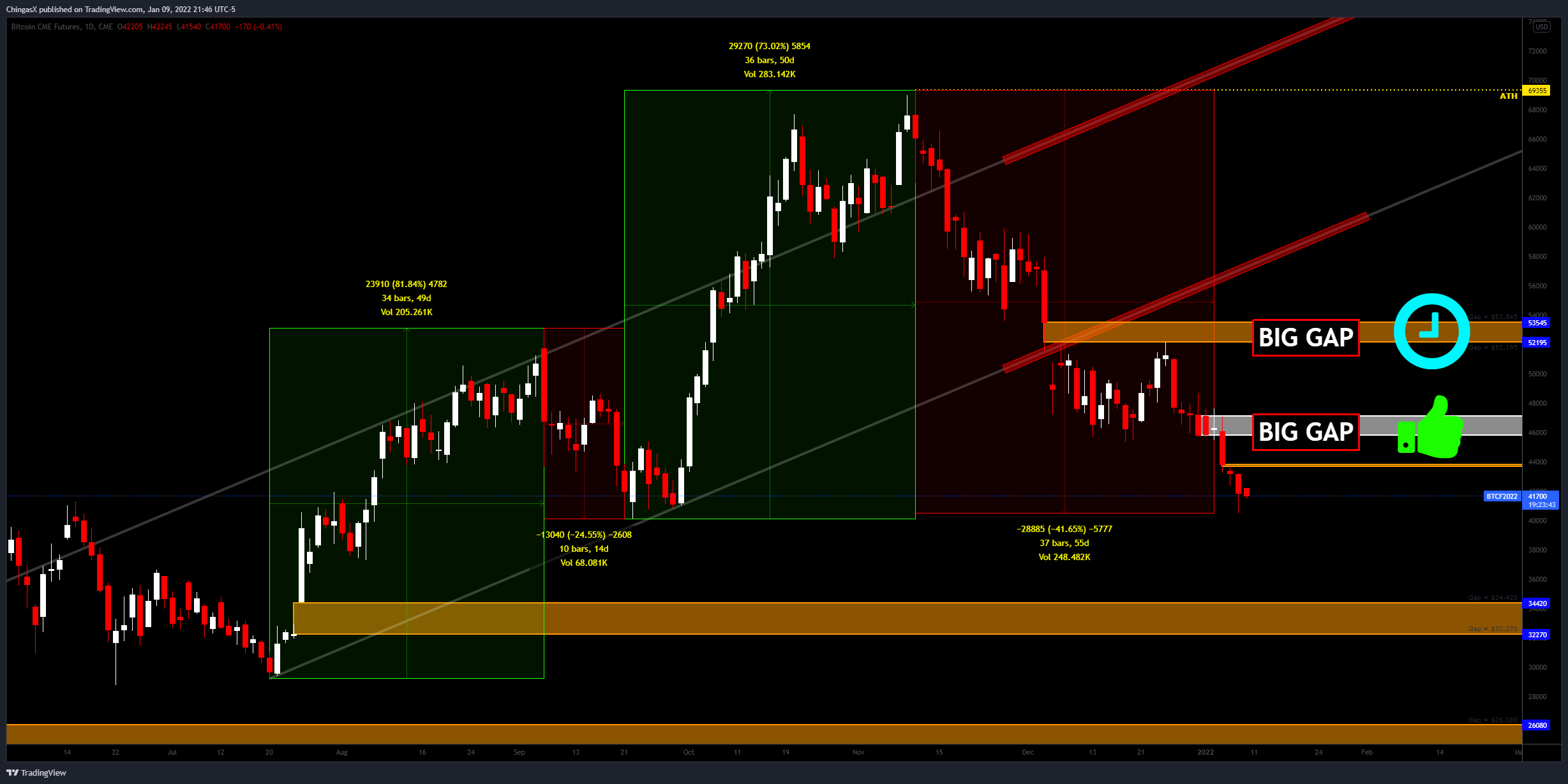 The Wild Child over at the CME is back at it again.  Another very large Gap was created last week and then was immediately filled to the downside on the following day.  The Bulls are simply getting crushed.  Ever time they try a decent move or a decent bounce they get severely punished for their attempts.  CME has crushed the market multiple times over the last few weeks and it continues to do so while it remains firmly in the drivers seat.

We still have the larger GAP up above but we are now trading closer to a lower gap from July as opposed to the larger Upper Gap from a few weeks ago. 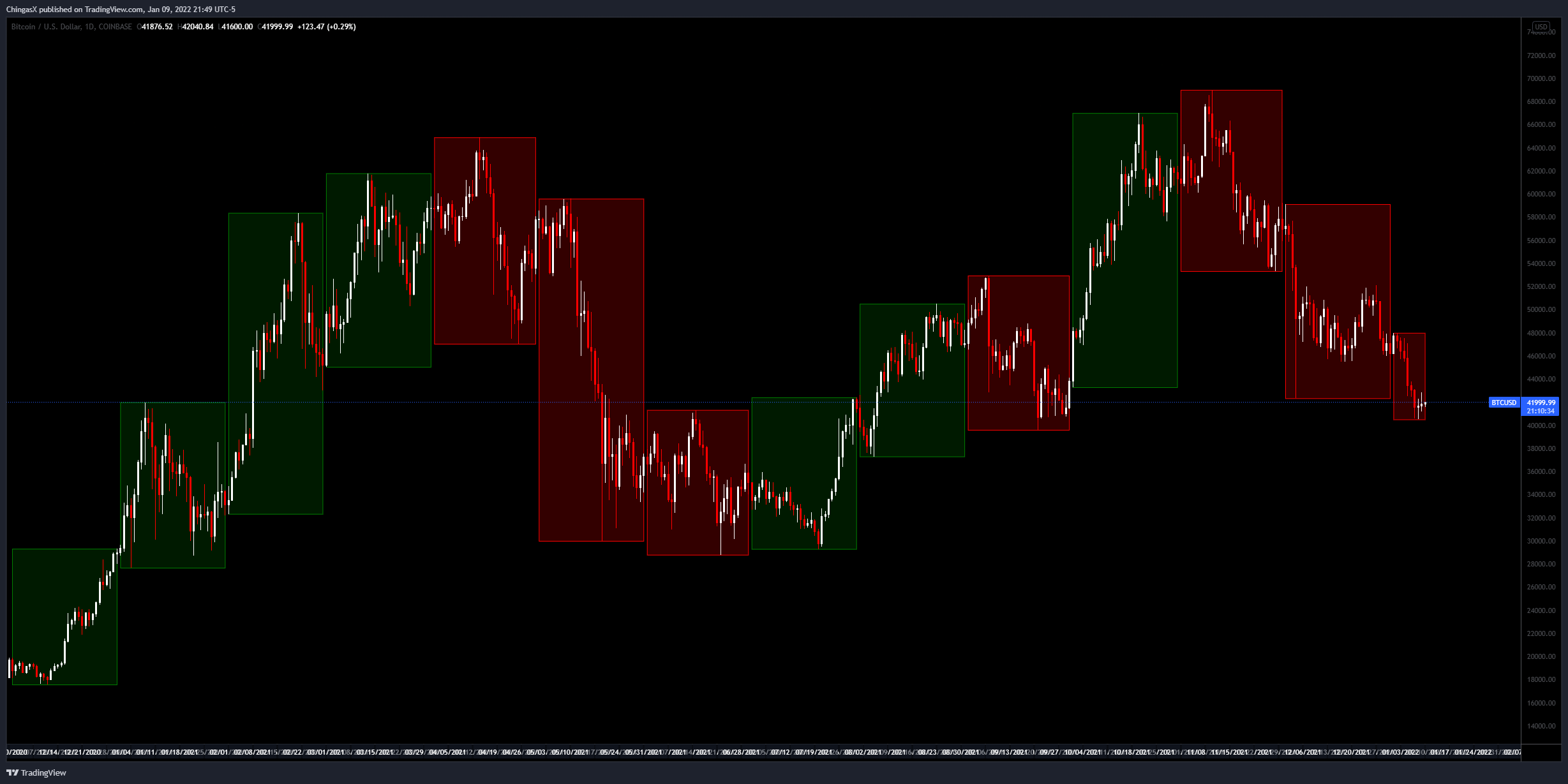 November and December both closed red and they are both pretty large as far as monthly losses are concerned.  The end of the year rally simply did not come and the market has been shedding it’s gains for over 60 days now.

January is already bleeding pretty hard and has already swept the lows going back four months ago.  It’s going to take a very large move to turn January green and at the moment, there does not seem to be much of a spark or catalyst. 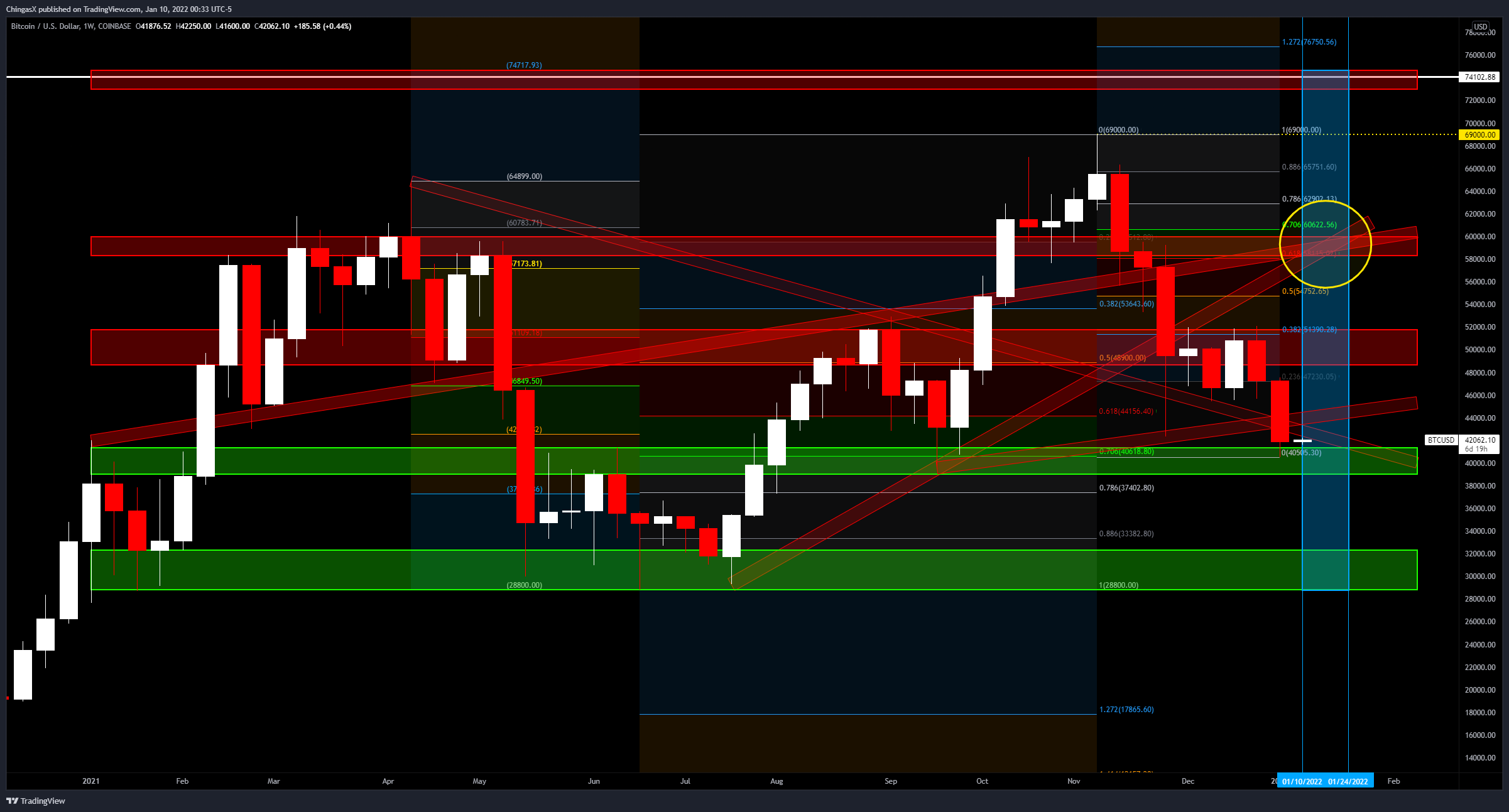 Bitcoin is now down over 40% from it’s ATH.  Bitcoin would need about a 40-42% move from here to reach that area of confluence that will be posted up for the next three weeks.

The Big time weekly support near 40K was tested and is currently holding.  The issue with Support levels currently is the weight that is pushed on them.  This is not a level that enjoys being tested but even worse, a level that is tested after a significant, momentum building, 40% drop.  That being said, momentum died when Bitcoin started going sideways and last weeks candle could have been the last ditch effort to fill the lone wick and sweep the lows to shakeout the weak hands.

Regardless of what happens next, 39-41K remain Support until they have been officially broken and flipped to resistance.  Bitcoin has a chance here to make a full correction but it is going to take a lot, from a lot of traders. 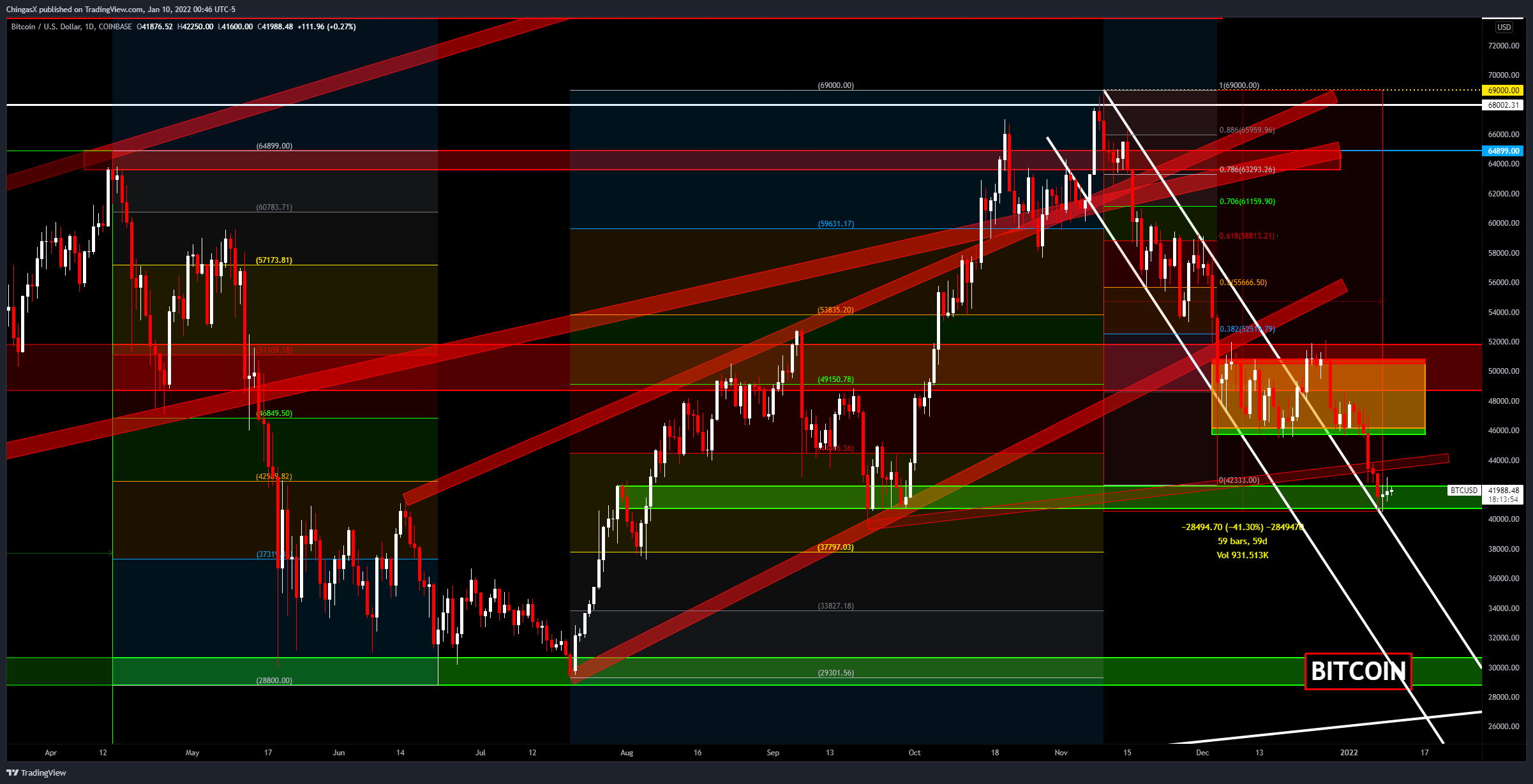 Bitcoins next major support is at 30K.  Structure Low for the Macro Trend is $39,600.  Our current low was $40,505.  That is dangerously close to calling it a day and stamping Bear Market on Bitcoin.

The chart is ugly and the trading is even uglier.  Short opportunities keep getting swatting down by local Bulls and the Bears seem to be almost recklessly breaking Support levels on what seems like a Daily basis.

We are currently trading on Support and this is the final Support level above the Structure or Trend Low.  Drop below $39,600 and you have officially lost the trend from July and likely head back down to the 30K’s.  Break that Support and you could be looking at the 2017 ATH at around 20K.  So, to say there is a lot riding on 40K would be a perfectly reasonable statement to make.