As we can see from the image above, the Crypto Market and Bitcoin in particular are struggling. The rallies the other week are over, and we are seeing price action in levels at or even below the lows we saw in June of 2022. 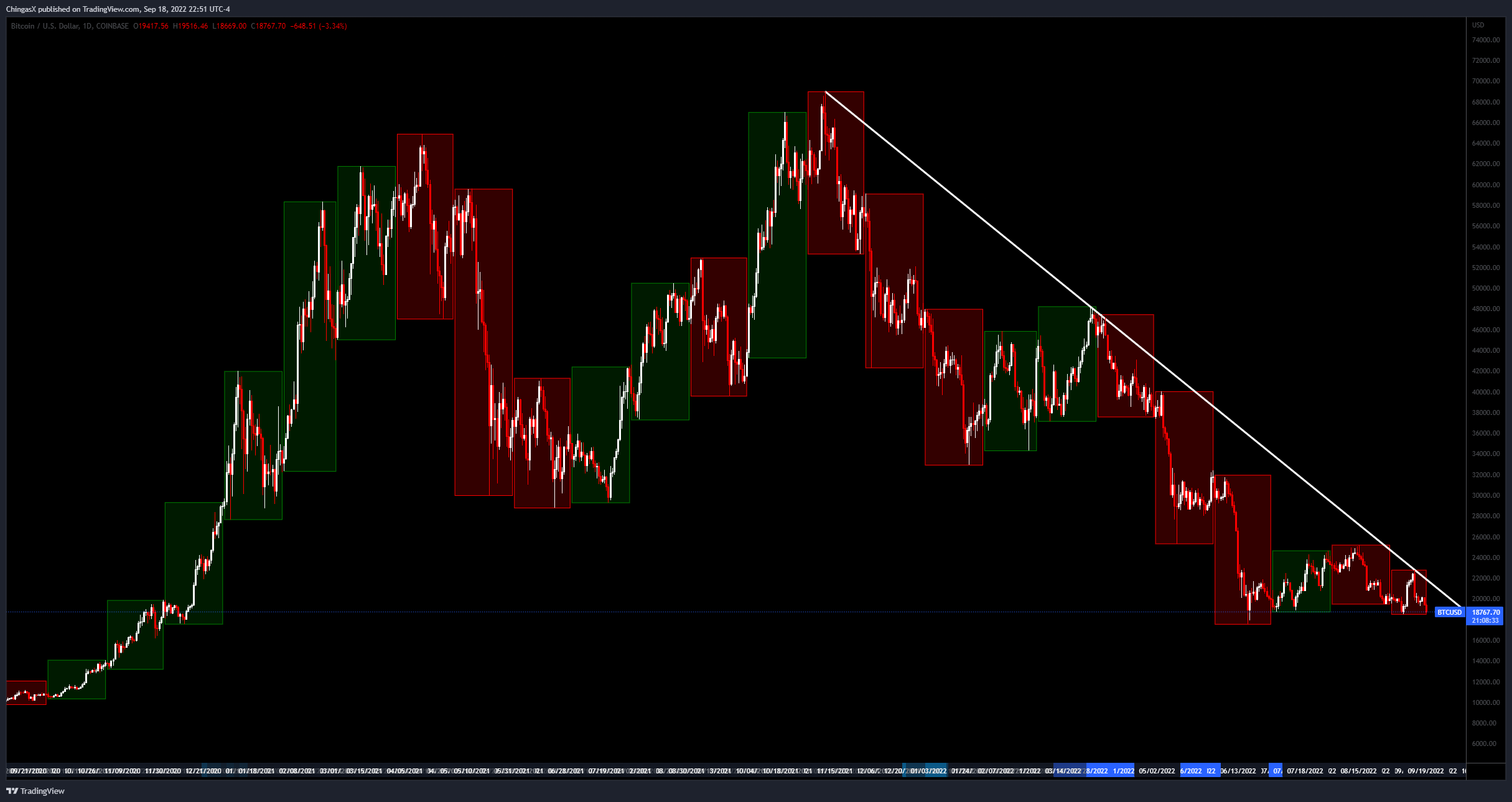 Our Long-Term view remains under the main trendline from the ATH back in November. We have successfully swept the lows from August and that has turned September red for now. We are just beyond the halfway mark of this month but unless we get a serious rally to the high side, we are looking at possibly retesting the lows back in June. 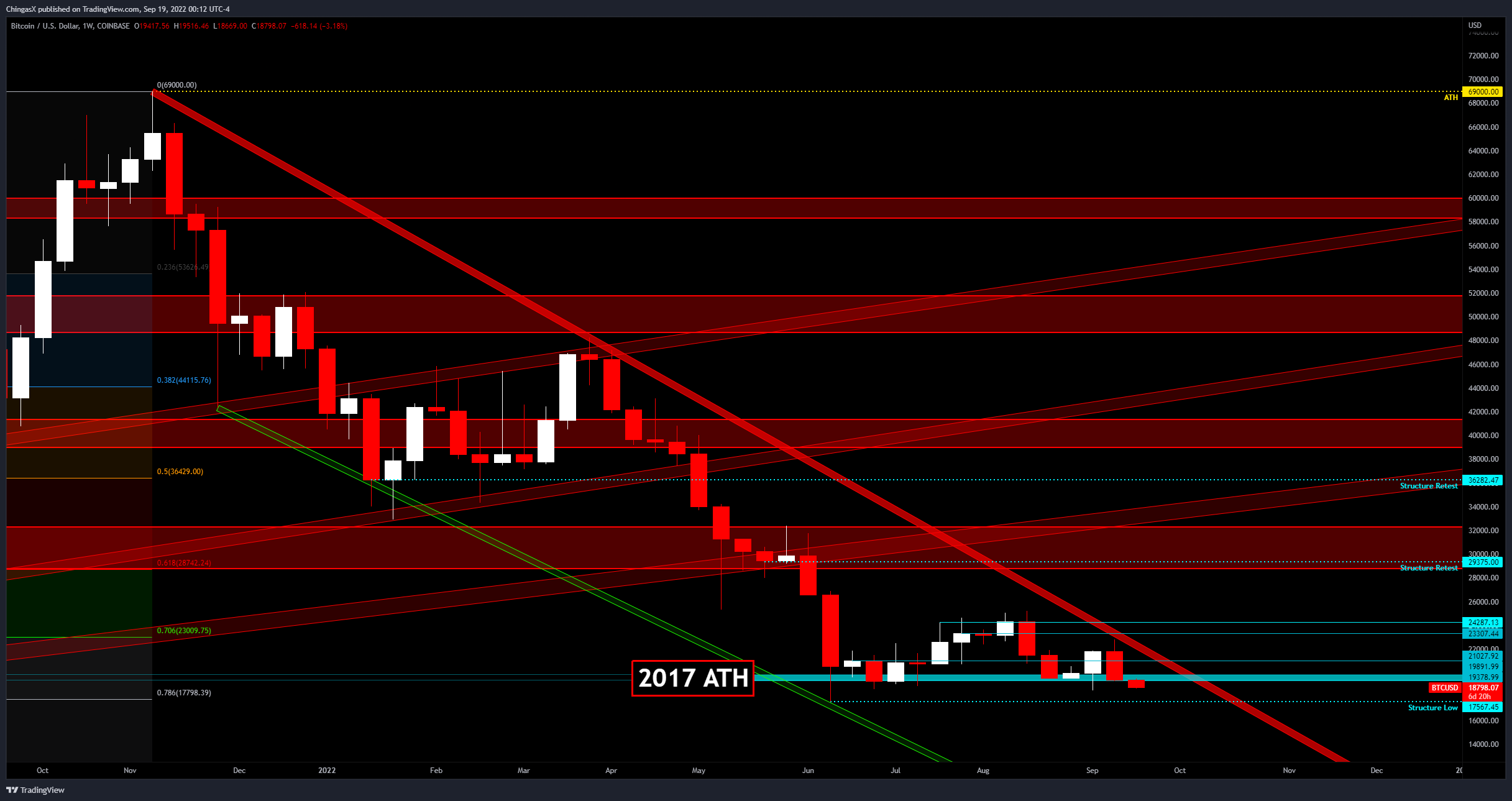 Bitcoin continues to struggle with this area between $18-24K. More specifically, the $20K 2017 ATH Zone. Last week finished a demoralizing 11% loss onto everyone, but it found support directly on the low end of the 2017 ATH Zone marked in aqua. This has been and remains to be an area of equilibrium and contention between the Buyers and the Sellers. For all the ups and downs as well as all the in-betweens, we have seen Bitcoin in this general zone since mid-June. This week begins the 15th week in this area. Weeks 1-5 were sideways, weeks 6-10 were up, and weeks 11-14 were sideways. If patterns exist, look for bitcoin to hover in this area for the rest of the week before making any major decisions.

That being said, we are losing this support, and if we do, that only means one thing… more downside to come. 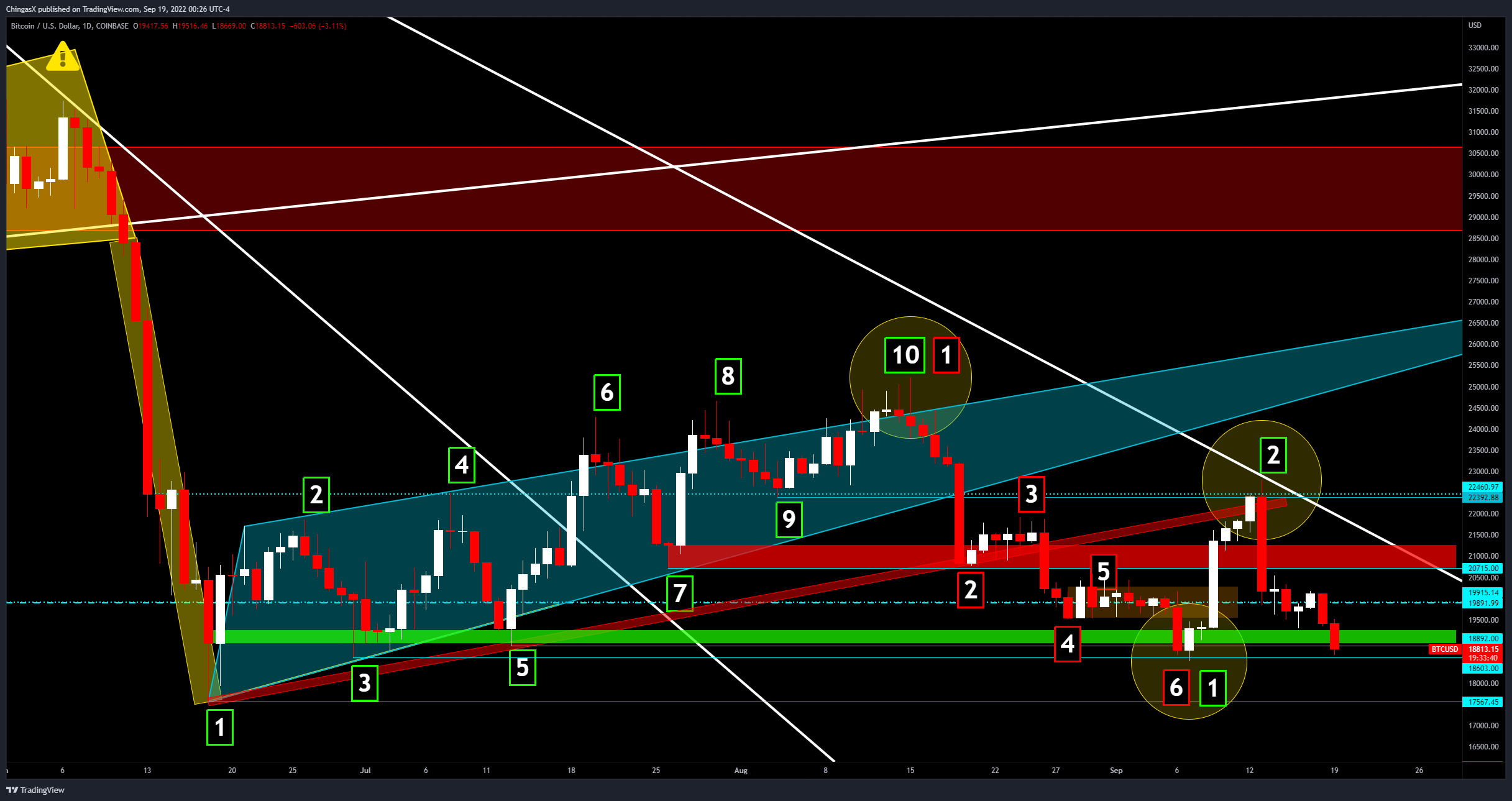 All Bulls are in HIGH-ALERT as we have once again begun trading below our recent support zone. This candle is still new and has yet to close, so the area remains support until we officially lose the zone. There is still a chance for the Bulls to step up to the plate and defend this area and create a rally later today. This would really make a statement to the Bears.

The very local action is still in the favor of the Bulls because they are essentially three pieces to the four-piece puzzle of building a short-term reversal. However, the Bulls cannot afford price action to reach the low on September 9th. If that were to happen, then the short-term trend becomes invalidated before it ever begins, and the mid-term downtrend highlighted in yellow circles would be confirmed. 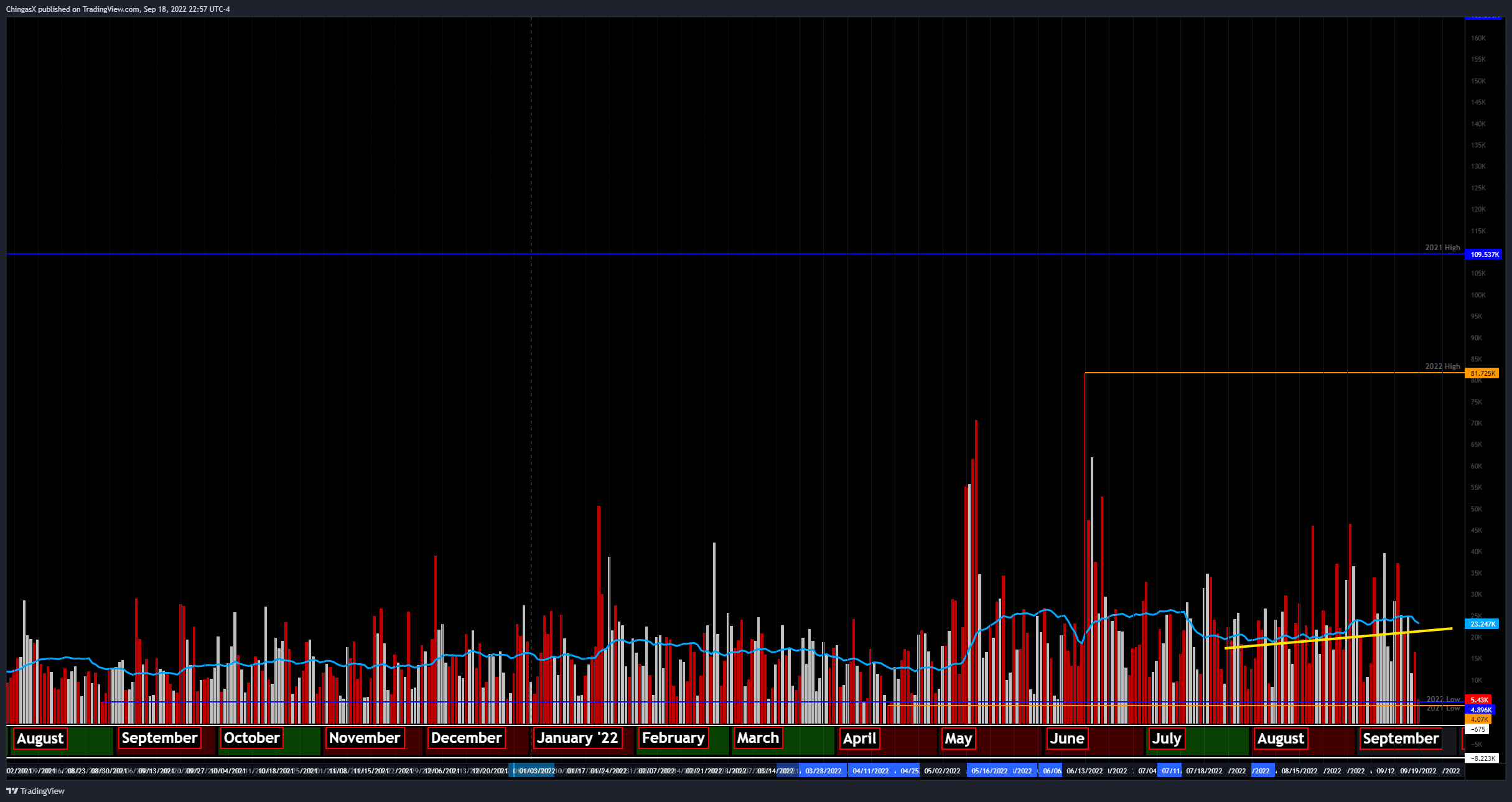 We have added a small yellow line on the chart to help identify the upward trend of Volume over the course of the last two months. In July, we had an upward rally for Bitcoin, but in August, we sold everything off. We are currently in sell mode now, with sellers taking the entire market by storm. This increase in selling, coupled with the increase in volume, is a double negative when it comes to the markets. We are seeing that more and more people are lining up to sell their Bitcoin at a discount, which is a very bad sign as it only adds to the momentum of the current direction. If you haven’t guessed – that direction is currently down. 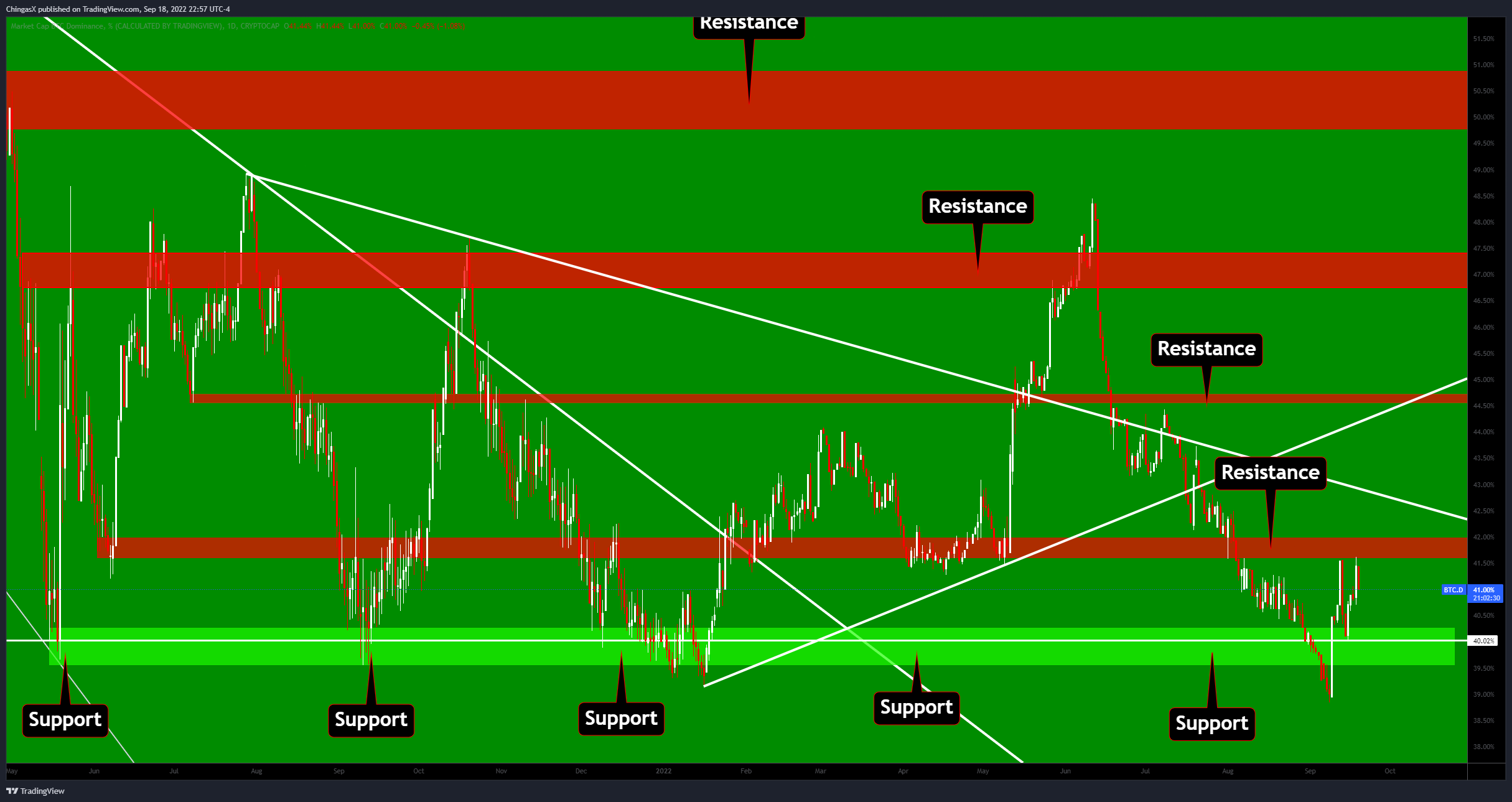 The Bitcoin Dominance chart is showing more respect for Support and Resistance Zones than any other chart at the moment. Just when Support needed to kick in, it does, and just when you think resistance will knock Dominance down again, it does. Clear as day so far. The current move looks to be testing the lower resistance, and with a day or two of this action, we may just see the Dominance try to flip the lower resistance into support. This lower support zone has been the reversal for Dominance three times prior, so if it does not reverse, we could be in for an extremely dramatic move lower. 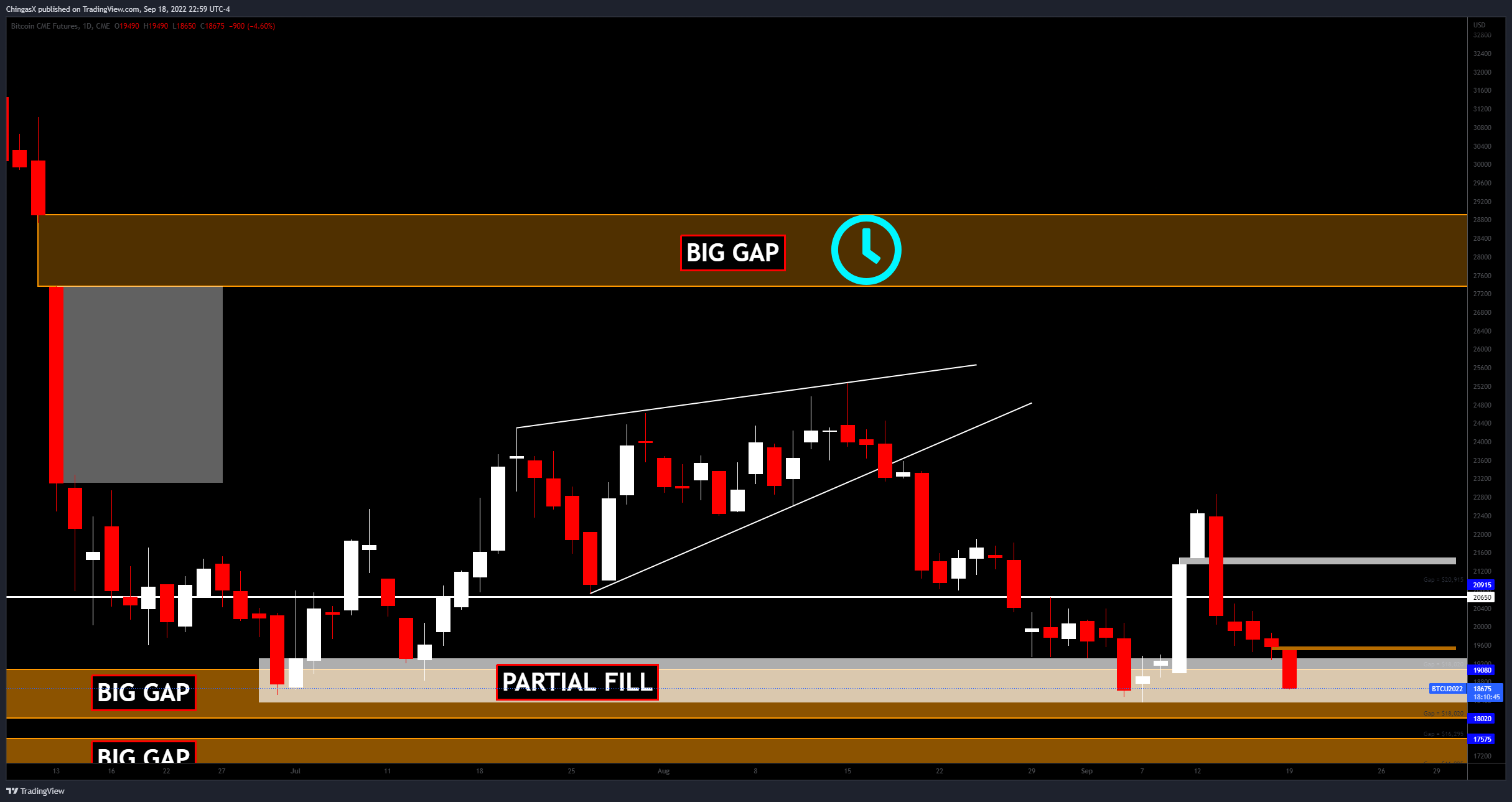 CME Futures had absolutely no problem filling the small gap left over from last week. They even dumped it all the way back to the partial fill from two weeks ago. Is it finally time to rip the band-aid off and fill these two major gaps to the downside? Possibly. There was a lot of short-term FOMO over the last week when we saw a dramatic rise in Bitcoin price. Those Bulls are long dead now and the Bears that have been running the show since last November are laughing all the way to the bank. 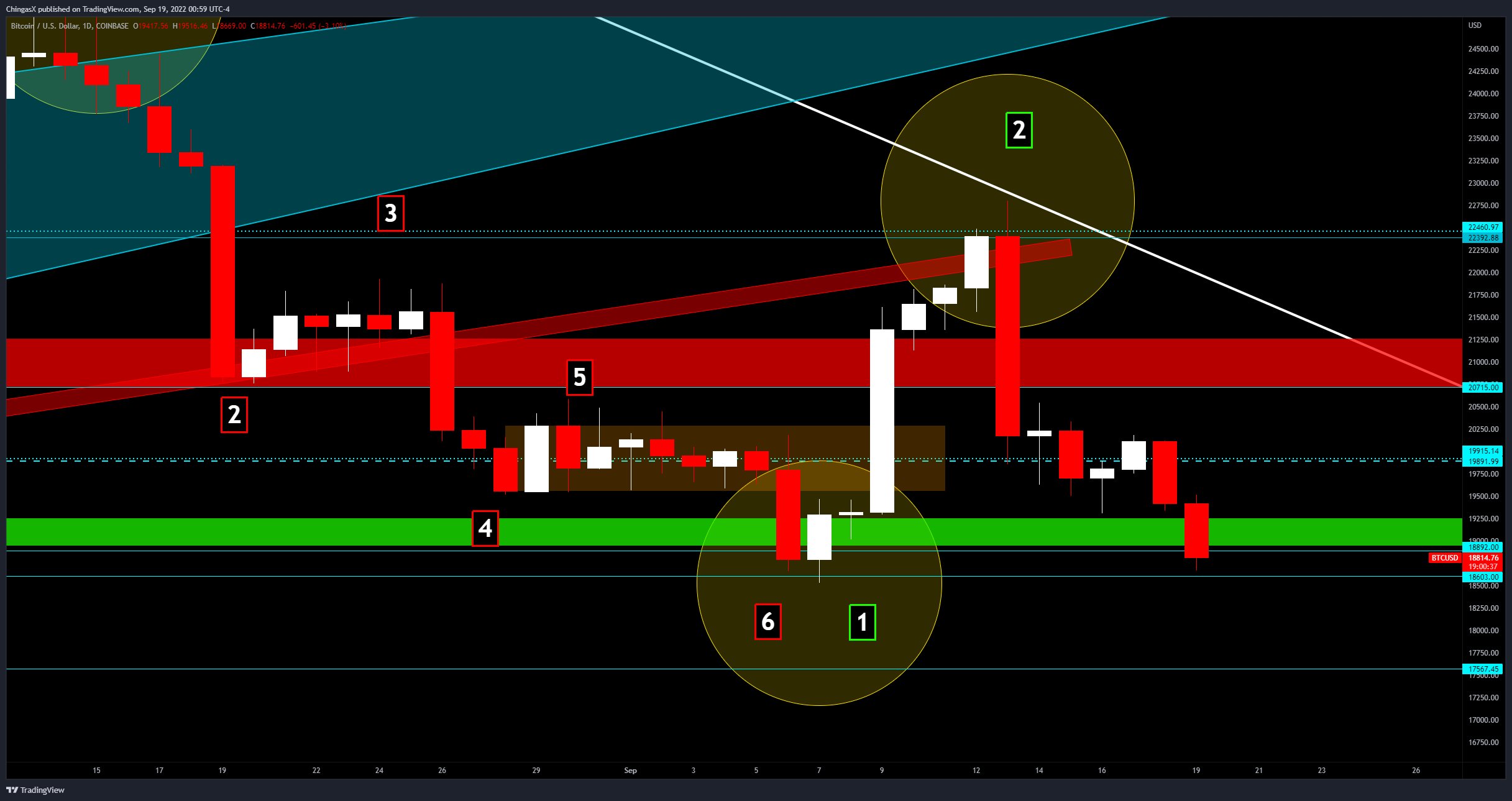 This is where things get really dicey. Bitcoin has danced this dance before and was able to work its way to a new local high. The main issue is that it took resistance directly from the much larger and much stronger downtrend stemming back to the ATH last November. That rejection confirms that trendline and ushers in a fresh validation for the Bears to keep dumping prices more and more.

Now we are back on support but we are on support AFTER taking major rejection. If that doesn’t fire the Bulls up then they are good as dead. Bulls either save this level or we just may see the bottom fall out. 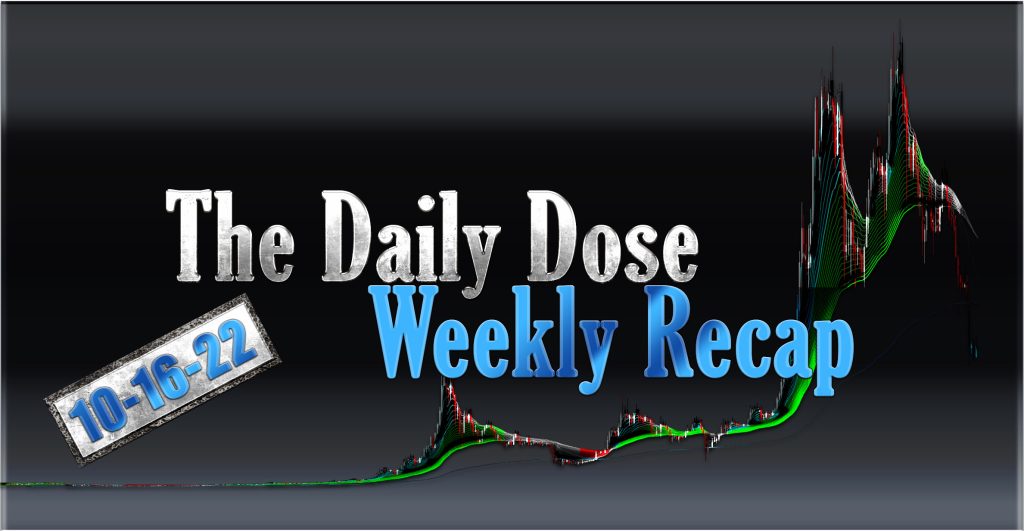 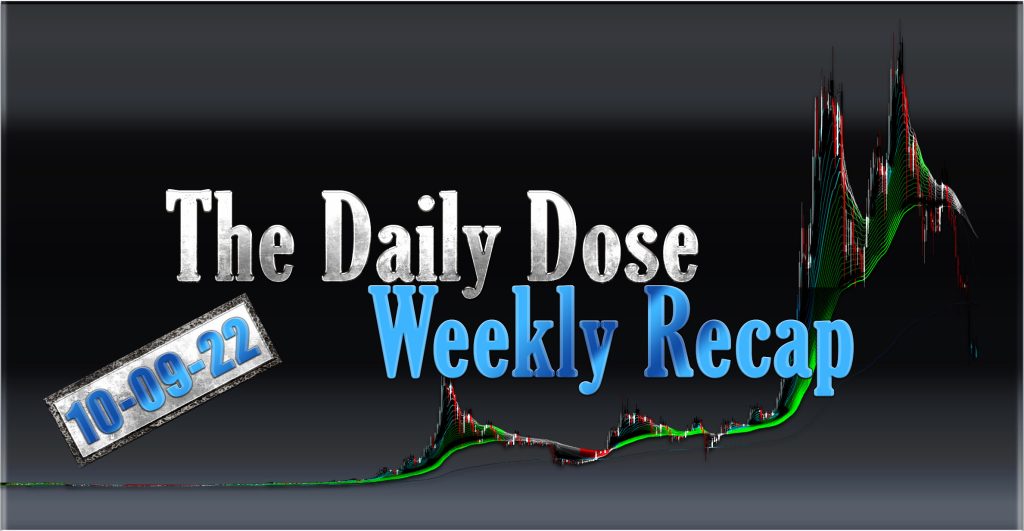 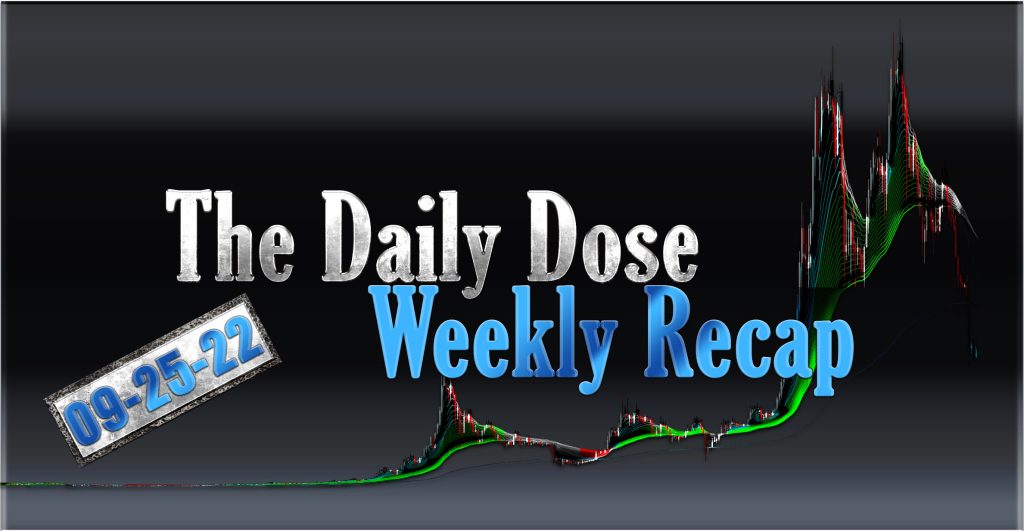 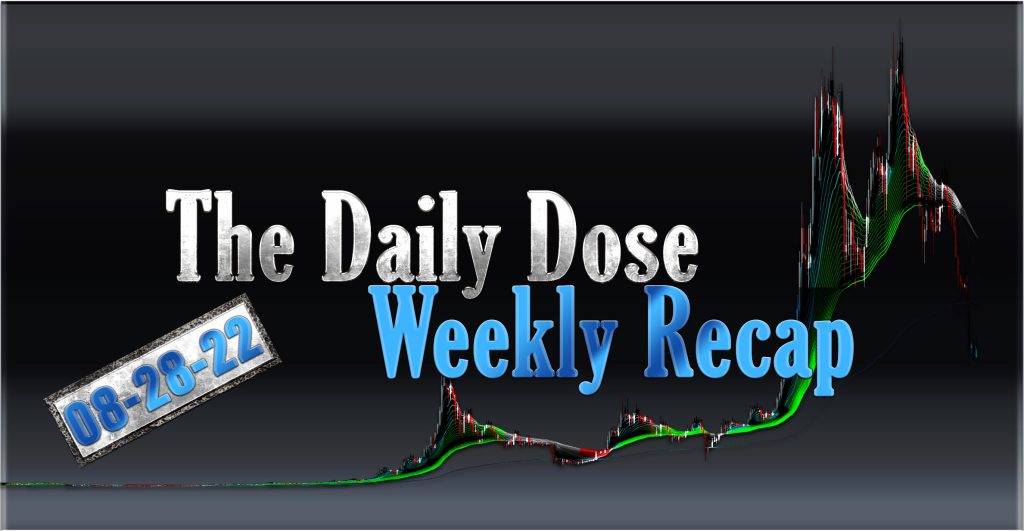