Despite the very recent bounce and potential shift market-wide, all charts remain in an area of lower support followed by current resistance. No Market Cap chart has been able to test, let alone breach, their respective Daily 50 EMA. That being said, TOTAL is again trading over its major downward-sloping resistance trendline, and they are the only one in that current configuration. 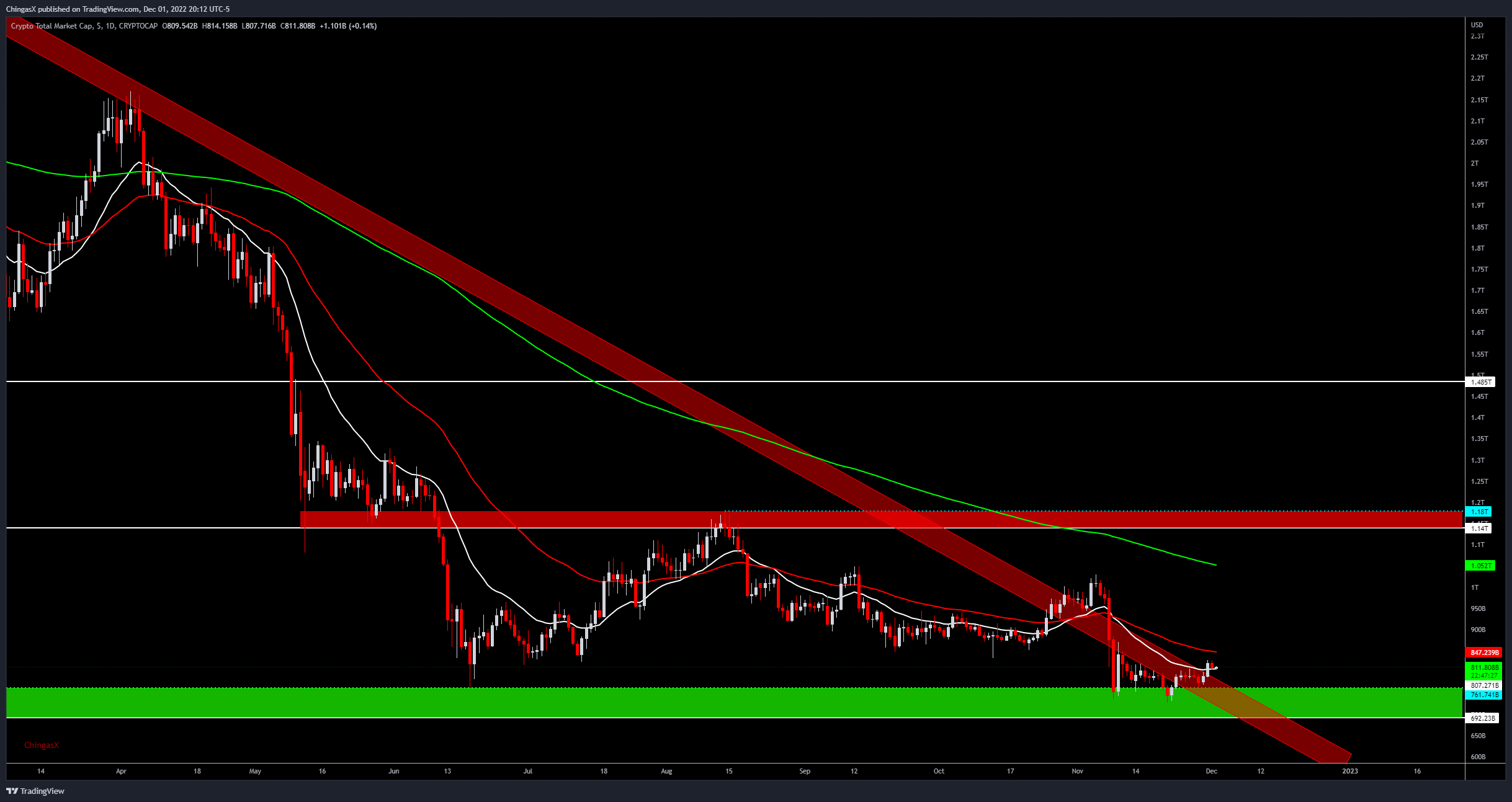 Description: Total Market Cap is the figure you get when you add up the market cap of all individual coins throughout crypto. This number comes with a disclaimer, as not every single crypto is included in this list. With over 20,000 individual token protocols, not everyone is legit. There are dead coins, scam coins, and coins that are irrelevant and artificially propped up to maintain some type of market cap. This chart, in particular, is calculated by TradingView, and the Total Market Cap comprises the Top 125 coins on the market.

Last Thursday was Thanksgiving in America and as such, the weekly report was absent. Not to fear as it would be expected that not too much would happen as markets settle down and trading volume dries up during those times. Since then, we have seen the month of November come to a close, and we have seen a few Alts making some profound statements. TOTAL has once again closed a daily candle above its Daily 20 EMA as well as the downward-sloping resistance trendline. This is a sign to look out for. Although in late October/early November, we suffered a fakeout, more eyes will be watching this crossover than last month. The reason is simple… Last month most were caught off guard. This month, more people are aware of the price action as they have seen it reflected in their wallets. 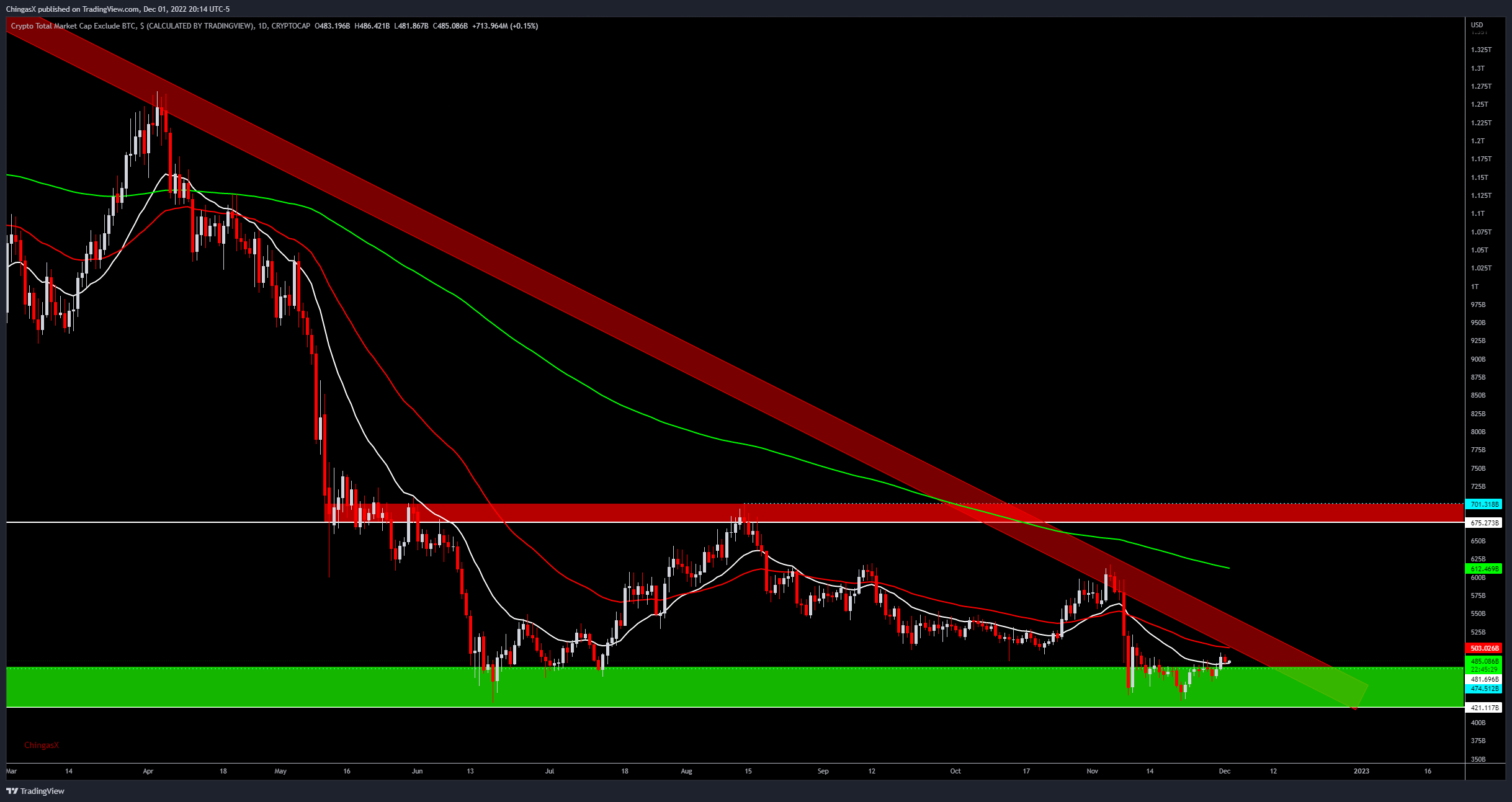 TOTAL2 has spent the better part of three weeks climbing out of its deep Support Zone. Yesterday was its first close above the zone. This is important because it came at the same time that we closed above the Daily 20 EMA. Consider it a two-for-one. If TOTAL is leading by example, then we expect to see a continuation from TOTAL2 to rise through its overhead resistance and follow a similar path as TOTAL. This means that we expect to see the greater market on a slow rise, together with Bitcoin, until the next major test of resistance. If we look at the bigger picture, we could be setting up for a test of the 200 EMA. 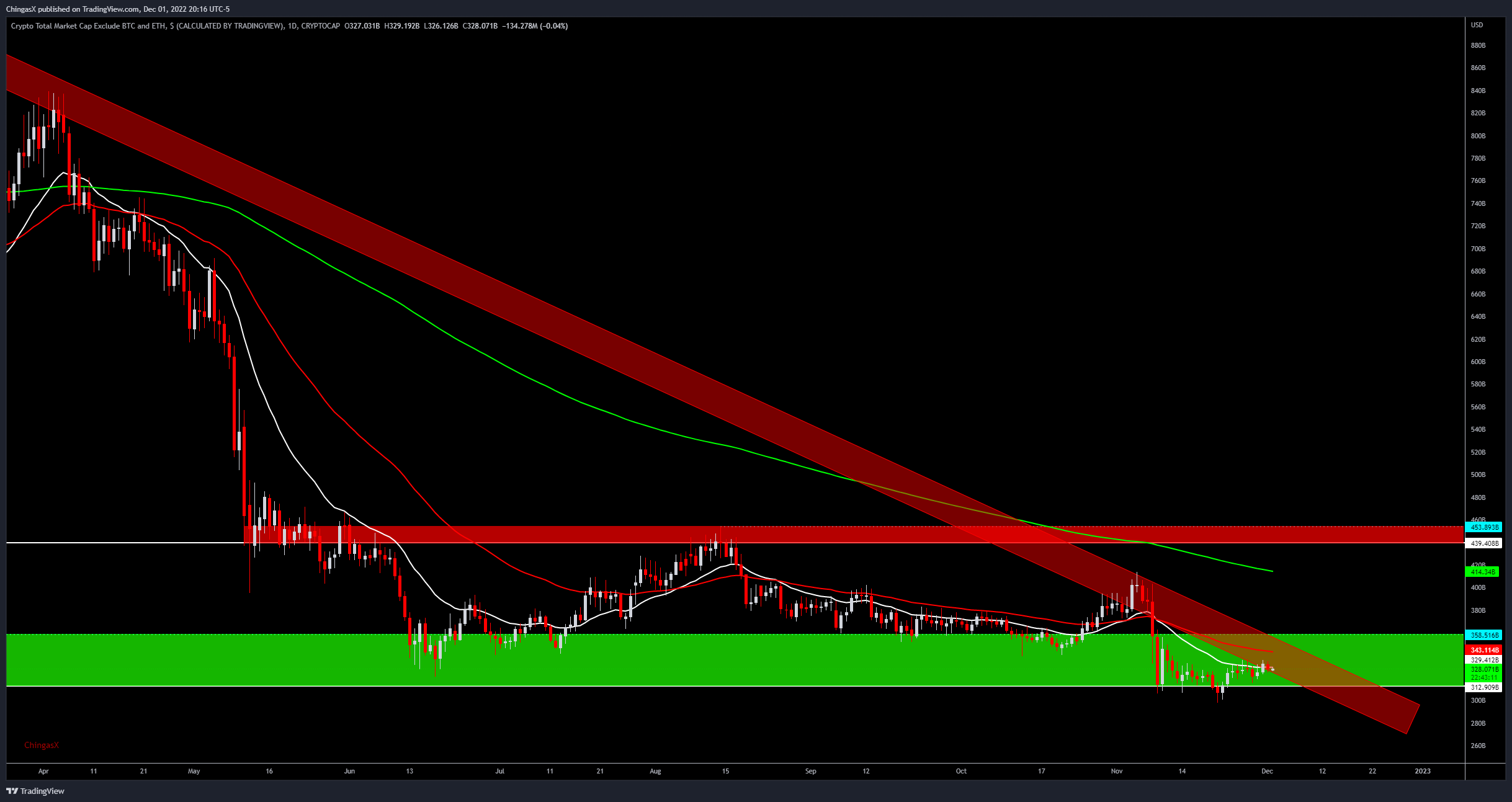 Description: Just as the chart above excluded Bitcoin from the Total Market Cap, this chart excludes Bitcoin and Ethereum. Ethereum has made its stand for the Number One Altcoin and currently enjoys a 4X in Market Cap next to its closest competitor on the list. This chart removes the two biggest players from Crypto and gives us a better idea of what the actual market is doing, regardless of what the two major players are up to.

TOTAL3 removes the two biggest players in the game and leaves us with a market treading water. TOTAL3 was hit the hardest during the collapse of FTX and is struggling to rebound efficiently. Where we have seen ETH move 10% over a few days, we are seeing some coins at the same level or lower than they were seven days ago. The mixed bag that is TOTAL3 is also struggling with the interference of their overhead resistance. With TOTAL and TOTAL2, the price navigated out of support before colliding with resistance. That is not the case for TOTAL3, and it shows. This is too early to call, but there can be a situation in which BTC and ETH run away from the market. This does not happen often, but it has in the past. 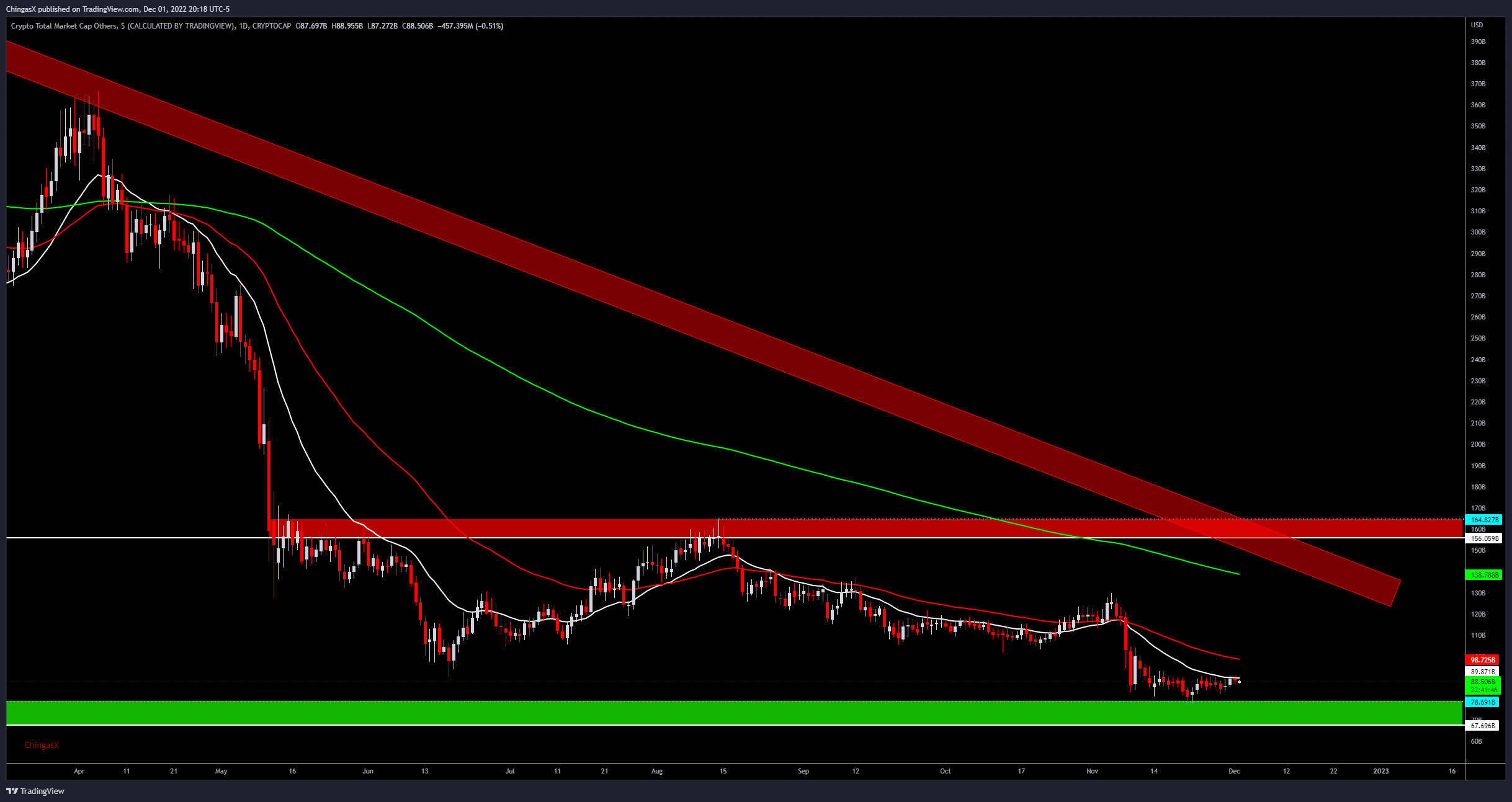 Description: In keeping with TradingViews tradition of removing coins from their Total Market Cap, OTHERS represents coins 11-125 by Market Cap. They essentially remove the Top 10 coins from their list of 125, and we are essentially left with the old Index we used for Midcaps. This does not precisely show us what mainstream Shitcoins are doing but rather the middle-of-the-road Mids that are fighting with each other to move up the list and breach the sacred T – 10.

The leftovers, or the Shitcoins as most would call them, are represented here with OTHERS. OTHERS is nothing more than the coins that occupy positions 11-125 by Market Cap. A lot of these are actually legitimate projects, but there are plenty that seems to have a value that doesn’t live up to the utility of the underlying asset. Be that as it may, we aren’t here to critique how good or bad a coin is, but rather, are they tradeable? For the market cap, yes, most of these are tradeable assets. OTHERS were the only group that did not dip into their respective Support Zone. This comes as a surprise, as these are generally the ones that dump the hardest when push comes to shove. Consider the Majors as your Bluechips and OTHERS as your high-risk penny stocks. Now, the other major difference is that OTHERS is nowhere near their respective overhead resistance provided from their downward-sloping trendline. They are MILES AWAY, in fact. In other words, they have a lot of catching up to do, and they are very much behind the eight-ball regarding positioning on the chart. OTHERS is also the only one unable to breach and close above their Daily 20 EMA. This is a red flag. If BTC, ETH, and the other Top-10 coins can manage a push above their 20 EMA, why can’t OTHERS? The biggest problem is the fall-off from good or decent projects from the Top-125 to junk. The junk is weighing down the ship and negating any gains from the higher-tier respected projects. While the war rages on between a CEX and a DEX, investors are lost as to where and what to trade. 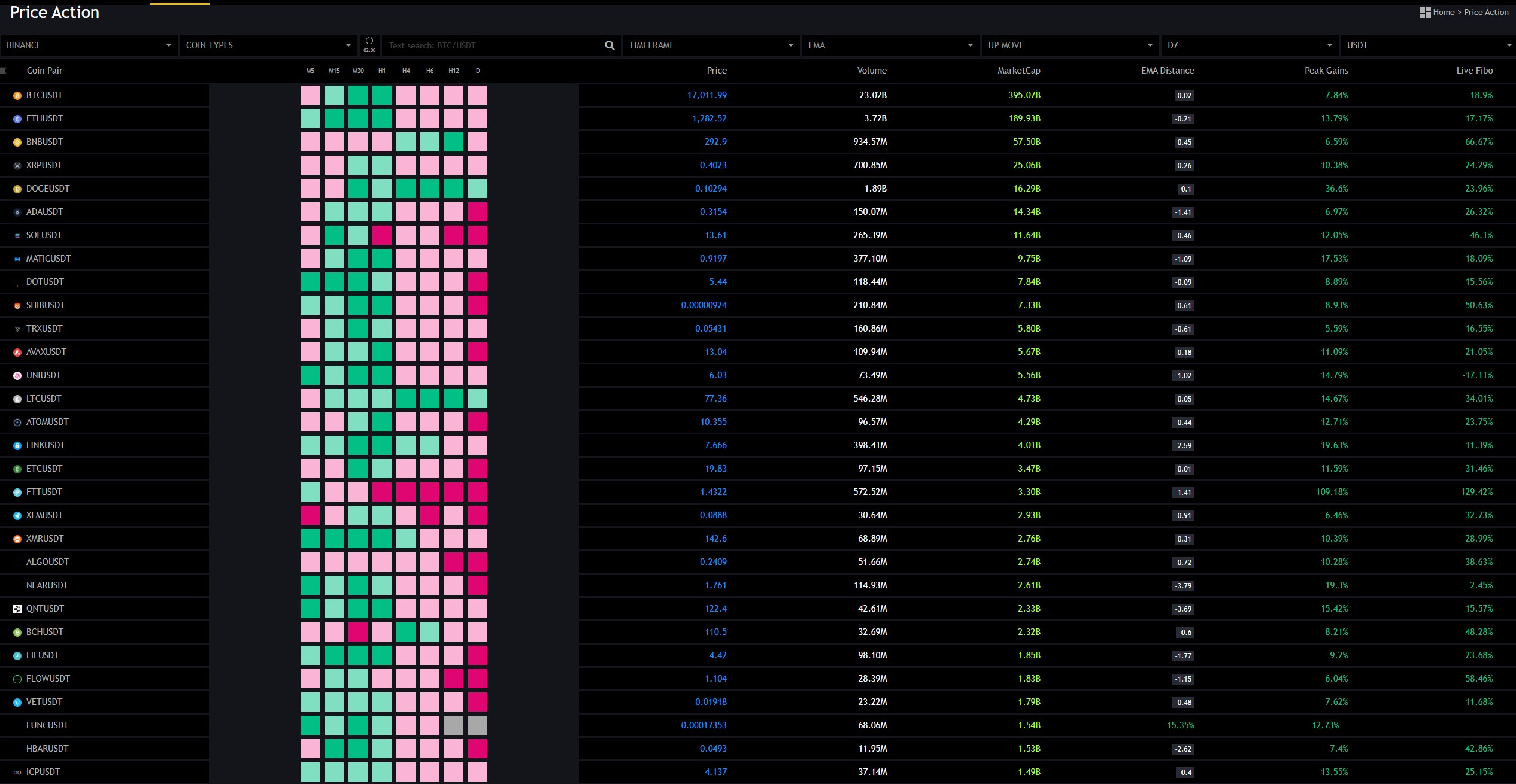 It’s good to see some Green again but approach with caution. Yes, there are trades to be made but keep in mind the overall macro conditions of the Market. No matter how strong things look, if Bitcoin takes a nose dive to 10K, no alt will survive that. All this means is to trade with caution, with proper setups, and with sound risk management.

Overall the market and everyone in it is enjoying the current relief. Relentless dumping of coins around the clock for a year straight is hard to wrap around one’s mind, but that is essentially 2022 in a nutshell. We have reached the point where we have surpassed the one-year market from the ATH. Some of the absolute best trades of all time come from recognizing stability and money flow. We like the accumulation phase. Although we have some signs of accumulation market-wide, there is still a door wide open for a massive leg down. This is why either DCA strategies or day trading with good risk management are key. DCA allows you to add to your bag and average into a position, while Day Trading allows you to take risks and trade without being stuck in long-term positions.

Either one or both are fine at the moment. Be mindful of the action if we come to test the Support levels again because if we do, we may not hold. 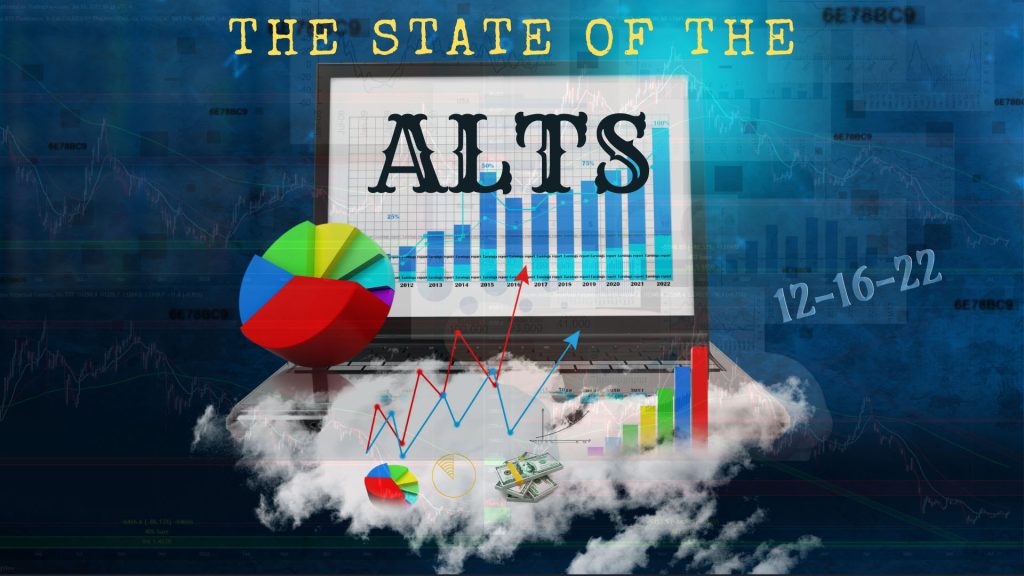 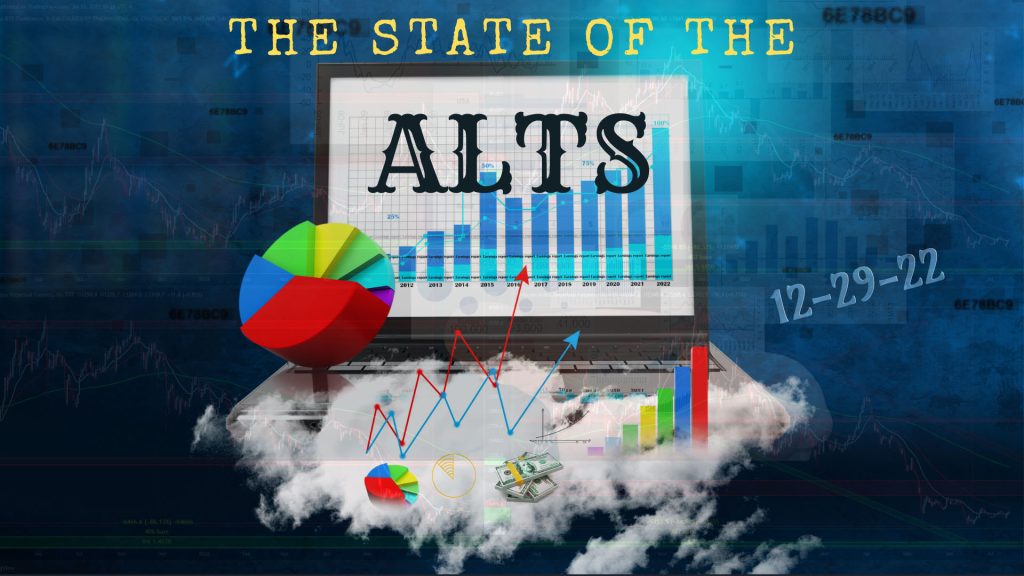 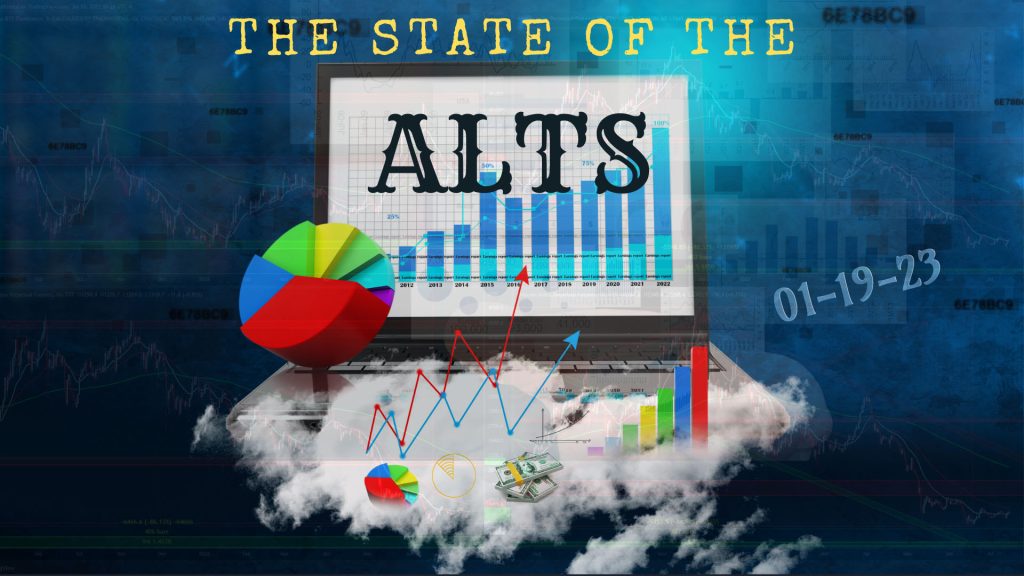 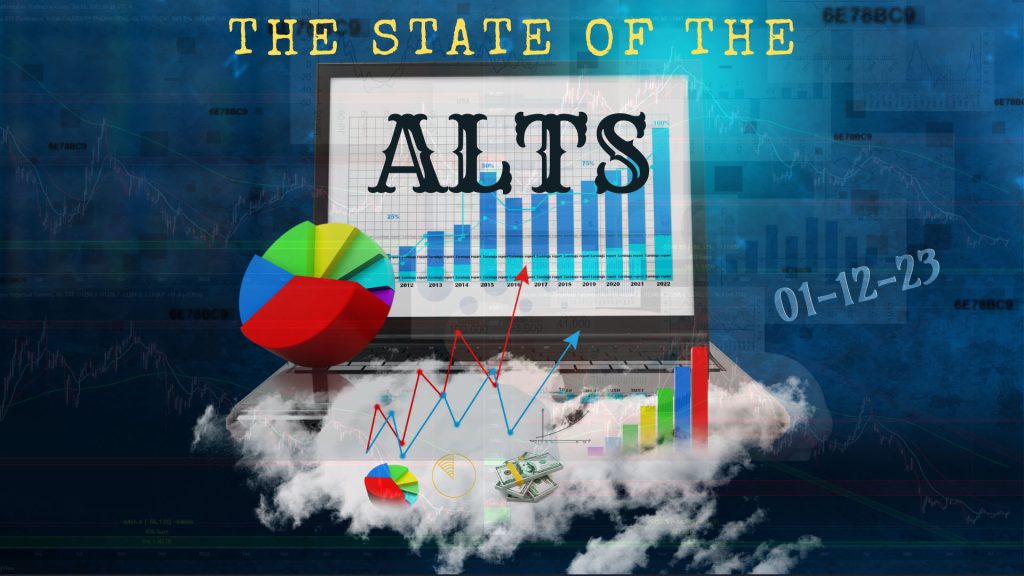 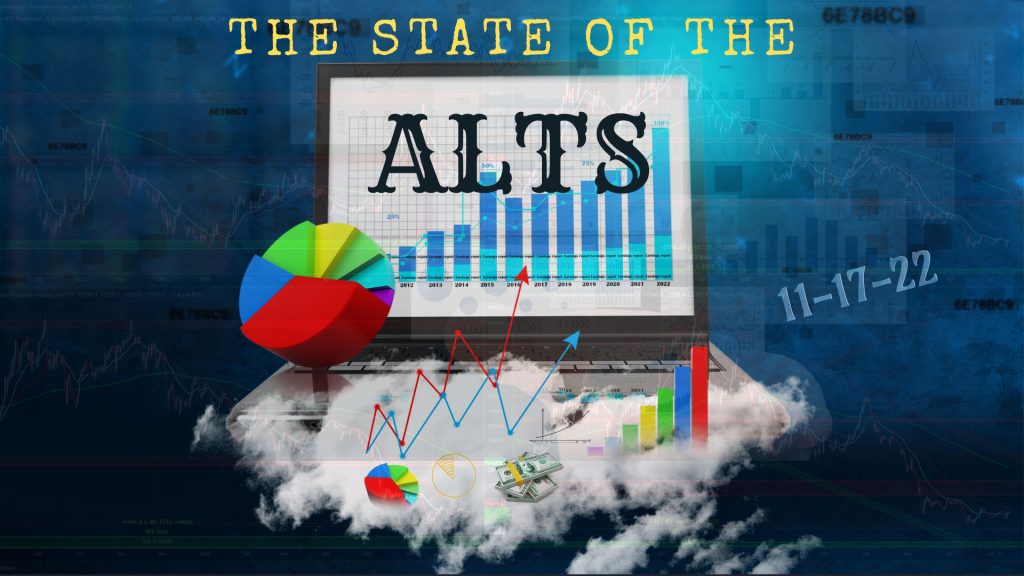