Looks like waiting for the FOMC meeting to settle down was worth the wait in putting this article together.  The market was more or less down across the board until two days ago (Wednesday).  Wednesday was also the day of the big FOMC meeting in America.  Feds looking to raise interest rates for the first time in three years.  Although that generally sounds terrible, what it means is that the economy is ready to take the band-aid off and that also means that riskier assets will see a surge in capital.  As we can see, Wednesday was a good day for Alts across the board. 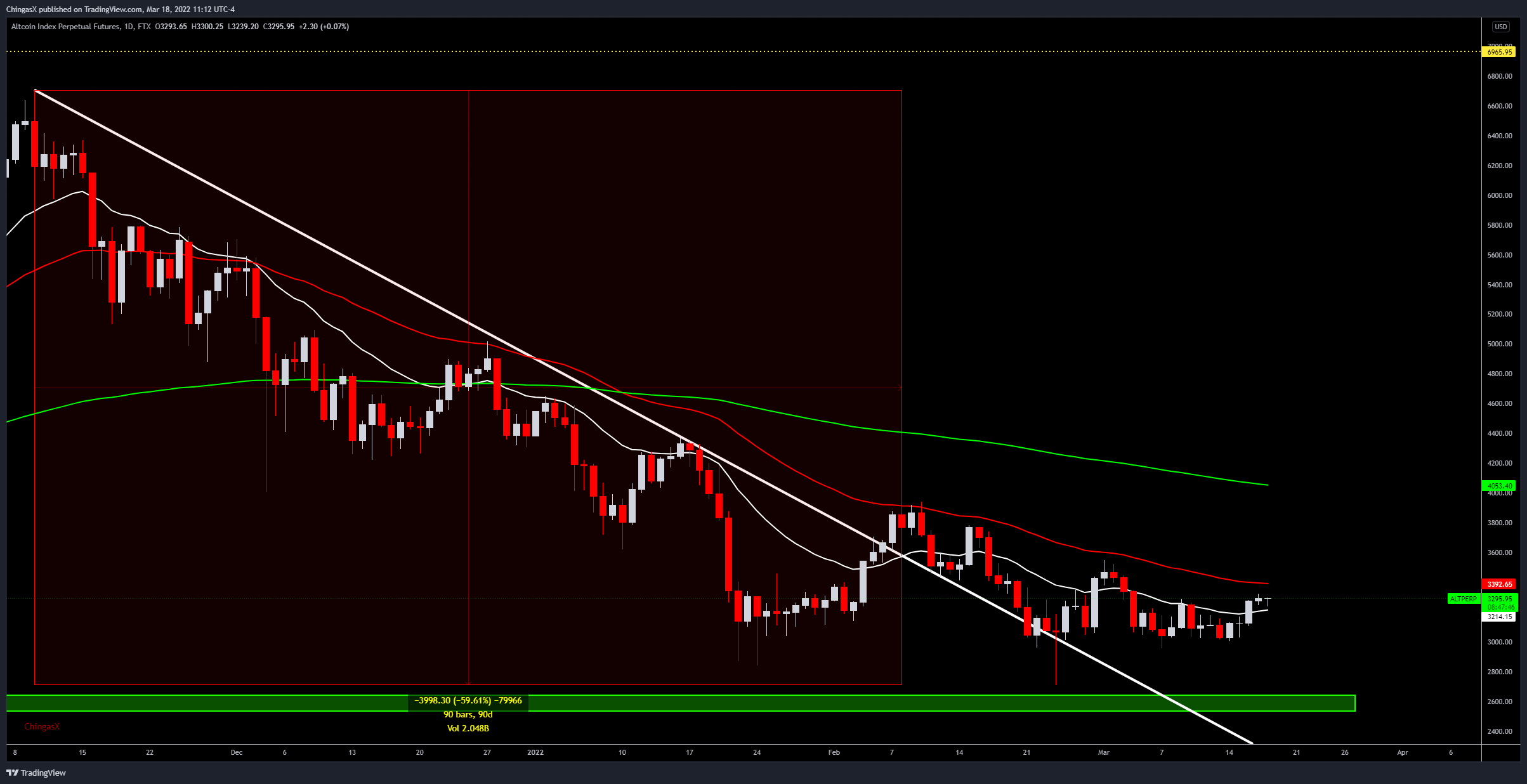 Description: Each asset in the Altcoin Index is weighted the same.  This gives a good look at a basket of higher profile and higher MCAP coins.

Starting with the Altcoin Index, we saw a near 5% move on Wednesday alone.  That move also broke through the local 20 EMA for the first time since late February.  Again, the story is told at the 50 as every time we get near it, the market fails to continue its upward trend.  ETH over 7 days is up 10% while XRP took a 6% gain and even Bitcoin is showing a positive 3% over the last 7 days. 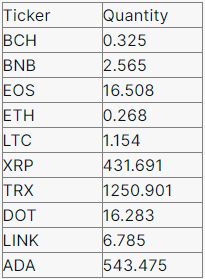 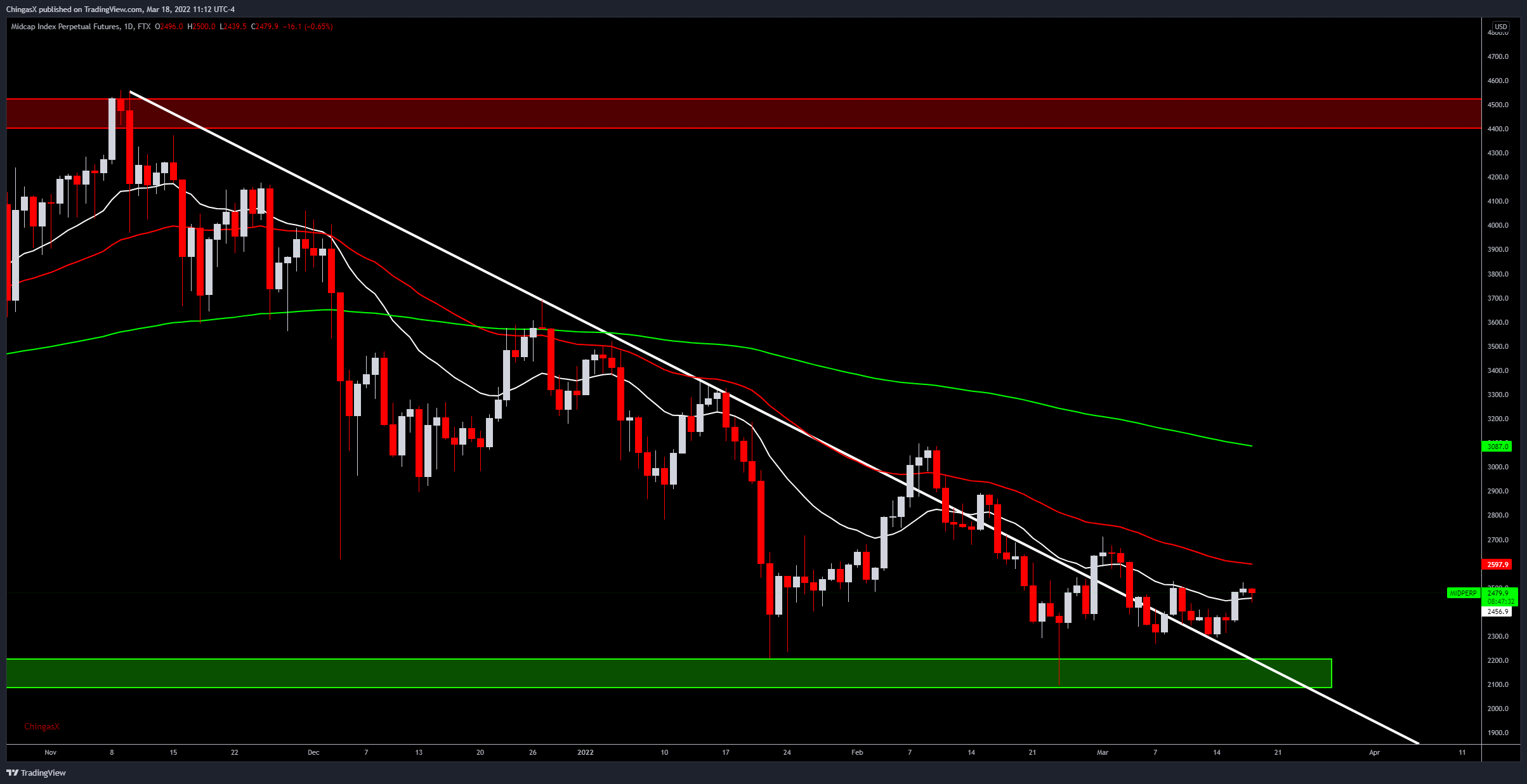 Description: This is the playground for most traders.  It’s widely excepted that the top tier Crypto have already made most of their explosive moves but that is not the case in the land of the Mids.  The Mids make a wide variety of projects from L1’s like Algorand to ad seeking marketing like BAT. 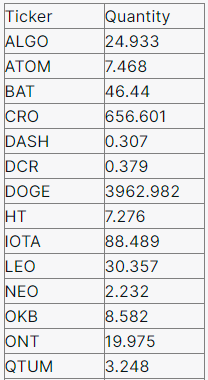 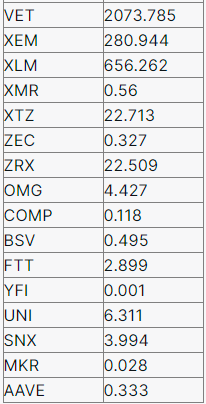 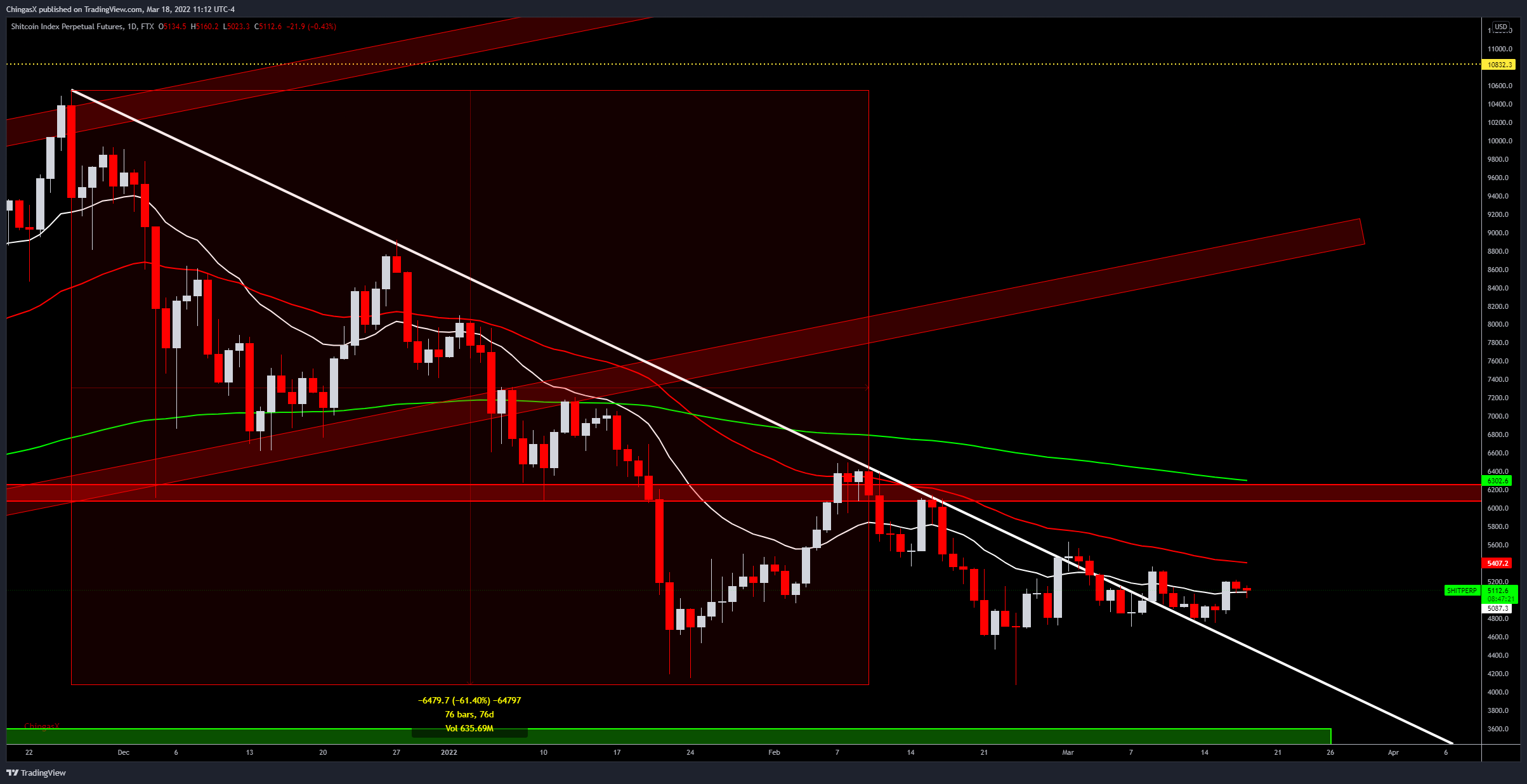 Description: What market in the world can you label a basket of assets and call them SHIT?  Only Crypto baby!  The SHITperp is your view through the window of our beloved Shitcoins.  These represent 50 coins that have relatively low market cap but still have stand out projects.  Coins like MANA, in and of itself is actually a great project with a bright future but its market cap deems it as Shit.  THETA, CHZ, ENJ, HBAR, ZEN, etc.  These projects are actually good projects with good fundamentals, so they skew the balance sheet a bit because these are not exactly the Shitcoins that some other people talk about when they talk about Shitcoins!

And then their were THREE.  Three indexes that all moved exactly the same as each other.  Wednesday broke the 20 EMA with a 6% move and has spent the last two days above the 20 just as the Altcoin and Midcap Indexes have done so far.  WAVES has been a big part of this as it has posted a 16% gain so far over the last 7 days of trading.

When we see Bitcoin Dominance going down and the Altcoin Indexes going up then we have a pretty good idea where new or recycled Capital is going.  We can easily see Bitcoin do nothing but trade sideways for a bit and allowing the USD price value to essentially stay the same or close to it while the Altcoins rally.  This allows capital to come out of Bitcoin and get traded amongst the opportunities found in Alts.  If this is the case then we can directly look at Wednesday as an “event” or a catalyst to allow traders to take advantage of “riskier” assets.

Some Alts have been bucking the system, such as LUNA and WAVES while a majority have been getting crushed since November.  We finally see some more trending coins pop up in the market and that is a good sign of things to come.  While this may not mean anything for Bitcoin at the moment, this would be an important time to focus on the Alts.

There are two coins that stand out at the moment.  One is in the midst of breaking local resistance and the other is receiving a ton of new volume.

KNC has been on the move but it was always a low volume Shitcoin.  That Volume is heating up now and making it easier and easier for larger players to get involved on the action.  KNC has pushed the 618 from the ATH but it has failed twice around the same level.  The fact that it failed and has since fully recovered can give it hope to continue to the 786 and eventually retest the High at $4.36. 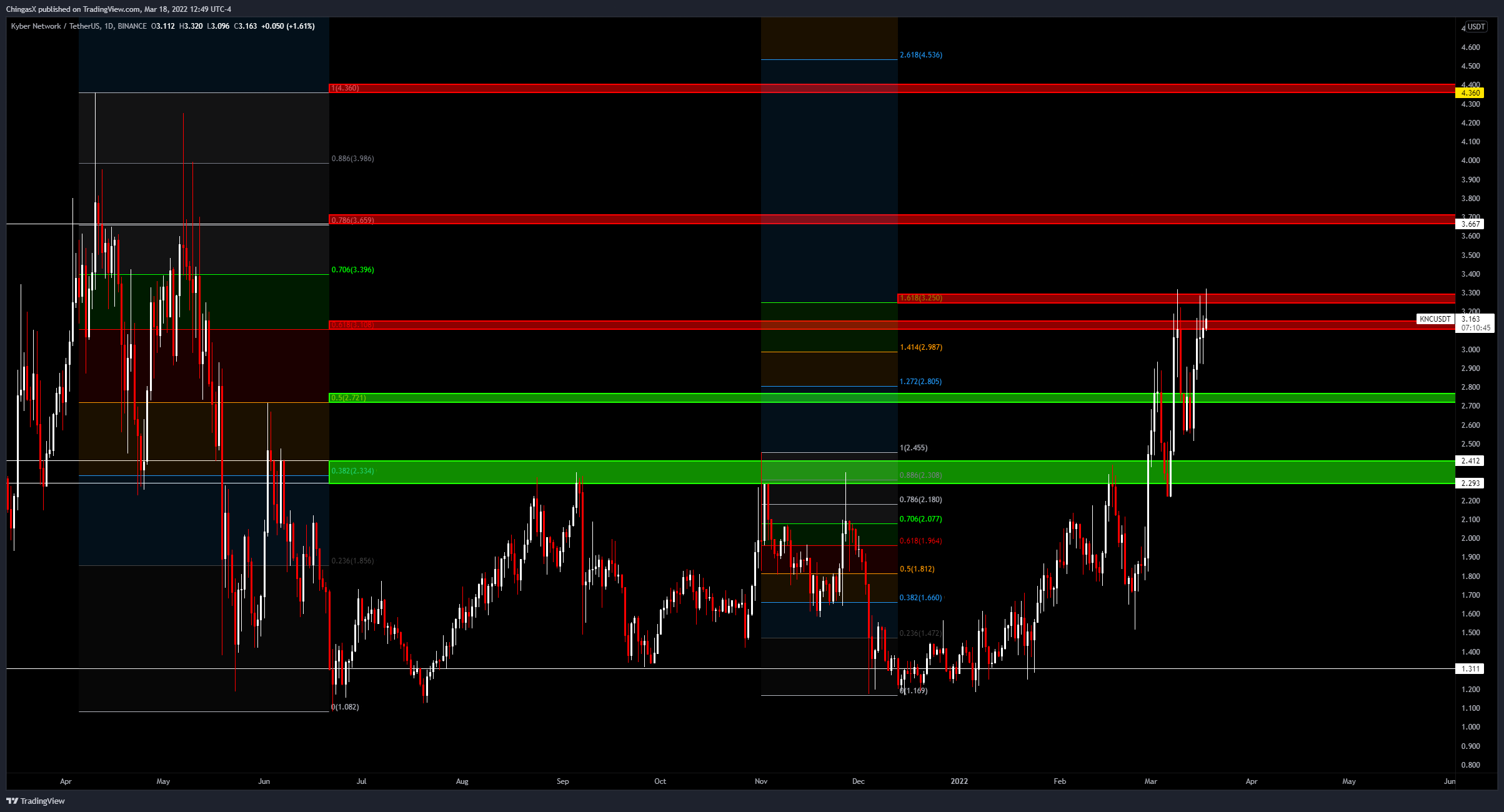 WAVES was discussed last week and for good reason.  We did indeed get a move down to $25 and since then we have reached a high near $32.  We are still looking for some action around $34 and then we can investigate further whether WAVES has what it takes to retest it’s current High at $41.86 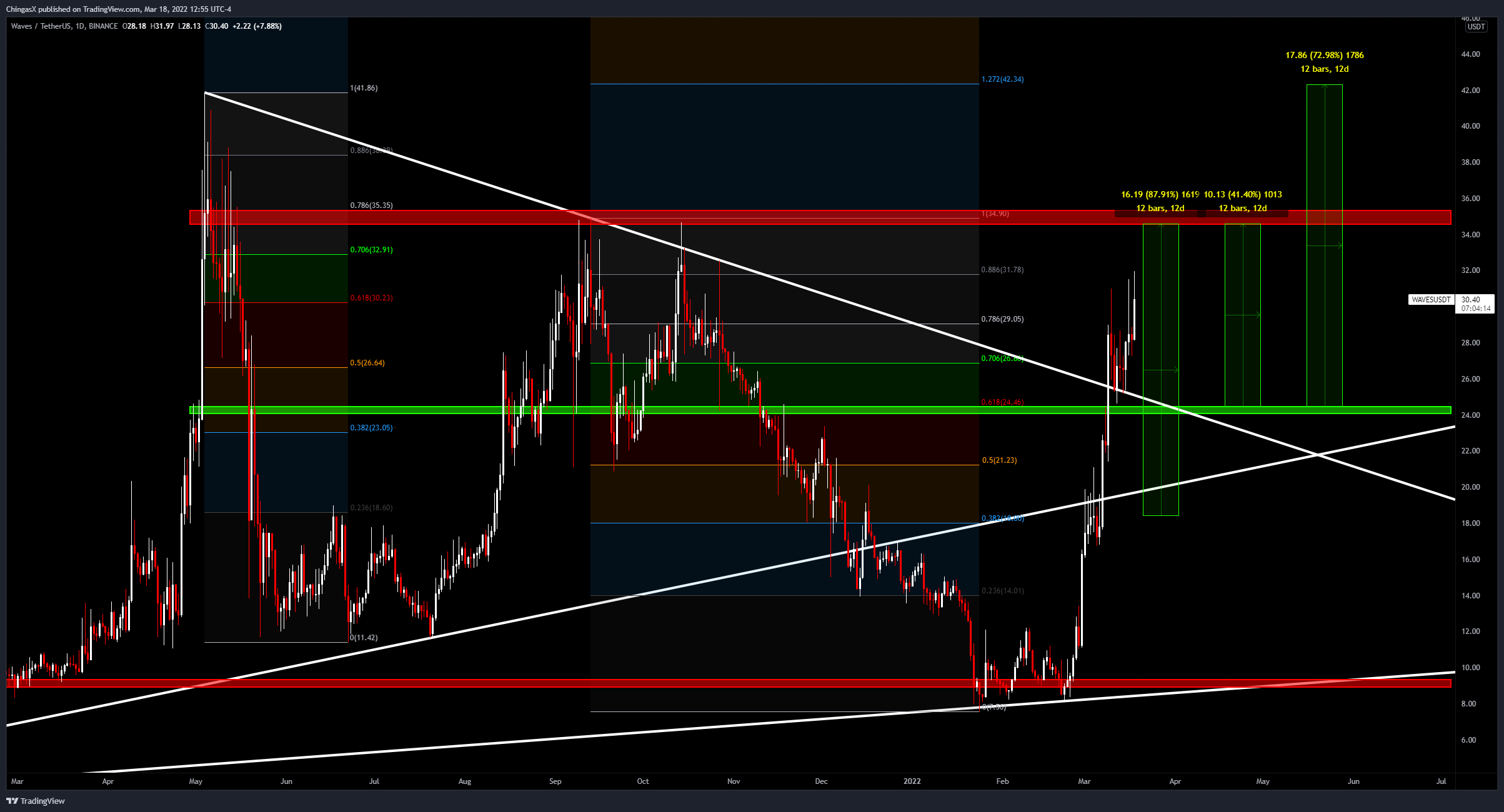 Best case scenario, we see a run in Alts – worst case scenario, this is nothing more than a fakeout market wide and we have much further to drop overall but we will see some Alts buck the system from time to time.

I prefer to believe the first but one thing that is really important in trading is to remove your emotions and never let your Bias get in the way of your analysis. 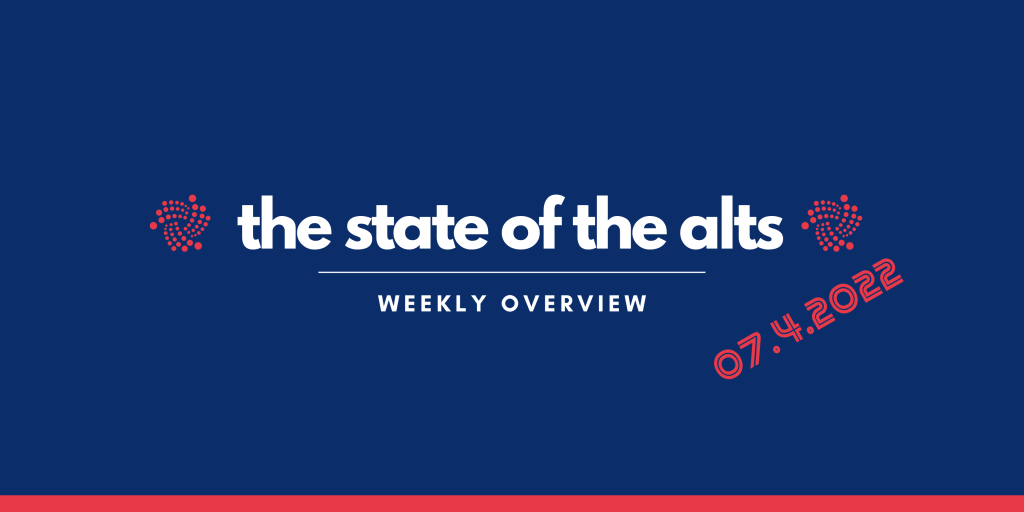 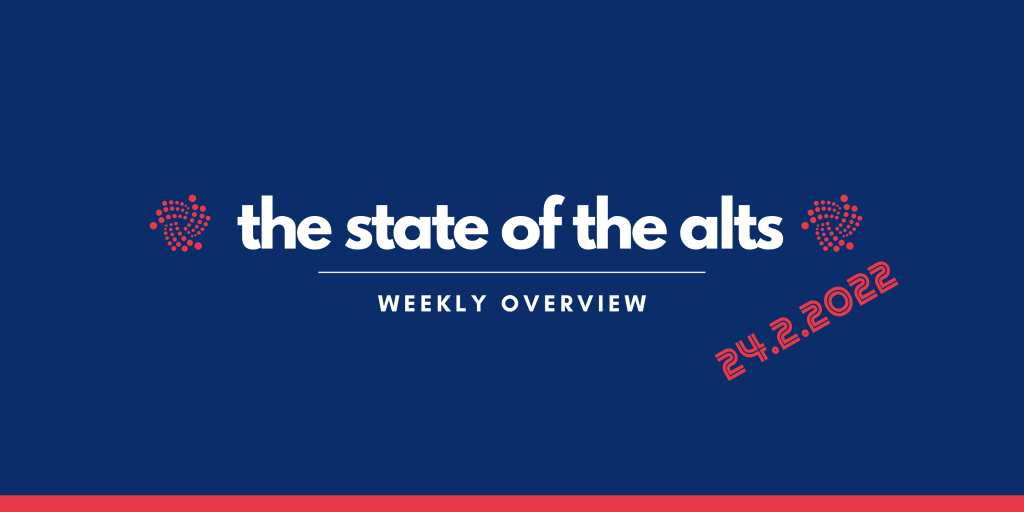 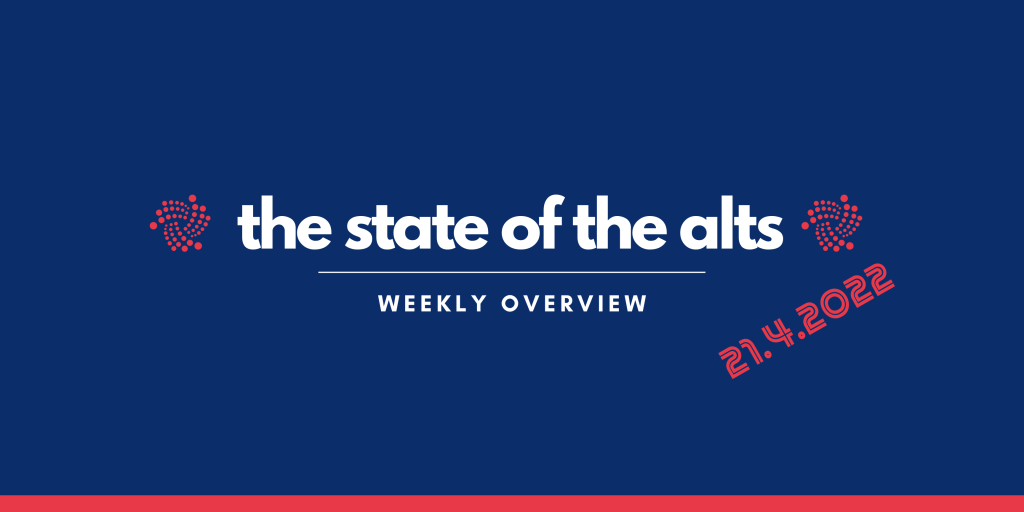