What is NEAR Protocol?

NEAR Protocol: is a layer-one blockchain that was designed as a community-run cloud computing platform and that eliminates some of the limitations that have been bogging competing blockchains, such as low transaction speeds, low throughput and poor interoperability. This provides the ideal environment for DApps and creates a developer and user-friendly platform. For instance, NEAR uses human-readable account names, unlike the cryptographic wallet addresses common to Ethereum. NEAR also introduces unique solutions to scaling problems and has its own consensus mechanism called “Doomslug.”

NEAR Protocol is being built by the NEAR Collective, its community that is updating the initial code and releasing updates to the ecosystem. Its declared goal is to build a platform that is “secure enough to manage high value assets like money or identity and performant enough to make them useful for everyday people.”

Flux, a protocol that allows developers to create markets based on assets, commodities, real-world events, and Mintbase, an NFT minting platform are examples of projects being built on NEAR Protocol. – CMC

NEAR has had a very interesting run over the last year.  When most Alts were making new ATHs in May of 2021, NEAR failed to eclipse the ATH it made earlier in the year in March.  That failure led to a 78% drop in NEARs value in a downtrend that went on for 66 days.

NEAR did pull through and did go on to make another new ATH in September and then once again just before Halloween.  This price action was more in line with Bitcoin going from 65K to69K in the same time span.

The ATH on October 26th, also the same day we wrote about NEAR HERE – NEAR went on to lose 53% from that ATH in yet another local downtrend that took over 39 days.

Now we can see NEAR pushing those original targets and getting aggressive on the Buy side of things. 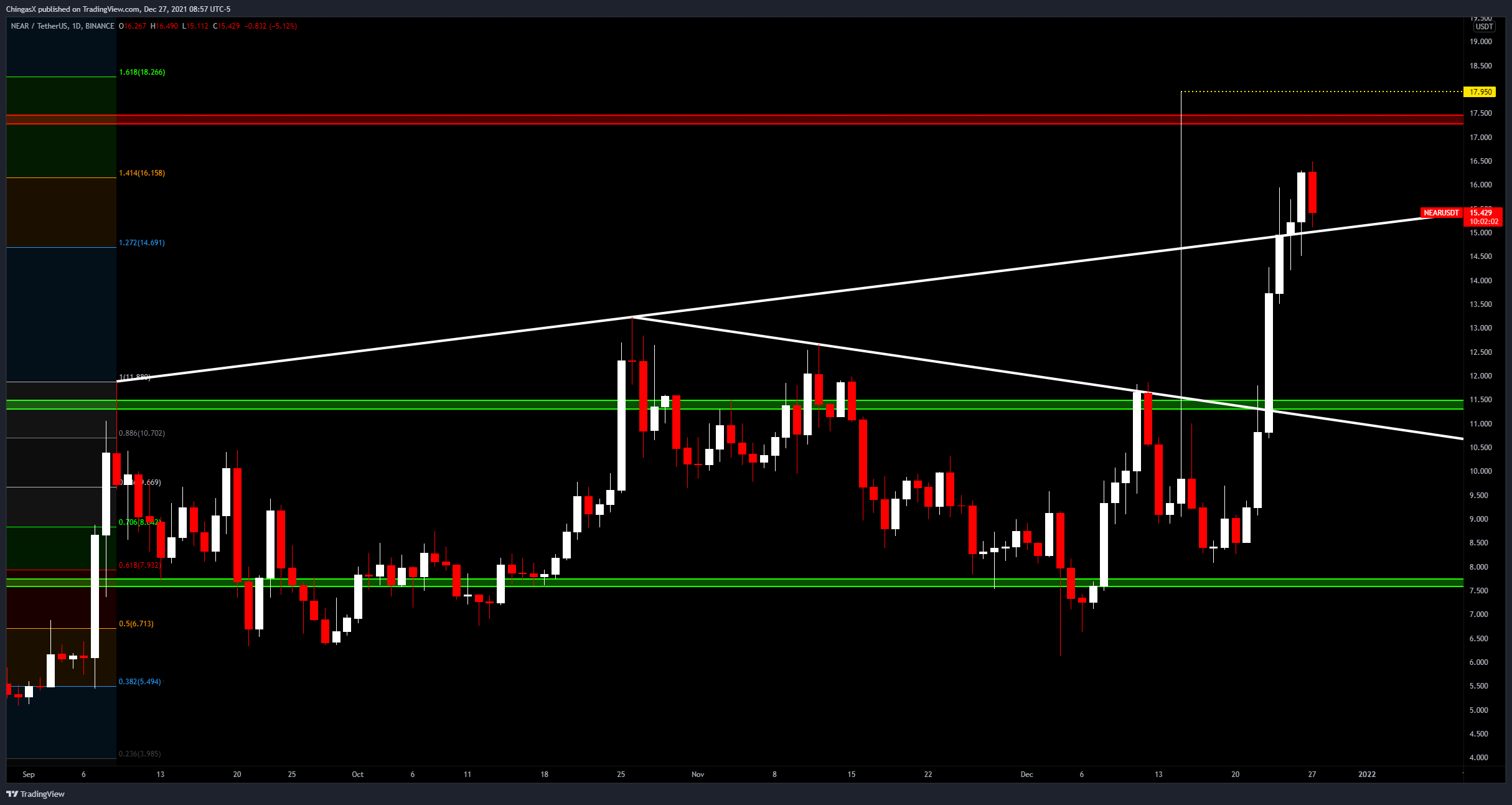 NEAR has broken an upper resistance trend and has also successfully flipped the trend as Support.  This trend may not hold has it only has two touches prior to the break.  If that is the case then we are looking to see NEAR fall back to either the recent Highs or fall all the way back down to retest the trend that NEAR broke out of.  This is unfortunately a large range but with strategic laddering on buy ins, it still makes for a speculative play.

$13.24 to $12.33 is the initial zone.  This area is used when the asset gets really Bullish, really quickly and shallow dips are all we receive.  Being that NEAR pushed 91% in 6 days, we can say that we are more likely to see shallow dips than larger dips.

The second zone will dynamically change over time.  The trend from the previous ATH to all of the failures to break that high.  $11.17 is the mark for today but everyday that will drop as it follows the trendline. 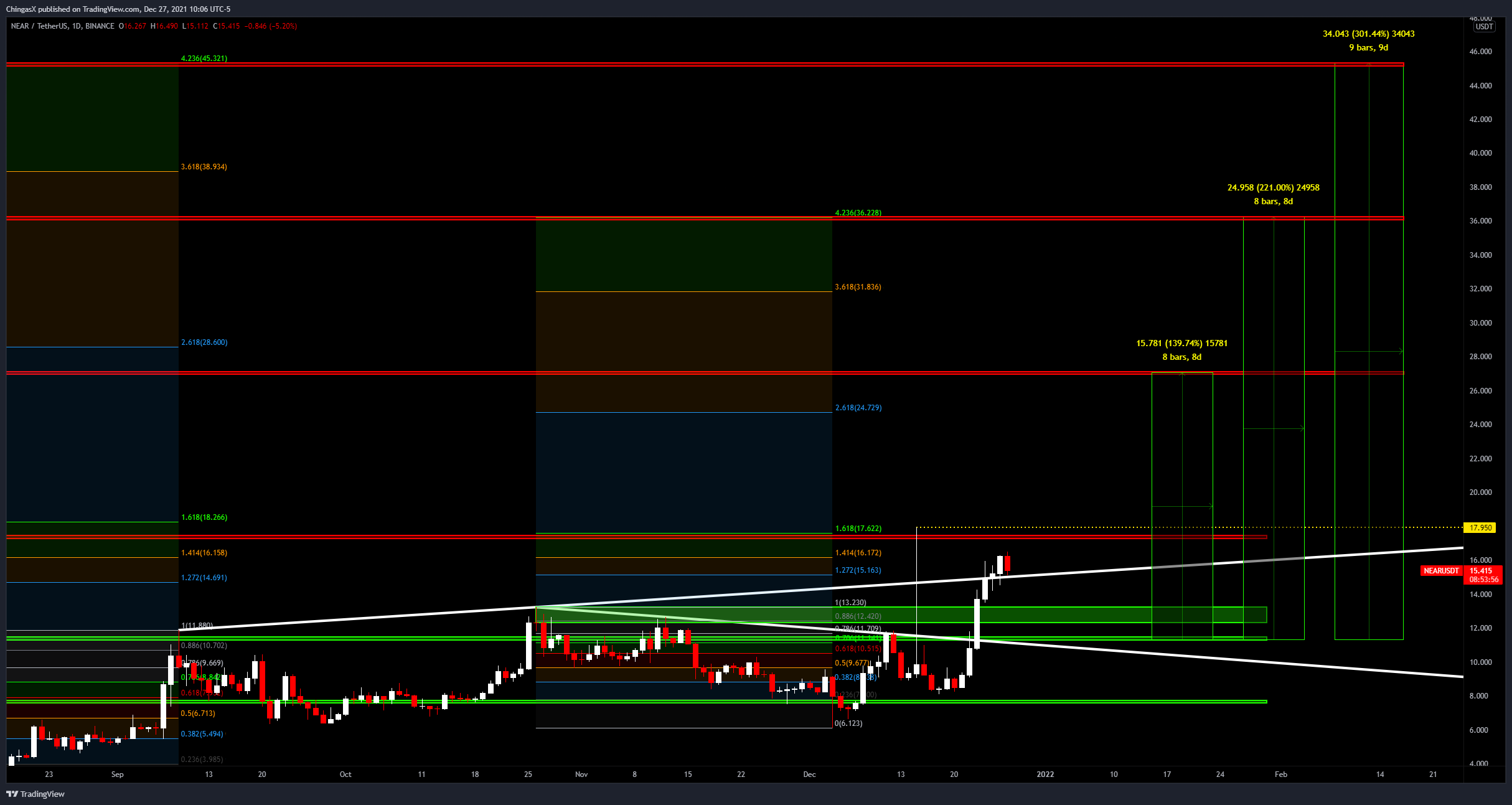 Of course, the really fun part is talking about the possible profit targets.  Once again, NEAR is in Price Discovery.  There are a few methods to try and find potential resistance areas out there in the free world and we have come up with a few levels that we think traders and investors will be eyeing up to take profit.

We have already hit our original $17.34 level on a spike but we currently remain under that level for now.  After $17 we are eying up $27 in a way will complete one full cycle of profit taking but there is more price action to consider.

In the case of an explosive run and a full leg of action, we can see NEAR pushing $36 and then $45 and still have a chance to go even further after those.  Buck-up because NEAR has the potential to push a 300% move if everything goes right!

Newest | Active | Popular
See all
Can NEAR pull a 3X from here?