The Curse of the BITO ETF is now Over 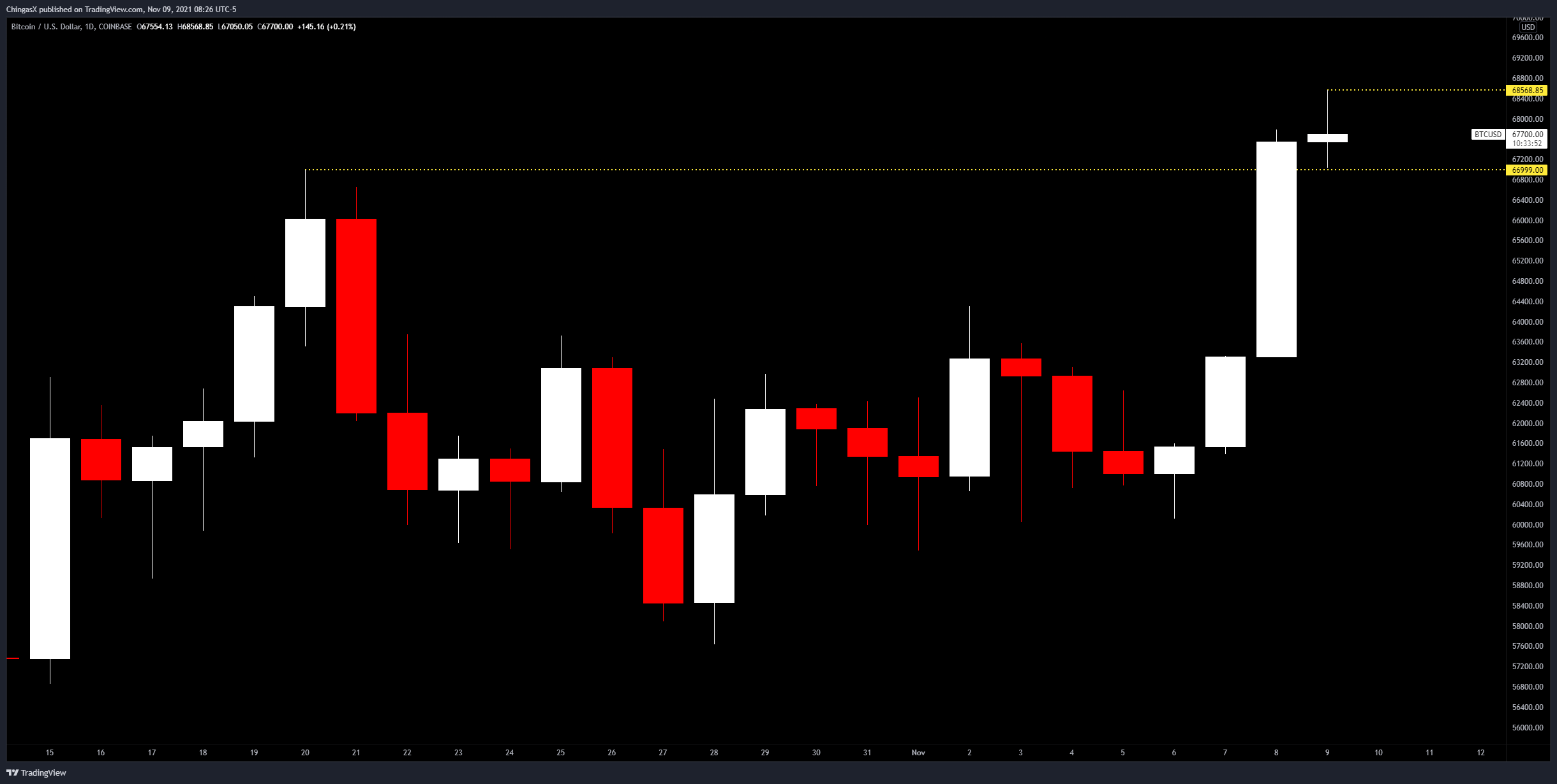 When the CME Futures first came out, it was the day after Bitcoin posted its 20K ATH.  That would remain the ATH for 1080 Days when finally, on December 1st, 2020 Bitcoin traded above $19,891.  However, it took the CME Futures another 16 to finally break its LISTING High.  So, yes, it’s safe to say that the CME Futures destroyed the Bitcoin Rally of 2017 and crashed the market. 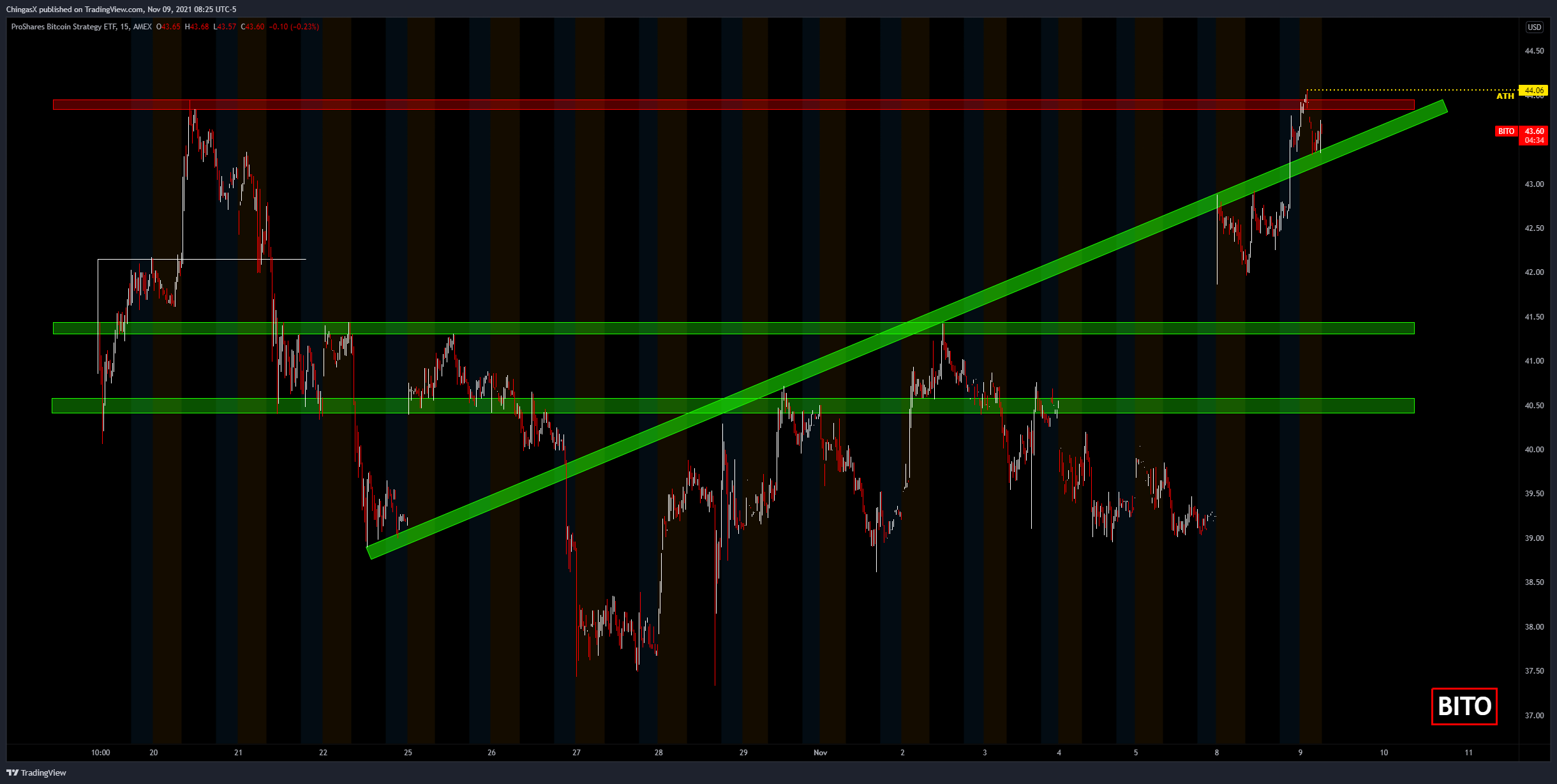 Now here we go again with BITO – the world’s first Bitcoin ETF.  BITO launched on October 19th, 2021.  The Bitcoin ATH of $66,999 was on October 20th, 2021.  I would be lying if I said the thought didn’t cross my mind that BITO had the potential to destroy the Bitcoin market just as the CME Futures did 4 years ago.  The Daily Candle yesterday put that thought to bed as Bitcoin traded above $66,999 – removing the potential ETF Curse. 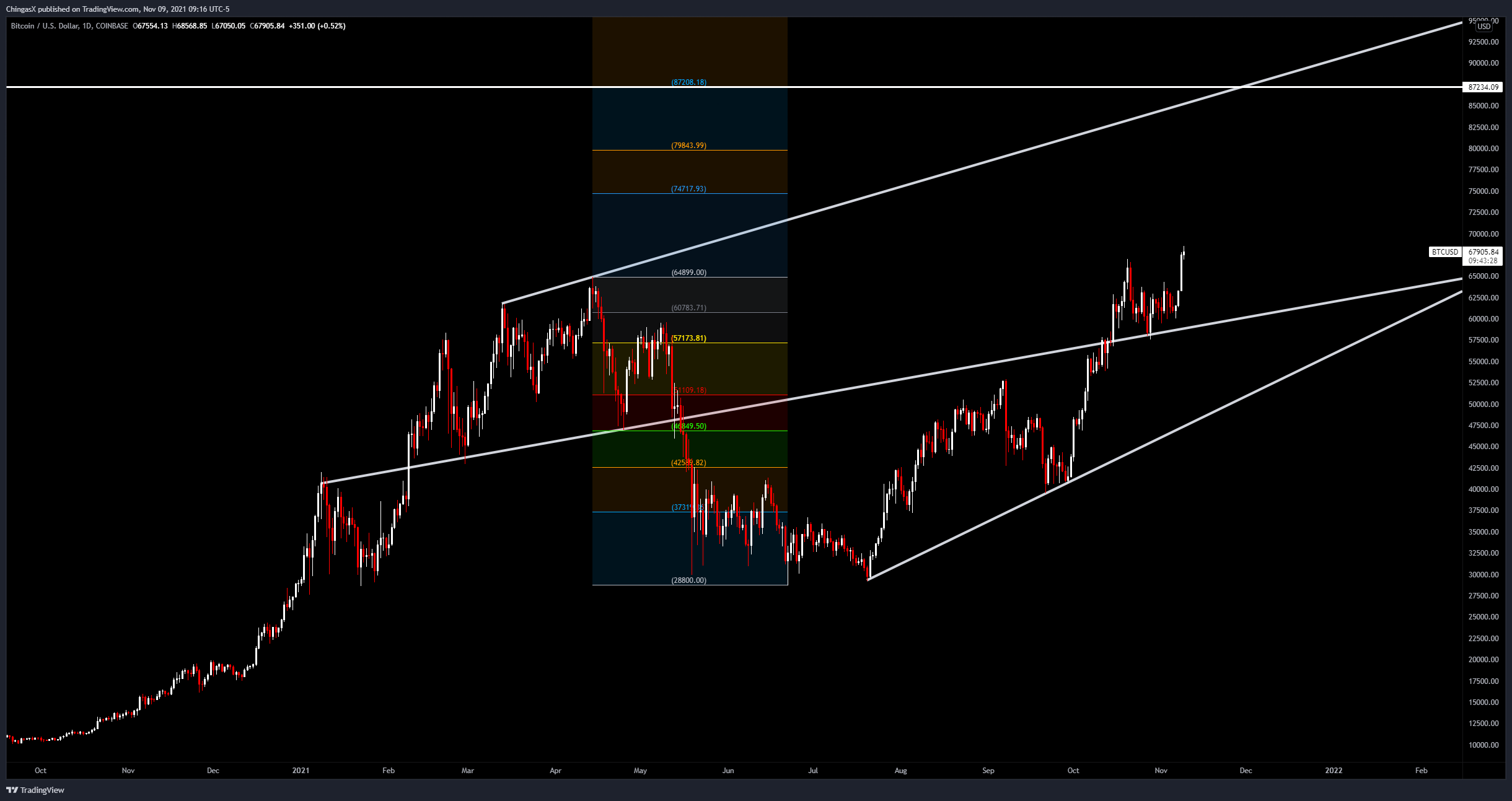 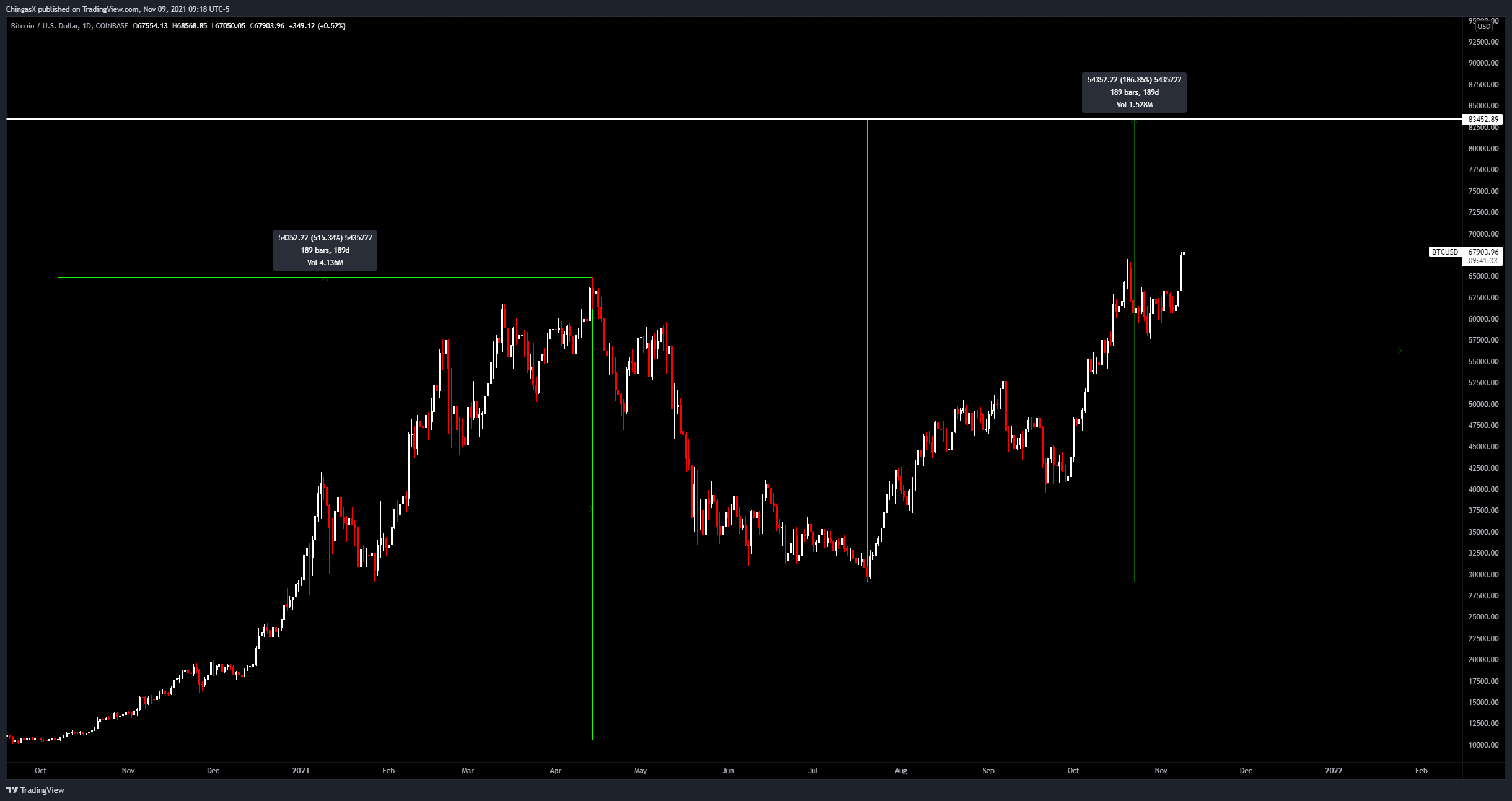 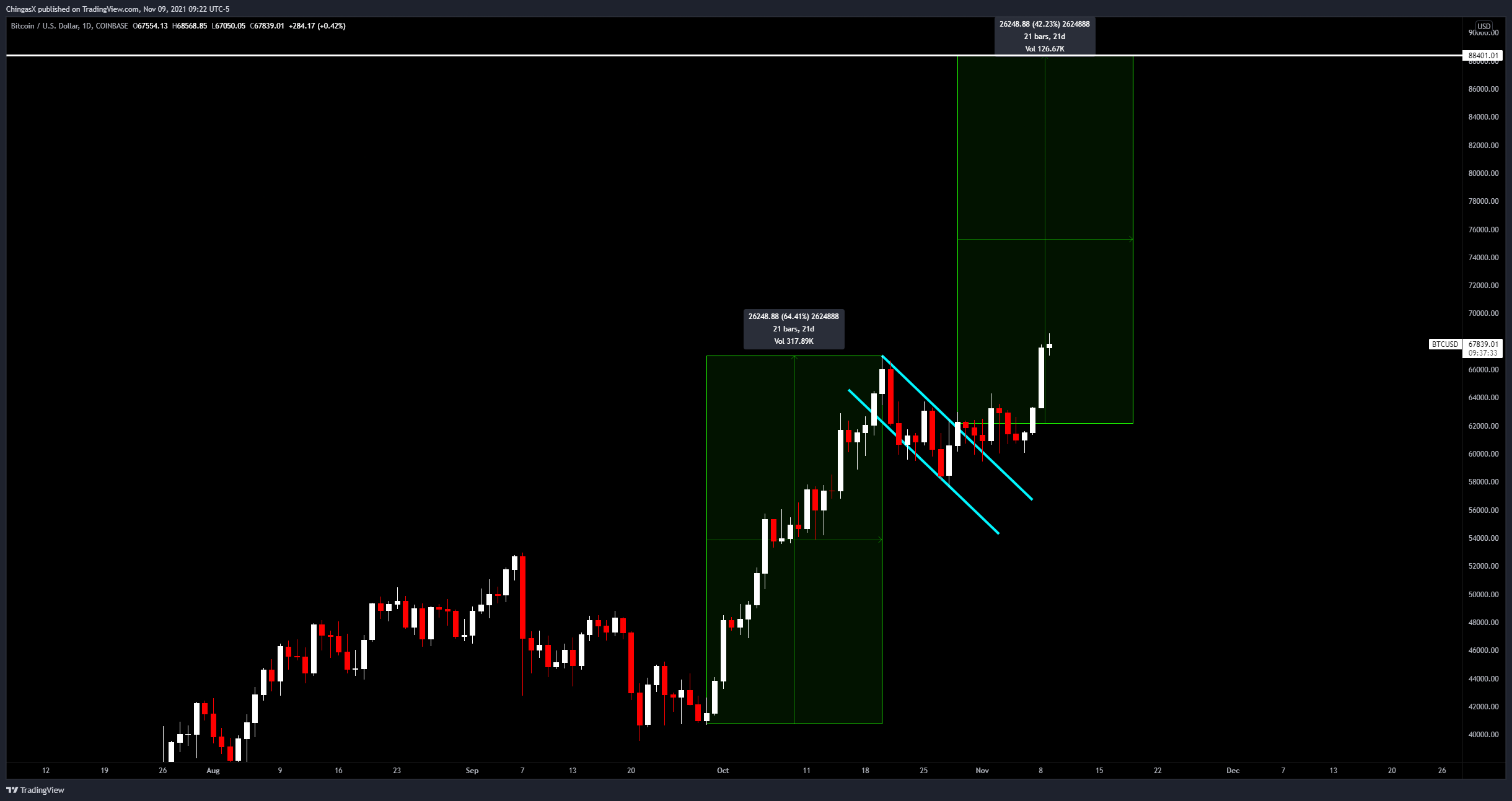 Bitcoin is now back in Price Discovery.  This means uncharted territory and the glass ceiling is officially broken once again.  This is when Fibonacci Extensions and Patterns can really help a trader out as he tries to find the next logical area of potential profit-taking.

We can see three different scenarios that range from $83K – $88K.  We can also consider $75K and $80K as “psychological levels” where there is likely to also be some traders peeling a little off the top.

LRC on the Move and Litecoin back in the conversation!

Yesterday we talked about $2.04 being the next area that we liked.  Well, LRC liked it too.  We have already seen a backtest onto the $2.04 area and we have found support for now.  $3.20 becomes the next focal point if LRC can continue this upward parabola. 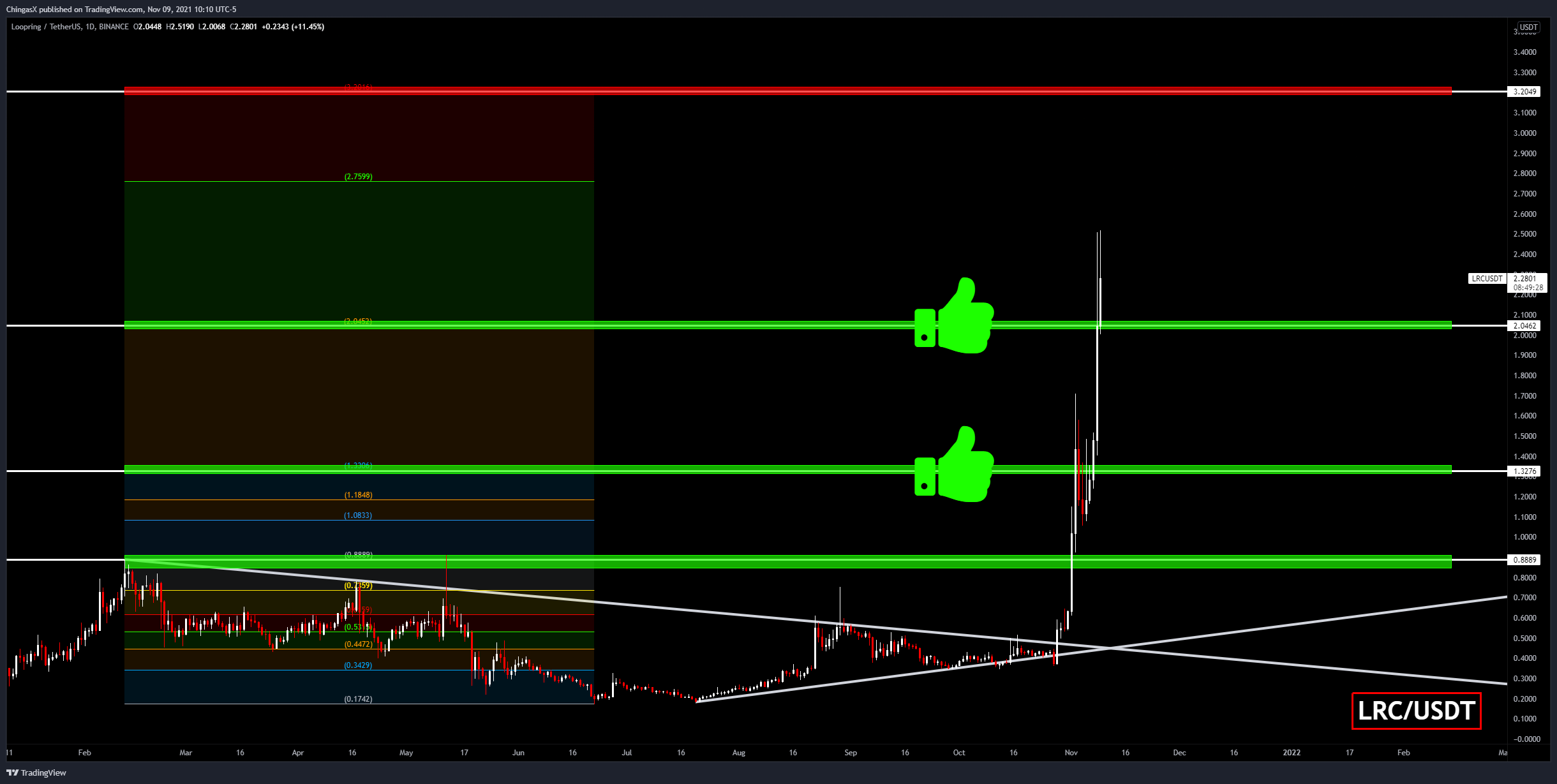 LTC: The cryptocurrency was created based on the Bitcoin (BTC) protocol, but it differs in terms of the hashing algorithm used, hard cap, block transaction times, and a few other factors. Litecoin has a block time of just 2.5 minutes and extremely low transaction fees, making it suitable for micro-transactions and point-of-sale payments.

It would appear that Bitcoin has sparked a renewed interest in Litecoin.  Unlike a lot of these other coins we have been talking about, Litecoin is actually down 34% from its previous ATH set earlier this year in May.  Litecoin has a lot of challenges in front of it, including Weekly Historical Levels, local Fibonacci levels, and pure Price Action Support and Resistance.  If Litecoin is to make a run – look for this to clear $500 easily. 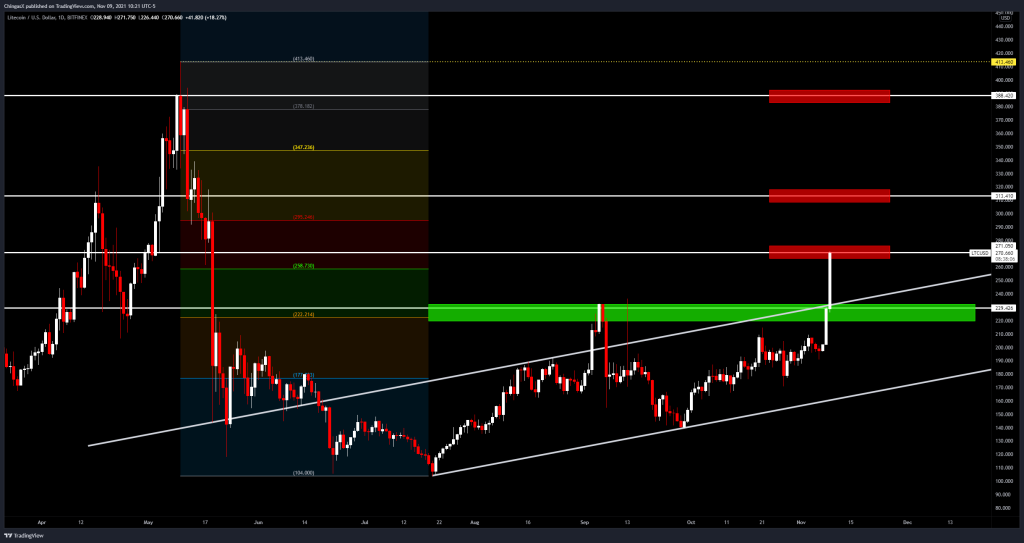