How have the last few Decembers been for Bitcoin Price Action? 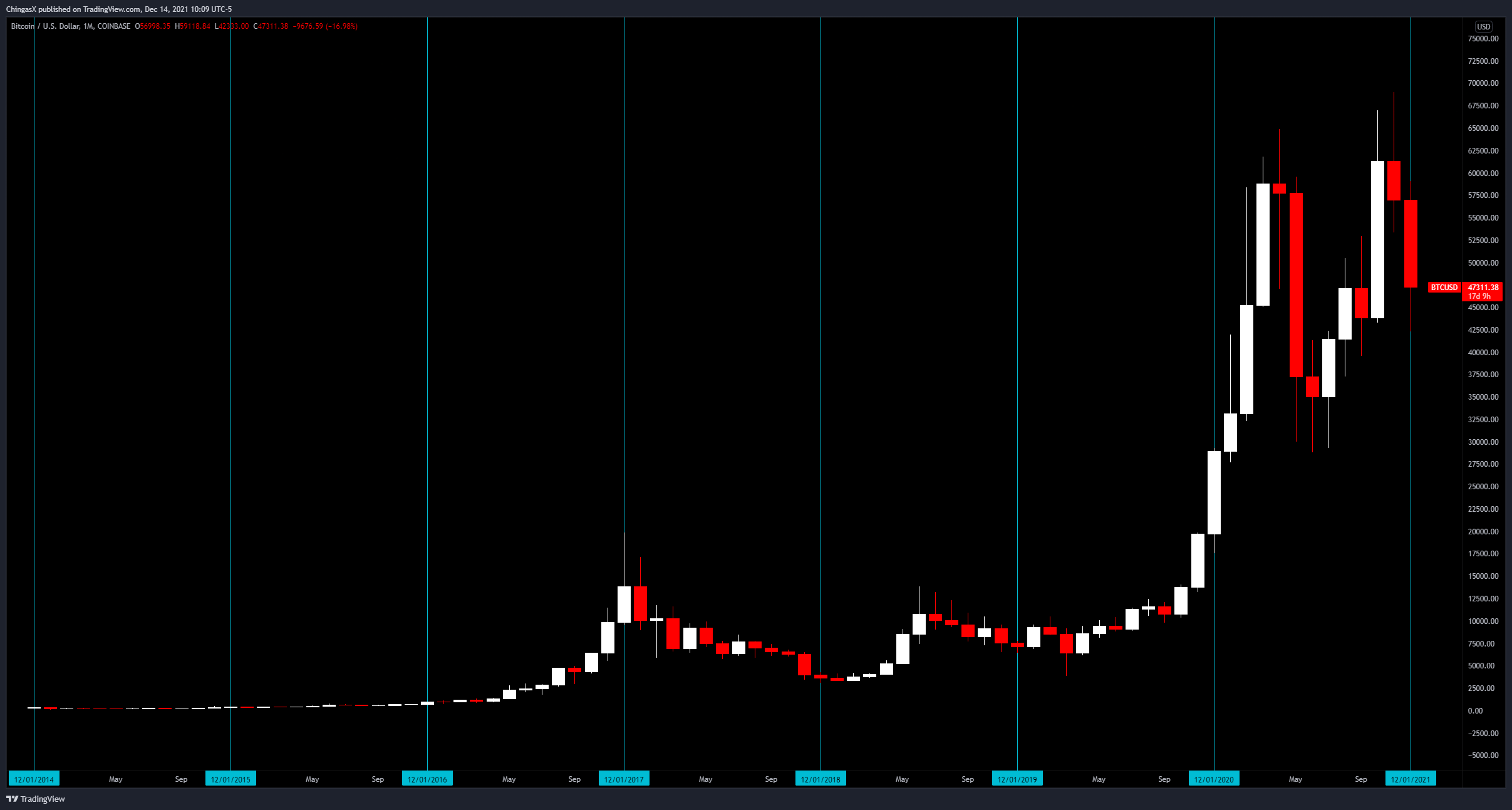 It’s always good to pull up some historical data to see the bigger picture in an assets life cycle.  Bitcoin, unfortunately, does not have too much history to pull from.  Further still, the history that it has is not all relevant due to the nature of being an emerging market.  Every year Bitcoin ushers in some new players and some new money – all of which changes the price action and the methodology of analyzing it.  This would be equivalent to adding Horse and Buggy results while analyzing the automobile market when cars first started trickling out into the world.

2014 may even be considered too early as well but at least by this point Bitcoin was around for 5 years and was listed on multiple centralized exchanges.  This is when gathering data for the Bitcoin price action became much, much easier.  So, we will start from there.

It's not just the Month - it's the Context 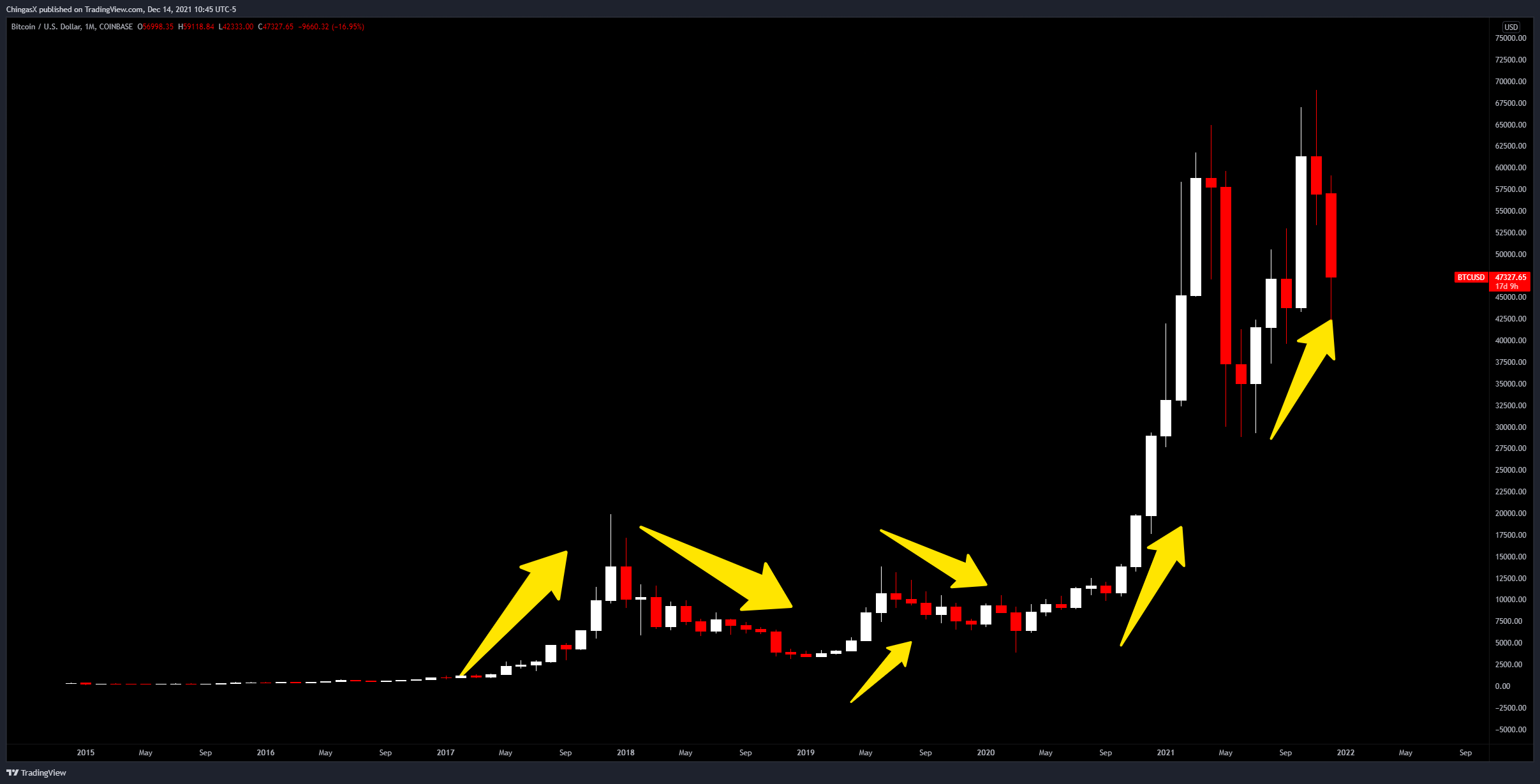 All too often an analyst will start there journey focusing on just one parameter.  This is fine as we all need a place to start.  In the case of a specific month, it’s important to realize what was happening prior to that month in order to get a better understanding as to whether December was simply going with the trend or if something special was happening to that month specifically.

This is where context comes in to play.  We need to see what the prior price action was in order to better understand if December was reactionary to the current trend at the time.

With the addition of a prior trend and sticking with Coinbase as our main historical reference – we will skip December of 2014 and start our journey in December of 2015. 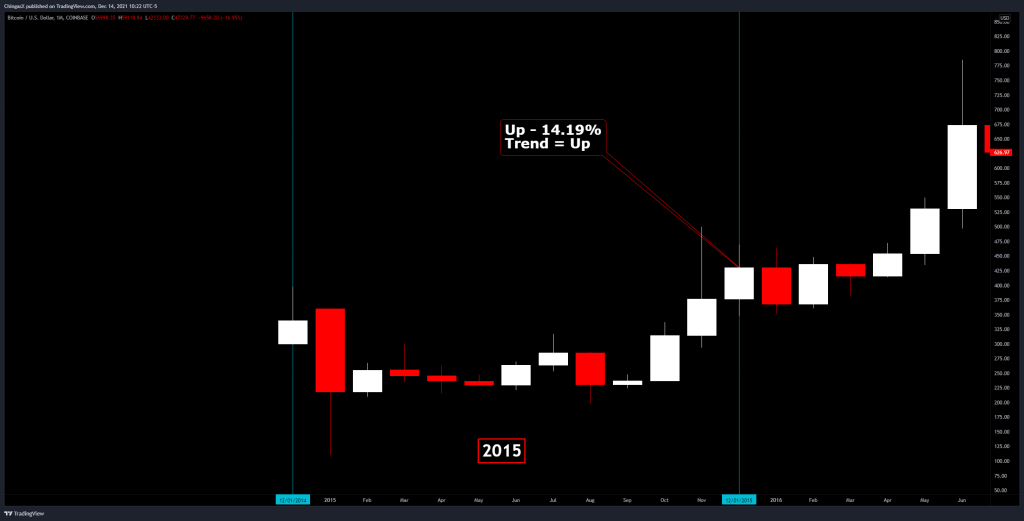 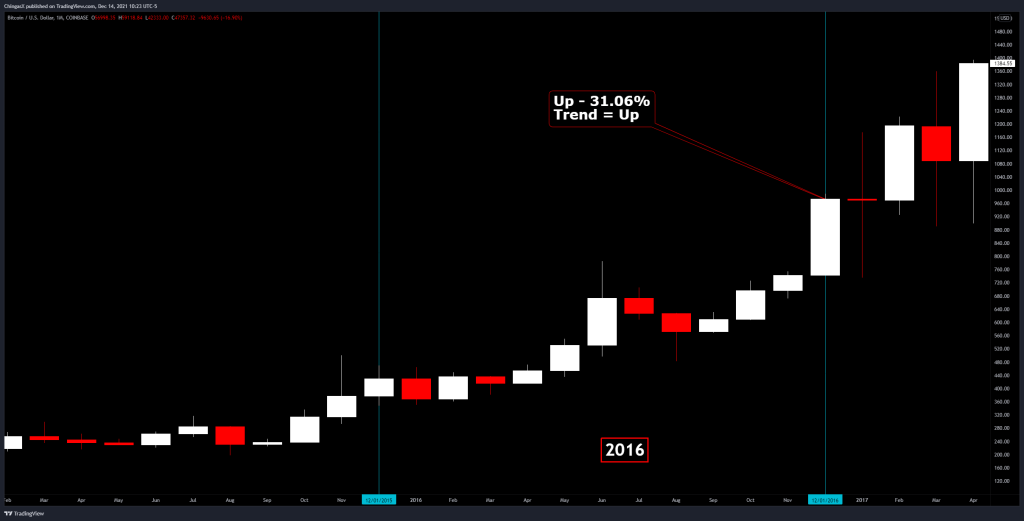 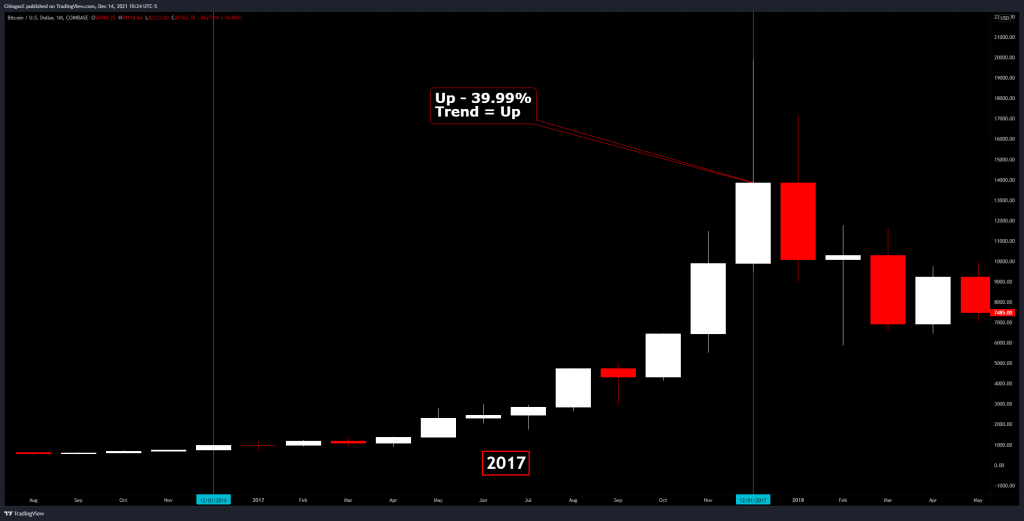 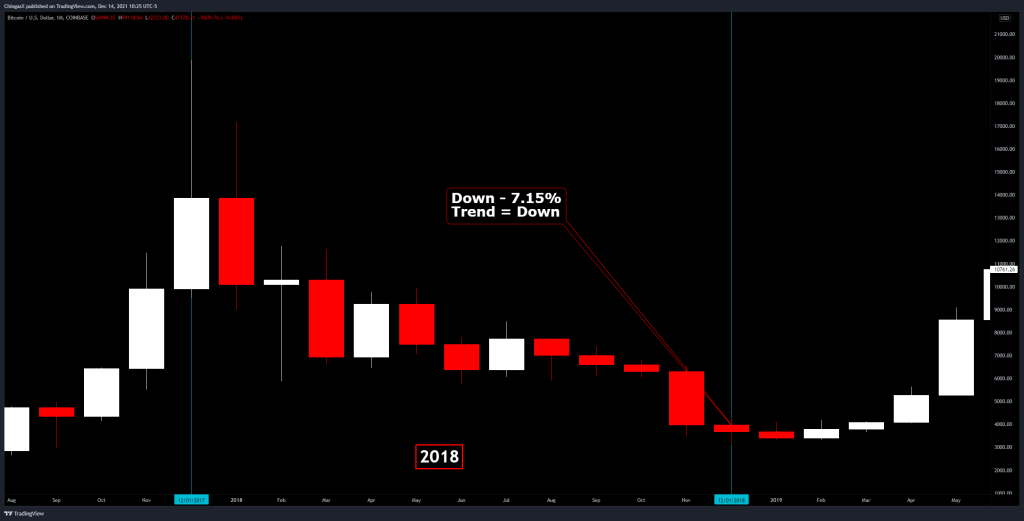 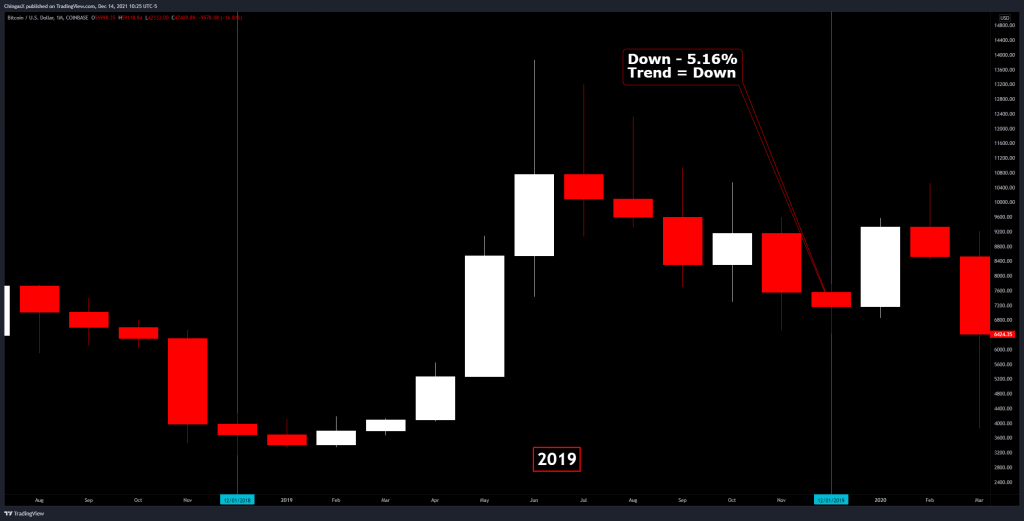 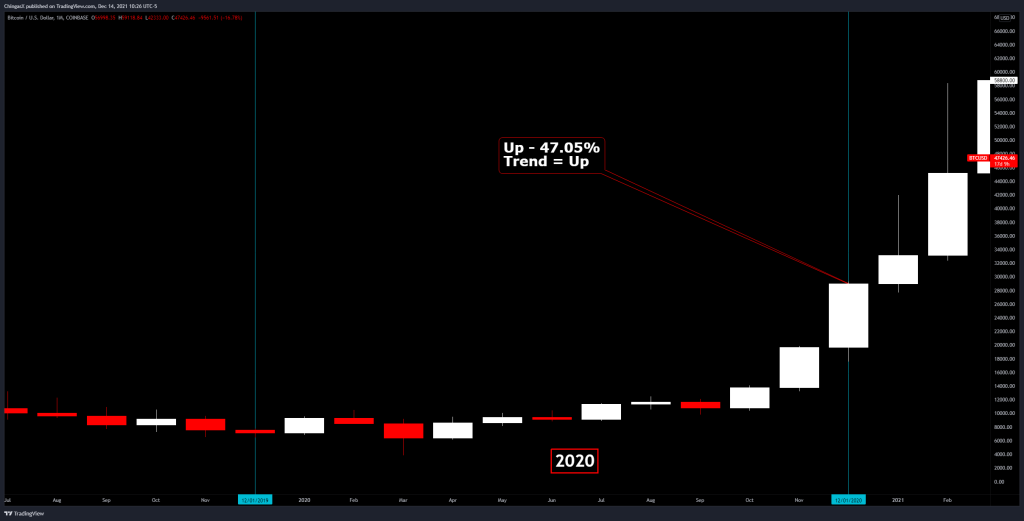 Prior Trend – UP but in a pullback

—Unknown until the month is over— 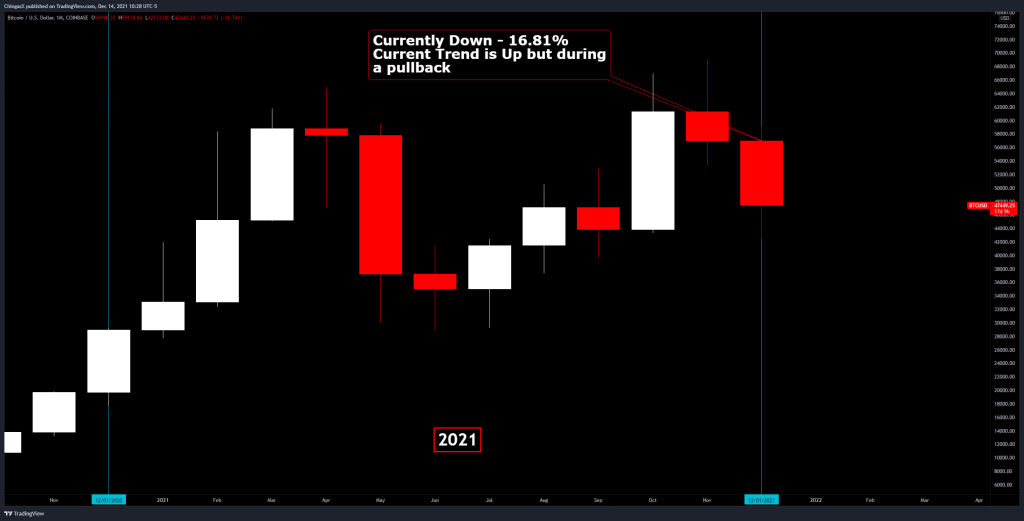 One takeaway from this is that December has always followed the prior trend.  Of course, to make life more complicated, this year is a bit of a mess when it comes to trend.  The larger trend is indeed up.  The local trend is also up given the last six months of data, however, we are currently experiencing a pullback which could very easily break the trend.

It goes without saying that this December appears much different than all the other Decembers prior to it.  If we were to go strictly off of these few data points, then Bitcoin would be poised for a positive month.  This is absolutely doable as we still have a half of a month to reverse course and push $57K – which was near the open of December 01, 2021.