The Bulls bounce appears to be short lived 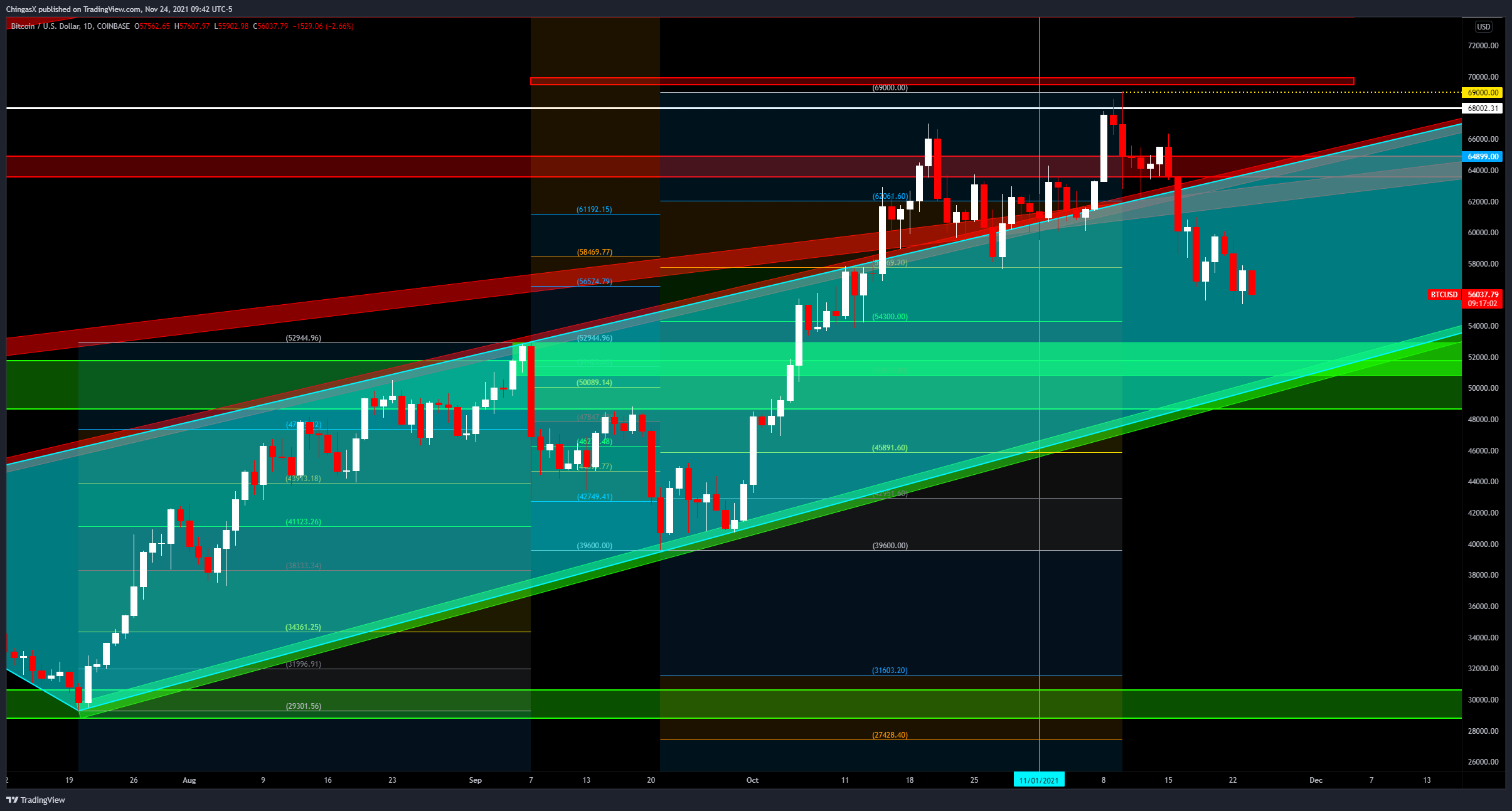 Bitcoin is now trading lower than yesterday’s open, solidifying that everything the Bulls did to salvage a loss yesterday was clearly not enough.  The Bears are running the show at the moment as they have since the ATH on November 10th.

There were some really good moves in the market yesterday but a move like this from Bitcoin is usually enough to stifle any of yesterday’s gains or momentum.  Where for a week AVAX was bucking the system against BTC, now AVAX is fully cooperating and at a significantly higher acceleration than Bitcoin.

All hope is not lost tho, Bitcoin can indeed hold these lower levels as it has 3 of the last 5 days.  The real problem is what happens tomorrow?

Tomorrow is Turkey Day in America.  Traditional Markets will be closed and so too the traders and investors who have also started moving around Bitcoin in the last 6 months.  American Traders will likely step away from their computers for the first time in a year to try to remember who their family and friends are while they smash their faces with mashed potatoes and Turkey.  So where does that leave Bitcoin?

The Good News – Crypto is Global and will carry on regardless of who is open and who is closed.  The Bad News – American money does have some interest – especially at certain times of the day when other markets are in their off-hours.

We have identified two potentials that we want to talk about below.

ROSE: Oasis Network (ROSE) is a privacy-focused layer 1 blockchain built for open finance and a responsible data economy using the Cosmos SDK. That will allow Oasis to interact with the ecosystem of the Cosmos (ATOM)-enabled blockchain when its Inter Blockchain Communication Protocol launches. Oasis prioritizes use cases that promote data privacy and user confidentiality and aims to power private, scalable DeFi and expand it beyond traders to the mass market. Oasis achieves high throughput and boasts a secure architecture by separating the contract settlement and consensus layers. This separation of layers allows the blockchain to support multiple, customizable runtimes (ParaTimes). It is similar in its architecture to the structure of Avalanche or Polkadot, connecting several different blockchains within one ecosystem.

ROSE has been around for a while and has been doing some really interesting stuff lately on the charts.  Rose made a new ATH on September 7th, 2021, and just recently challenged that high and made a new ATH.  This cycle has been seen before from some other assets and has a potential for some big gains.  We like $0.58 as the first price discovery area of resistance and then the second all the way up at $0.91.  As always, we like to see some confirmation that this is not a fakeout move. 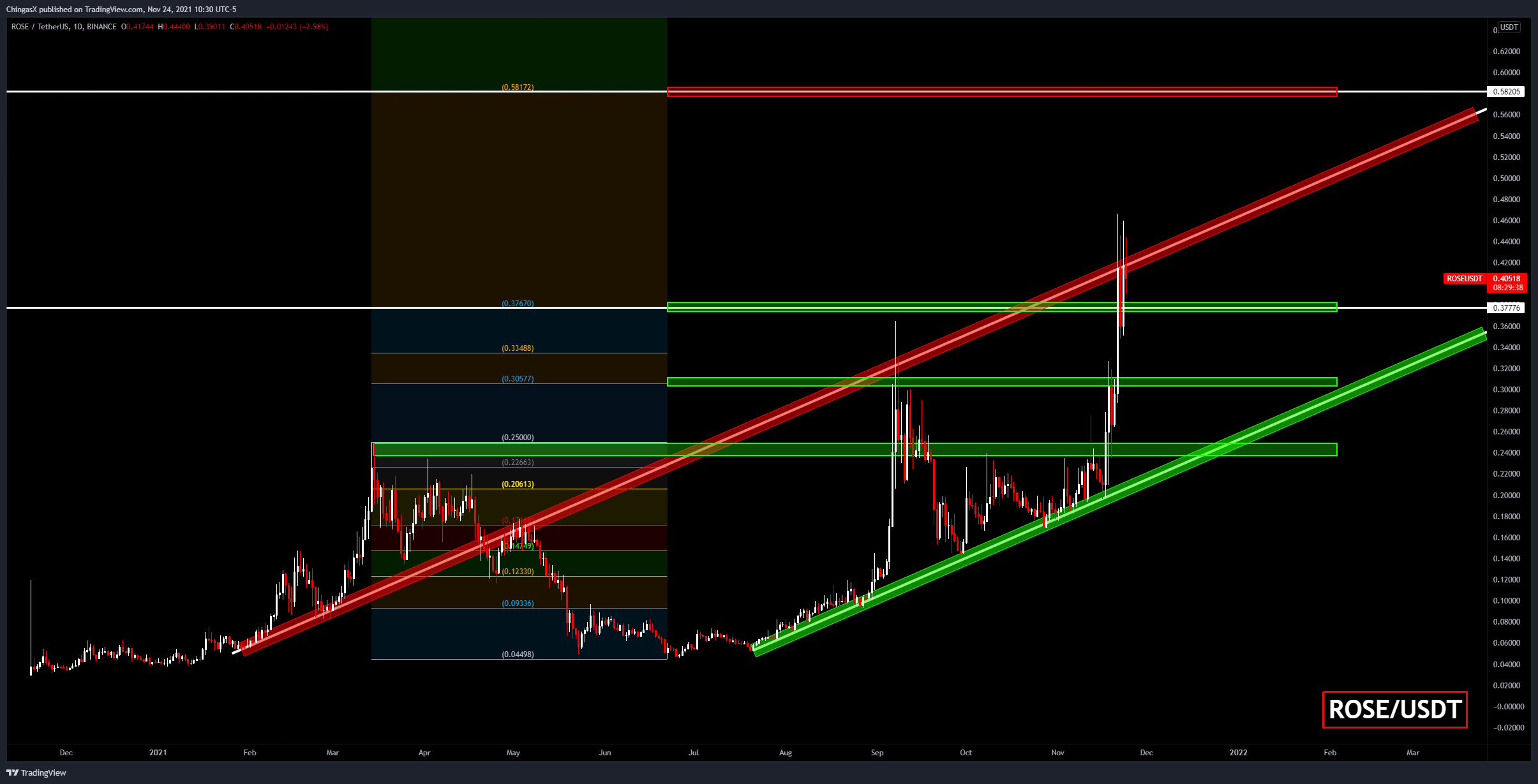 TVK was able to break the $0.3700 area today once again.  This will be the third time in a few days but with the target being so close, it’s a tough call for confirmation.  The current candle is up 20% so that would make this play a quick one for the day traders.  Scooping some up on local short-timeframe dips and pushing to local targets only.
The bigger picture can see TVK into the $0.8300 zone which would be a 100% move from todays open. 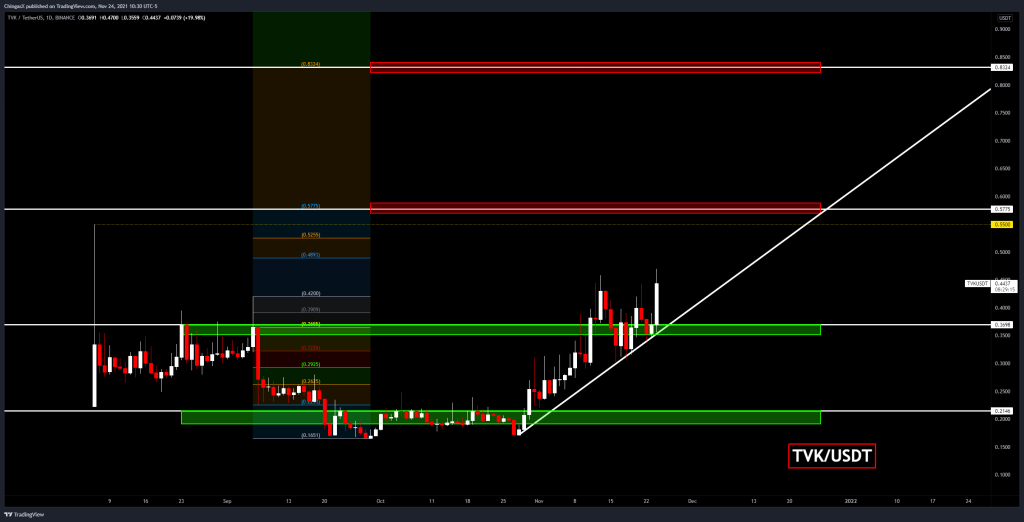 Newest | Active | Popular
See all
Bitcoin Giving It All Back