In a nutshell, Cosmos bills itself as a project that solves some of the “hardest problems” facing the blockchain industry. It aims to offer an antidote to “slow, expensive, unscalable and environmentally harmful” proof-of-work protocols, like those used by Bitcoin, by offering an ecosystem of connected blockchains.

The project’s other goals include making blockchain technology less complex and difficult for developers thanks to a modular framework that demystifies decentralized apps. Last but not least, an Interblockchain Communication protocol makes it easier for blockchain networks to communicate with each other — preventing fragmentation in the industry.

Cosmos’ origins can be dated back to 2014, when Tendermint, a core contributor to the network, was founded. In 2016, a white paper for Cosmos was published — and a token sale was held the following year. ATOM tokens are earned through a hybrid proof-of-stake algorithm, and they help to keep the Cosmos Hub, the project’s flagship blockchain, secure. This cryptocurrency also has a role in the network’s governance. -CMC

To sum up Cosmos we can say that they have two major priorities:

Both of these priorities are major issues in the entire Crypto Market and Cosmos has been working hard for years to find solutions. 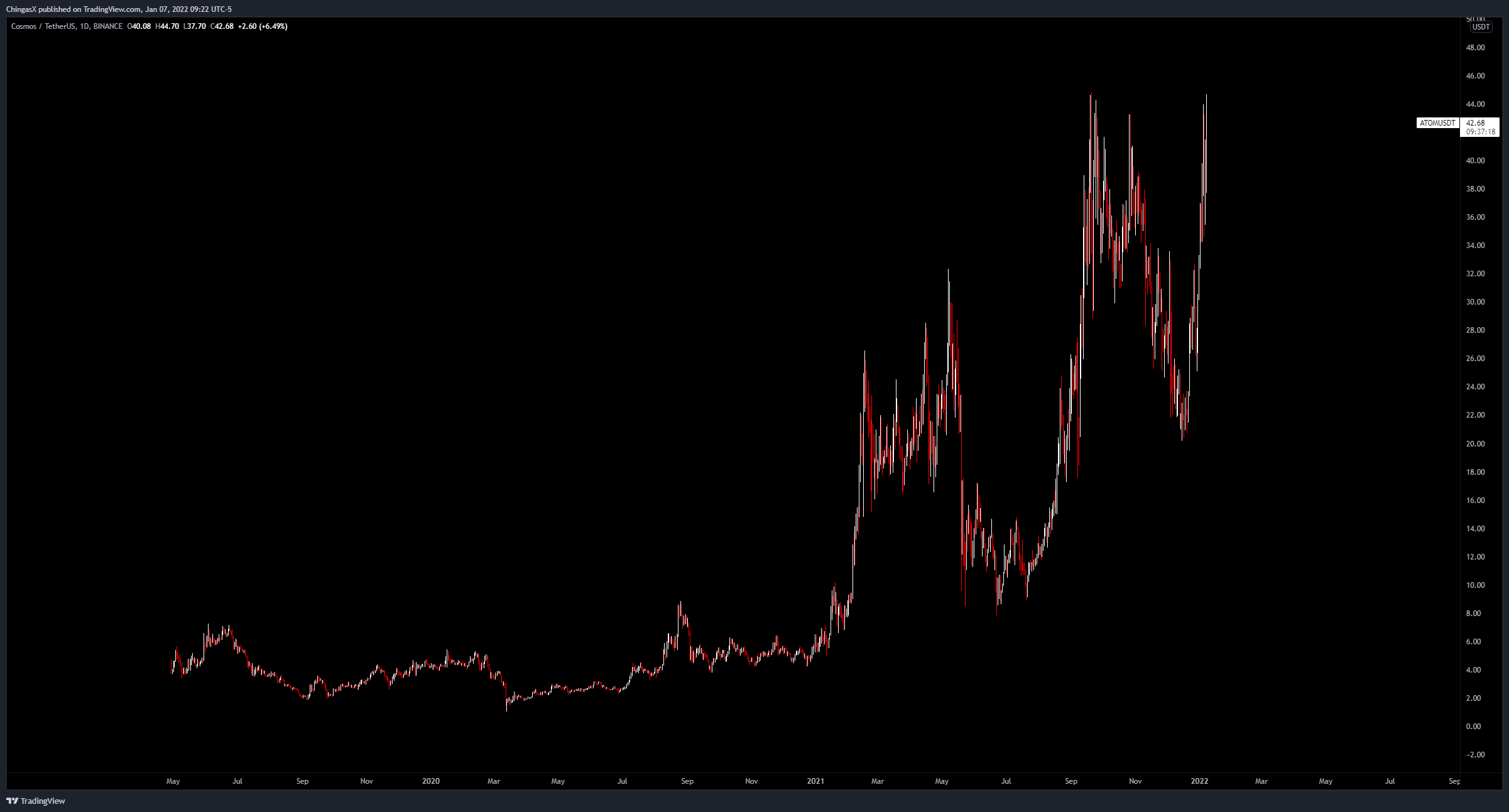 ATOM broke its initial ATH in August of 2020.  This was far earlier than the April/May 2021 for most other Crypto Assets.  But ATOM didn’t stop there.  After consolidating for a few months, ATOM started a new rally in December of 2020 that went until early May of 2021 and produced a 665% gain from the lows to the peak.

A Swing-Fail from the new ATH was produced in October when other assets were making their newest ATHs.  This is the Resistance that we will focus on today. 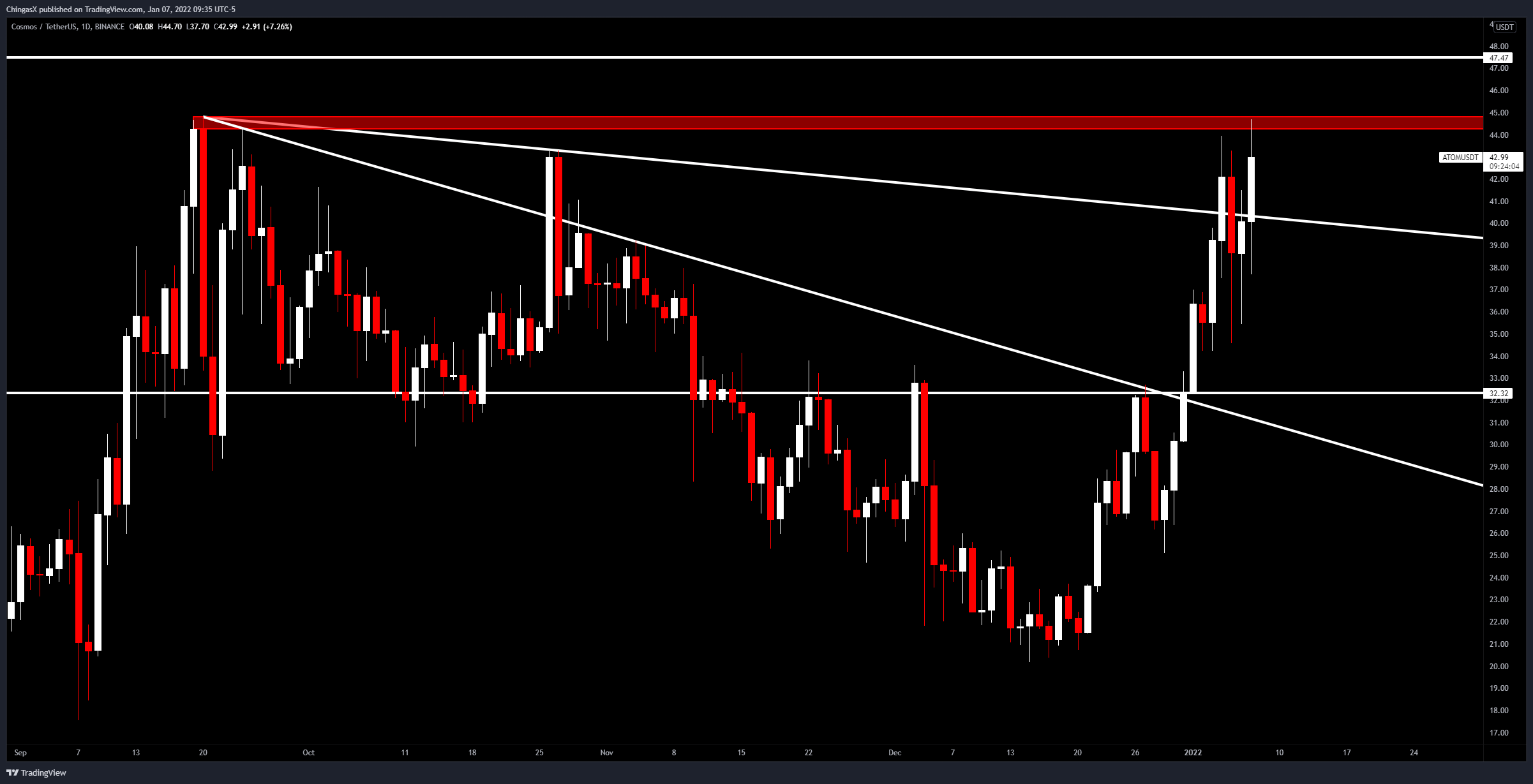 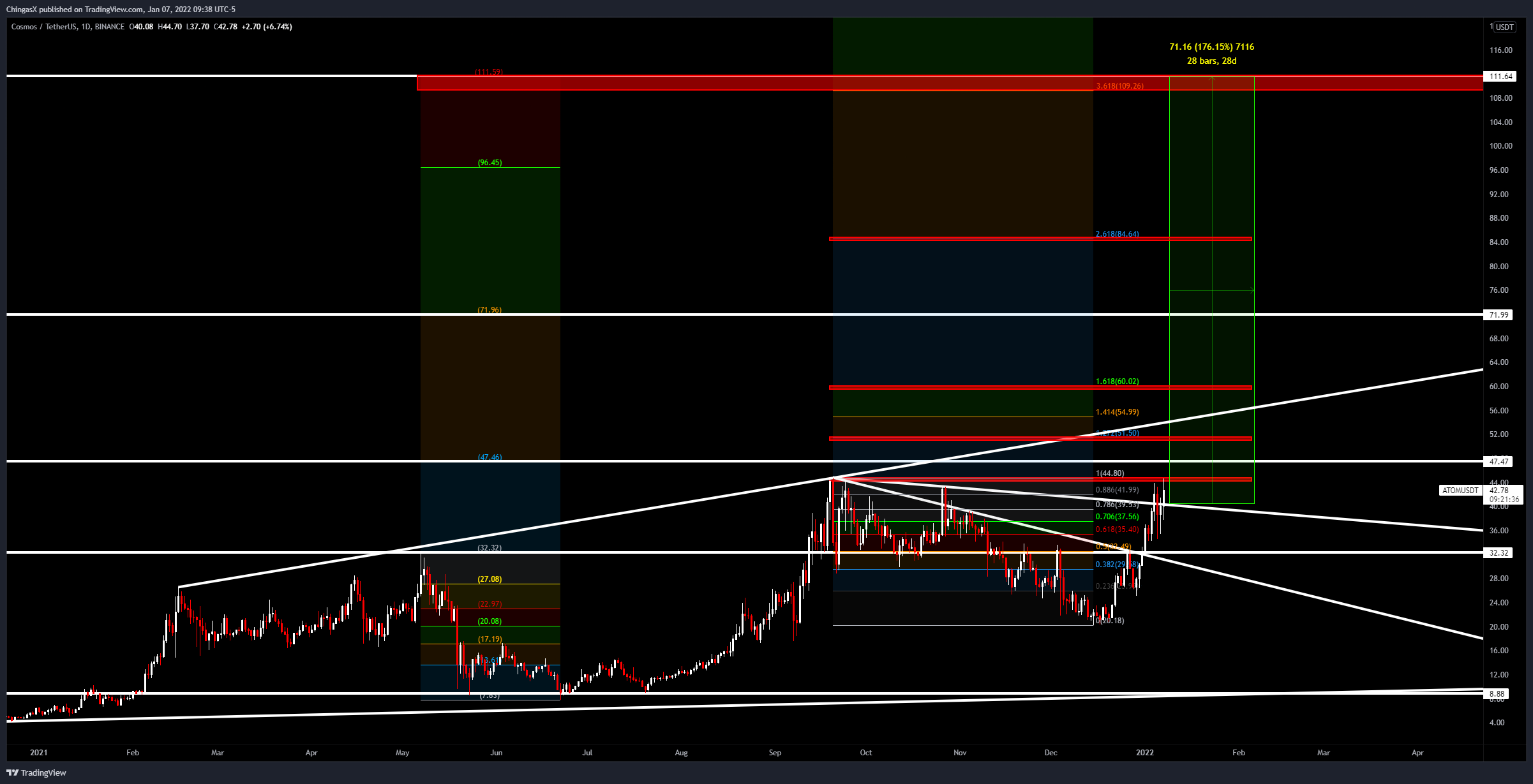 A Swing-Fail is when an asset fails to continue in a trend either after making a new High or a new Low.  ATOM made a new ATH and then pulled back.  After the recovery, its next attempt to break that high was a failure.  This was the initial Swing-Fail.  After about a month of consolidating, ATOM tried again to break its previous high but once again failed to break the level.  Both of these Swing-Fails are important and you can see them both in the top chart.

The first Swing-Fail did act as resistance and was a perfect pullback area after the beginning of this current rally.  The newer Swing-Fail is where price has been for the last four days.  This is the confirmation for this rally.  The unfortunate news is that the Swing-Fail resistance is now almost coinciding with the previous High.  So, there is confluence for resistance and ATOM needs to get through both of these levels before it can go on to Price Discovery.

If there is enough momentum to prevent a Double Top and move on to another new ATH then we have a level we like with confluence in the area from two other observations.  ATOM to $111 involves a lot of potential Price Discovery Resistance areas and will need to be a very strong rally in order to achieve those levels.  Every level along the way is enough to derail the action and the greater crypto market can always step in and ruin the party. 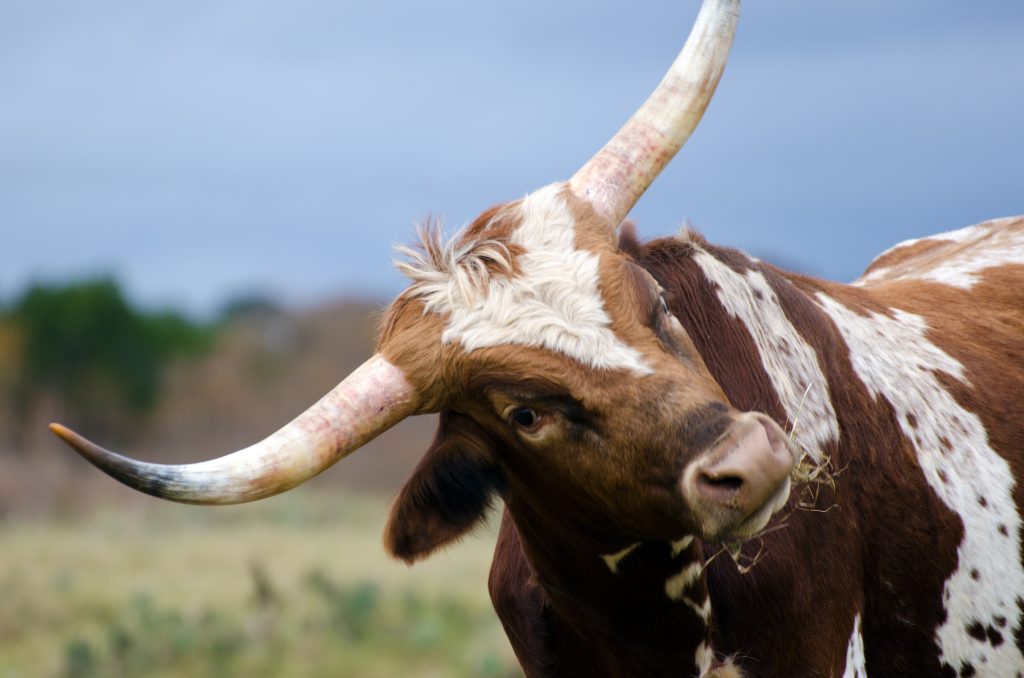 The Bulls bounce appears to be short lived Bitcoin is now trading lower than yesterday’s open, solidifying that everything the Bulls did to salvage a…

Newest | Active | Popular
See all
All about ATOM