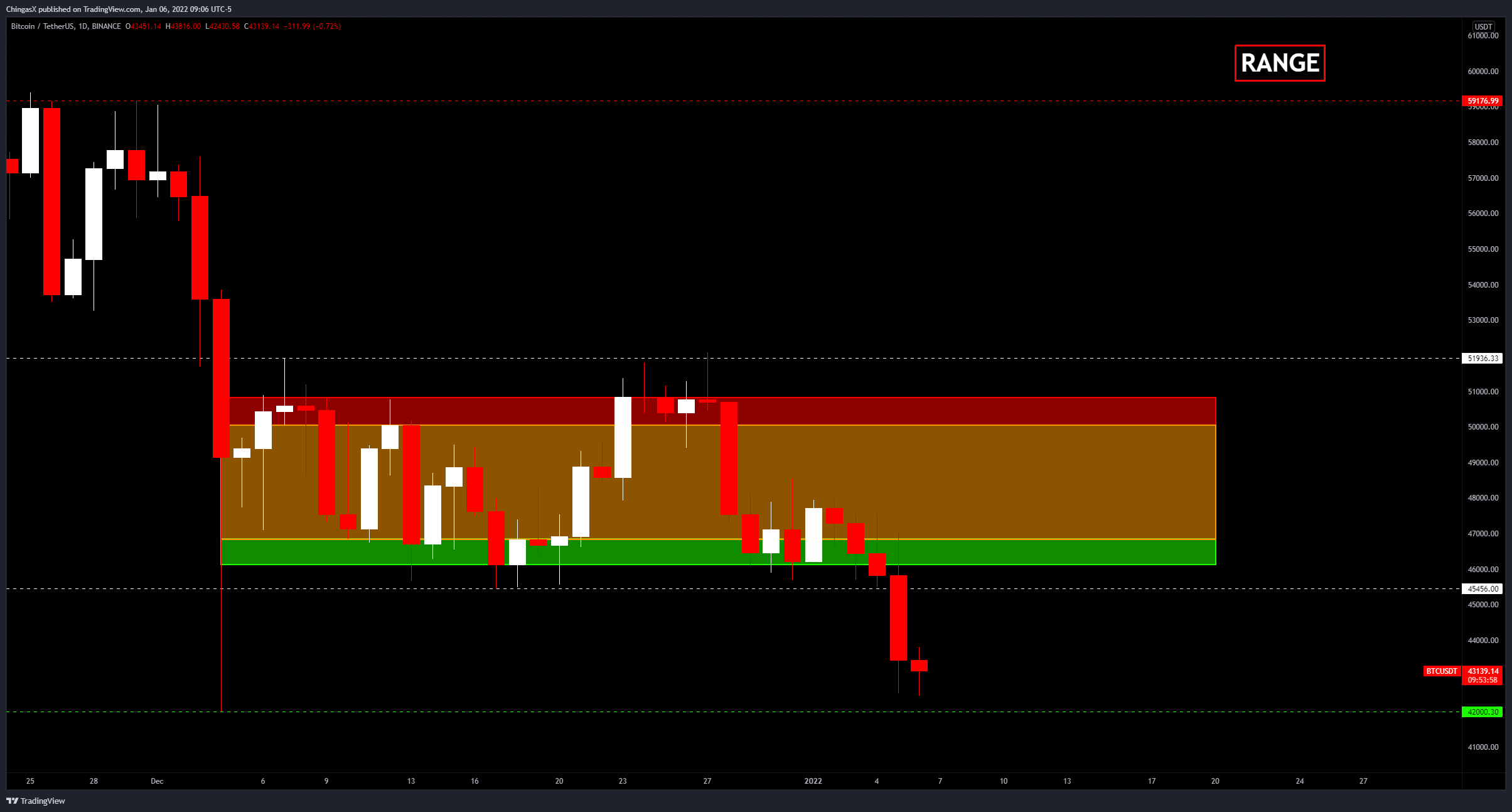 Bitcoin was clearly listening yesterday as we talked about Range because it picked yesterday as the day to step outside of Range and start heavily trading below it.

You’ll notice in the chart above a faint Green Line and a faint Red Line.  These represent extremes.  They are not part of the range but rather an extreme level reached prior to Range forming.  The High Side is the Support level that flipped to Resistance prior to Range but the Low Side is the initial wick that is left over after the Bitcoin and Market dump back on December 4th.  Back then we mentioned “filling the wick” and that is essentially what happened yesterday.

Here is the excerpt from the Dec 5th aftermath. “Earlier this week Bitcoin was trading at a peak low of 34.62% from it’s ATH.  Some things in crypto simply never change and a big ol Bitcoin dump is just par for the course.  Bitcoin was able to get a liquidation pump on the low side but wicks like these are generally filled.  That means that further downside would be expected over the next few days to fill out that wick and allow the Buyers to actually buy those areas.” 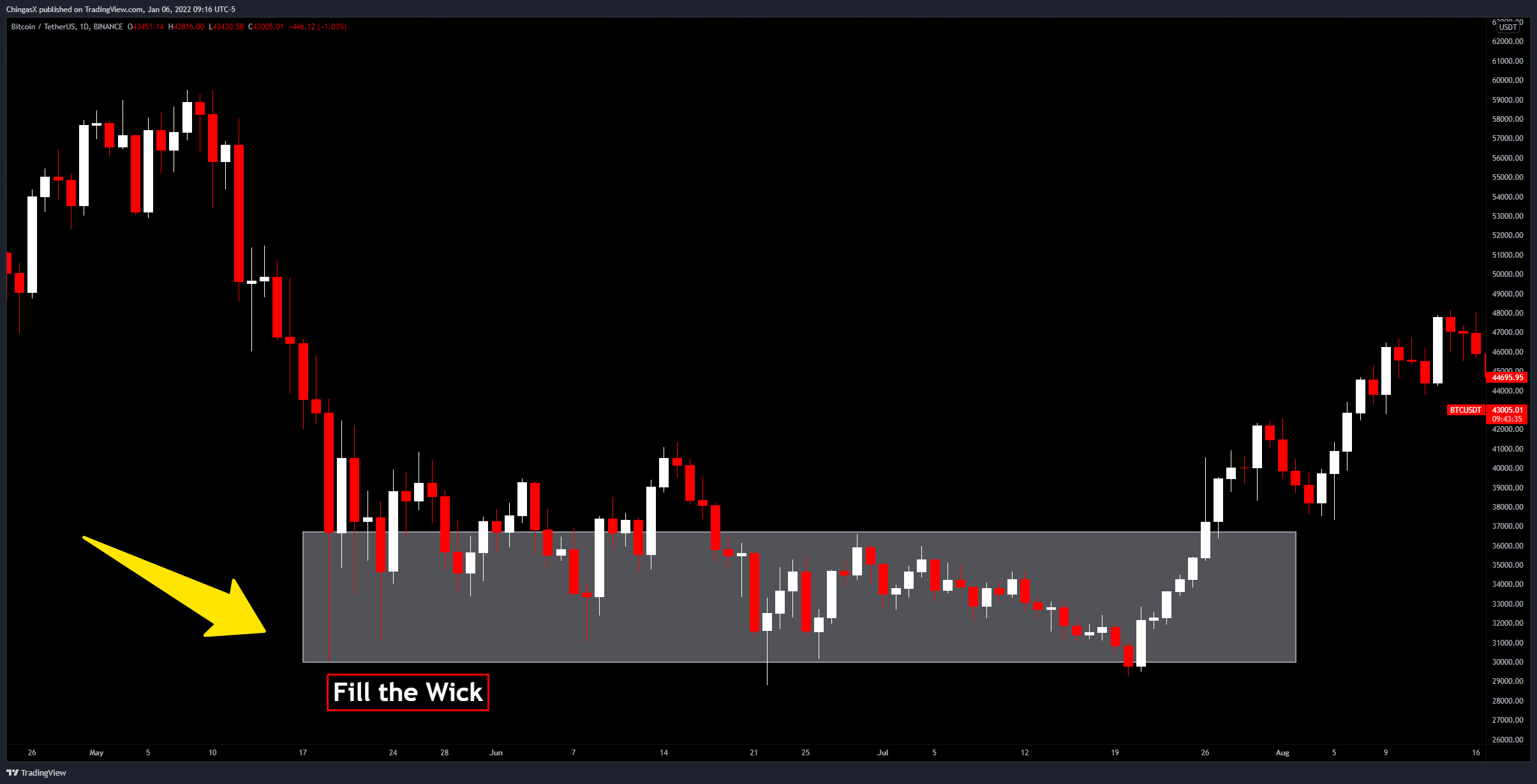 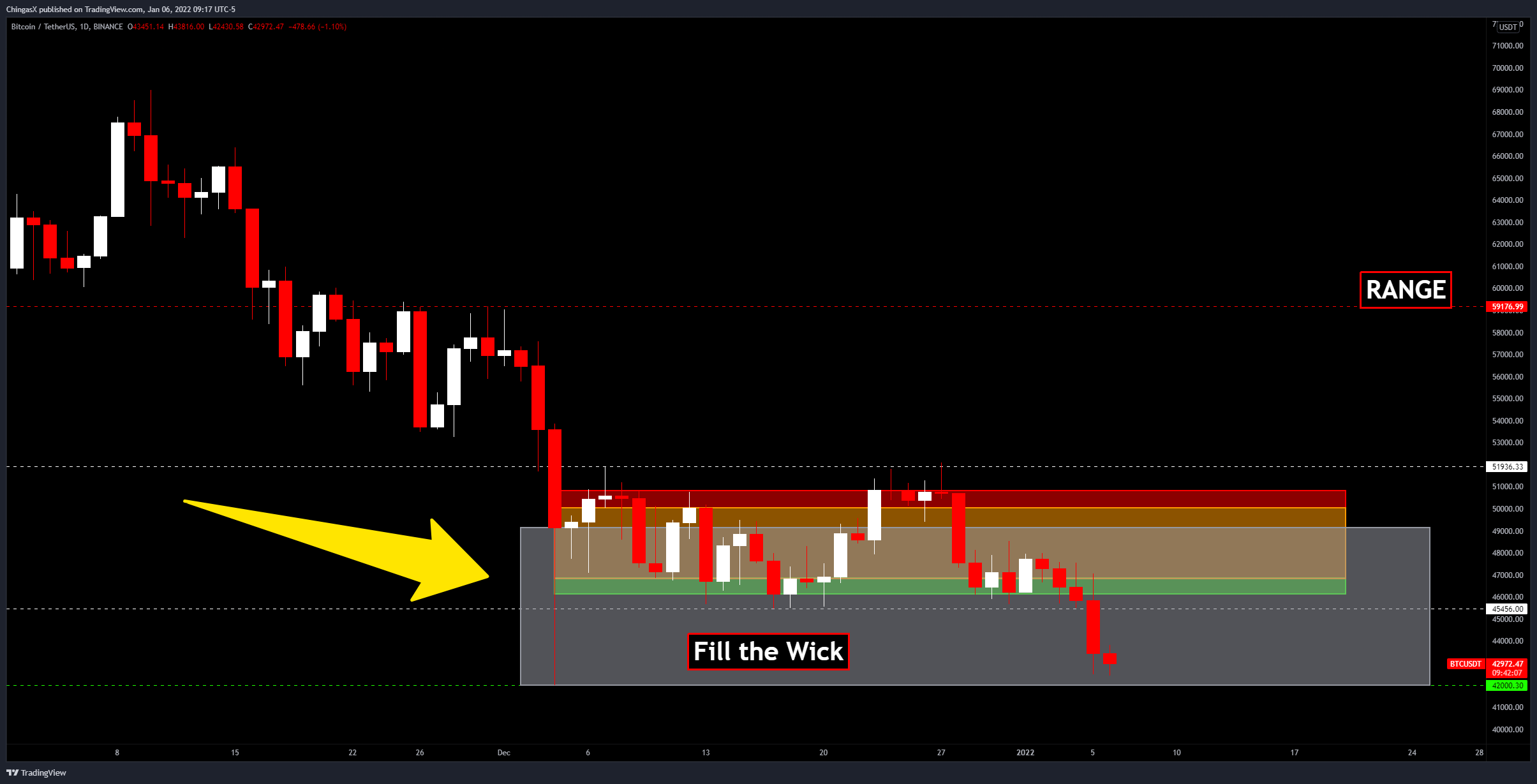 Large wicks tend to get filled.  It’s not exactly a saying that is used often but for those of us trading Crypto for a few years, it’s pretty common.  The first chart above is Bitcoin back in May when it dropped 53% from its rally high – the new ATH at the time – $64,854.  The dump on May 19th sparked a Market wide selloff which affected nearly every one of the 10,000+ tradeable crypto assets.  The Wick alone is a loss of $6690 which stood for an 18% loss.  After trading sideways for a few weeks, Bitcoin broke range and came very close to filling the wick.  What it didn’t get done that day, it got done two weeks later when Bitcoin briefly traded below the May 19th Low.  This area was tested one more time before going on a short 10-Day rally that had Bitcoin trade at levels unseen since May 19th.

The lower of the two charts is the current Bitcoin Price Action.  Yesterday we officially broke range and came very close to trading near the bottom of the December 4th wick.  This marks the first time we have traded this close to the December 4th sell-off, since December 4th.  If we see similar price action from May then we are only have way to a reversal, which means at least another 30 days of hanging in there. 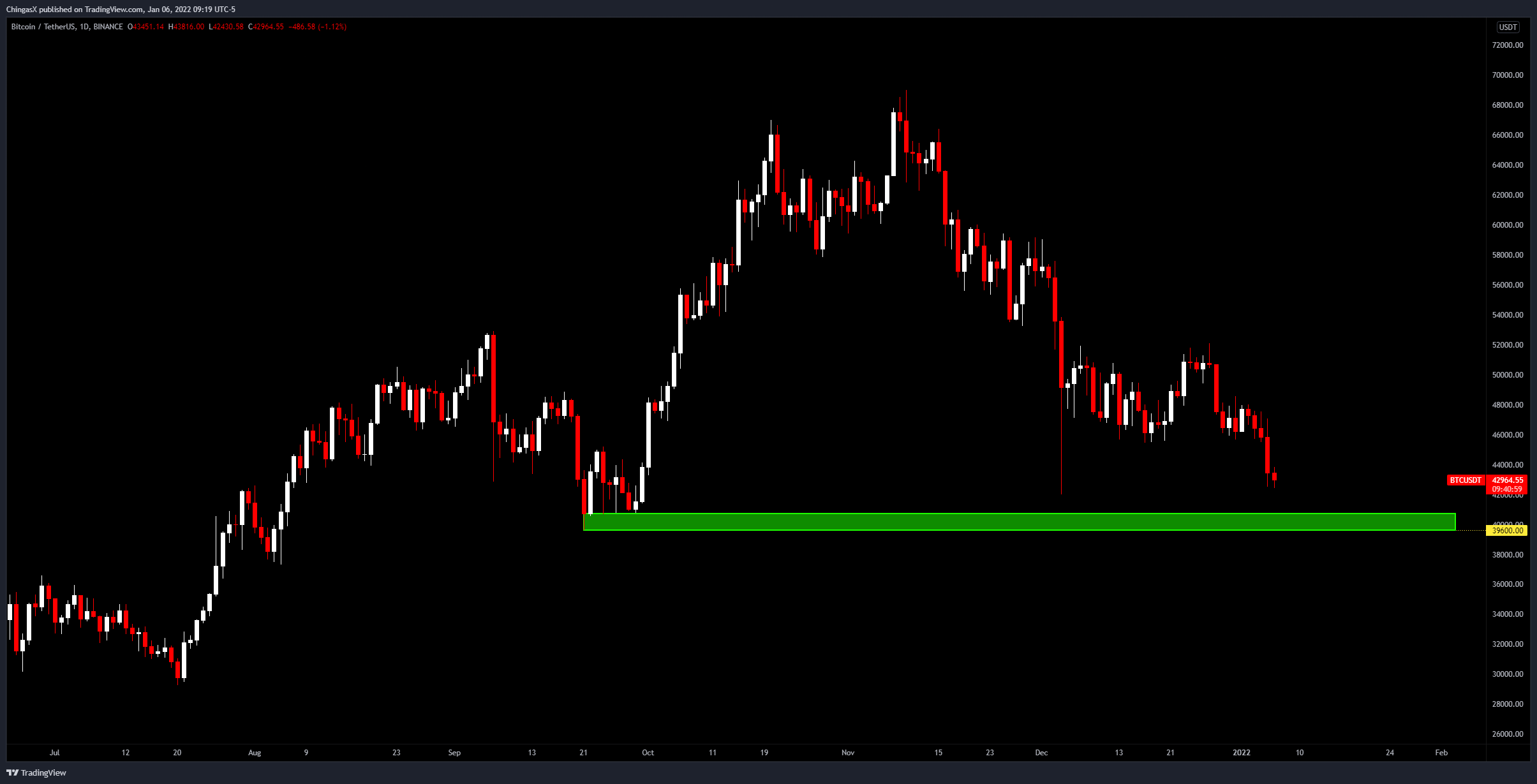 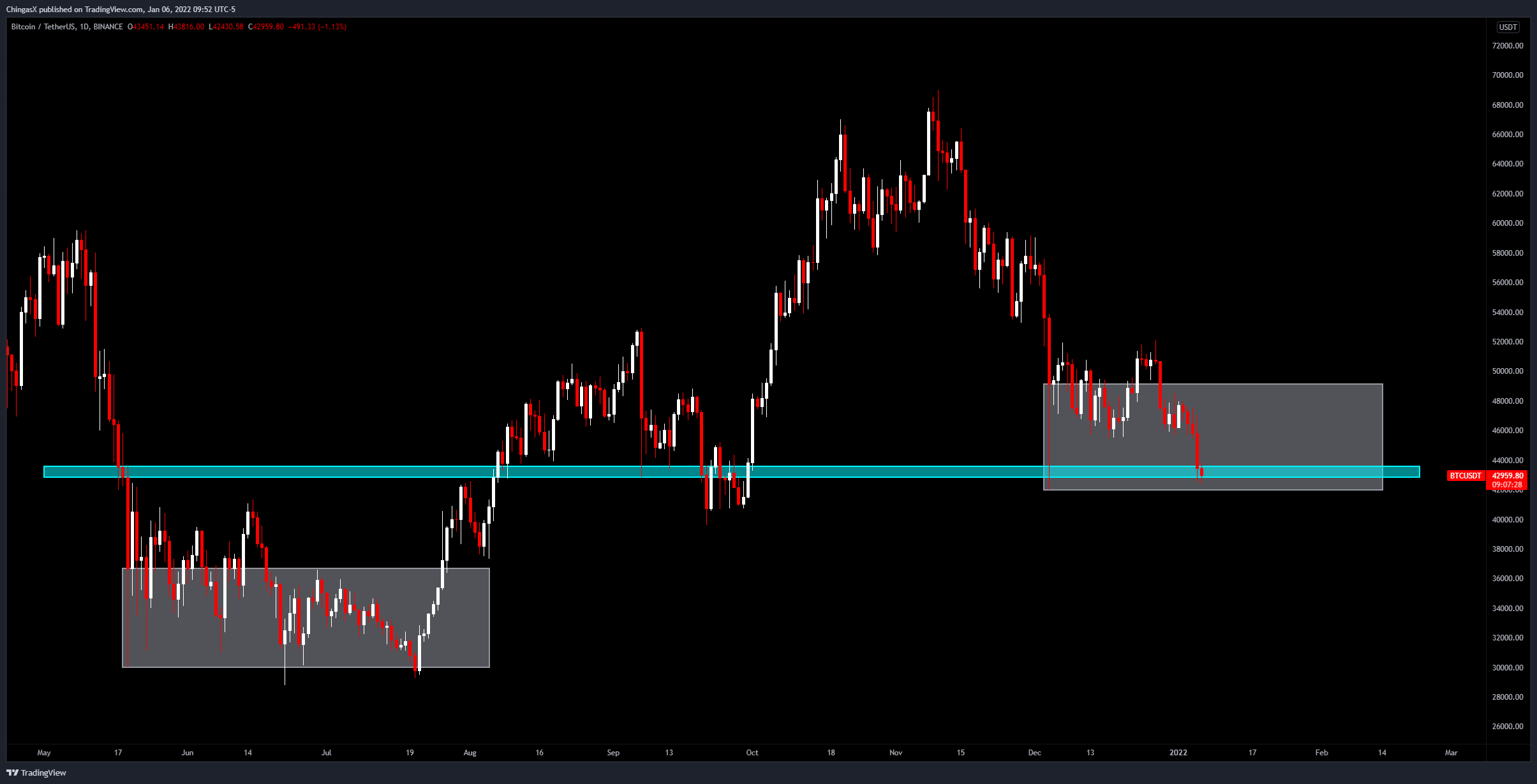 What makes matters even more interesting is the low-side levels.  This isn’t just any random level on the chart.  At first you will notice that these levels are very close to the previous Structure Lows from the larger trend.  But then if you look a little closer you will realize these are the same levels as the Open and the High of the May 19th Sell-off candle.

This makes for a very interesting level and one that ranks as Top Priority for the Bulls and the Bears given he current Price Action.  The Winner of these levels here determine the outcome for Bitcoin for the near future. 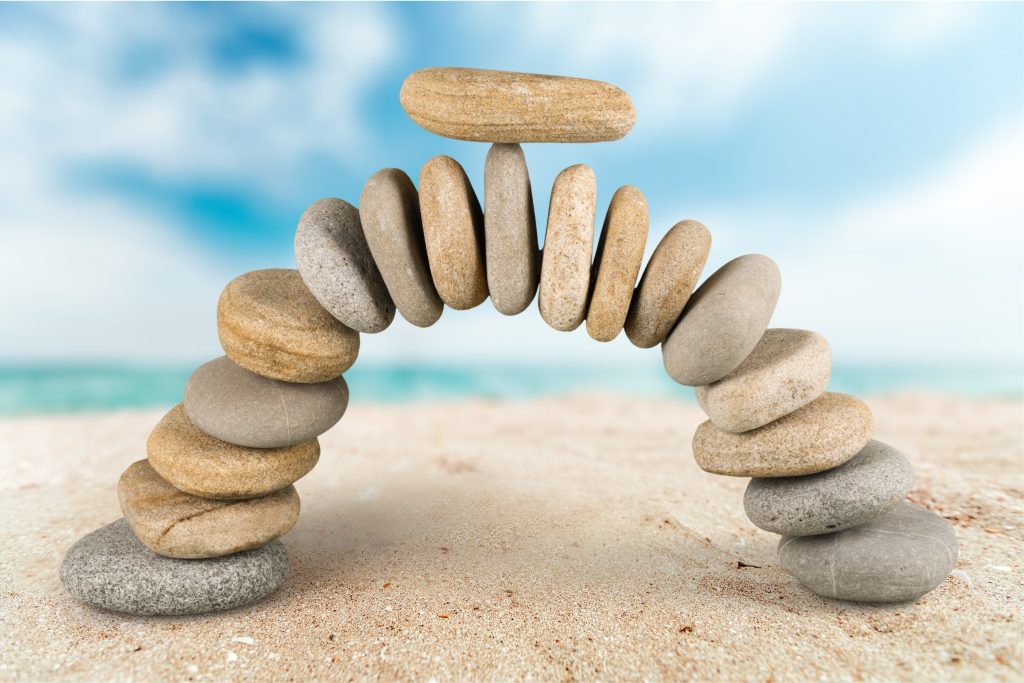 BTC Drops $3K – again Like history repeating itself all over again.  Everyday is another dump day for Bitcoin or at least a weak bull…